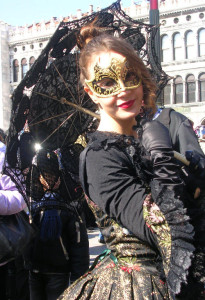 The Venice Carnival is going to start again pretty soon and this year it is going to be all about Wonder, Fantasy and Nature.

When is Venice Carnival on?

From 15th February till 4th March 2014 it will be a real International Carnival, because the theme is centered around the heritage of fairy tales and folk stories which every country in the world has. So, pick you costume, get your mask on and come and enjoy an array of colors, sensations and sounds in the most beautiful city in the world.

The objective will be to encourage party goers to rediscover, through their costumes and through the masked city, the importance of fantasy, both popular and cultured, esoteric and didactic, and its relationship with humankind and the environment. A gateway between the East and the West, where myths  and fears  of overseas monstrous and surprising creatures were translated into tales, paintings, decorations, to be exported to Europe along the canals and the roads scoured by merchants.

During the 2014 Carnival, a huge fantasy dictionary will be represented in Venice: each mask will become a symbolic material trace of an alluring meeting of space and time, where in some place of our history one or more human beings have conceived a myth and turned it into image and narration. A timeless fantasy dictionary, a huge morphologic map of unbound human creativity, pleased to explore nature and its mysteries, to represent it with shapes, sounds and attitudes, freely travelling in the heads of our ancestors and in those of our children. 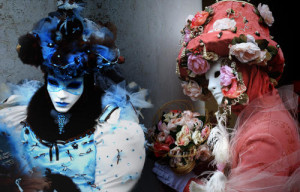 Check out all the calendar of events which will be on offer.

SAINT MARKS SQUARE
Daily parades
Every day a company of multilingual comedians will liven up the two morning and afternoon parades, where the best masked costumes will defy each other to win the traditional Best Masked Costume contest. Contestants will be selected by spectators who will then vote and may take their favourites to victory. Every day two winners will be selected to go straight to the Sunday finale. The winning style will clearly be the one that pays homage to Fantasy Nature, a recurring theme in the comedians costumes which will be inspired by the animal and vegetable fantasy world.

Entertainment, Clowning and Street Theatre
During each parade up to three entertainment companies will perform in street theatre shows, clowning, music and dancing. The shows will be selected according to their consistence with the theme and their purpose will be to liven up the square and involve the spectators. The selected shows will target all audiences and they will also be viewable from afar.

Lunch-Time Music Entertainment
Between 1pm and 3pm the square will be animated by a music and dance performance inspired by the world of nature and fantasy tradition. 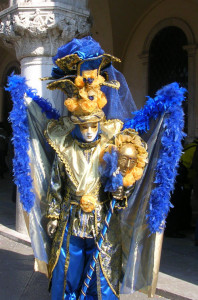 VENICE PHOTO OF THE DAY!

Venice from Above By Val de Furrentes