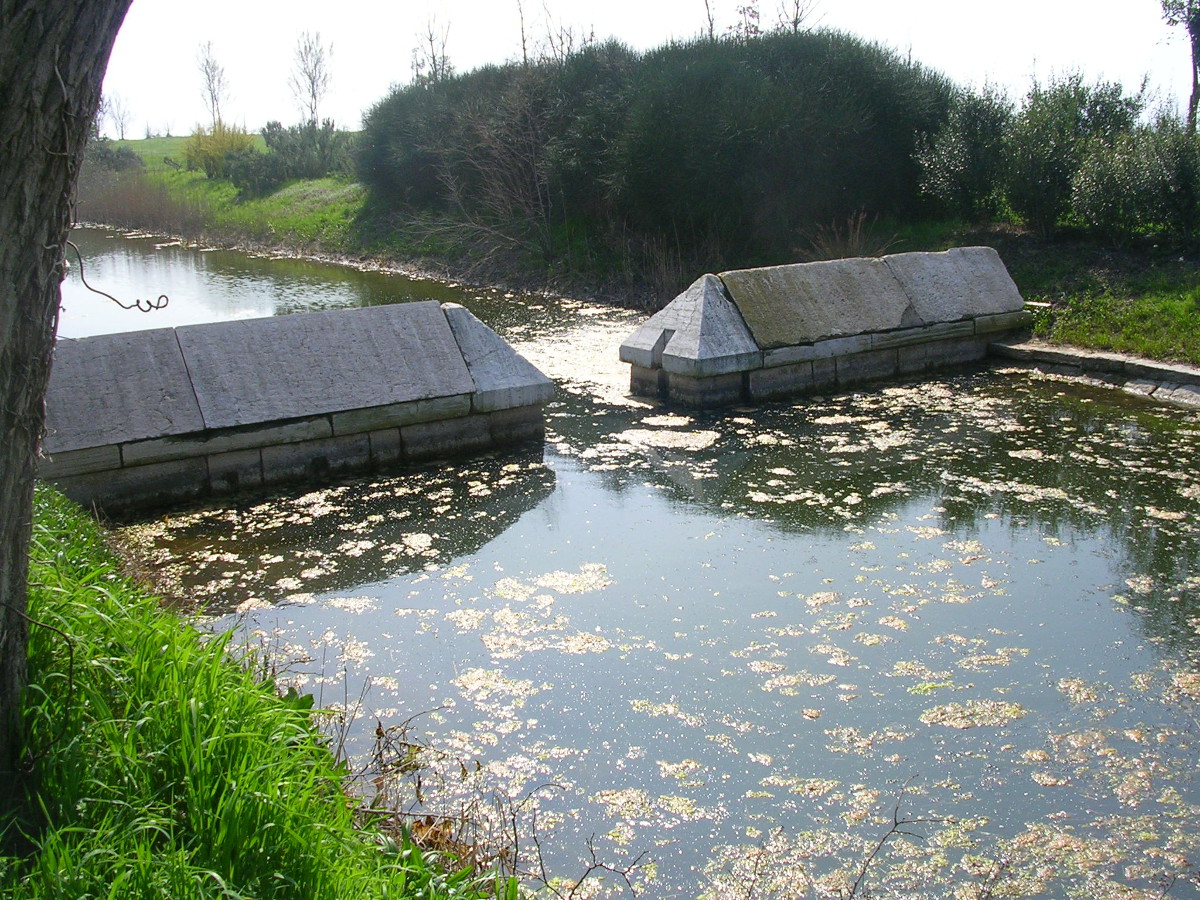 An Oasis in Venice – Sant’Erasmo

All I can hear when people talk about Venice is that the town is overcrowded, there are tourists everywhere, it is impossible to enjoy the city.

Well, this is absolutely true if, like what 95% of people do when visiting Venice, you only stick to the classic tourist routes that go from Piazzale Roma Bus Terminal or Santa Lucia train station straight to Rialto Bridge or Saint Mark’s Square.

There you will definitely be surrounded mainly by tourists, street sellers and souvenir shops. I agree, it is overwhelming and at times horrible. 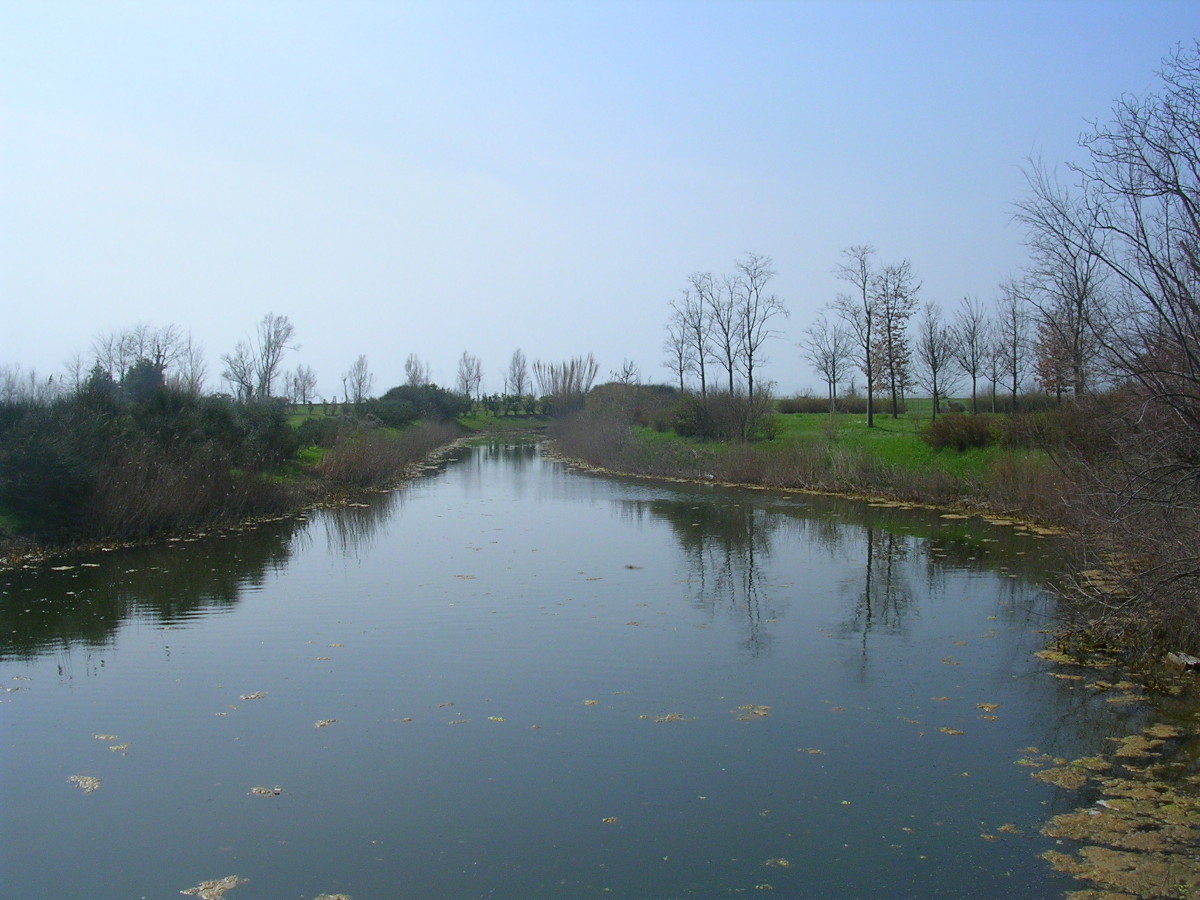 Much more to Venice….

But Venice is not only this. There are parts of Venice which tourists do not even know they exist and where the Venetians can go and take a breather, away from the noise and crowds, above all during the busy summer months.

A part from some lovely hidden itineraries in the top part of the city, like Castello or the Arsenale and the renown islands of Murano and Burano, there are other islands in the Venetian lagoon who are mainly visited only by the locals and which still preserve that unique and traditional life style which characterised the old Venice, a city of fisherman, merchants and farmers.

Last Saturday I decided to take some British friends who were here celebrating their 25th wedding anniversary (by the way, congratulation Bill and Helen) to visit one of these hidden treasures.

The day started perfectly: the sun was high in the sky, the temperature was just perfect. What can I say: the perfect Spring day. 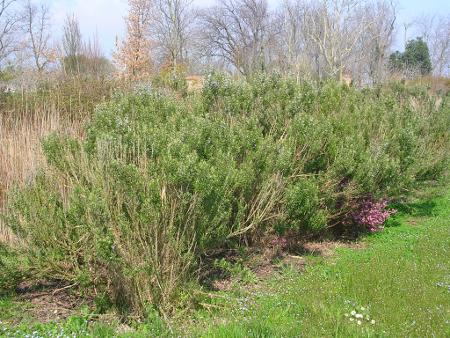 We live in Oriago, a small town in the Venetian countryside, so, at a very leisurely pace, we took the bus to Piazzale Roma and from there we took our first vaporetto towards our destination: the island of Sant’Erasmo.

I already mentioned this island in my previous post about the forgotten small islands of Venice.

So, true to my post and to show to my readers that I don’t just talk about things to do in Venice, but I actually go and do them, we boarded our first vaporetto (line 4.2) which would take us to Fondamenta Nuove, where we would exchange vaporetto and take line number 13 which would take us directly to Sant’ Erasmo.

I made sure my friends will purchase a 24h pass, so we could catch as many vaporettos as we liked and we would not have to worry about the cost or queueing for the tickets. 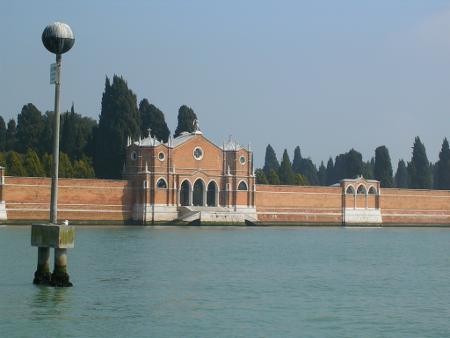 After a very lovely journey which passed in front of San Michele island (the cemetery of Venice), just as a funeral boat procession was speeding by,  and in front of Murano and its lovely lighthouse, we finally arrived in Sant’Erasmo. 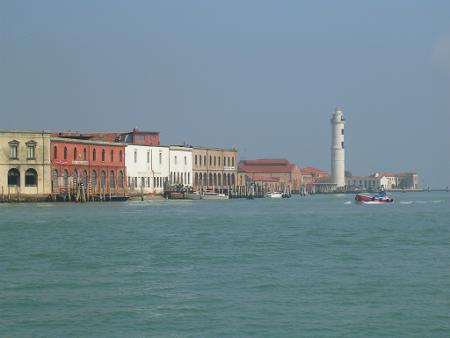 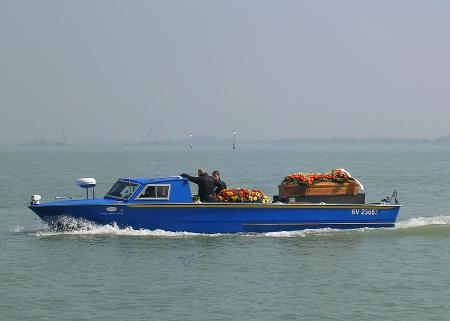 As soon as we stepped off the vaporetto, we realised that, apart from us and a few locals which were heading home after their Saturday shopping, there was none around.

The locals soon disappeared aboard their little electric cars called Ape (yes, the island is big enough for cars to run around, Cars and scooters have to be brought here on special boat delivery services) and we were left alone.

We got off at the first of three vaporetto stops of the islands, which is called Il Capannone. From here you can walk to Azienda Agricola Sapori di Sant’Erasmo, a large family run farm who produces the famous Castraure, the small Venetian artichokes.

All around us there were fields and grass and trees. The birds were singing and it looked unreal. We were in the middle of the countryside and at the same time by the sea. 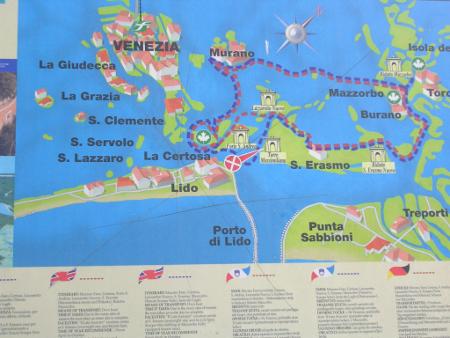 It was lunchtime, so we decided to sit by the seafront and have a quick pick-nick. After consuming our Italian style sandwiches, we decided to walk around the island following the small paths and little roads.

Sant’Erasmo is the biggest island of the Venetian lagoon after the city of Venice. The island is a long strip of land running from the south-west to the north-east of the lagoon.

Since the year 800 it was an external lido which faced the Adriatic sea. It was after the creations of the damns at the month of the port and the formation of the Punta Sabbioni ( a strip of land connected to the dry land) that the island ended up being enclosed in the internal space of the lagoon. 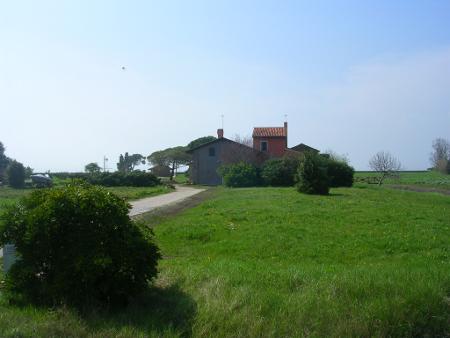 The island has always been used as a garden and a growing patch. That is why it is known as Orto de Muran– Murano’s allotment.

All around the island you can see grapevines and artichoke fields, the famous Venetian castrature (young, slightly bitter spring artichokes). The wine of Sant’Erasmo has a pleasant sea flavour. 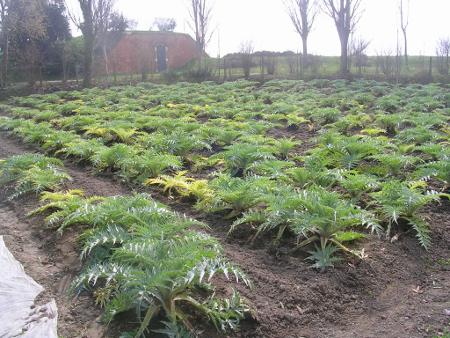 The island was also Venice’s defensive bulwark for its strategic position.

As we walked all we could see were fields, beautiful budding trees and every so often a nice local house, always surrounded by beautiful gardens.

We headed to the Torre Massimiliana, the tower of an old fort which was built between 1811-1814 by Napoleon. The tower was actually built by the Austrian in 1843, by order of the archduke Massimiliano Giuseppe d’Austria-Este.

Nowadays there are only the remains of the fort, but the tower has recently been restored and it houses the plans for a projects which aims to restore the island facilities. The design of the museum and the cultural centre into the Torre Massimiliana complex is part of a bigger plan for restoring the entire island facilities.

The tower used to be a military structure for controlling the entrance to the lagoon and had been abandoned for decades. The project aims to reconstruct the complex system defined by the Massimiliano Tower, its embankments, the docks, the beach and the farmlands insinuated between these elements. 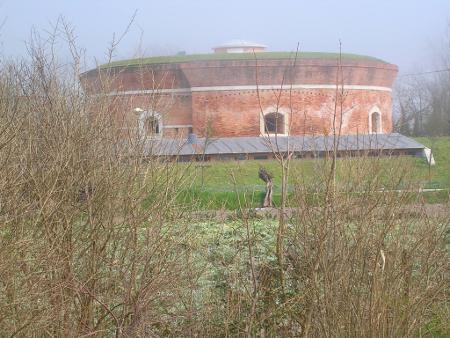 The building has two floors and a polygonal base of 25 m and it is surrounded by a water ditch.

On the top floor there used to be located 13 fire holes, where big cannons can be inserted and placed at a distance of only 80 cm from each other.

The tower was used also by the Italian army during WWII and was left abandoned until the 90’s. Today it belong to the city of Venice as as explained before it is part of a project to restore it.

On the corner of the island in the shade of the Torre Massimiliana fort is the basic bar-trattoria, Bar dei Tedeschi (the bar of the Germans!). Here you can eat simple meals ordered at the counter, or drink wine for 80 Euro cents (about 55p) a glass at rickety blue tables overlooking the lagoon.

The shore path along the southerly side of the island offers good resting-places for picnics, if you bring a rug to sit on. Close to the Torre Massimiliana there is a proper picnic spot with tables. 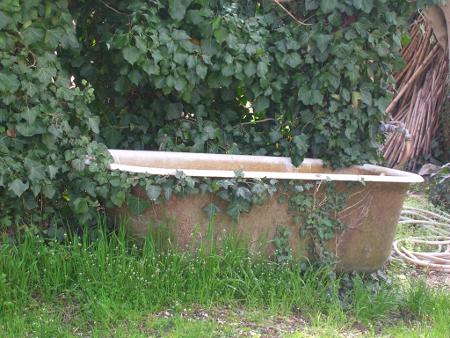 After visiting the tower (a particular mention to their toilets is due, since they were the best clean toilets I have ever seen in a public place in Italy), we decided to carry on walking on the north part of the island, the part which overlooks over Punta Sabbioni e the open sea.

Everywhere we walked there were cats, every house had at least 5-6 cats. We realised that these animals are obviously very important for the island, as they keep the rat and mouse population under control, since mice and rats do tend to attack the vegetable grown in the fields. 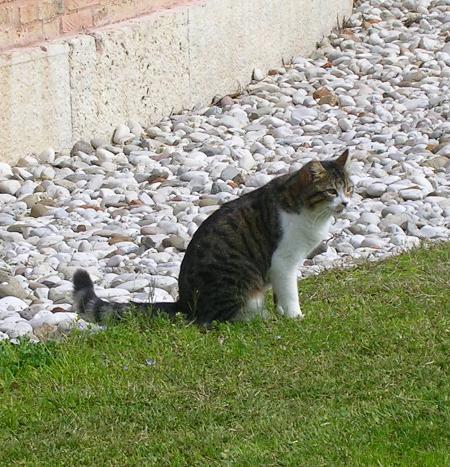 As we walked along the sea front, the view was amazing, a little fog was just lingering over the lagoon and you could barely see the dry land on the opposite side. We could just make out some cranes in the distance and they looked like they were just hovering in the sky. A bit like a surreal futuristic movie. it looked so strange and nearly creepy, definitely not the Venice we are sued to see. 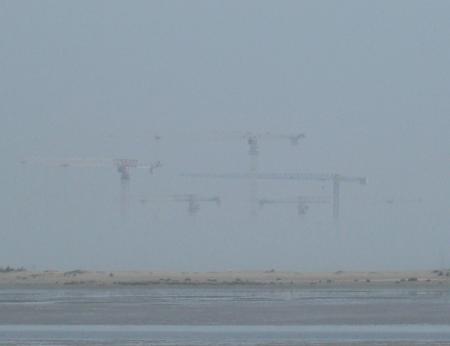 As we walked along the sea front we met a lovely lady who was cleaning her garden with her husband. We stopped to have a little chat and to try to find out a few things about the island. We found out the island only has 700 people living in it, mainly old people. 

The new generation, she said, are running away from Sant’Erasmo, they prefer to go and live in the city of Venice, where there are more services and shops But she said she would never leave her island, she loved it.

It was peaceful, clean, no cars (apart the small electric ones) and she could just take the vaporetto to the dry land for services and shops. No crime, no stress. She looked very happy.

I personally find it very sad that the young generation is leaving the island for a noisier and more stressful life, but I also understand it. I would probably feel very claustrophobic after a while, but then again, within 3 vaporetto stops you can be in Punta Sabbioni, where there are big shopping centres and the rest, so you are not so cut off from modern life, as it can appear at first. I suppose it is modern life and it happens everywhere around the world.

Well, after nearly 2 hours walk and a lot of mosquitoes attacks, walking along the sea front and through some fields, we finally reached the middle part of the islands where the church of Sant’Erasmo stands and where there is the second vaporetto stop of the island. 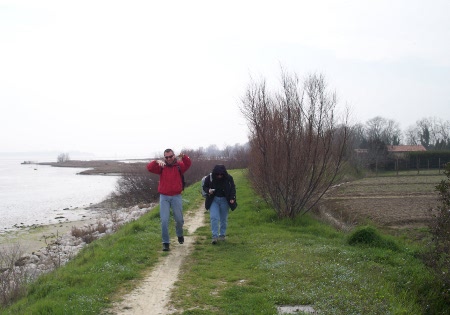 The church was consecrated in 1929 and was designed by Brenno Del Giudice. Inside. Inside the Martirio di Sant’Erasmo, of the school of Tintoretto is preserved.

By then our feet and legs were pretty tired so we decided to return to Venice and go and have a nice ice-cream in Fondamenta Nuove and then off for a nice meal in Trattoria Rosa dei Venti, near Piazzale Roma. 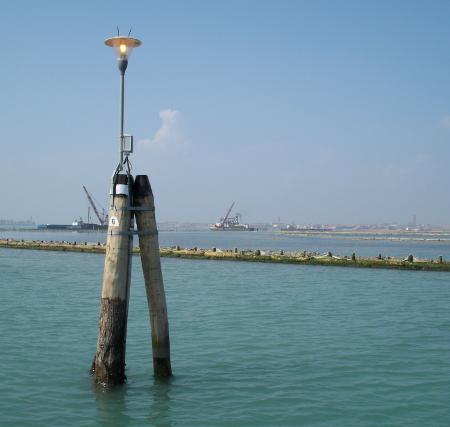 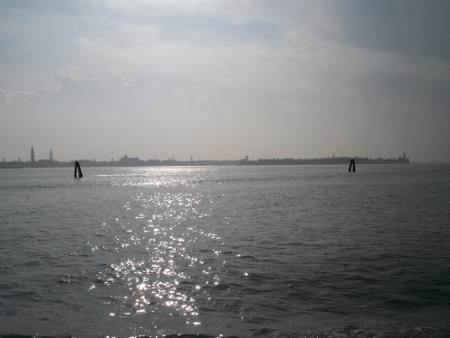 I personally suggest to visit the island by bike.

Cycling is a popular activity for visitors to the island; the roads are all flat and it’s a quick way to get about. Paths run along much of the shore. Between April and September you can even take your bike aboard the local ferry, thanks to a pretty new initiative of Venice, called Bicinbarca.

You can even just rent a bike for a short spin around the island at the Lato Azzurro cooperative on the way to the tower.

If you are looking for a quiet and restful stay, you could try getting a room on Sant’Erasmo. There is a B&B on the island, called Il Lato Azzurro.

If you are taking your trip on a Saturday or Sunday, you can also take a guided tour of the Lazzareto Nuovo (read my ealrier post)