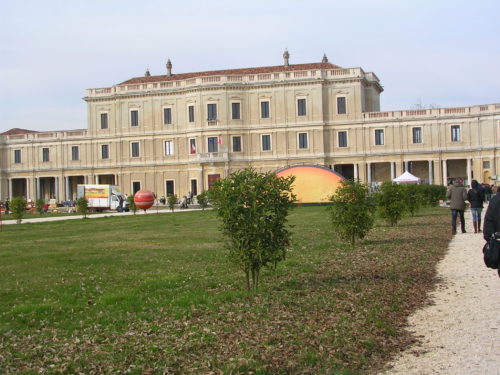 Yesterday, 7th March 2010, here on the Riviera del Brenta was a beautiful sunny and windy day, preparing us for maybe what will be a nice Springtime (we hope).

We decided to head for the day to Villa Farsetti in Santa Maria di Sala, a small town 30 km from Venice, to visit the 13th Astronomy and Mineral Exhibition. 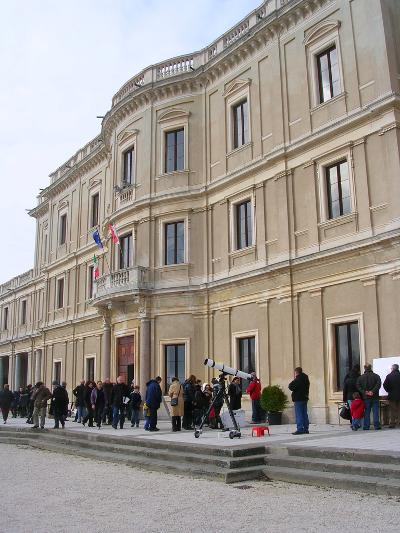 The exhibition is organised, as every year, by the Gruppo Astrofili Salese, a free association of non-professional astronomers, who love to divulge the love for stars and planets to everyone who is interested.

So, together with my youngest son and his friend and an American friend of mine who now lives in Venice, I headed to Villa Farsetti in the early part of the afternoon.

Filippo Farsetti, the person who commissioned the villa, was the only child of a noble and rich family. Amongst his properties there was the immense keep of Sala, where he decided to build the Villa. The complex, located in the rural context of the Municipality Santa Maria di Sala, was built with a clear reference to the antique Roman Emperor’s houses. Farsetti called the architect Paolo Posi from Siena and asked him to build the Villa in Baroque style, decorating it with 38 columns taken from the Tempio della Concordia in Roma (thanks to the help of Pope Clemente XIII). He was strongly influenced by Rome and the villa reflects his love for amphitheatre, the forum, the naumachia, the aqueducts, the temples and the palaces.

The villa was erected between 1753-1766 and it is a one body with the gentleman’s house part deployed over three storeys and the lateral ones over two storeys. Numerous Roman columns of precious antique marbles contribute to make the composition very elegant. The internal layout, recalls the typology used for the French and English houses of that era: the oval hall, axial to the portals and the lateral halls of the terminal pavilions, is deployed in double height with small balcony above and it is surrounded by numerous interlinked rooms, whilst the two squared staircases, located north of the house, lead to the upstairs floors. Antique columns, original floorings in Venetian terrace, ceilings and parietal coatings painted with floral motives of Roman taste embellish the gentlemen’s rooms. Around the villa there used to be also an amazing garden, a botanic garden and a labyrinth. On top of a small hill there used to be a small temple in Roman style and also an arch of yews to mimic a Roman amphitheatre. There used to be the reproduction of the remains of the temples of Diane and Zeus. Today we can only see the main villa, the two citrus greenhouses and the stables; regrettably the vast park with trees, the central amphitheatre and the naumachia south of the Cavin di Sala road, the botanical garden westward, the bosco montan eastward other than the numerous Italian style gardens, are lost. 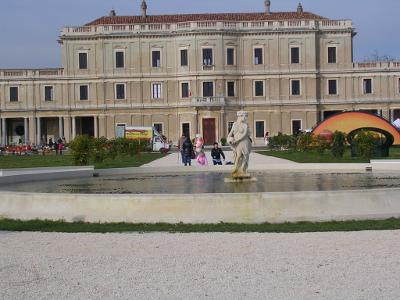 The villa now belongs to the Comune and in the last few years many efforts have been made to bring it back to its original splendour. Nowadays, the complex is home of art and set design, theatre, cinema and music events.

The Garden and the Flee Market

As we entered the garden of the villa we noticed that an antique fair market was on. Well, antique fair is a bit of a strong word, I would define it more like a small flee market with a touch of antique. 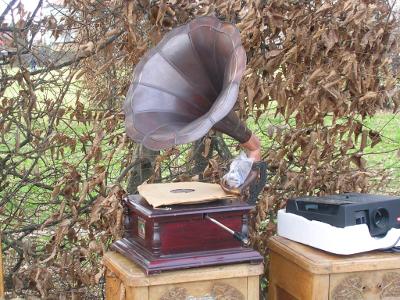 But nether less it was nice to browse around the goods on display. 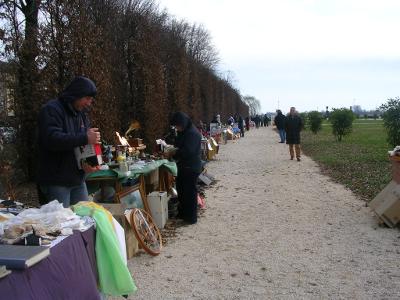 It was a very windy day and the stalls managed barely to keep in their place, but we still were able to have a quick look around.

Apart from the usual bric-a-brac nothing caught particularly my attention apart from a set of old marionette (puppets) which looked very old and nicely preserved.

After a lovely walk in the park, we headed to the Exhibition on the inside of the villa. First of all we were invited to visit the planetarium, where for about 20 minutes a very nice and prepared astronomer explained us the planets motions, the stars, the sun, while we watched the movement of the sky up on our heads.

Outside, at the front of the Villa, the other astronomers stood with their big telescope and were proud to show people the spots on the sun But what are sunsposts?     “They are dark spots, some as large as 50,000 miles in diameter which move accross the surface of the sun, contracting and expanding as they go. These strange and powerful phenomena are known as sunspots.” as indicated by Exploratium.

After the planetarium we headed upstairs for the main exhibition. Here we saw a beautiful collection of minerals from all over the world including some asbestos and some very rare minerals. Minerals are defined as solid, inorganic, naturally occurring substances with a definite chemical formula and general structure. Almost all chemical elements in the Earth’s crust are associated with at least one mineral. They vary in color, hardness, density, crystal form, crystal size, transparency, composition, location, and abundance. Some minerals are radioactive (uranophane), while others are magnetic (magnetite). Some are uncombined elements, such as gold, silver, sulfur, bismuth, copper and platinum. Certain minerals, such as fluorite (calcium fluoride), glow with a vibrant luminescence after exposure to ultraviolet light.” thanks to  Dar Roberts, Department of Geography, University of California, Santa Barbara . Some of those luminiscent minerals were exposed in a special glass box with an ultraviolet light shown them glowing. 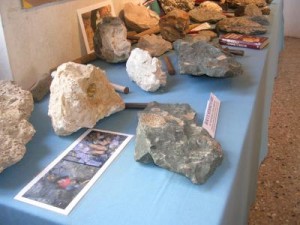 In one of the room we had fun trying out the different weighting scales giving us the approx weight we would have in each planet. I liked particularly my weight on the moon!!!

A simple and interesting video presentation on the way comets are created was shown and the children enjoyed watching it whilst waiting to enter the next room.

Last, but not least, we took part in a little presentation about the colours of the light which was hosted by my dad – yes, I did have a precise reason for visiting the exhibition :). The lecture lasted about 20 minutes, but it gave you a fair amount of information on the reason why we see the colours the way we do and the difference between the pigment colours and the light colours. 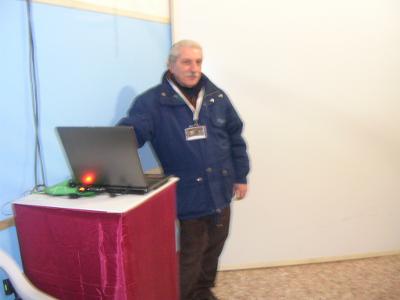 We really had a lovely time and considering the subject of Astronomy is not an easy one, the exhibition was really designed to captivate people of all backgrounds and age. All children were amazed by the planetarium and by being able to touch things and try the telescope out.

I really wish more of these sort of events took part in our province. Well, we will have to work on that!

The Exhibition will be on from March 7th till March 17th In Villa Farsetti di Santa Maria di Sala, Venezia

Quick preview of Terra Felice Wine in the Euganean Hills