TEMPORARELY CLOSED AS OF NOVEMBER 2021

Cicchetti and luxury in Venice? 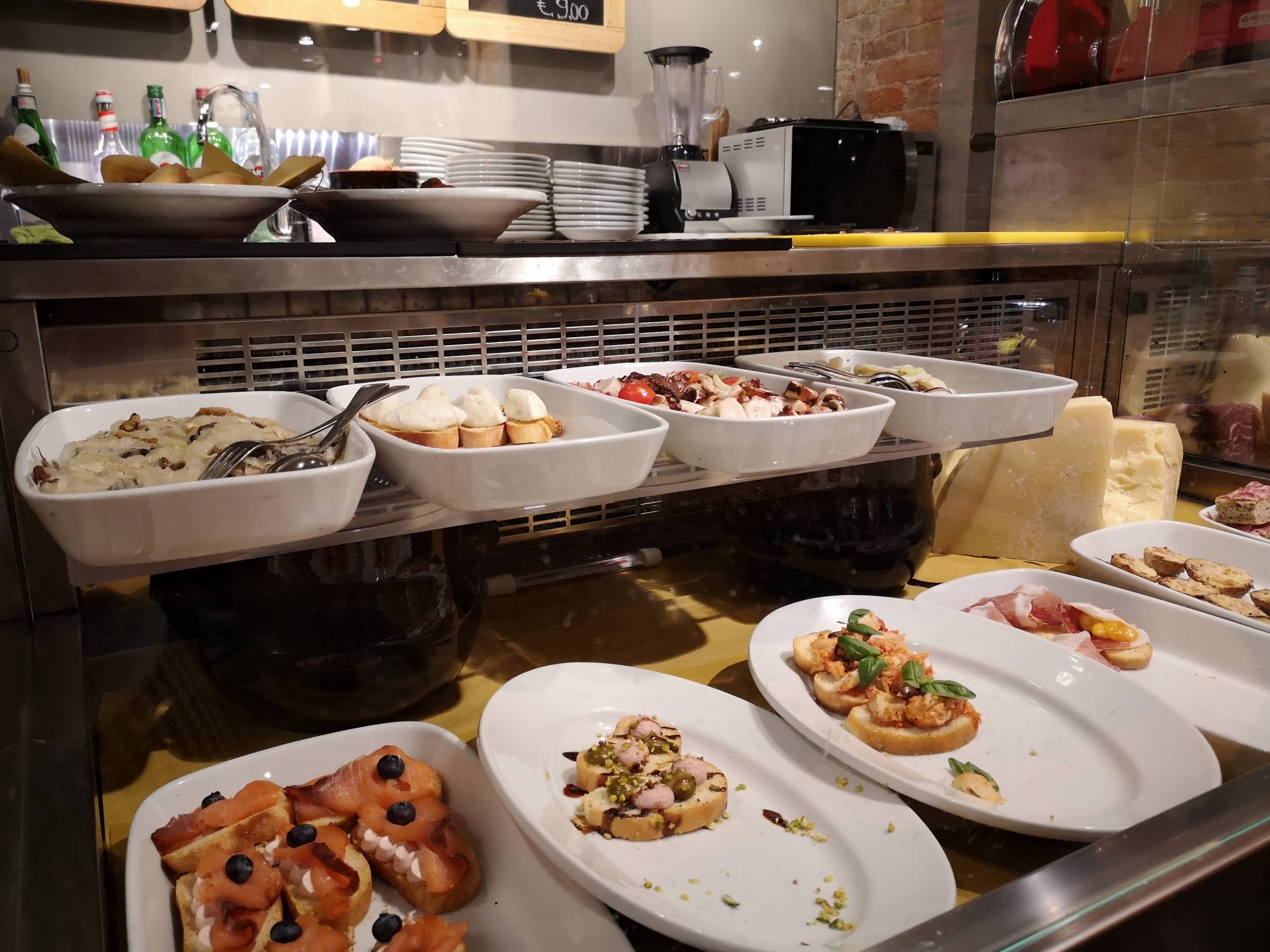 Bacaromi: a luxury bacaro in Venice!

When 2night told me that I should go and have dinner in a luxury bacaro in Venice, I widened my eyes thinking: a luxury bacaro? It screeched in my ears like saying ‘hot ice’ – a true oxymoron.

However, after my visit a few days ago, I had to change my mind.

Bacaromi is one of the restaurants inside the Hilton Molino Stucky on the Giudecca island in Venice. 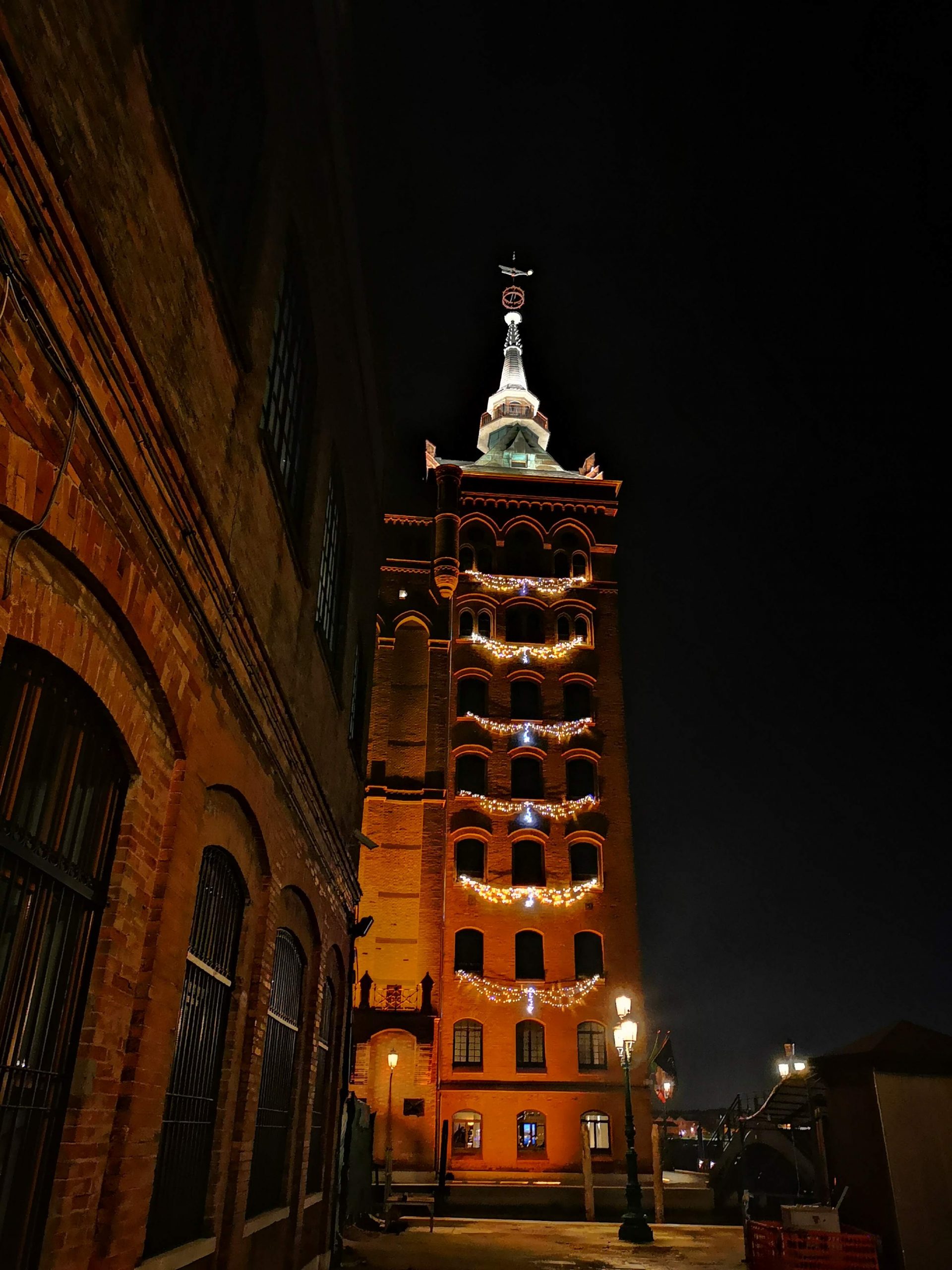 The Molino Stucky is a beautiful neo-Gothic building located near the ancient Fortuny factory.

Built between 1884 and 1895 by the Swiss entrepreneur Giovanni Stucky, it was originally a mill supplied by boats that crossed the lagoon and was also managed as a pasta factory. The large extensions were added in 1895. The mill run until 1955, the year in which, after a slow decline that began already in the early 1900s, it was closed. 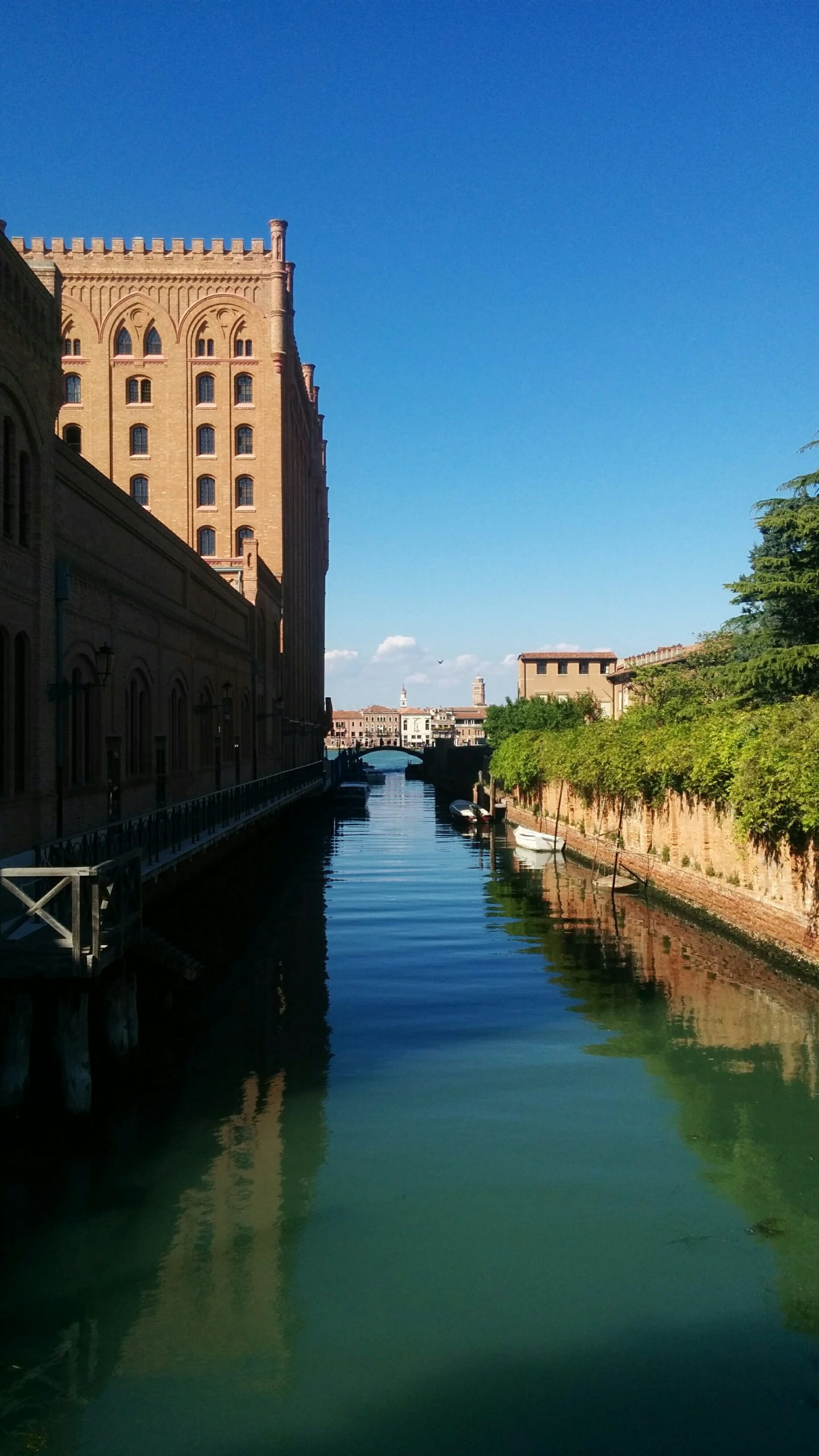 Acquired in 1994 by the company Acqua Pia Antica Marcia and restored in 1998, it was in the early 2000s that it returned to shine when Hilton Hotels transformed it into a luxury hotel, finally opening it to the public in 2007. Molino Stucky is now a luxury hotel with 379 rooms, a rooftop swimming pool and a two thousand-seat conference room.

In 2013 The Bacaromi restaurant was opened.

Bacaromi: both traditional and modern 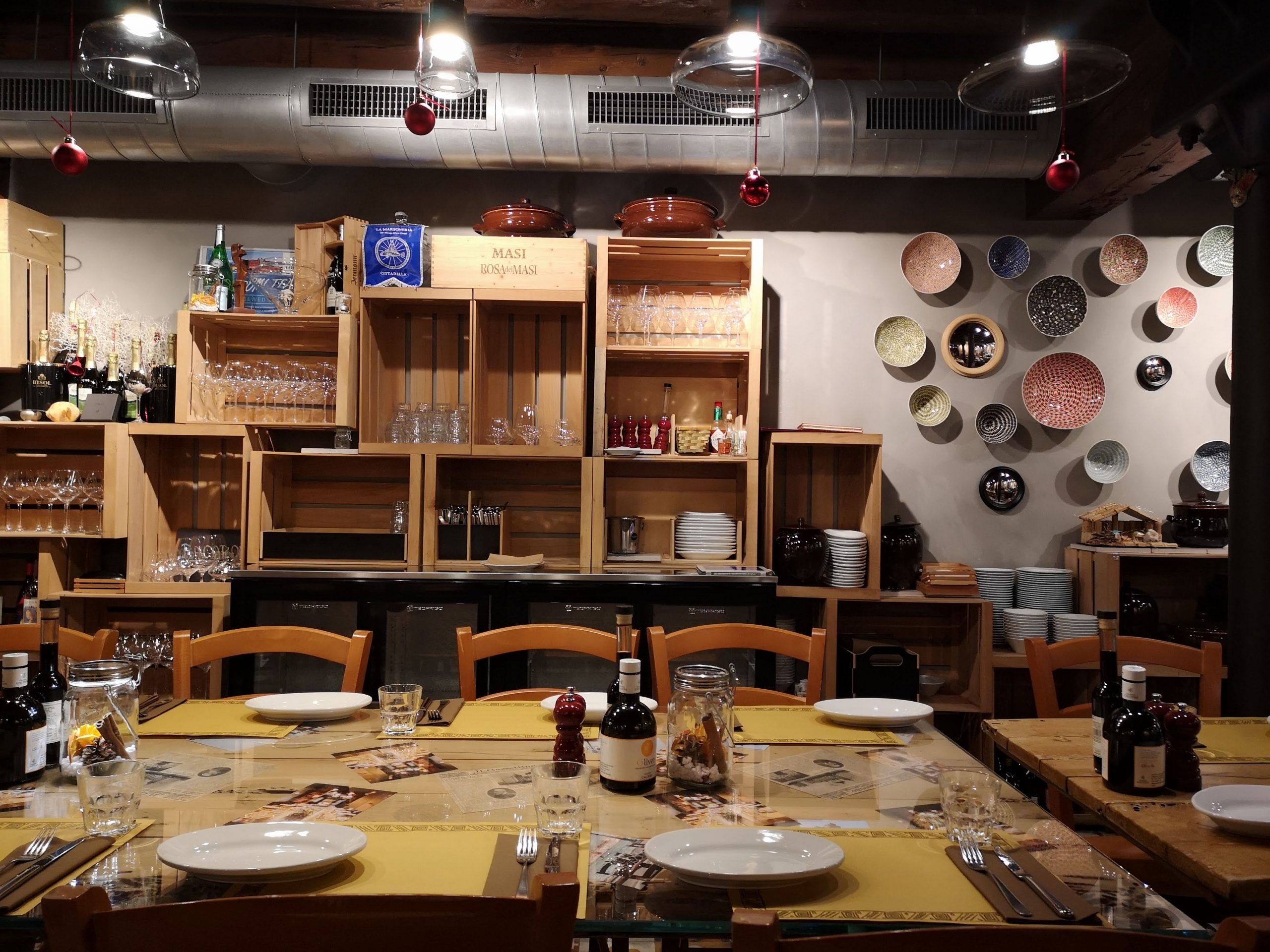 I went to Bacaromi recently with a dear Venetian friend and the first impression we had was of a place mixing the atmosphere of a traditional “Bacaro” with the appearance of an international design restaurant.

You can feel this as soon as you cross the threshold: the lights are warm and well placed, the furniture and decorations on the walls are all strictly “vintage”, the beautiful mosaic of coloured tiles on the floor is gorgeous, no table cloths on the tables, the walls with exposed brick and cast iron pillars transports you back to the old osterie of Venice. 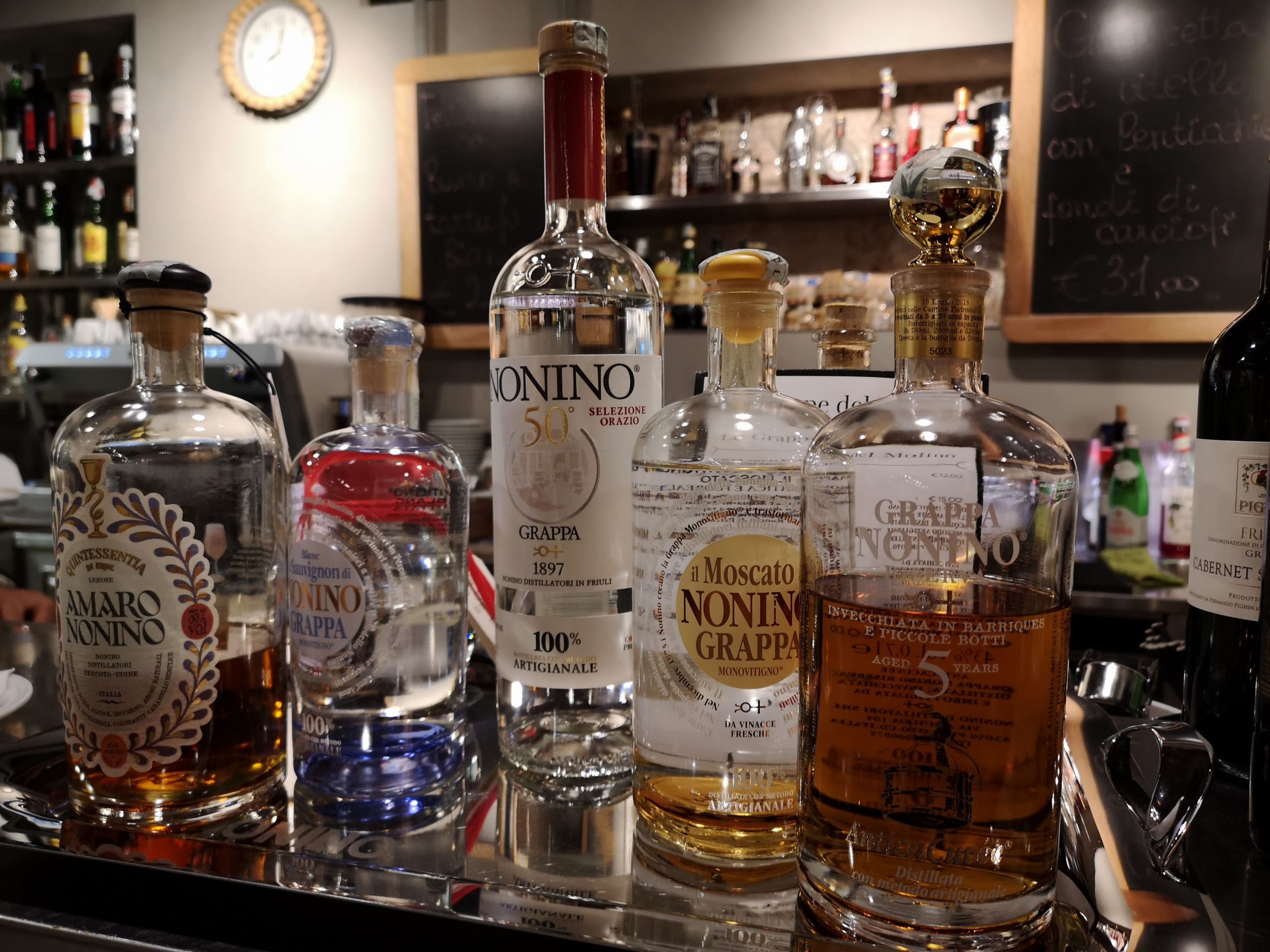 The details are presented, at the same time, with a modern and glamorous style: tables and chairs are designed by the famous architect and interior designer Paolo Lucchetta; cured meats and “Cicchetti” are displayed in an elegant but informal way. On one wall three blackboards show the menu and daily specials. The wines, the main protagonists of each respectable bacaro, come exclusively from the Triveneto area. 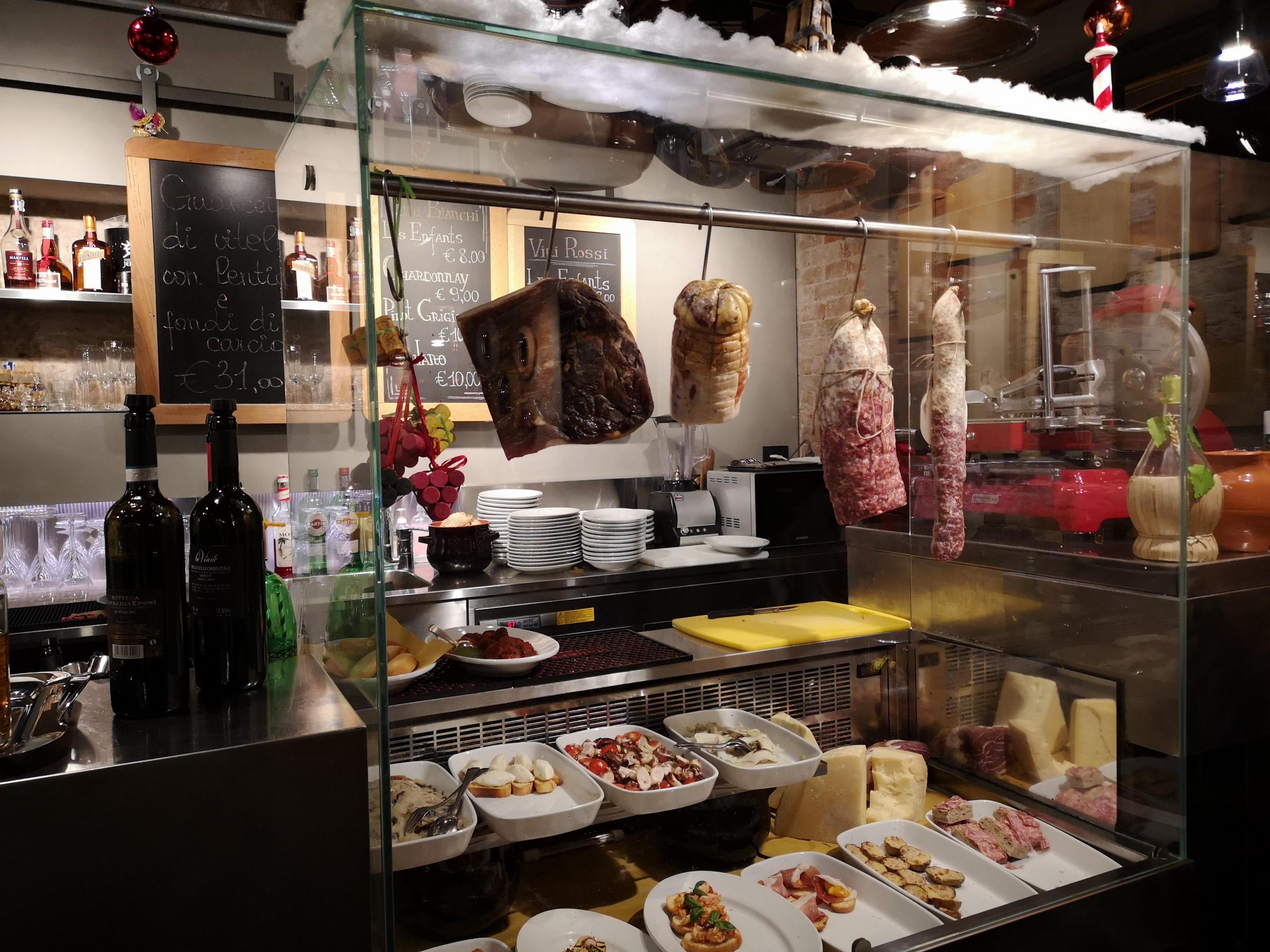 (To understand what a Bacaro is, read my blog post Where and How to eat Cicchetti in Venice.)

Upon our arrival, the very nice Maître D’ Giovanni Burrafato welcomed us, pampering us all evening, with his professionalism but always with an eye out for every small detail.

The restaurant seats up to 40 people in the dining room, while in the warmer months, it can seat up to 100 people with tables set up on the splendid courtyard overlooking the Giudecca Canal.

Giovanni made us sit at one of the tables overlooking the canal and immediately offered us two Spritz for aperitif, while we were checking the menu. 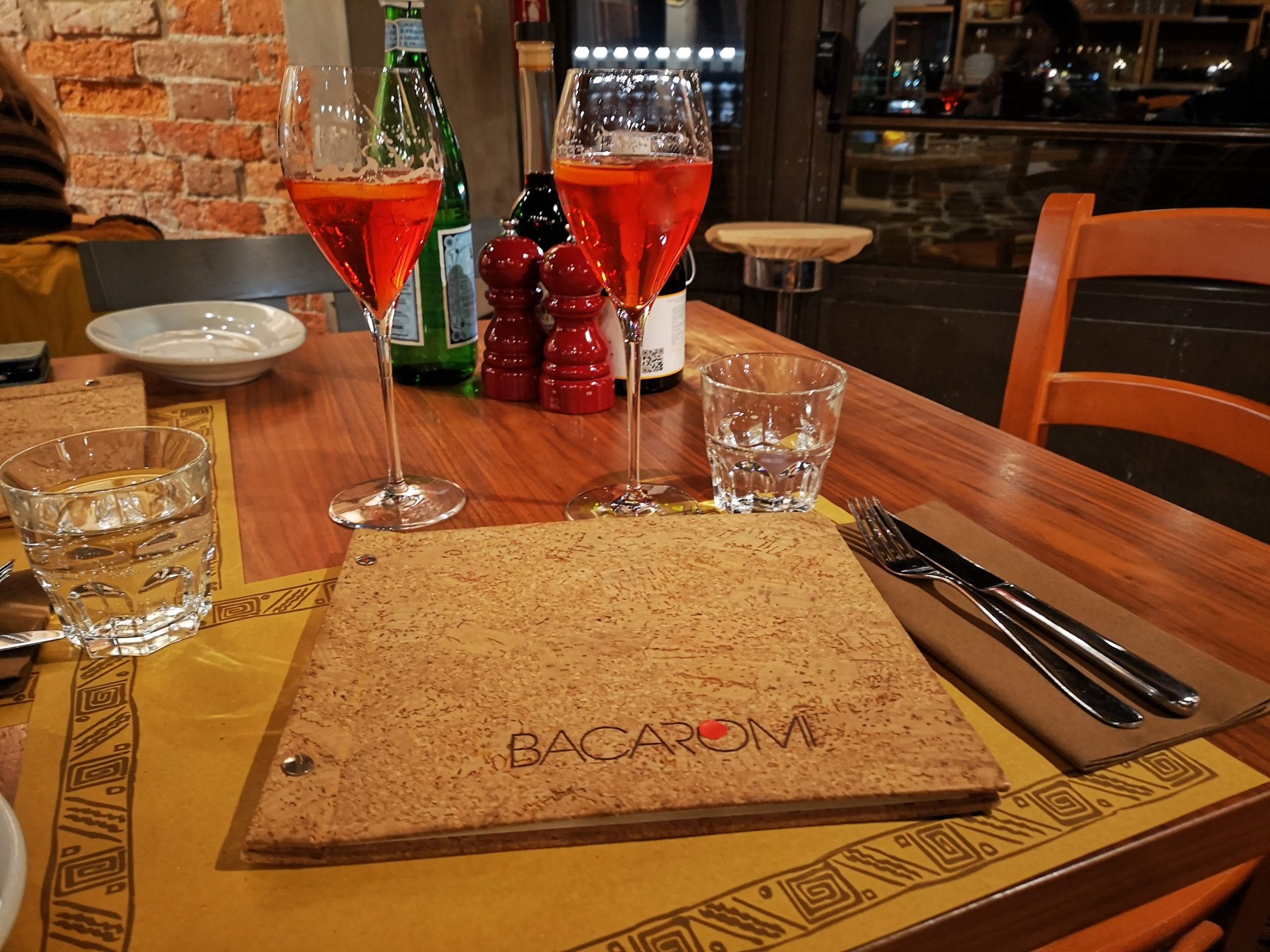 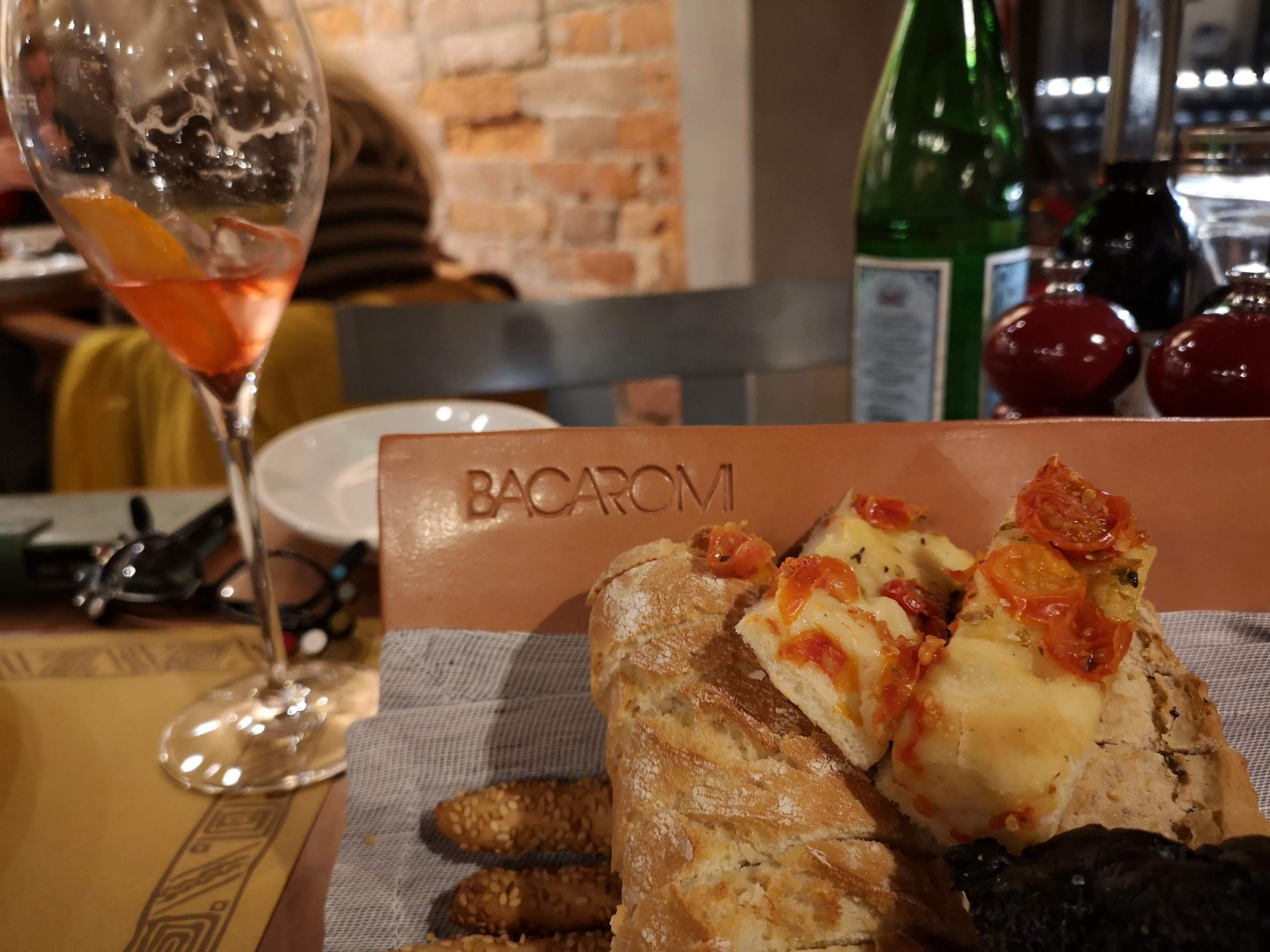 The kitchen is entrusted to the skilled hands of chef Ivan Catenacci, at the helm of both Bacaromi and Aromi, the other restaurant inside the Hilton Molino Stucky and the menu reflects the chef’s willingness to embrace tradition, presenting it, however, in a modern key, both to the Italian and international public.

The menu changes regularly, offering typical Venetian cuisine and different types of “Cicchetti”: everything is described first in Venetian dialect, then in Italian and English. The signature dishes offered on the menu are the basket of “Mixed Fried Fish and Vegetables” and “Pasta and Fasoi”. You will also find Venetian Liver and Baked Pork, but the fish and seafood typical of the Venetian lagoon, of course, are the main players. 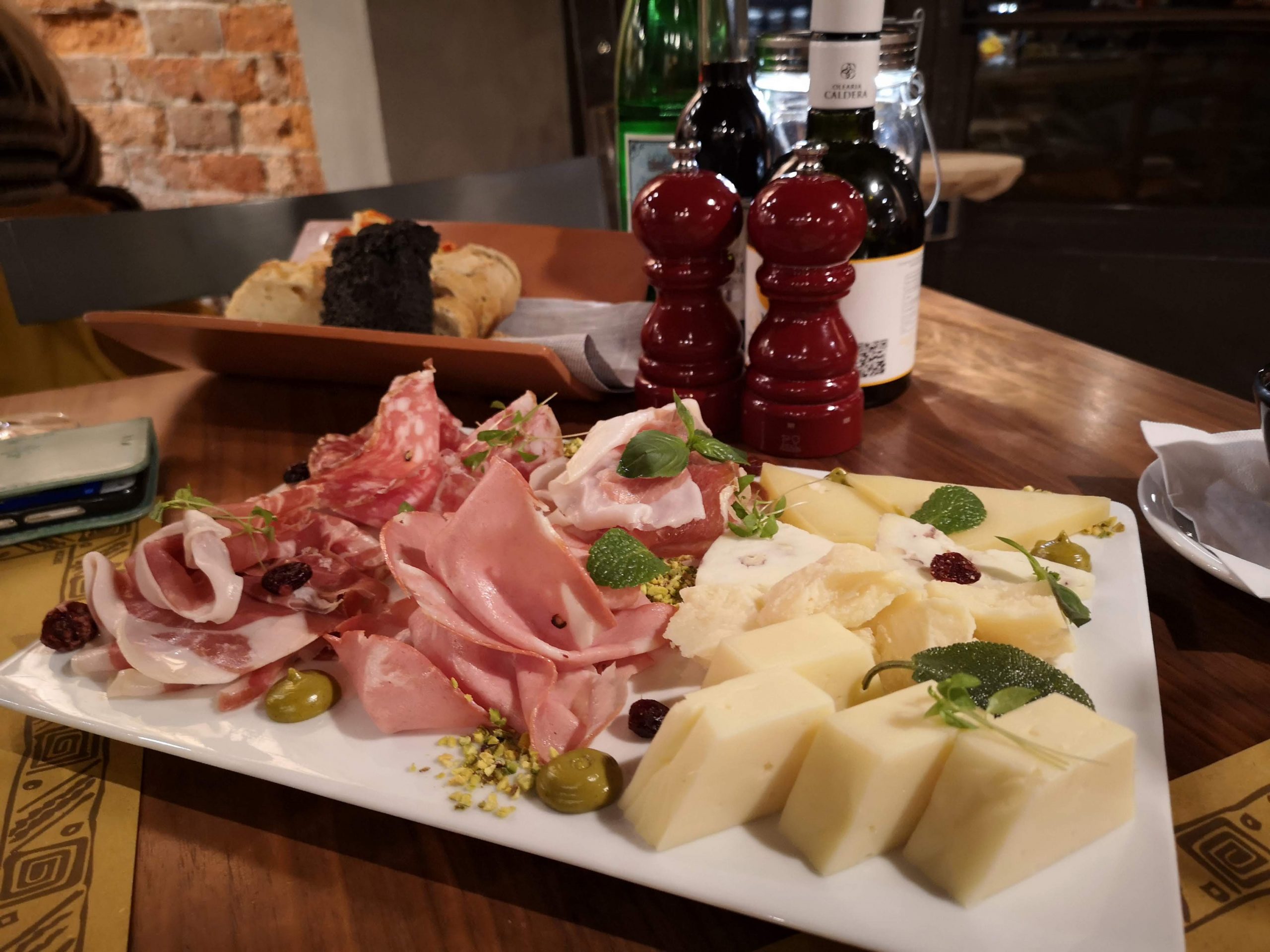 The cold meats were very tasty and the portions abundant, the cheeses were creamy and delicious, combined with an amazing pistachio cream. All accompanied by a very generous basket of fragrant bread and focaccia, strictly homemade and presentated in a terracotta tile! 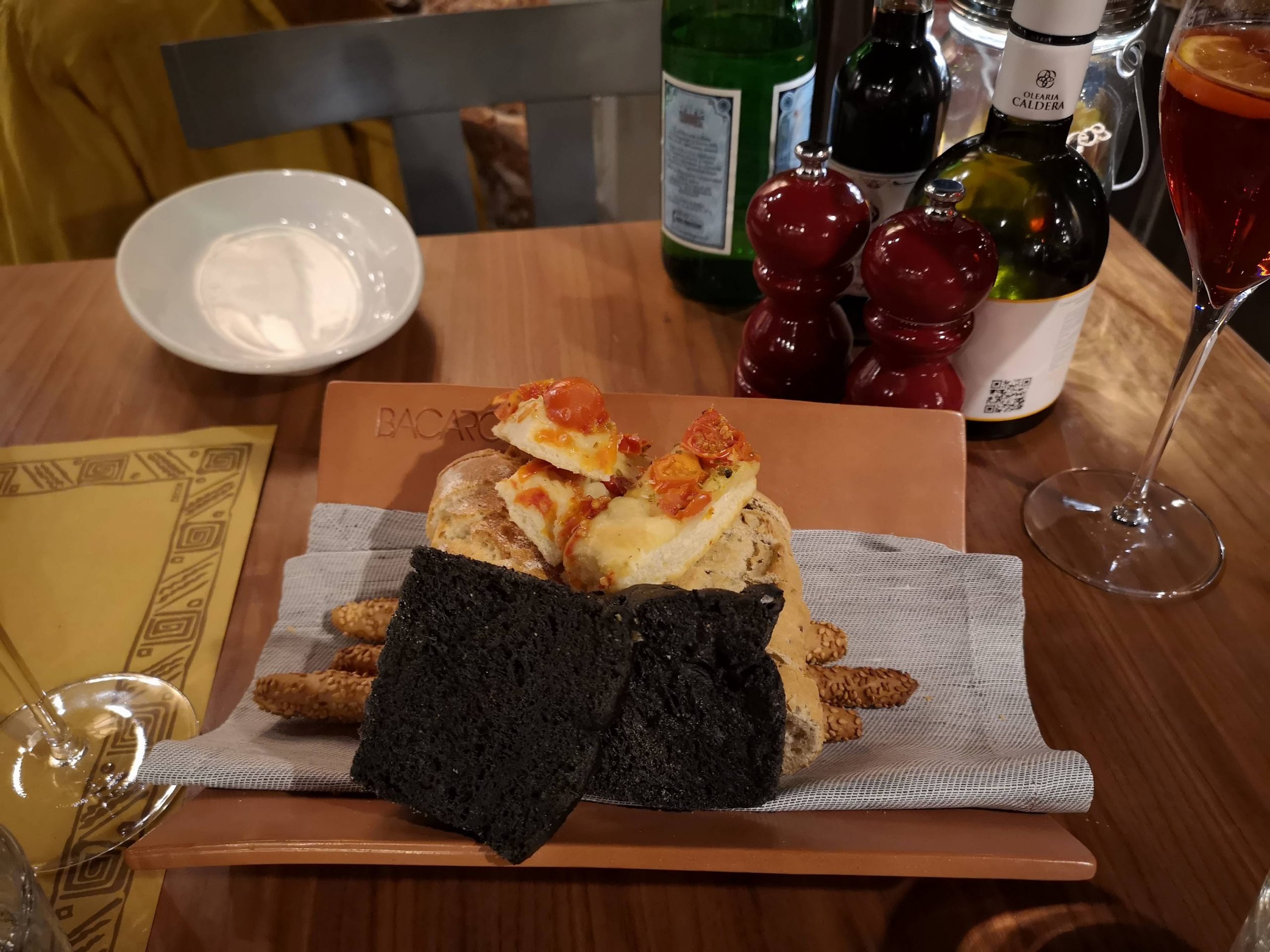 Nice thing to be noted: as soon as Giovanni discovered that I had a slight gluten intolerance, he immediately ran to the kitchen to toast gluten-free bread, especially for me! If you have intolerance and allergy problems, do not hesitate to mention it to the staff when ordering: they will do everything possible to help you! 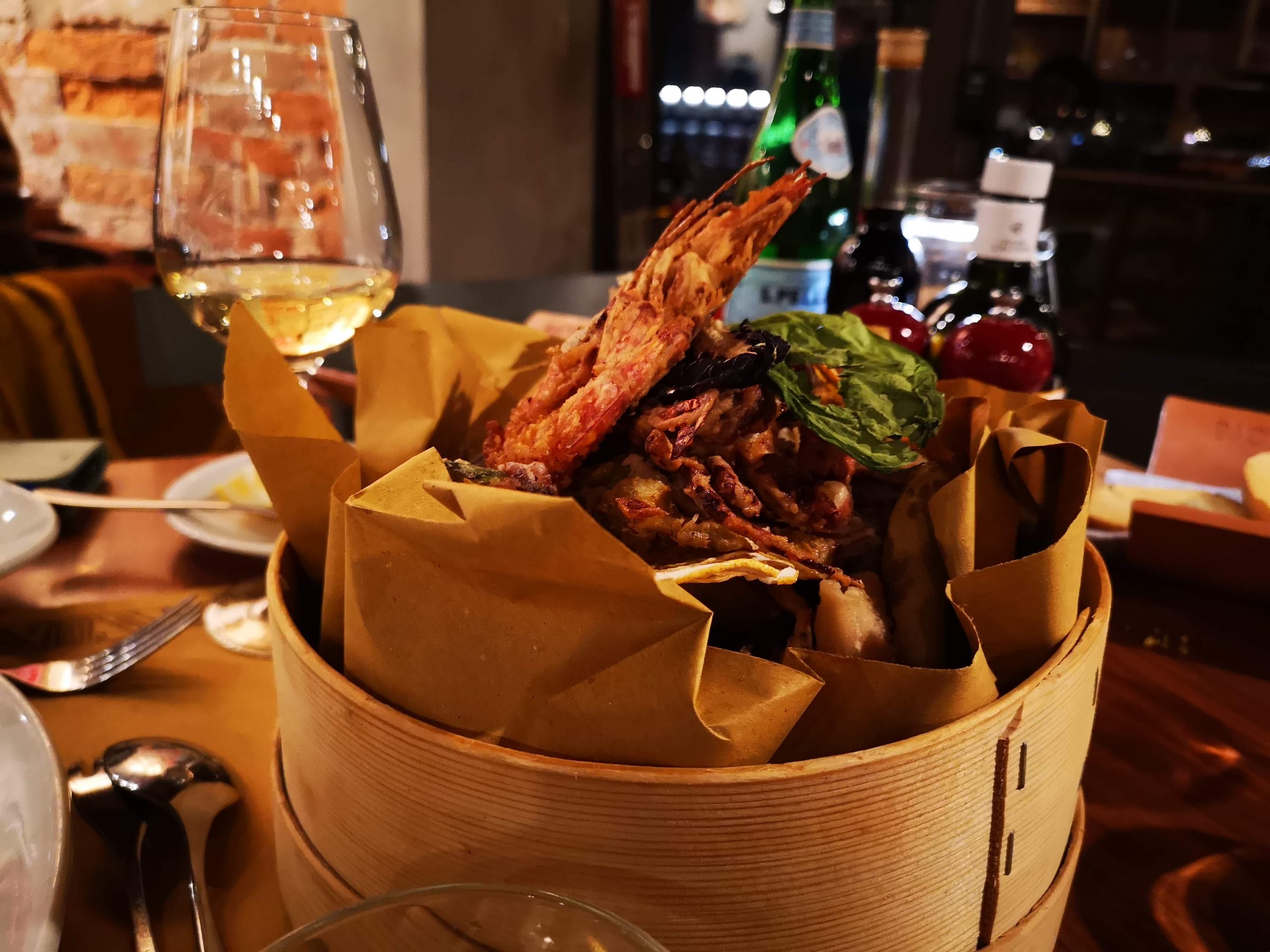 The mixed fried basket was a riot of sea and land flavours, very abundant, perfect for two people: a varied choice of lagoon fish and vegetables from the Venice territory. We were delighted with the fried turnips! And we couldn’t finish it from how big it was. The presentation was also beautiful! 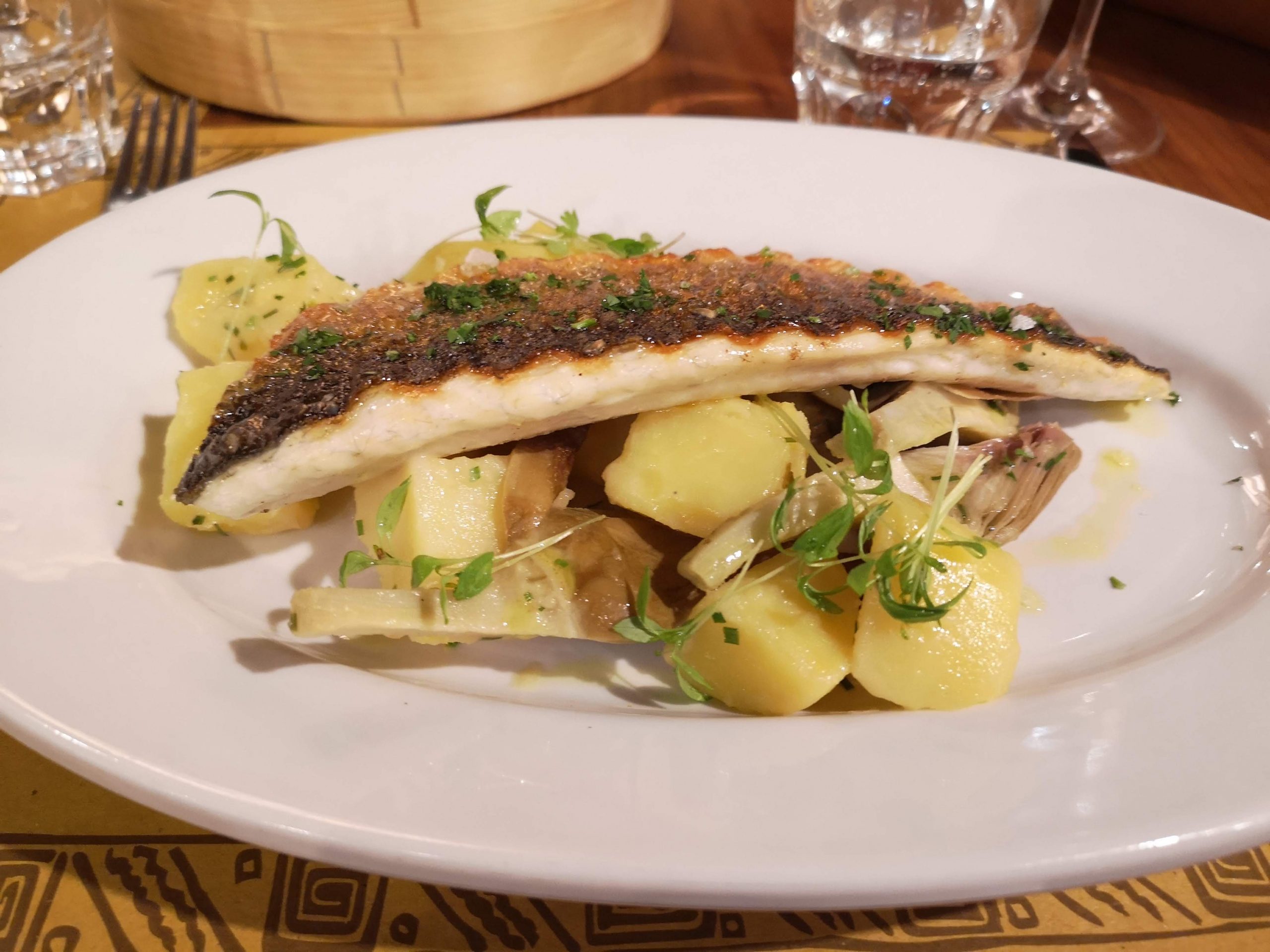 The sea bass fillet was superb, a tasty and elegant main course. Often the skin of the fish, after cooking, ends up being soft and sticky: neither palatable, nor tempting to look at.

In this dish, it was light and crisp, a delightful chromatic effect that added an extra touch to a classic recipe. Obviously both the potatoes and the artichokes were cooked to perfection.

Although decidedly full, we could not resist and we also took two desserts, both homemade: a Meringue with strawberries and vanilla sauce and a Sbrisolona with vanilla ice cream. 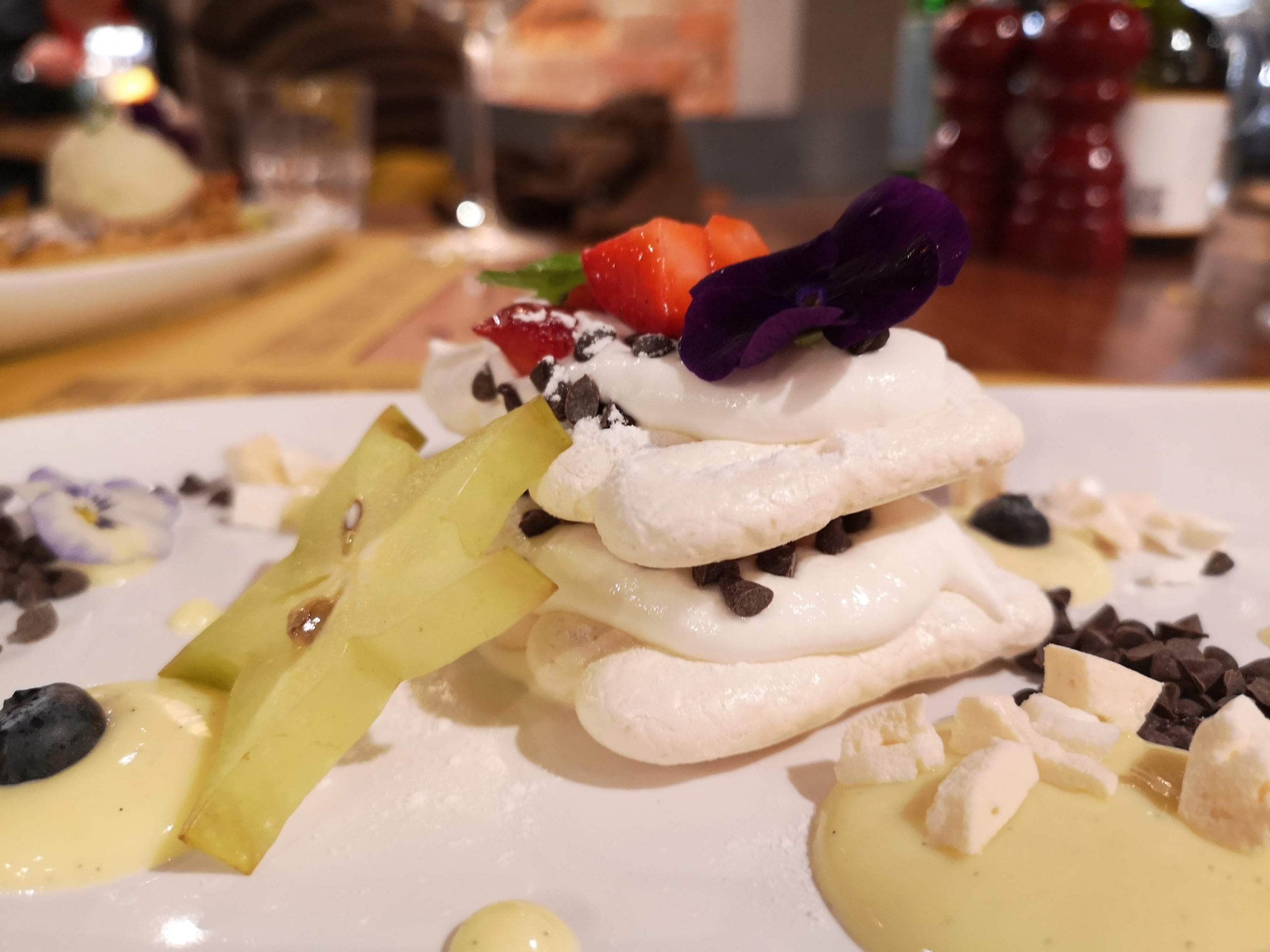 The Meringue was sweet, voluptuous and light, almost dusty when it shattered in my mouth: what can I say, simply perfect! 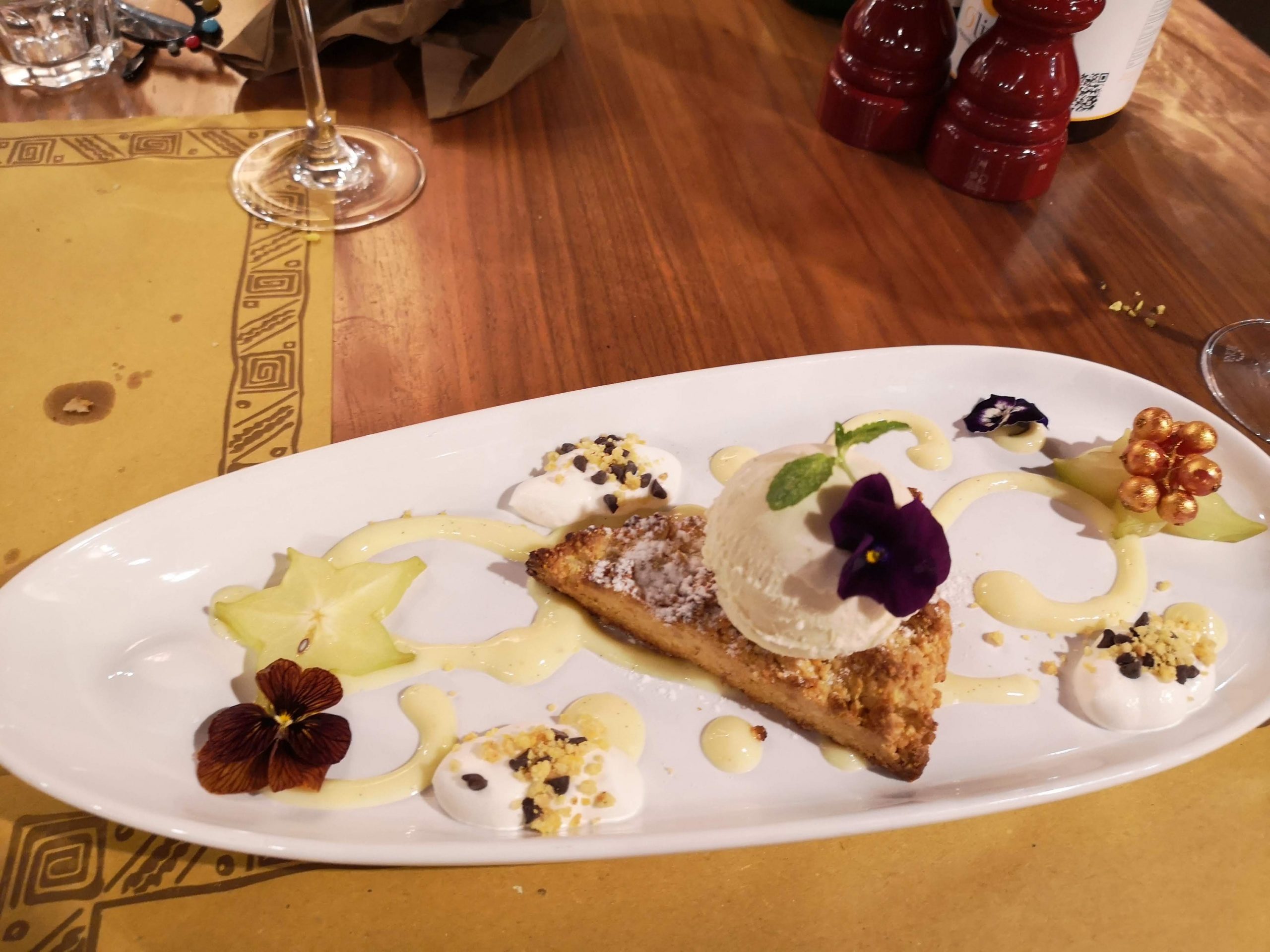 The Sbrisolona, a typical northern dessert that in Veneto is also commonly called “rosegotta” and “fregolotta”, was deliciously crumbly and fragrant, served warm with homemade vanilla ice cream.

Throughout the dinner the staff was always present: discreet, fast and kind.

This is a location particularly suitable for a romantic evening for couples or a fun night out with friends, with a fantastic view of the Giudecca canal.

It is not an economic experience like a classic Venetian bacaro, but certainly very pleasant, absolutely worth trying, especially for those who do not know Venice. 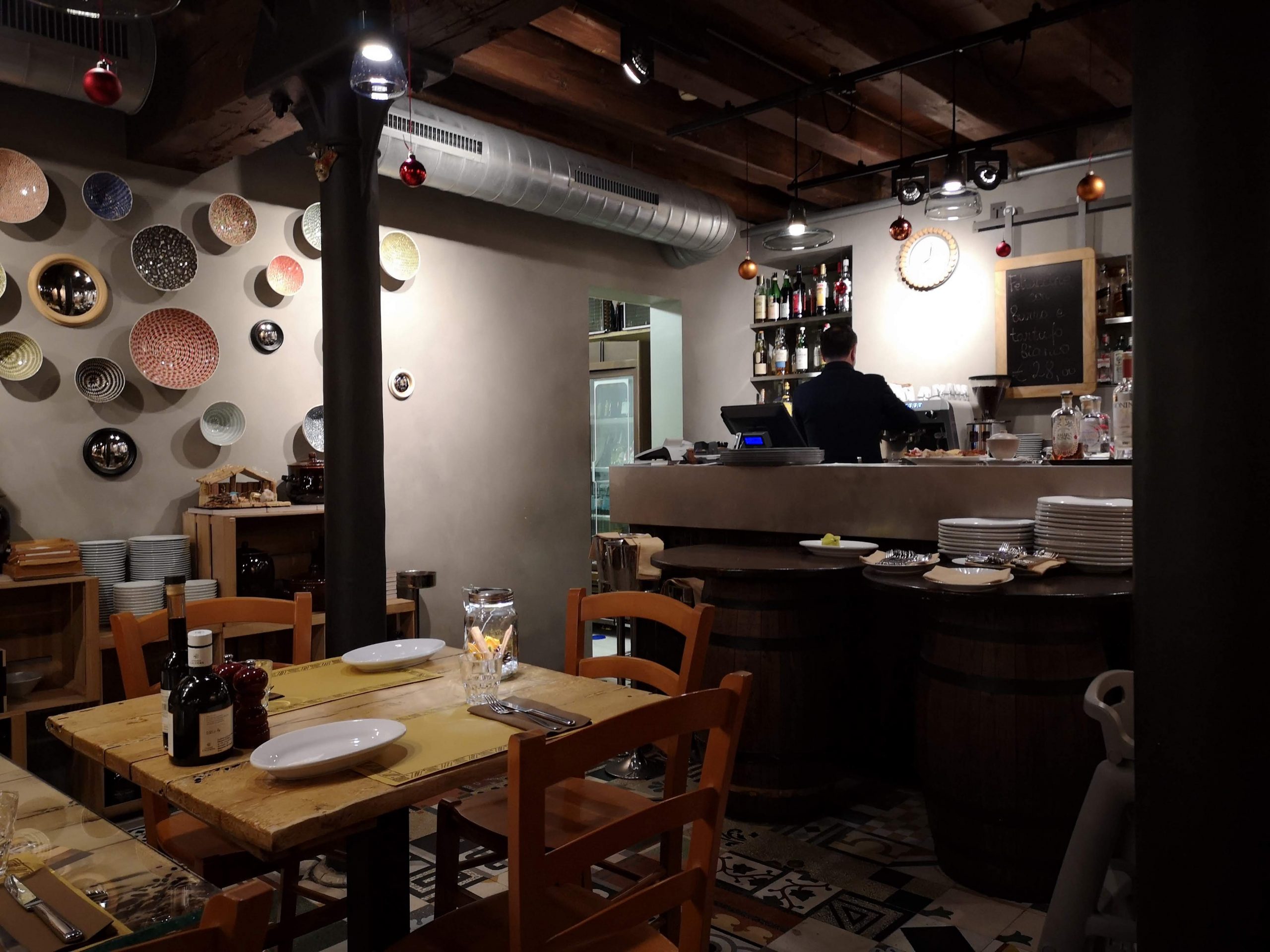 During the summer season, guests can enjoy the courtyard, facing the lively Giudecca canal, having a nice meal first and then going up on the terrace of the Hilton Skyline Rooftop Bar to enjoy a nice sunset!

A big thank you to the Maitre D’ Giovanni Burrafato and his staff for the lovely welcome! Hope to see you all soon again!

+++Disclaimer:  I was sent to this restaurant for the purposes of reviewing it by 2night Venezia.  The fact I got the meal for free has not influenced the review in anyway.

Cocaeta: the best Crêpes in Venice

Venice in The Fog in December