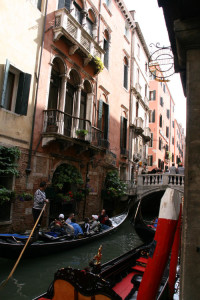 Yesterday I started my new series of posts on what people remembered the best from coming to Venice. This is the second post and it is written by Shelley White, who I would like to thank very much for accepting to do this!

Venice is our anniversary treat. We do all the tourist areas and are parched. We must have gelato. We tag on to some students on the Calle Foscari. Students know where to find bargains so we stick like glue. Near the university, blood-curdling sounds waft over. Screams. Cries. Raucous laughter. We enter the university piazza. A crowd is gathered. In the middle, a young man stands, stripped to his Y-fronts. He wears false breasts, thigh-length boots and a laurel wreath. Plastered in flour, eggs and ketchup, he perches on a bench and reads from a scroll. We understand little because his dialect is thick, his giggles uncontrollable. When he fluffs his lines, onlookers jeer, pelt him with stinking fish, squirt him with cream and make him swig wine. After reading, his friends force him to run the gauntlet of thwacks with fly-swatters, smacks with newspapers and kicks to his pert backside. Whats going on? A bystander explains, is Paolo, my nephew. She flushes with pride. Today he make the papiro. He graduate! Congratulazioni! from us. Grazie. She beams. You know the papiro? Seeing our puzzled looks, she continues, is custom not only in Venezia but in all Veneto. The friends of Paolo write down all the funny, ridiculous moments of his life. He must read this papiro in the street. After, is put on wall for all to see papiro of Paolo. But why the silly clothes? from me. The friends choose the clothes  there is no characteristic costume. Only strange. She then links arms with us and insists we share some champagne with Paolo, the new graduate. Well, why not? It was our anniversary celebration, too, wasnt it? Ice-cream could wait. 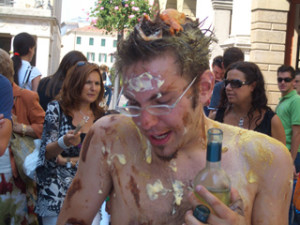 Nowadays the graduation day in the Universities of Padova and of Venice is an individual celebration, where the newly graduated doctor (anyone getting a University degree in Italy is called a Doctor) is surrounded by friends and family and after discussing his thesis in front of his team of professors and getting officially declared Laureato (graduated), they go out and have a party. But before heading to the party venue there is an unofficial second test that the poor Laureato must pass. That is the reading of his Papiro and the real crazy initiation to life: in Padova in front of Palazzo Bo and in Venice in front of the University’s faculties, the poor graduate must wear crazy clothes (or many times not wear anything!!), while standing on a step, reading the papiro which his friends have prepared, eating and drinking the craziest things ever (dog food, ice-cream and chillies or any kind of mix of the most unimaginable things), enduring the beating up of his friends all in front of the passers by, which many times just stop and take pictures! Personally I recall my sister’s graduation where we got her very drank (she did not use to drink back then, so she definitely got started to good life) and that of my best friend, who became a nurse and obviously was forced to wear a very skimpy sexy nurse lingerie set in front of all passers by! The tradition of writing the papiro and celebrating the newly graduated goes back to the XVI century, where people were celebrated collectively and in a much more solemn and serious way. The whole town of Padova will take part in the celebration and the whole University would celebrate, from the Rector to the cleaners. The graduates would have to wear the traditional laurel crown (like today) Back then the papiro would only tell about the achievements of the graduates, not their sex life etc. It is has been only in recent years that the Papiro has become more of an erotic account of the life of the graduate. 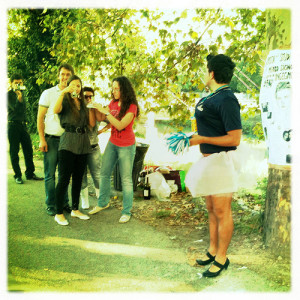 Graduate with papiro on Tree by Alemaxale

To create a Papiro is not simple:both the drawing and the text require some sort of poetic and artistic skills. The Papiro is written in rhyme and more often than not it is written in our local dialect (Venetian or Padoan) and it tells the story of the person who is graduating, starting from his conception up to the day of the graduation, and it has a strong sexual connotation, never been explicit though. Many tales have been told in these papiri with parents finding out many hidden things about their darling children! The combination of tales and funny rhymes is not easy to be achieved but generally it is all born during a nice evening by a group of the closest friends of the undergraduate. After some glasses of wine and some good food, the rhymes start flowing and the text is quickly laid together with a nice sexy picture of the Doctor to be. The end result is always extremely funny, depicting clue episodes of the undergraduate life. Generally the meeting concludes with people crying their eyes out at the expenses of the poor victim! I am very glad Shelley and her husband got to witness one of these events, this is a part of Veneto which not many tourist know about!!

Shelley has a Certificate in Creative Writing from Lancaster University. Some of her stories, poems and flash fiction have been published in the book, ‘Health Matters’ (2008), the magazines Aware, Words With Jam, The Pygmy Giant, Everyday Poets, Scribblers on the Roof and the Lancashire Evening Post. She likes to write about the places shes visited – discover what she lost on an Italian ramble: ‘Melodies, Murals and Maccheroni’ published in ‘From the Lake-side’ http://www.poetryonthelake.org/page3.php Shelley tweets in haiku at www.twitter.com/haikumad