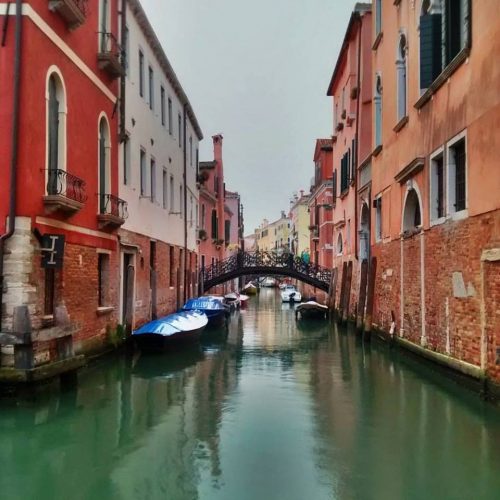 Every so often I get so lucky to get asked by writers from all over the world to read their books set in Venice and to give my opinion.

For me there is nothing nicer than receiving a book with dedication just for me….makes me feel so special!

This week it was the turn of Venetian Blood: Murder in a Sensuous City by the great Christine Evelyn Volker.

Christine was so nice to send me her book with a lovely Venice themed card! So sweet.

Review of Venetian Blood: Murder in a Sensuous City 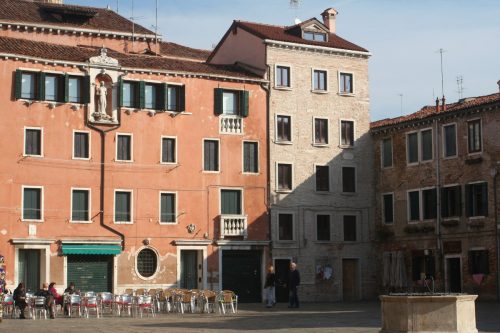 The book is set in Venice during the 90’s, which made it a bit hard for me to remember what it was like back then, since during that period I was actually living in the UK.

So I had to set aside the Venice of today and go back to the Venice of over 25 years ago, which was a bit strange to do: you know, no internet and social media to tell you how to live your life, no touch phones or, even better, no mobile phones, dating was actually done by meeting real people in real life and so on.

The book talks about Anna, an American 40 years old, who gets entangled in a very sticky situation as soon as she steps into the most wonderful city in the world.

It is not a just a mystery thriller but also a bit of a romance and also a little of an insight of what Venice looks like to the outside eye.

Knowing Venice so well I was actually looking all through the book to try to find mistakes and discrepancies in describing my wonderful city, but I have to admit Christine did a very good job and all through the book it feesl like you are in Venice living the adventurous experience of Anna.

Interview with the author

1.  There are so many books written about Venice.  Why should someone be interested in reading yours?

I feel that mine is a fresh take as the story of a female tourist who’s cerebral, suspected of murder. It’s multi-layered: part mystery, part romance, part psychological thriller, but ultimately a journey of self-discovery.

I was going through a painful period in my life and decided to write my way out of it. Through time, I fused that with my love of a special and intriguing city which endlessly fascinated me. As a writer you spend a lot of time in your setting, so you’d better enjoy it.

3.  How do you deal with writer’s block?

I listen to music, like a female vocalist, or instrumental. Music transports you. If there’s an acute writing issue that’s bothering me, I continue to think about it, late at night, turning it over in my mind. Sometimes the right treatment appears in the morning.

4.  What did you write in earlier drafts that ultimately wasn’t used?

There was another female character, a libertine type, named Pauline. I got a kick out of her, but I listened to early feedback indicating there were too many women with similar voices. I dropped Pauline; I preserved her best lines which now are spoken by other characters.

5.  What advice from early readers did you not take?

Eliminating Anna’s backstory. I see it enriches her. She’s 40 years old, she had a life before coming to Venice, and those same demons accompany her in this new setting.

6.  What is the main thing you want readers to take away from your book?

Perseverance and resilience are indispensable in this life. We’re all given different obstacles.  It’s best to tackle them using both our rational and intuitive sides.

7.  If your novel were made into a movie, who would you pick for key roles?

8.  What’s your next project and how did you decide on it?

Jaguar Moon, my international mystery set in Peru (Cuzco and the Amazon). I wanted to expand themes from Pablo’s story in Venetian Blood. So I followed him across the ocean, and I’m delving into a journalist’s return to Peru after escaping as a child. It’s a broader story than Anna’s.

Book Details:
Book Title: Venetian Blood: Murder in a Sensuous City
Author: Christine Evelyn Volker
Category: Adult Fiction, 328 pages
Genre: Mystery
Publisher: She Writes Press
Release date: August 2017
Tour dates: Sept 25 to Oct 6, 2017
Content Rating: PG-13 + M (There are a few instances of bad language and a scene with partial nakedness but little concrete description.)
Book Description:
Struggling to forget a crumbling marriage, forty-year-old Anna Lucia Lottol comes to Venice to visit an old friend—but instead of finding solace, she is dragged into a police station and accused of murdering a money laundering count with whom she had a brief affair. In the days that follow, Anna, a US Treasury officer with brains and athleticism, fights to clear her name in a seductive city of watery illusions. But as she tries to pry clues from a cast of uncooperative characters who implausibly deny what she sees and hears, she begins to question whether they are hiding something…or she is losing touch with reality. Racing to unlock secrets, she succeeds instead in unleashing a powerful foe bent on destroying her. Will she save herself and vanquish her enemies, including her darkest fears?A captivating tapestry of murder, betrayal, and family, Venetian Blood is the story of one woman’s brave quest for the truth—before it’s too late.

Christine Evelyn Volker became intrigued by foreign cultures at an early age, which propelled her to study Spanish, German, and Italian. After pursuing an MLS and an MBA, she was drawn to international banking and became a senior vice president at a global financial institution. Her career brought her to Italy, where she immersed herself in the language and made frequent visits to Venice. A native New Yorker, she resides with her husband in the San Francisco Bay Area of California, where she heads a local library non-profit organization and writes about environmental sustainability. She is currently at work on her second international mystery, this one set in the rainforest of Peru.

And now for the best part!

You too can have the pleasure of reading this wonderful book. Just try your luck with this competion!


Or link to the giveaway: