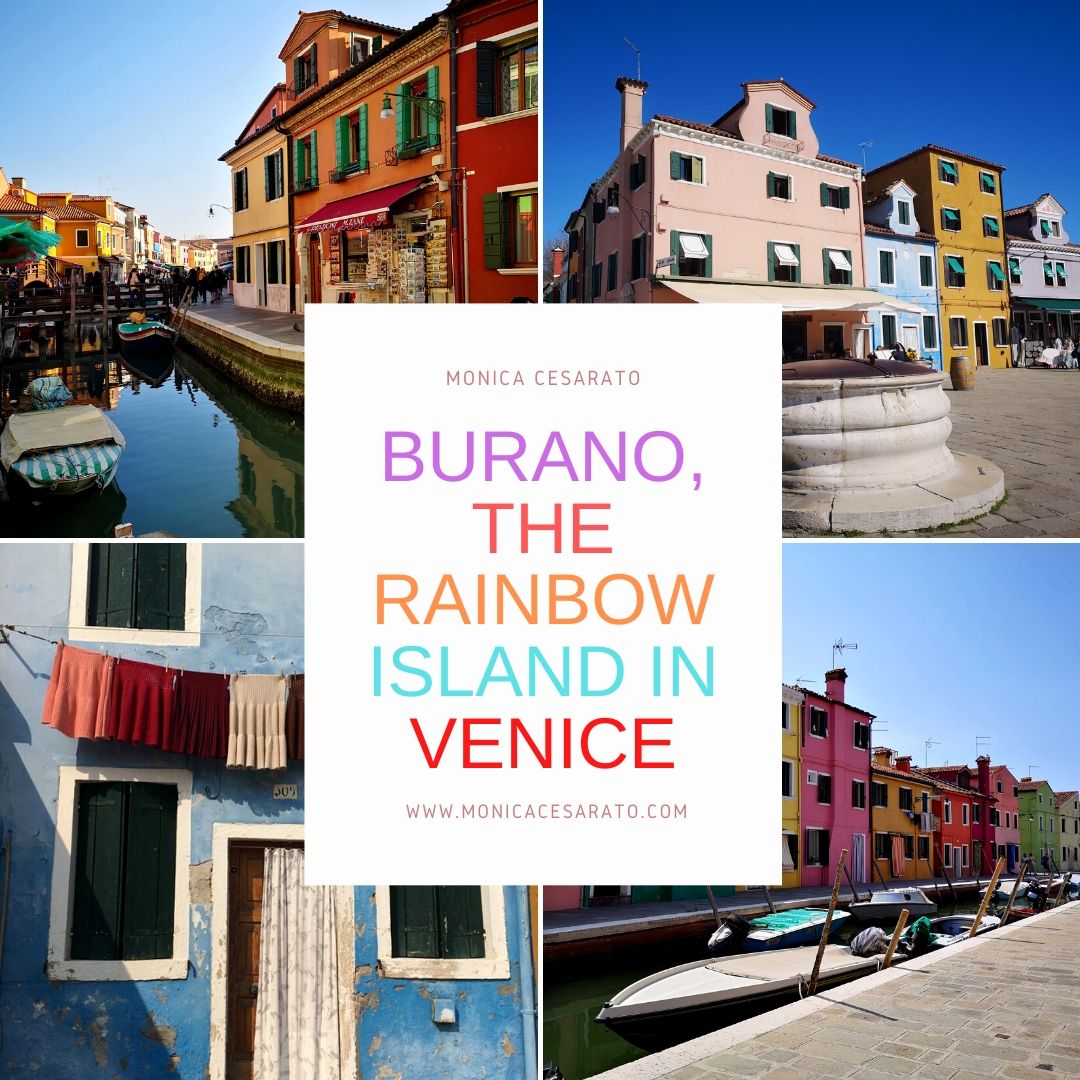 Burano:I have been away from my blog for few months now, been very busy (cannot moan about that, busy means work, so…) but it has also been very hard to get back into writing.

The ideas were there, the post titles where ready, but the will to write was all gone. I suppose it was what is generally called writer’s block, even though I am not not a writer. 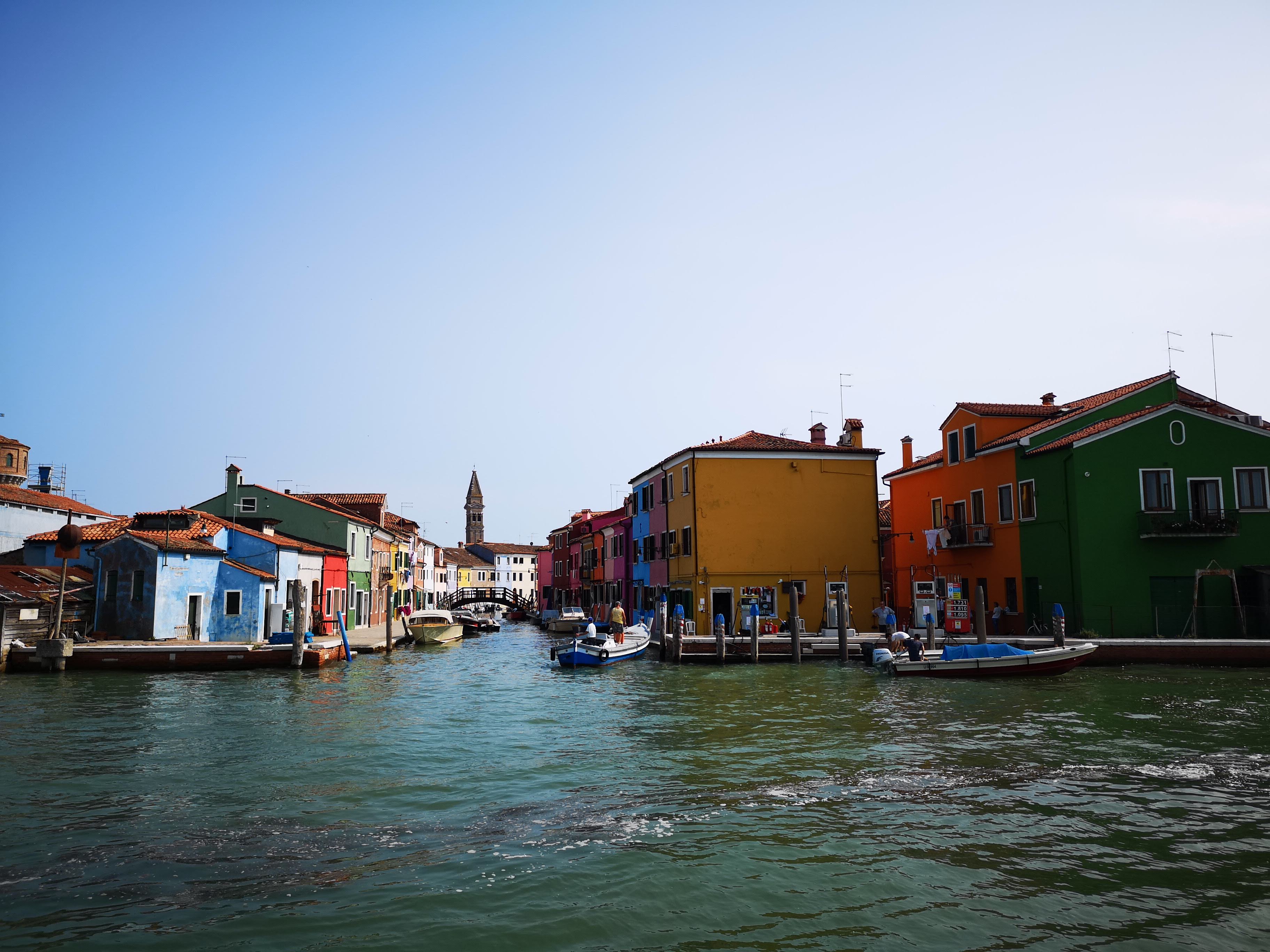 But today I picked up my computer, moved to the garden, sat down convinced I would finally get to write and then  there it was again…that feeling of having nothing to say. The feeling that people were not really interested at all in my opinion, on the information I try to give them about Venice and the area where I am so lucky to live, on my writing. 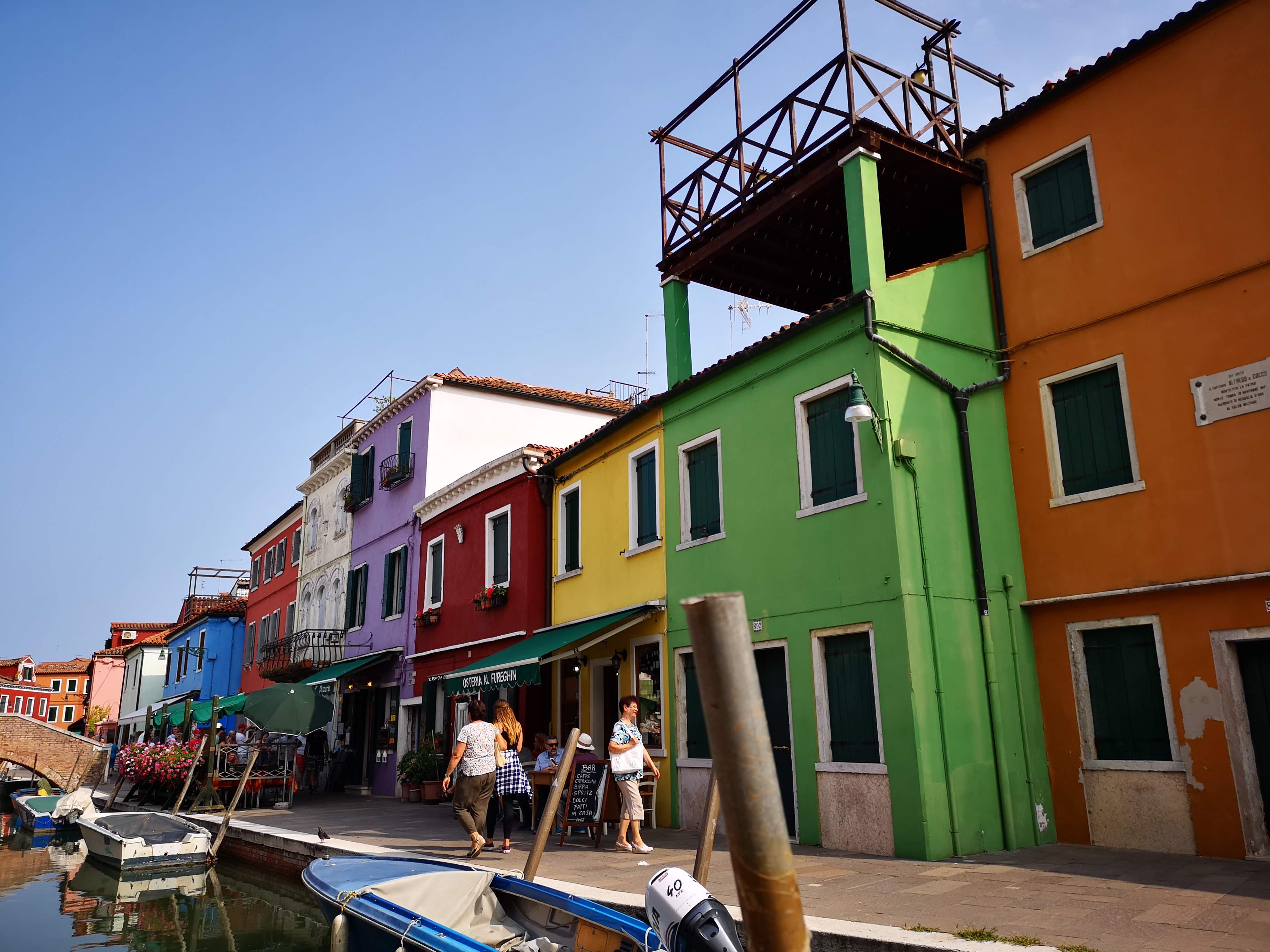 So I started to read more books about Venice, its history, its people and its legends.

Finally I have settled to write something on Burano, even though so many other people have already written about it. 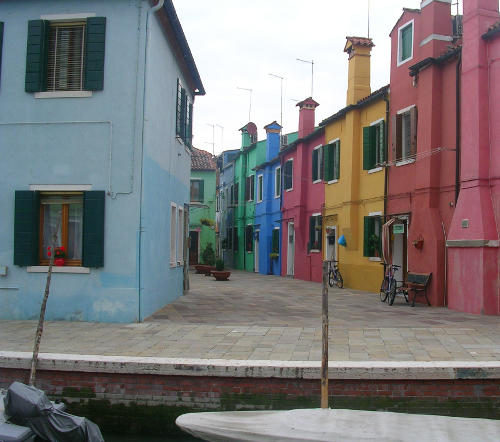 All colours of Burano

I visited the island last May and even though it was packed with tourists, the charm and attraction of this lovely place is undeniable. You get such a sense of peace, of history, of time standing still, that no other part of Venice has ever given me. 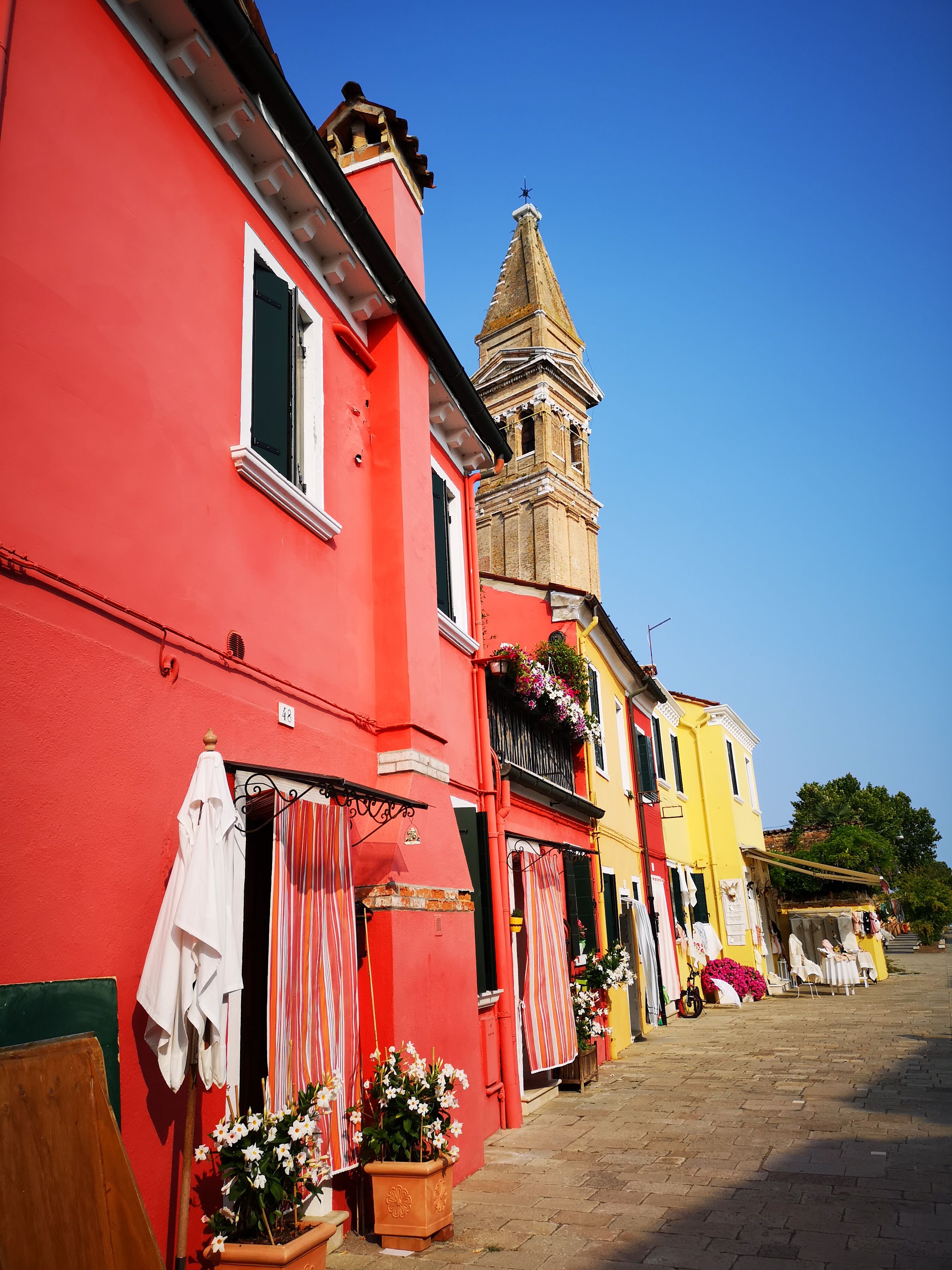 Recently a client of mine told me he had no intention of going back to Burano, there was nothing to see there! I was literally gob smacked but then again, of course, colourful houses and green canals and delicate lace and old tradition is nothing today, isn’t it!

Burano – The Island of Colours 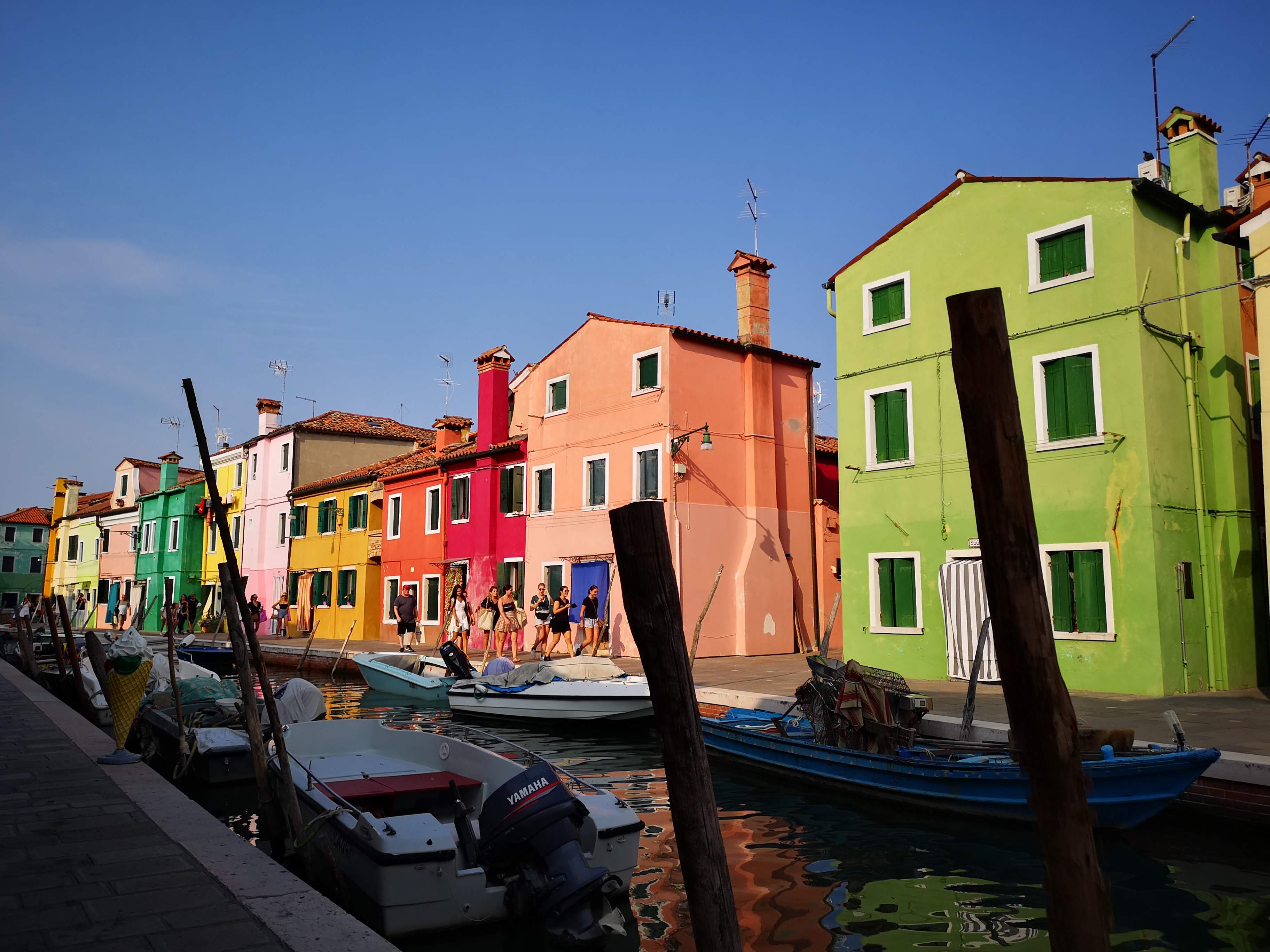 Burano (that in our Venetian dialect is Buràn /bu’ran/) is an island (hey, right, what a surprise since it is in the lagoon of Venice) or better is a set of islands not too far from the main city of Venice (actually four small islands).

Burano is connected to the island of Mazzorbo by a bridge, the rest is surrounded by water. 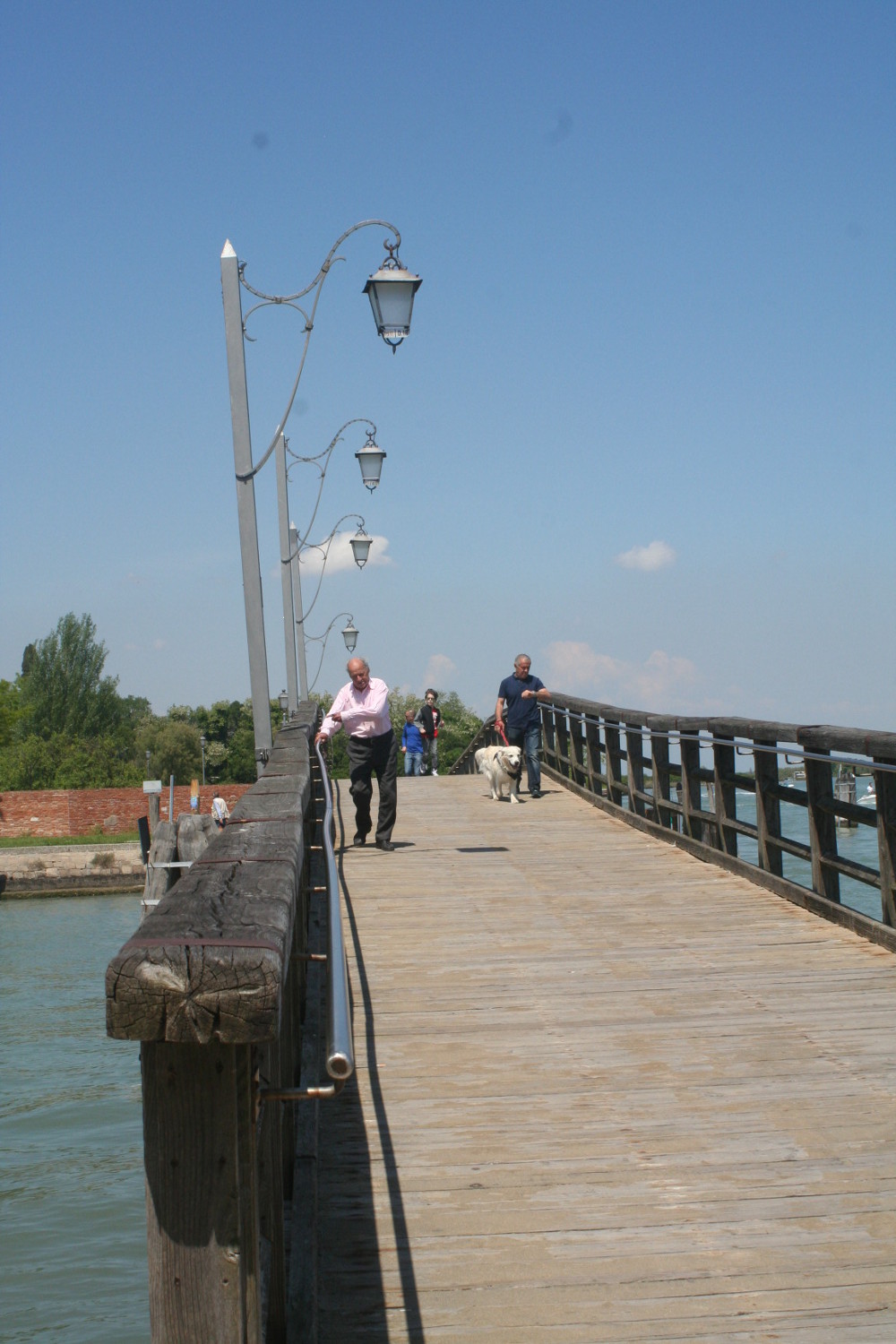 It can only be reached by boat (no sir, no cars or bus can go there) and vaporettos (our water buses). The water buses leave from the island of Murano and the journey takes about 45 minutes .

You can also reach it by water bus from Treporti (10 minutes) and Punta Sabbioni (30 minutes), two places on the mainland. 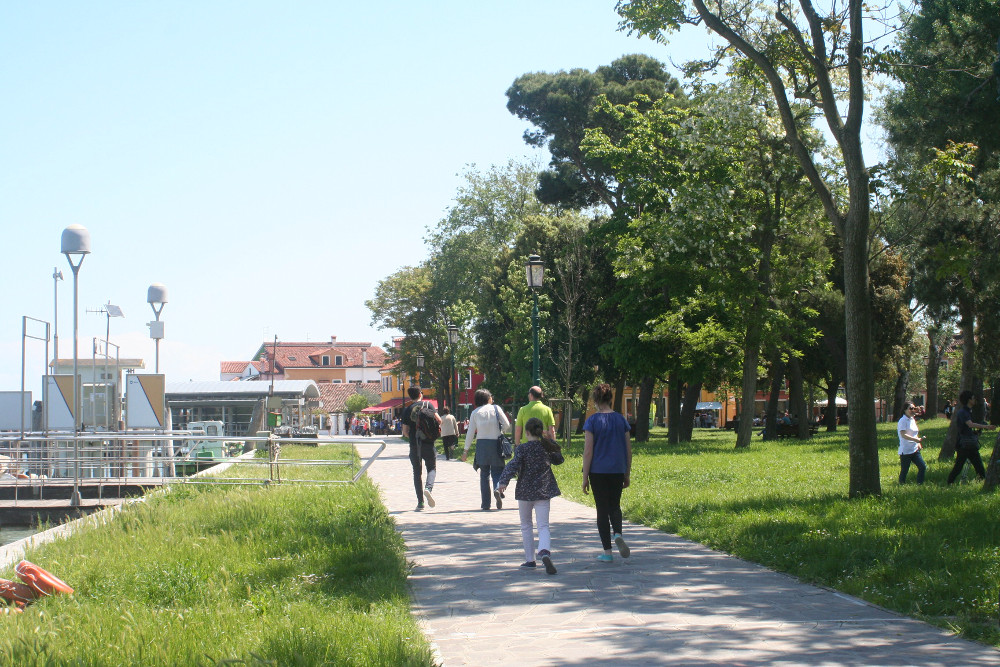 It is a very small concentrated island, there are about 3000 people living in it.

The legend goes that the island gets its name from Boreana, which used to be one of the areas of the city of Altino, the city from which the original Venetians came from, escaping from the barbarian invasions, mainly running away from Attila with his Huns and the Longobards. 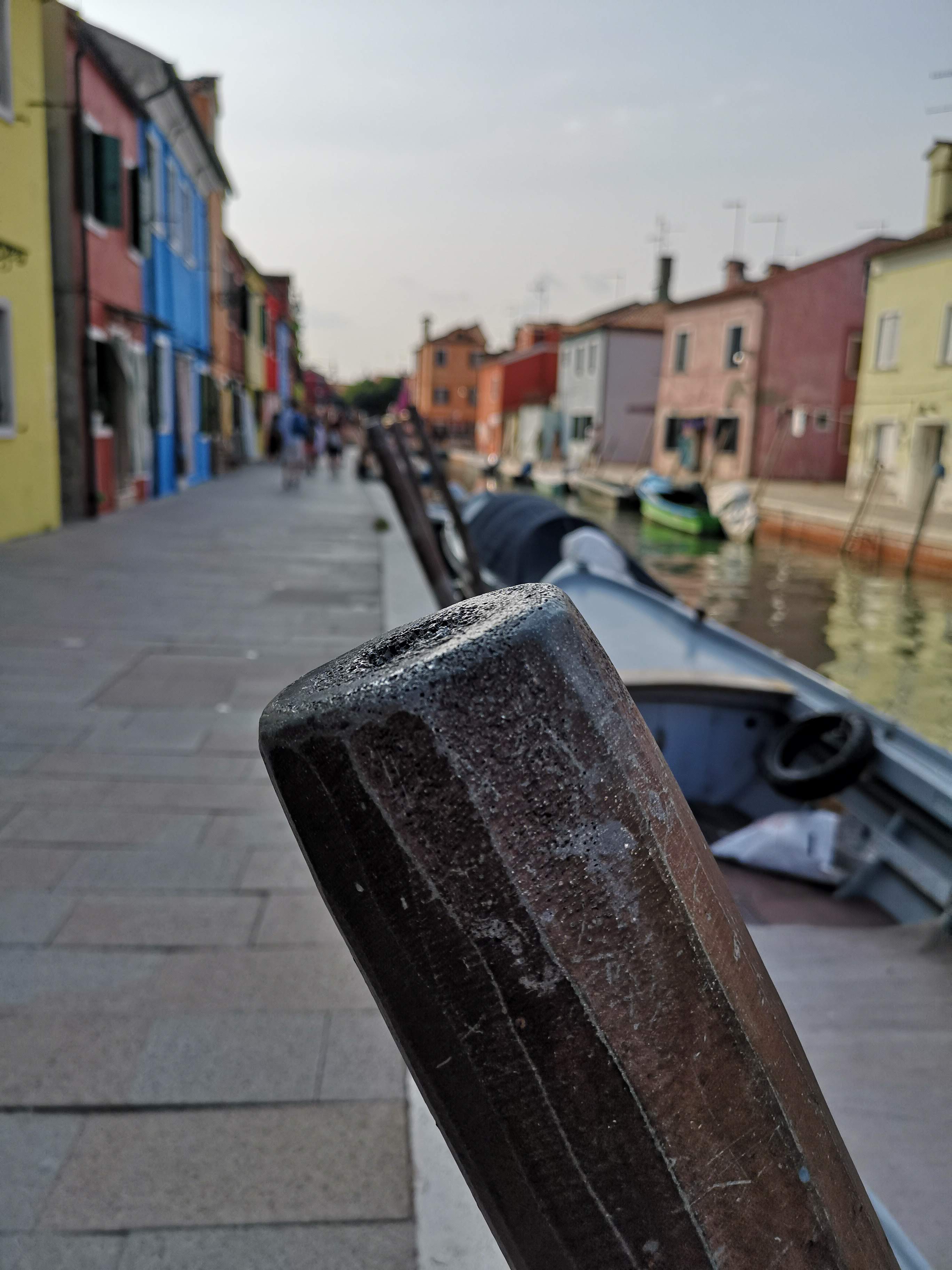 Like on the rest of the island of the lagoon, the first houses were built on wood poles, on stilts with walls made of reeds and mud and only starting from the year 1000A.D. the houses would be built with bricks (by the way, this is the way all of Venice is built, yes sir, even you that the other day would not believe me when I told you and you thought I was telling you a lie!). 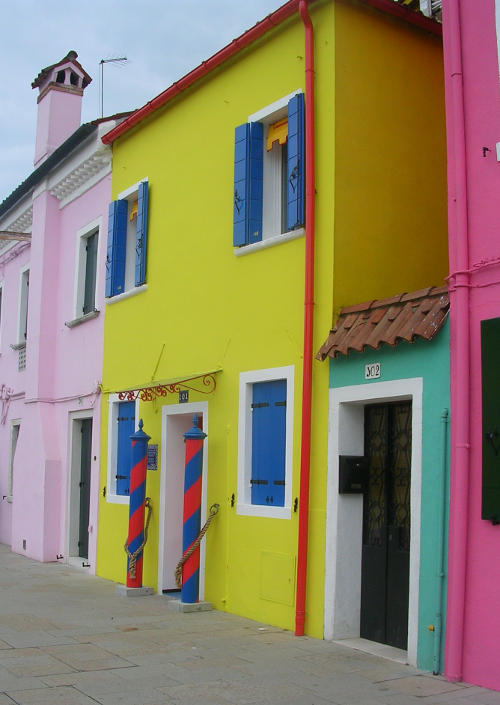 On a beautiful sunny day in May, we got off the vaporetto and started walking through the colourful houses for which the island is famous for.

We soon reached the heart of Burano and the only square of this village, Piazza Baldassare Galuppi, which was created filling up a canal: here there is also the church of San Martino, the only church on the island. 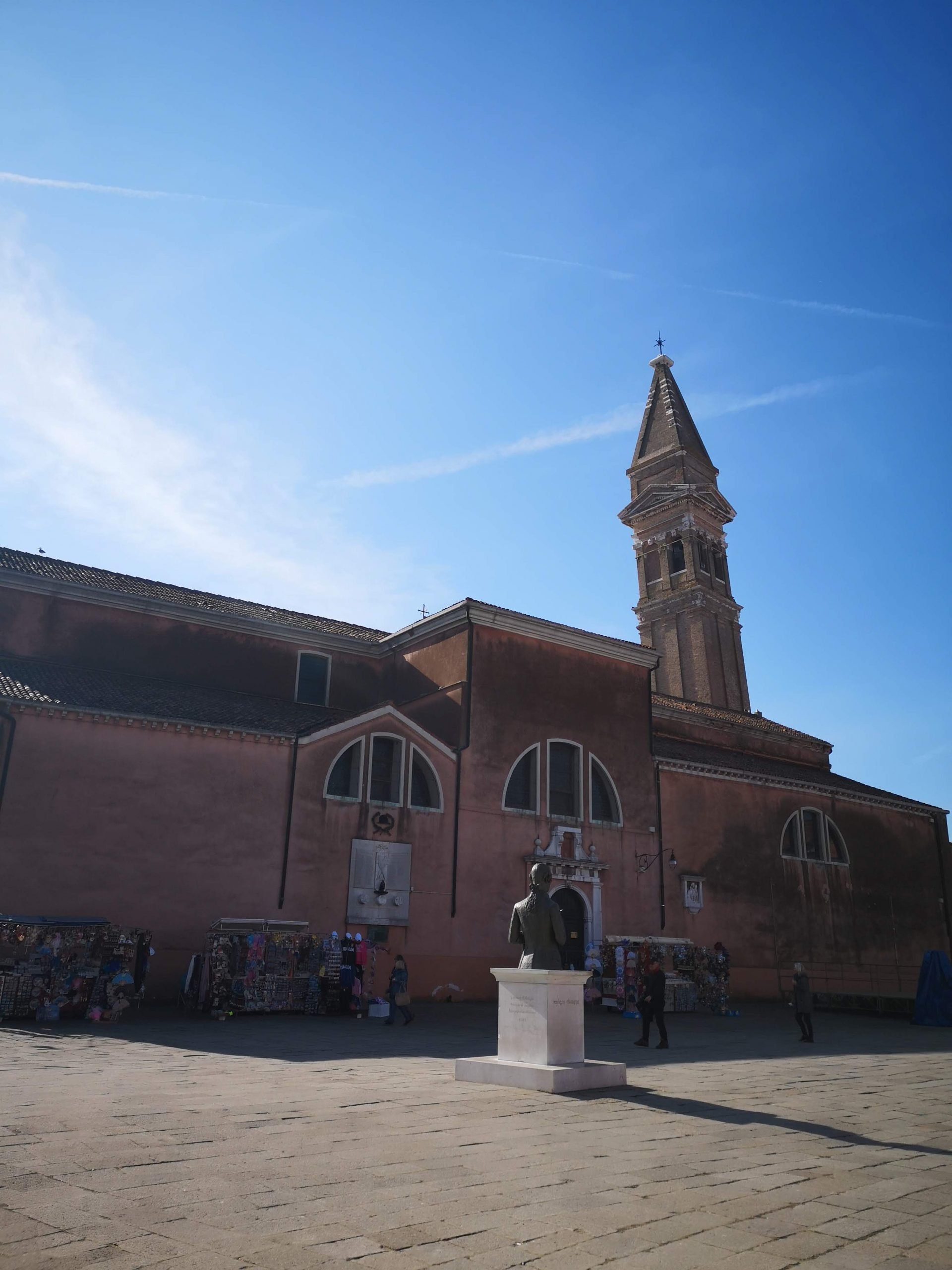 The church tower is also famous for being very leaning (sorry Pisa, we got one too!). This inclination is due to the partial subsidence of the foundation which is still based on stilts. Inside the church you can admire an amazing painting by Tiepolo (1725), La Crocifissione. 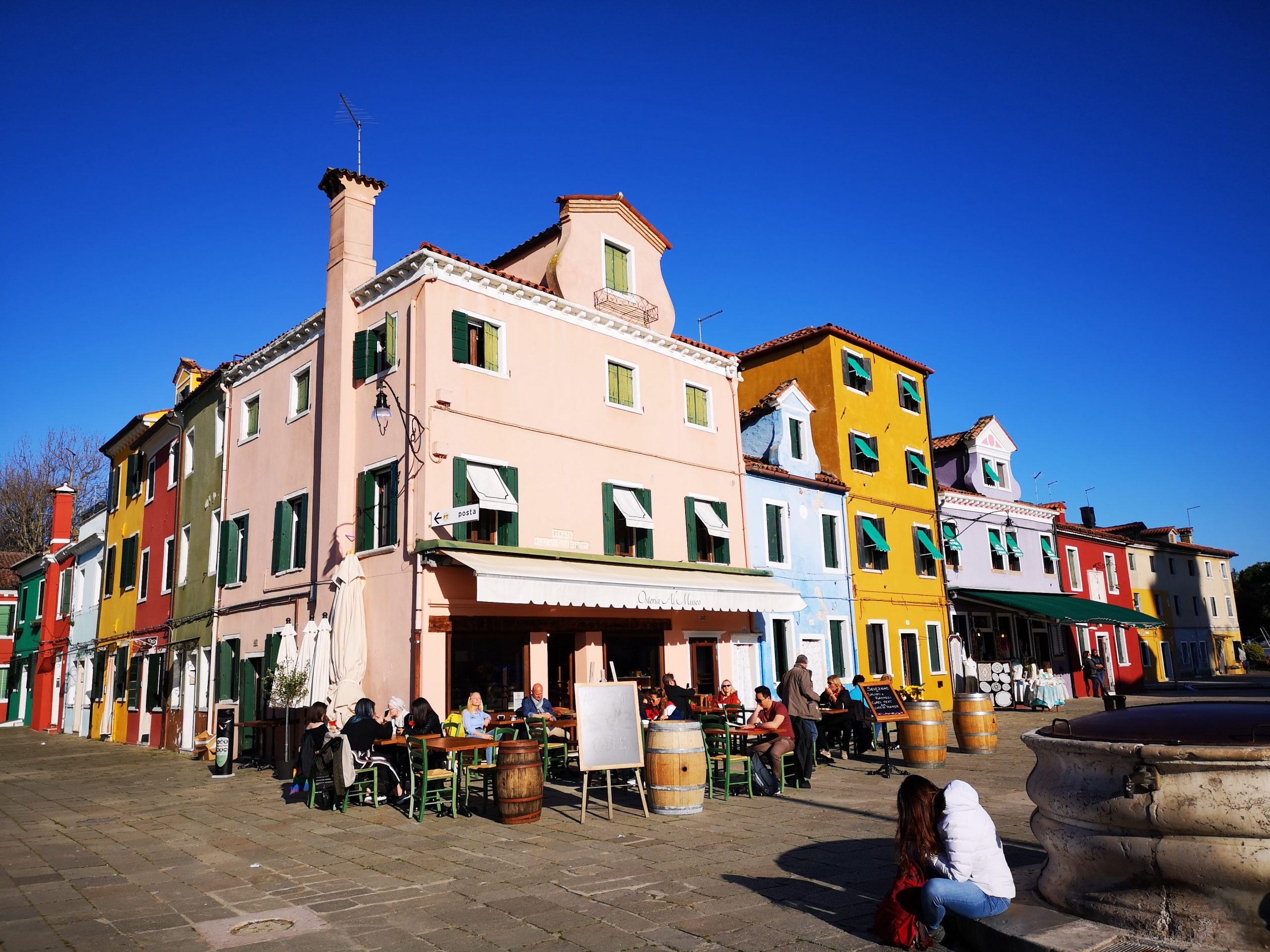 Burano: Why the bright colours?

So, I was asked by the people I was travelling with (namely my hubby, my son and a friend): “What is with these amazing and bright colours which all the houses are painted with?”

Well, I said, there are two schools of thoughts.

The first one says that the houses were painted in different colours to differentiate the various families which lived on the island and which were not many, of course. 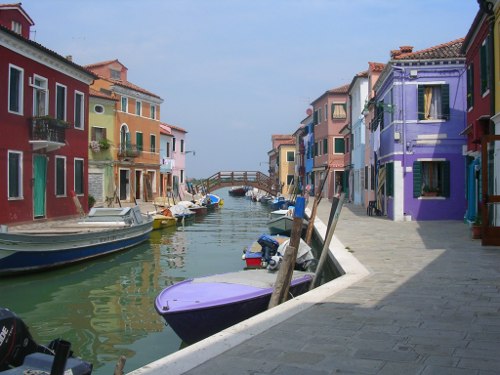 The second, and most credited, is the one which ties this colourful tradition to the fact that the fisherman painted their houses with such bright colours so they could find their way during the foggy winter days, those days when fog can be so thick that it can be cut with a knife, as we say here in Venice. 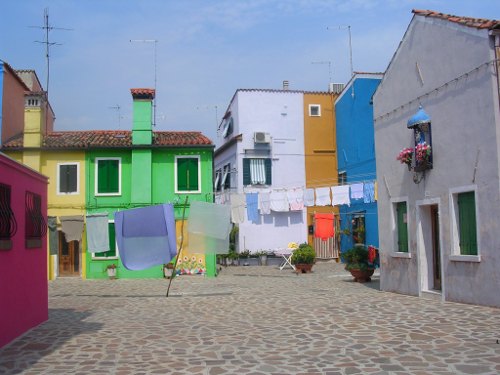 Burano, hanging in the sun

All visitors coming to Burano remain fascinated by the colourful houses that are reflected in the aquamarine waters of the channels, by the serenity and calmness with which the old ladies work with their thread and needles while they chat and laugh among themselves sitting outside their houses or in the small courtyards, by the children roaming free of dangers with their bicycles, by the balconies with their colourful flowers and finally by the fishermen hoisting the fish freshly caught from their traditional boats. 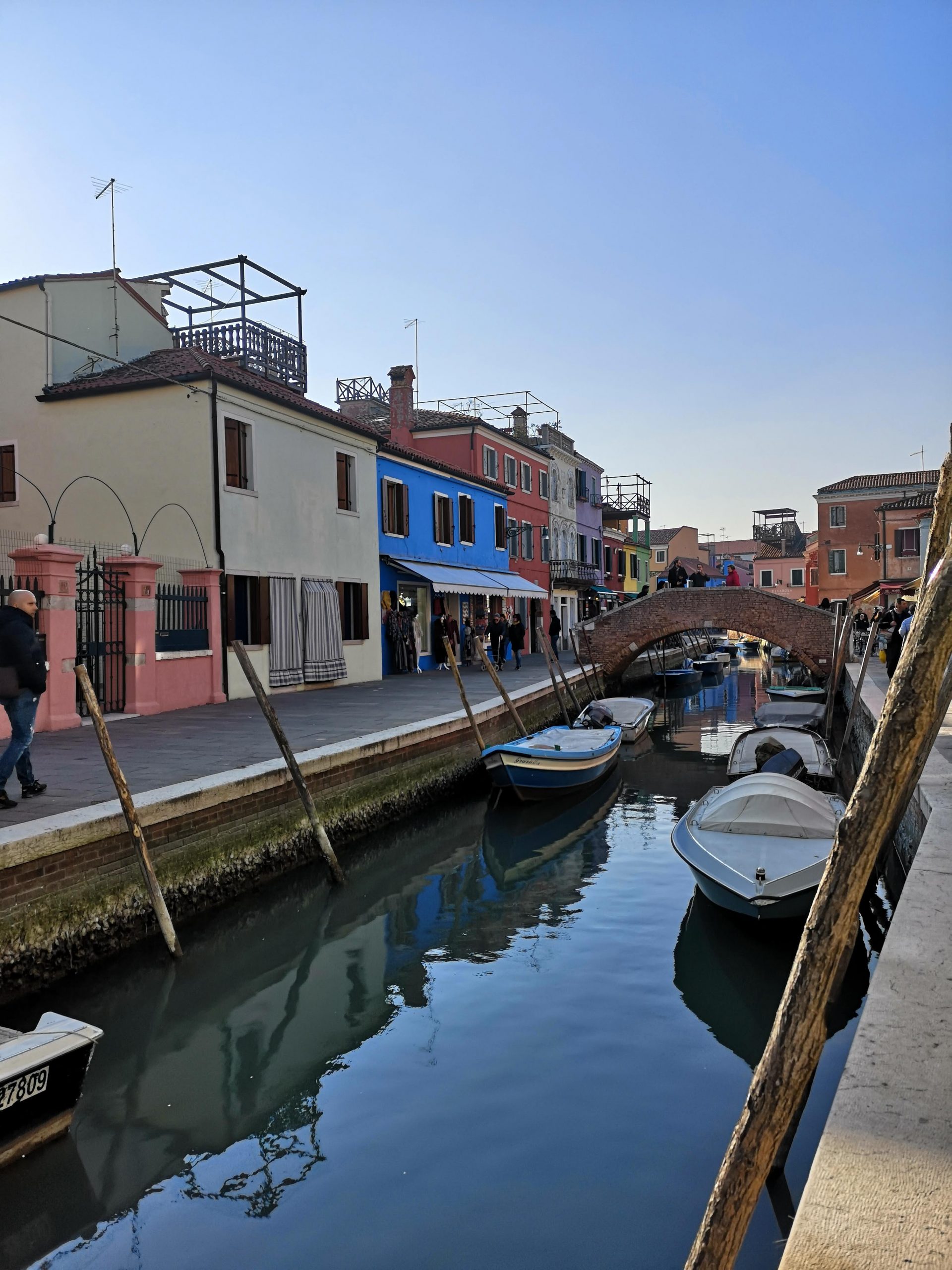 Fish that later can be eaten in a typical Burano restaurant : fish cannot taste any fresher. Try for example the amazing Risotto di Go at Ristorante Il Gatto nero, prepared by Ruggiero, the owner and chef!

Or the amazing restaurant in Piazza Galuppi, Osteria Al Museo, serving typical Cicchetti as well as home made pasta with clams and many more traditional Venetian recipes! 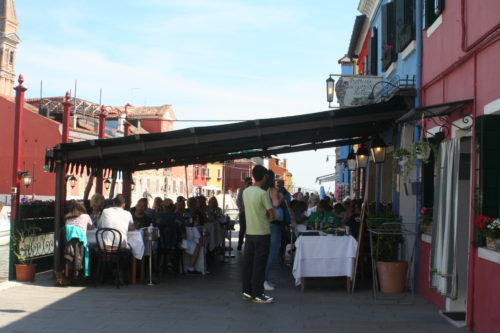 And after a nice lunch, one must pay a visit to an ice-cream parlour or a cake shop, where you can buy the typical biscuit of Burano, the “Bussolà” , made with egg based shortcrust pastry, not to be confused with the hard bread which goes by the same name but which it is sold in Chioggia.

Slowly walking, relaxing and breathing the sea air you will be able to admire the various shrines at the entrance of the calle and walk up to the island’s most famous house, “ Bepi’s Home” which is painted every year with different colours and different designs by its owner, a local artist. You can see here his website with some of the décors he made to his house in the past years. 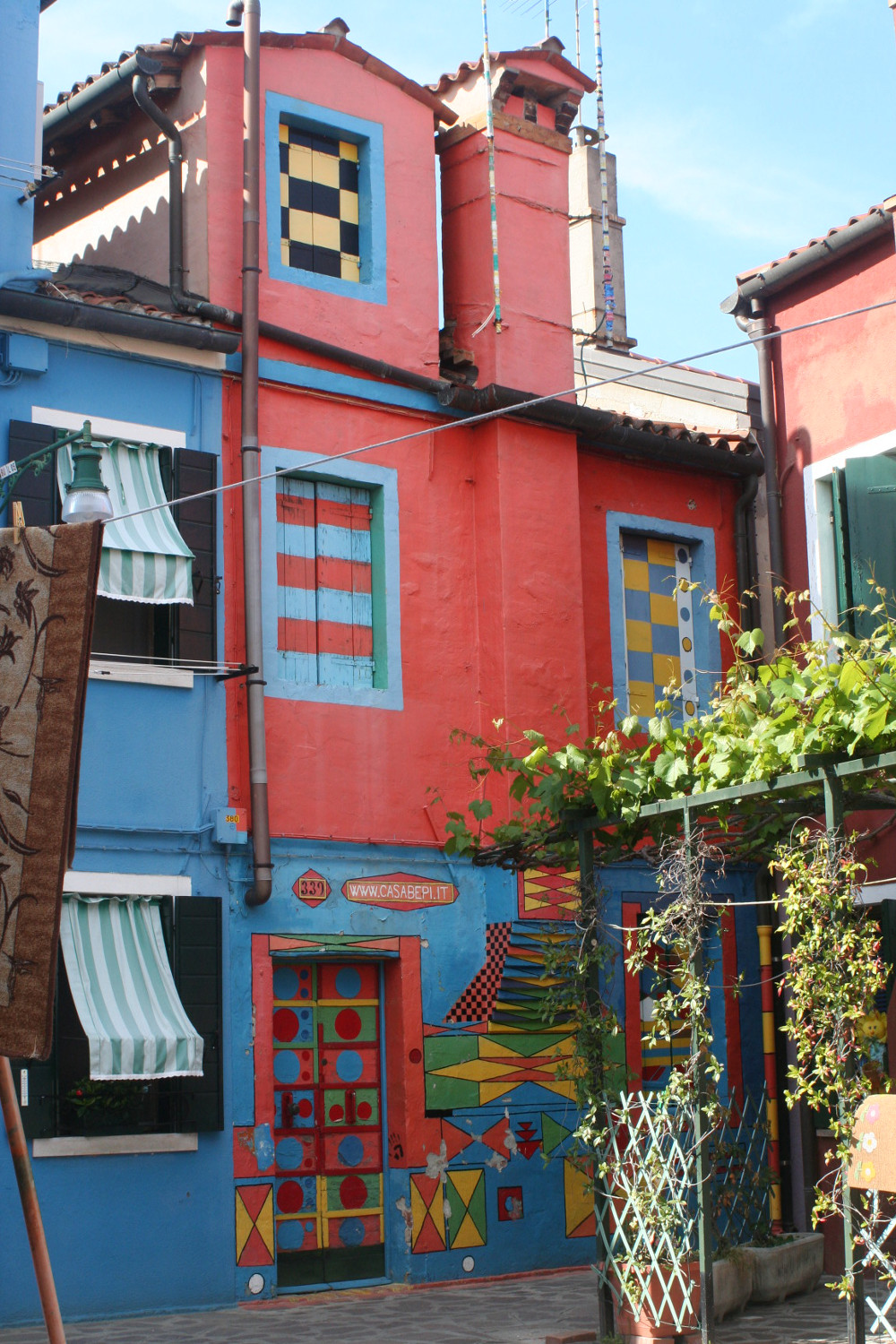 Then you can walk back to the main shops, where you can buy the famous Merletto, Burano’s lace, a tradition as old as the island. 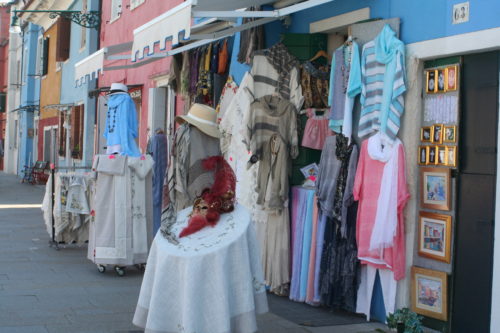 The legend tells of Niccolò, who was a very handsome young fisherman, kind and loyal, loved by all. He fell in love and got engaged with Maria who was just as nice and kind. 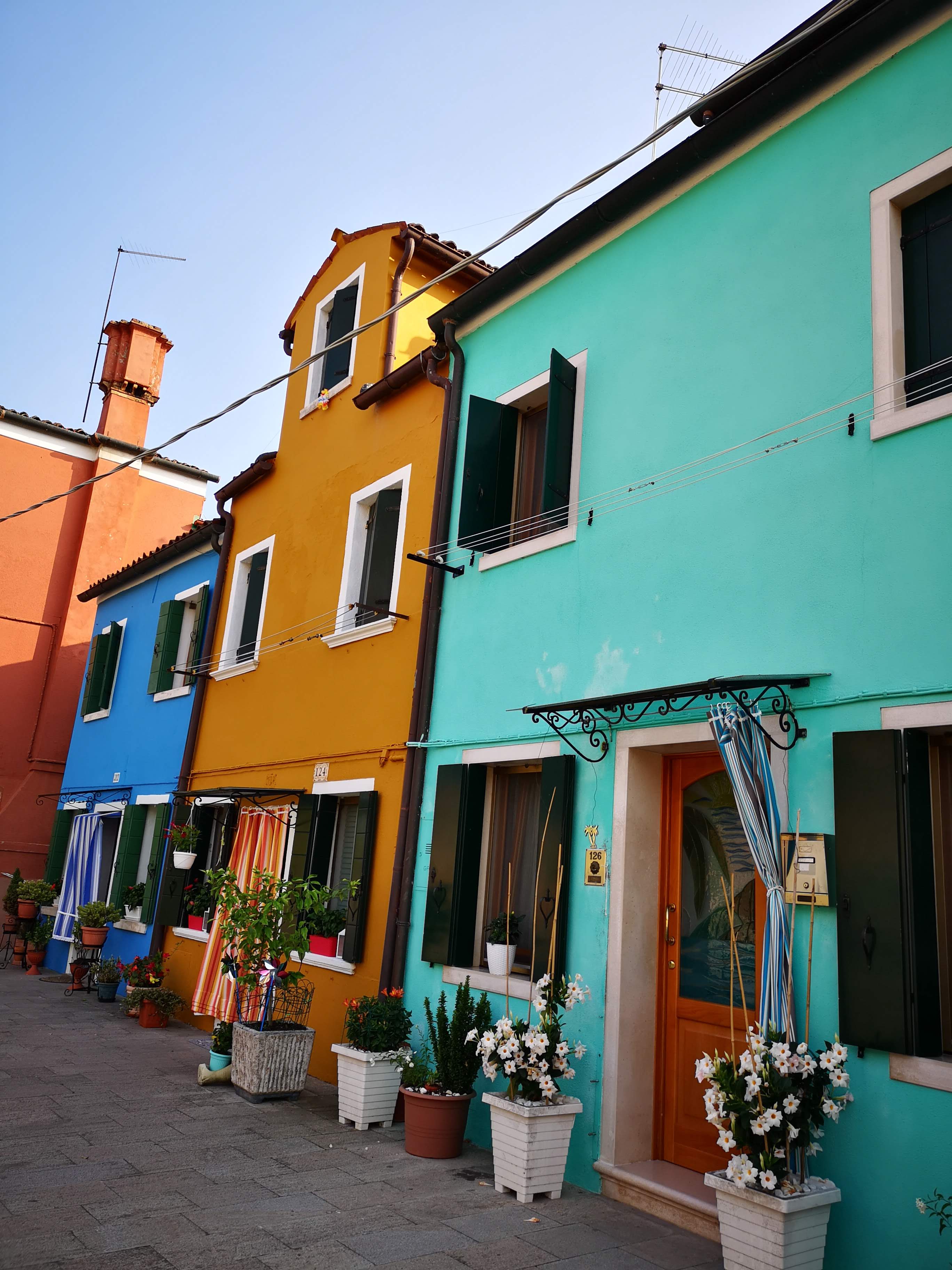 Few days before the wedding, Niccolò went to sea and as soon as he threw his nets, he heard a soft and sweet melody coming from the sea. Then he spotted four mermaids surrounding his boat, not talking, just singing and the sweetness in their eyes was more than a man could want. 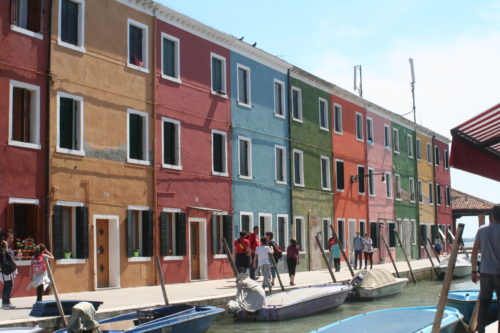 Burano in all its beauty

All of a sudden a vision of Maria’s face was there in front of him and this cancelled completely the spell which the mermaids song had created. The mermaids understood that the man was unreachable and one of them told Niccolò that it was so hard to find a man so committed to love that they had decided to give him a gift for his loved one.

A gift that, if she really deserved it, would have brought her great benefit. So Niccolò brought back home a beautiful embroidery crown made of sea foam for Maria to wear on her wedding day. 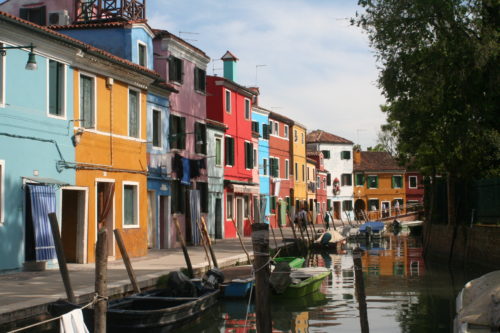 Niccolò got married to Maria and she wore the beautiful crown on her wedding day. Her friends, envious of her luck and fascinated by the beauty of the crown, tried to reproduce it with their threads and needles, starting, this way, the long traditional school of the Burano lace.

Another important tradition in Burano is the Voga alla Veneta. It goes back centuries: it was the most efficient method to carry the fresh fish in the neighbouring islands and up to Venice, before engines were invented. 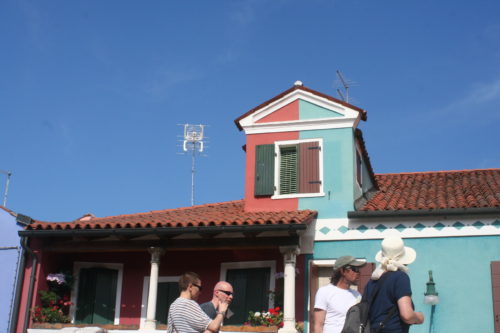 You can still see this tradition performed during the “Regata di Burano”,organised on the third Sunday of September. 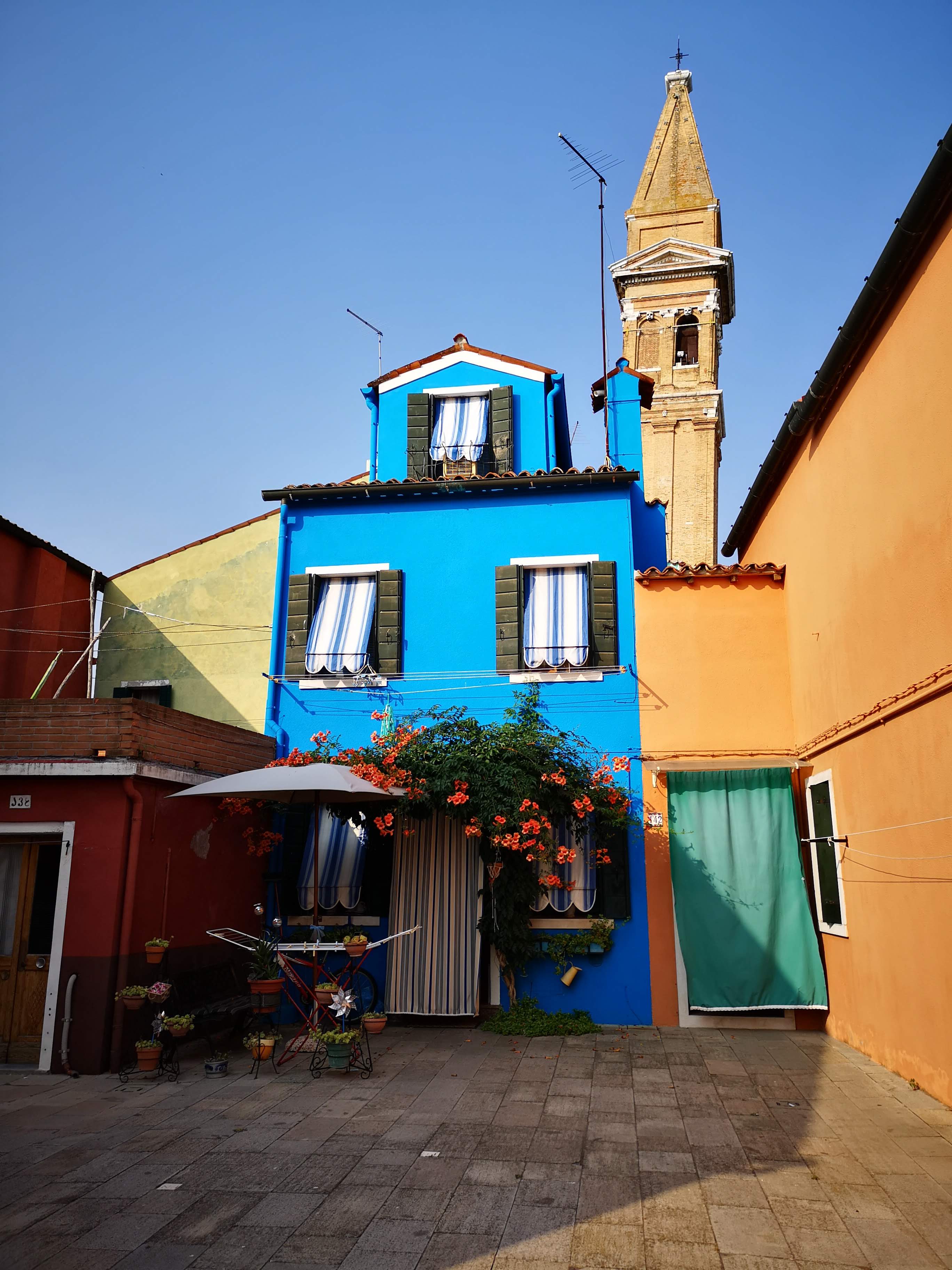 The locals from Burano have a typical way of rowing, calle Voga alla “valesana” or alla “buranella”, in which the oarsman rows on his own with two crossed oars.

So, as you can see, my client was right, THERE IS ABSOLUTELY NOTHING TO SEE IN BURANO!!!!!!! 🙂 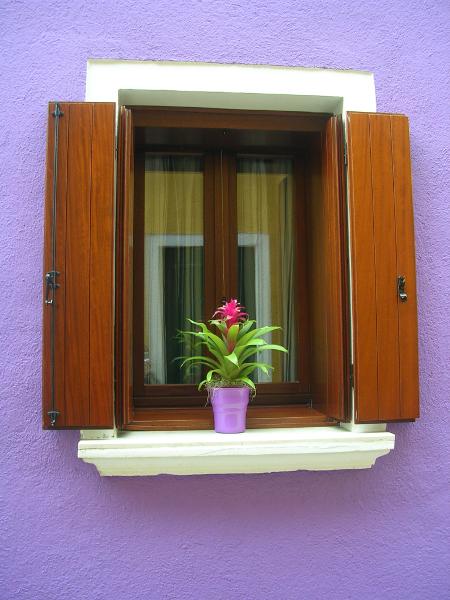 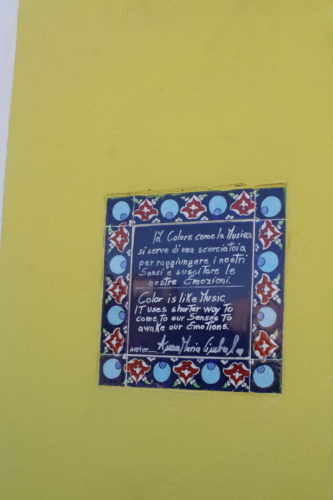 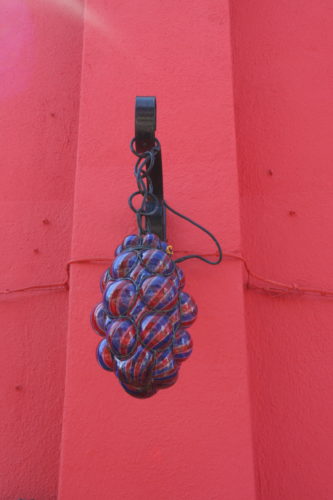 100 Place In Italy every woman should go

Festa del Redentore - an appointment not to be missed in Venice

10 Things about Venice you didn’t know