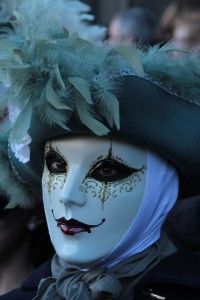 Venice Carnival 2013. Last Sunday, February 3rd 2013, the Carnival of Venice started for real. It was supposed to have officially started on Saturday, but torrential rain and pretty strong gales turned the day into a flop! I am not sure  there were many masks around Venice on Saturday! All most important events got cancelled, like the Parade of the Marie and a big Abba Revival concert in Saint Mark’s Square.

But Sunday!!!! Oh, Sunday was a gorgeous sunny day, more like Spring than Winter. The skies were a deep turquoise, not a cloud on sight! Absolutely the perfect day for going around in a fancy costume and taking photos!

So, with a couple of friends, we set off mid morning towards Saint Mark’s Square to go and see the famous Volo Dell’Angelo (The Flight of the Angel), of which I spoke on an earlier post.

Walking from Piazzale Roma to the Square we didn’t see many masks, not as many as we were expecting in respect to previous years.  I suppose the ugly weather of the day before put off many people. So by the time we got to San Marco, the square was pretty full, but not unbearable. We even managed to find the perfect spot right under the Campanile di San Marco and did not get squashed at all by the crowds (in previous years we did not even manage to make it to the square, because of the mass of people), even though the city of Venice estimated that there were more than 70,000 people admiring the show.

The angel was the young girl who won the Parade of the Marie contest last year, her name is Maria Finotto and she was wearing a beautiful Moulin Rouge style red dress. 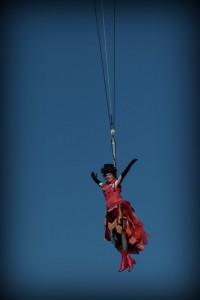 At Midday the bells of the Campanile started ringing and on the last strike, Maria started gliding down, very very slowly and very elegantly, waiving her arms, greeting the crowds below, just like a queen. Must say, she was amazing – remember she was slowly coming down attached to metal ropes on a sling, but she started from nearly 100 metres height! She said ” it was a great thrill and an unforgettable view. I’ll do it again immediately!” Surely this is not something for people who suffer from vertigo, like me!

Anyway, when she got down she joined the girls of the Festa delle Marie on stage and all the most beautiful costumes present in the square.

We decided to go and find a nice quiet place to eat, in Castello, where we knew people would not go to (the joys of being a local and knowing the little spots!).

As we walked along Riva degli Schiavoni lots of masks were standing there having their photos taken. Absolutely normal, you would say, apart from the fact that they were asking for money and they did not allow people to take a photo unless they got paid for it!  Completely ruined the spirit of Carnival!!!! That got me SOOOOOOO ANGRY!!!  I told them to F.O. (in Venetian, it was more colourful!) and set off to find a nice place to eat. 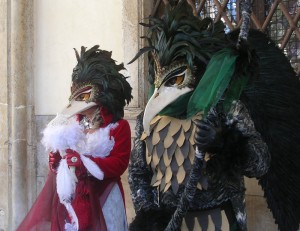 We found a small old Osteria in Castello, in Campo Do Pozzi, where we had some really good Baccalà mantecato e various fried cicchetti as well as some good wine.

We spent the rest of the day wandering around Castello taking lots of photos and breathing in the city, finding it amazing that only a few metres away there were hoards of people and here we were completely on our own in some little campo near Arsenale! THE REAL VENICE!

AN UNUSUAL GUIDE OF VENICE THROUGH YOUR SENSES

Top 10 tourist mistakes - What not to do in Venice

The Sile: The River of Silence in Italy