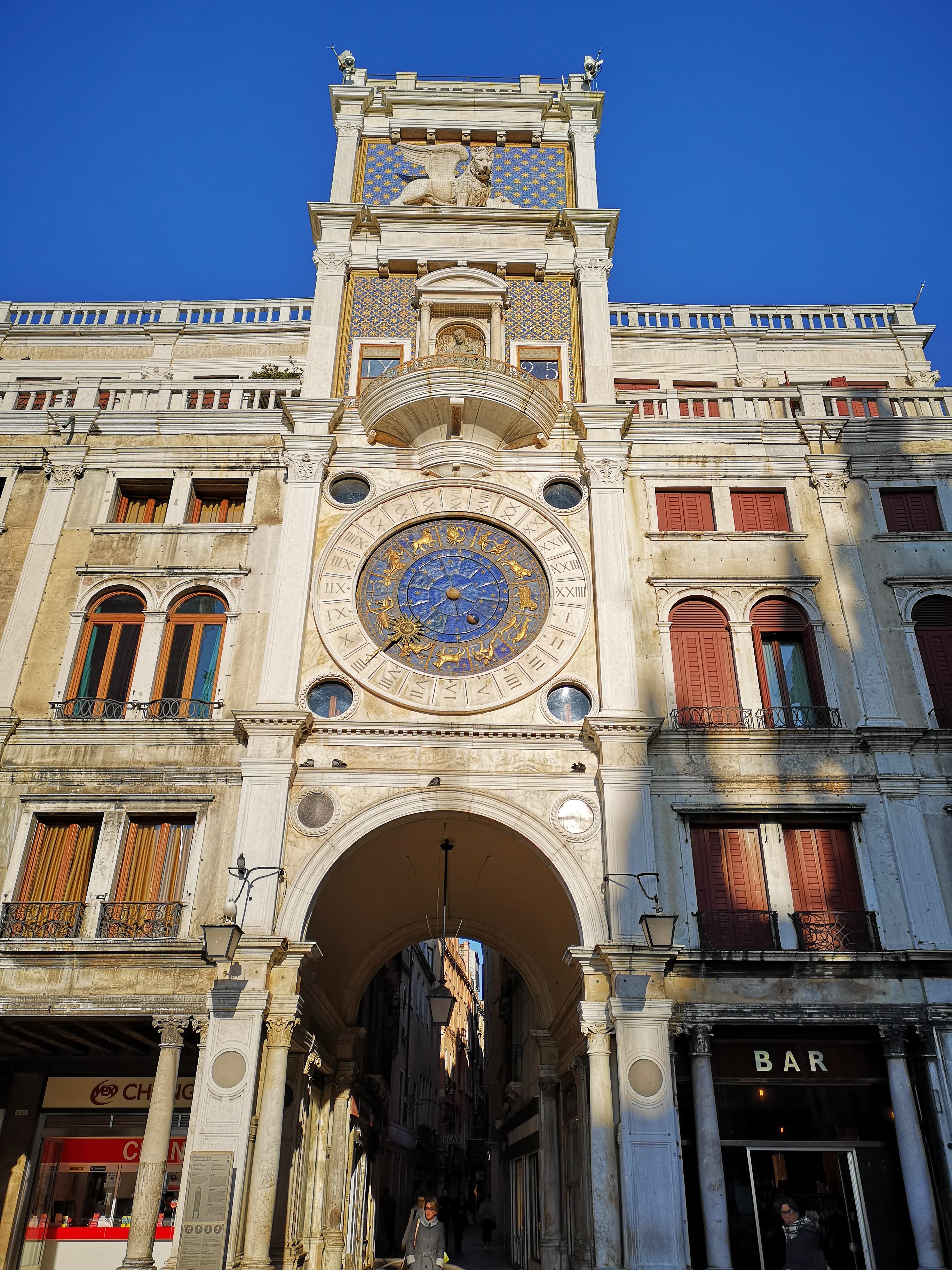 The Clock Tower of Venice

The stunning Clock tower of Venice has been watching over the city for over five hundred years, marking the time with absolute precision from a corner of Saint Mark’s Square. It is one of the most famous architectural landmarks in Venice: it overlooks the triumphal arch of the city’s neuralgic shopping street, the ancient Merceria.

Until 1998, the five very narrow floors of the tower were occupied, as well as by the clock mechanism, also by a guardian, who divided his rooms with the tolling of the Two Moors.

The Moors, the two statues, which dominate the Torre dell’Orologio of Venice, and which  are not moors after all, but were thus defined by the dark bronze patina that covers them, strike a blow, each one, every five minutes.

Which means that the poor guardian suffered 24 hourly strokes that in a day make 264 deafening shots.

At noon and midnight, the sundial also accompanies the two noisy and indefatigable moors. To make sure the passage of time is well marked, the sundial re-enacts the 132 shots made by each moor in the previous 11 hours.

Which means that the poor guardian and family listened to 528 chimes a day multiplied by 365 days, that is 192,720 strokes. 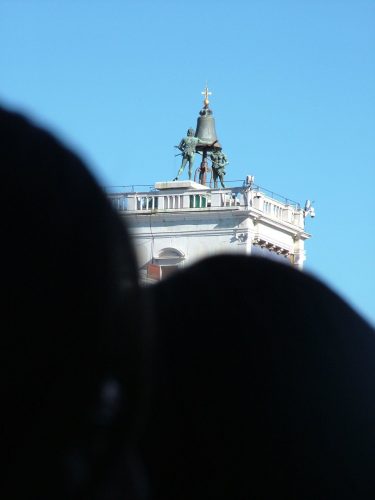 Visiting the Clock Tower of Venice

Today the Venice clock tower can be visited with a guide.

One can thus take a look at the complicated mechanism, which was later perfected by the self-taught Bartolomeo Farracina – G. Carlo Rainieri created the mechanism.

At the age of nine, Farracina, son of a modest boatman, instead of playing with friends, built machines that exploited the force of the wind.  And we owe to Ferracina, the presence of the Three Wise Men, who peek out from the tower only on the day of the Epiphany, undermining the mechanism of the days for a moment. (watch the video)

They do not even appear on their own, though, but in the company of an angel, who is also the protagonist of the Festa della Sensa, the festival of Ascension, which is a sort of a marriage to the sea. The celebration was reinstated in 1994 and provides that all the citizens connected in some ways with water witness the launch at sea of a ring with which Venice marries the lagoon. 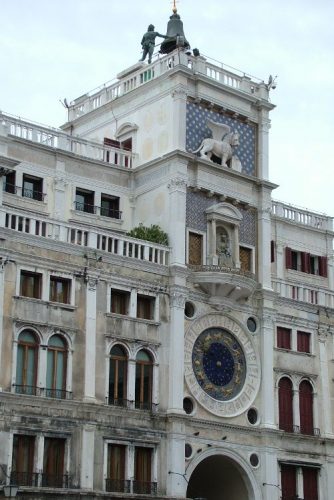 The mechanism of the clock tower of Venice has not remained the same since 1499, but has undergone several restorations commissioned to maintain its operation unchanged. The last one was completed in 2006. It is very interesting to look at the cogwheels, the counterweights system and the large 80 cm drums indicating the Roman numerals for the days.

Walking up the stairs, you arrive on the terrace where the Moors and the bell stand out, and from which you can enjoy a breathtaking view of the lagoon.

Venice Clock Tower offer an amazing wonderful view from the terrace, overlooking the Venetian bell towers and streets. There are more than 178, built as rudimentary headlights to send warning messages to ships in the lagoon in wartime. 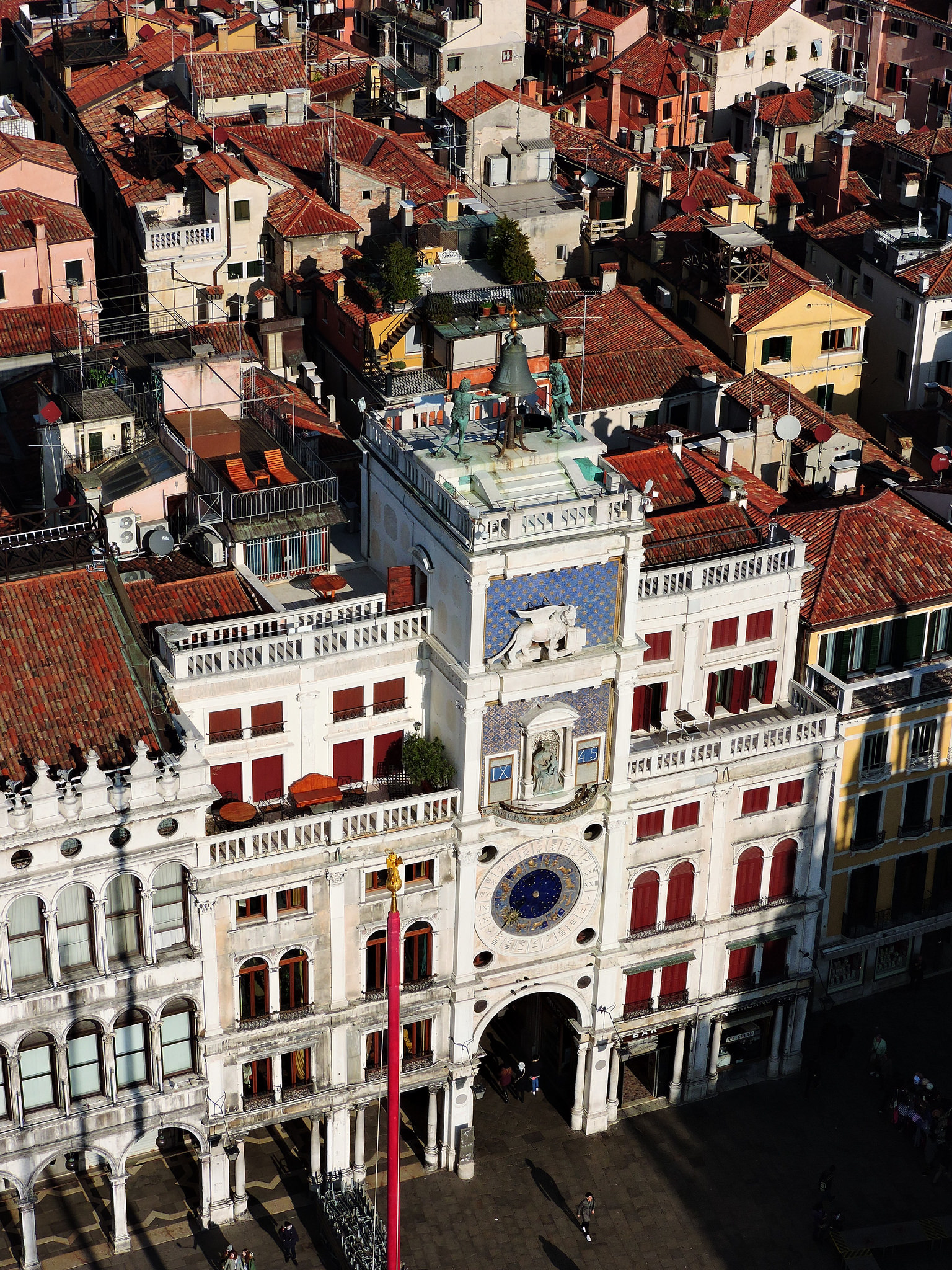 Venice Clock Tower: the statues of the Magi Kings

If you are in Venice on the day of the Epiphany ( or on the day of Festa Della Sensa) you cannot miss this short but unmissable event, that every year comes to life in Piazza San Marco, observing the Clock Tower.

From midday you can admire the Three Wise Men, the Magi King, in procession in front of the Virgin Mary and the Little Jesus. At the stroke of every hour, from the panel next to the clock, comes out this procession of wooden figures, representing the Nativity, just like a giant carillon.

They come out of a side door preceded by an Angel with a trumpet, bow before Jesus and Mary and fall into the ancient Tower. The statues are not the originals ones of 1499. but a faithful copy made in the 18th century. 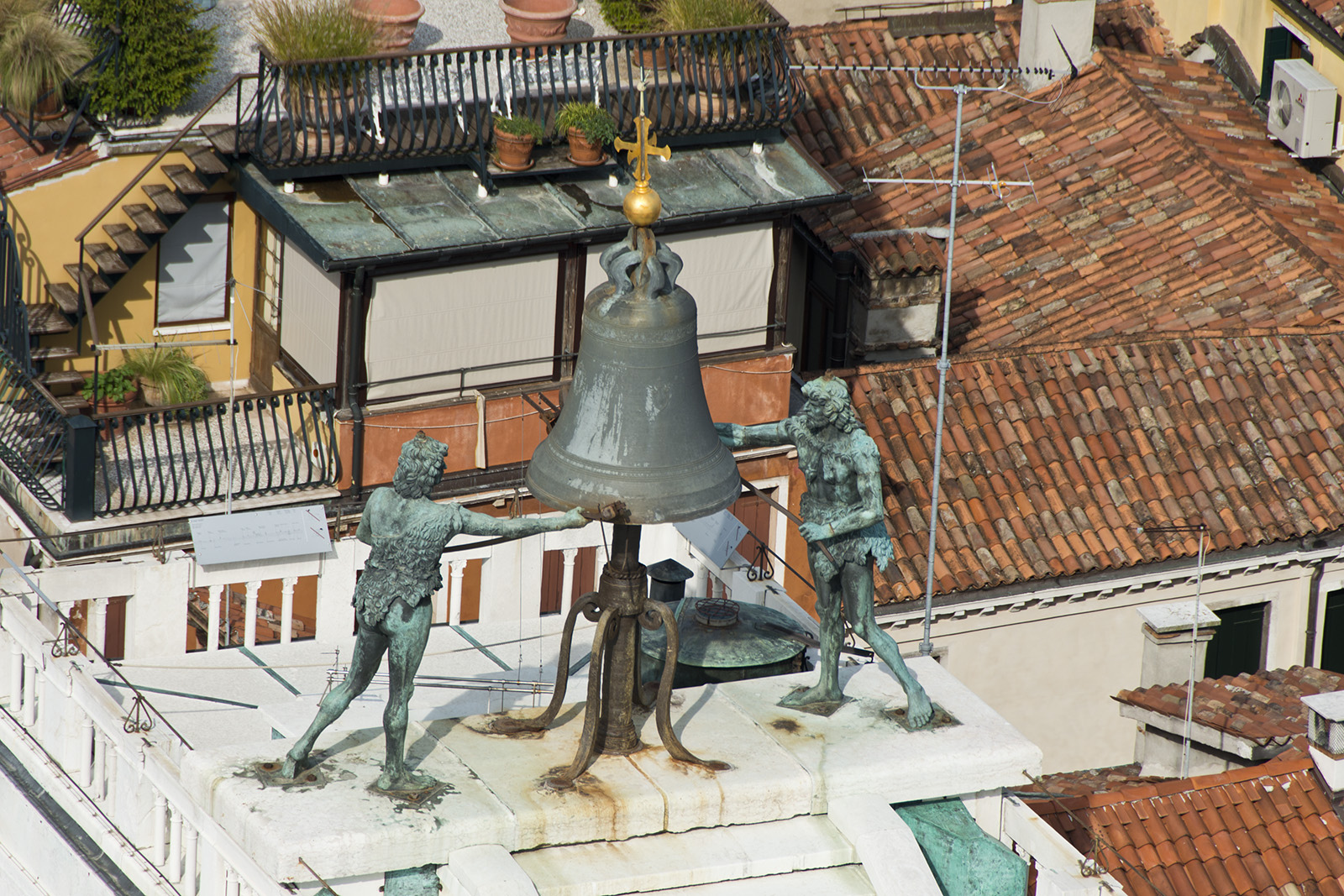 The building of the Clock Tower of Venice

The architect Mauro Codussi built the Clock Tower between 1496 and 1499, while the two side wings were added in the eighteenth century.

The complex system of the clock, which marks hour, day, lunar phases and zodiac, was created by the Emilia-based watchmaker Giancarlo Ranieri starting from 1493; according to legend, when the watchmaker had finished his masterpiece, the Inquisitors of State made him blind, so that he could never again build an equal one.

From the official site of Torre dell’Orologio

The heart of the Clock is a complicated system of gear wheels located within a large cruciform metal framework at the center of the Tower.

The true ‘engine’ of the entire timepiece, this can be broadly divided into 4 distinct sections; along with these there is the machinery for the astronomical clock face and the workings of the clock barrels.

Also known as ‘clock trains’, these 4 sections are similar in appearance and basically comprise: a barrel around which is wound a chain (formerly a rope) to which is attached the motor weight (100 kgs); an intermediate wheel; a rotating fan that serves as an aerodynamic brake to regulate the weight’s speed of descent and thus the interval between clock strokes. The fans are equipped with a ratchet that makes a very recognizable sound; this is activated at the end of each series of strokes and serves to disperse the accumulated kinetic energy when the rotating mechanism comes to an abrupt halt.

The clock train transmits the impulses, which enable the pendulum to continue its isochronic oscillations. It also comes into play at fixed intervals to trigger the other trains of wheels and pins.

By means of thin vertical rods, it activates the barrel machinery every 5 minutes; as a result the minute barrel rotates through 30° (1/12 of a turn). Every 60 minutes, the hour barrel does the same.

Upon each hour, the train mechanism for the Two Moors is activated.

This is why the mechanism is described as a ‘re-striking’ one. With the hammers they hold, each Moor strikes the bell on the top of the tower a total of from one to twelve blows, depending upon the hour.

Finally, every 12 hours, the 132-stroke train is set in motion. These 132 ‘meridian’ strokes occur at midday and midnight before the Moors strike the bell. They are rung by 2 supplementary hammers placed around the circumference of the bell; the number of strokes corresponds to that of the strokes hit by the two Moors in the previous 11 hours. The barrel mechanism also operates the astronomical machinery via the Moors wheel, which goes through a complete rotation every two hours, and a 22-tooth pinion. This latter goes through 12 rotations a day, turning all 264 teeth (22×12) on the large

wheel, which turns the sun clock-hand through one entire circuit per day.

Finally, via a return mechanism and a long axle under the clock machinery, the Barrel Mechanism also operates the hour hand on the clock face giving onto the Mercerie.

The whole thing is driven by means of 5 train mechanisms, periodically recharged by the raising of the weights.

The pendulum and the anchor escapement regulate the perfect release of energy, so that the mechanism works in a constant, even manner. Still perfectly functional, the entire structure dates back to 1753-57, when Bartolomeo Ferracina significantly modified the original machinery built at the end of the 15th century by Ranieri.

Watch The Video of The Clock Tower of Venice

On 6th January 2019, my photographer friend Benito Jiménez-Sauma, one of the photographer present in the book Dream of Venice Black and White, took this lovely video of the apparition of the Three Wise Men from the Clock Tower of Venice!

I hope you will enjoy it as much as I did!

A small jewel of medieval art: the Abbey of Pomposa