Festa del Redentore : Another year goes by, another hot and sticky summer strolls in through the canals of the lagoon and another major appointment for all Venetians is fast approaching.

It is Festa del Redentore (The Redeemer’s Celebration) which this year will take place on July 13th and 20th. 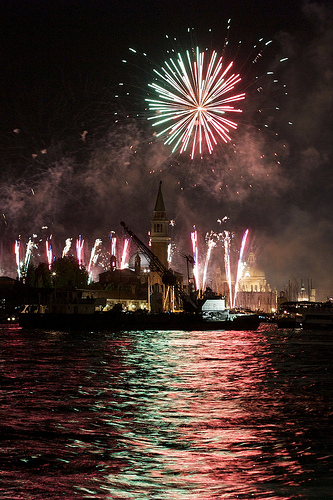 This event draws thousands of people to the City of Water to admire the amazing and breathtaking firework display which takes place on the Saturday night on Saint Mark’s bay, illuminating the water of the lagoon with a myriad of colours and nuances, reflecting the firework shot high in the Venetian skies.

The Festa del Redentore reminds Venetians, and not only, about the end of the plague which devastated the Serenissima Repubblica di Venezia and the rest of Europe back in the 16th century. The Black Death killed thousands between 1575 and 1577, including Titian Vecellio, the famous painter, who died in 1576 in his nineties.

The data tell us that more than 50,000 people died during this pestilence, people from all walks of life. The disease did not make any distinction if you were rich or poor, intellectual or not.

The most probable cause of the contagion were the rats which were travelling aboard the ships coming from the East and which carried the horrible disease and easily spread it, in an age where hygiene was not a major priority.

Back then the pestilence was believed to be a male sacro (a sacred evil), some kind of divine punishment. So on 21st September 1576 the Venetian Senate approved the proposal of the Doge Alvise Mocenigo to take a solemn vow to ask for the end of the plague and the salvation of Venice. The city would have built a temple : “che i successori anderanno solennemente a visitare . . . a perpetua memoria del beneficio ricevuto” (all future generations will go solemnly to visit …in memory of the received benefit).

A temple dedicated to Christ the Redeemer would be built on the island of Giudecca in place of the small church of S.Maria degli Angeli and on 3rd May 1577 the first stone of this amazing temple was laid. Then, on the third Sunday of July of the same year, the Doge Sebastiano Venier declared Venice free of the infection and few days later a small wood church was built on the Giudecca and a bridge made of boats and 330 metres long, was assembled to connect the City to the church and to allow the pilgrims lead by the doge to cross it and reach the island. 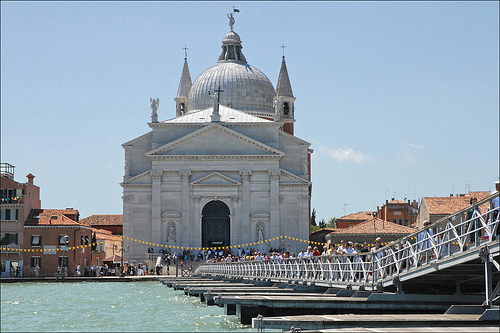 The church of Redentore with the bridge of boats by dalbera

This bridge is still built nowadays to allow people to cross over and reach the Redentore Church. Church which looks like it does now thanks to Andrea Palladio, who designed and built it in just 15 years.

Of course the celebration is not limited to the church of Redentore and the island of Giudecca, but it spreads all over Venice, all over the campi and corti and altane, following a 400 year long tradition. Numerous celebrations and events take place all over, among which the Regata del Redentore which is followed by thousands of people.

The firework display is actually a fairly modern tradition, dating back only to 1978. It lasts about 45 minutes and it is grandiose: exploding over S. Mark’s bay, the fireworks reflect all over the lagoon and can be seen way into the mainland.

All of the lagoon is filled with big and small boats, packed with Venetians and tourist, eating, drinking, singing and mainly admiring the display. Over 1500 boats usually stand on the lagoon and more than 30,000 people fill the banks of Saint Marks just standing or sitting in long tables jam packed  with traditional Venetian food and drinks (poenta e ossetti, salsicce, bigoi in salsa) . 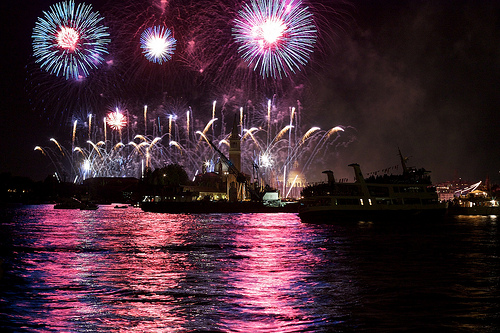 Burano, the Rainbow Island - Must see in Venice