HOW TO DISCOVER THE REAL DOLCE VITA IN ITALY 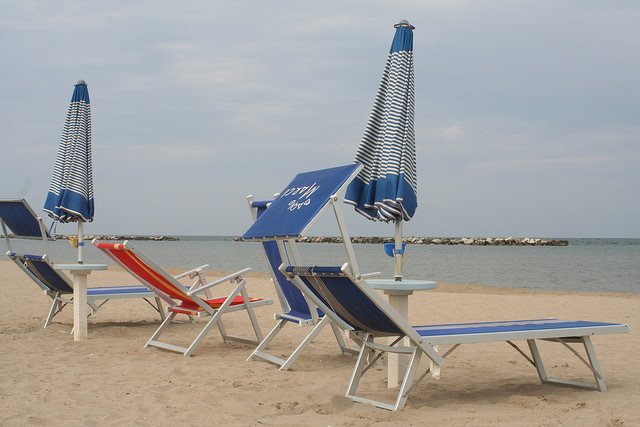 I usually write about Venice and the Veneto region, but on this occasion I want to bring to your attention a region of Italy where you can still experience the real Dolce Vita, the same one Federico Fellini depicted in many of his films, the one that so many tourists and expats come in search of and many times leave our country in disappointment because they did not find it.

The region I am talking about is Emilia-Romagna and in particular I am going to bring to your attention the town of Bellaria Igea Marina, a small seaside resort on the Adriatic coast of Italy which somehow has managed to retain all the beauty and authenticity which Italy has been known for.

Here I found again what I honestly thought Italians had lost: la joie de vivre (the joy of living), the art of making people feel welcome and loved, the amazing food and wine: that is what you have all come to know as la DolceVita.

It all started few weeks ago, when one of my husband’s friends and colleagues asked him if we could go for few days in her 3 star family’s hotel in Romagna, at Hotel Eliseo, and help them out a bit with some social network training. 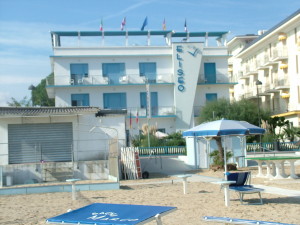 We needed the break and the location was not very far from Venice, so we immediately agree. As the planning for some proper marketing training was getting on the way, Maria Regina Rubinetti (whose family hotel we were going to) asked me if I would like to take some cooking lessons with her Nonna.

You can imagine immediately my response: a 3 day cooking course with an authentic Romagna cook, learning to make proper tagliatelle, strozzapreti and more? Was she kidding? My bag was already packed and ready to go 🙂
And as we started talking about it and she could see my enthusiasm, she came up with the idea to organise a bigger event, to get other food & travel bloggers involved and to bring her little town to the attention of the rest of the world!

And within a week #lovingRomagna Food Travel Blogger Event was born. I was put in charge of gathering a bunch of fellow bloggers and get them to come over to Bellaria Igea Marina on a cooking experience of a life-time.

As you can imagine it did not take me very long to convince them all: who would be so crazy to turn down the opportunity be welcome and pampered all day long, to taste some of the best cooking and wines in Italy by the Adriatic sea in September and to get to take photos and write about it too?

So from 16th till 18th September 2014, Bellaria Igea Marina and its people, which by now were preparing to close down for the winter season, welcomed a group of crazy and loud people (yes, I know, I was the loudest of the lot), armed with cameras, video cameras and smart phones, strolling around all corners of this little town and beach, taking pictures of everyone and everything (and I mean everything), filming the strangest shots and branding their phones like weapons of mass destruction (you know, when you go around saying press the button, press the button!). 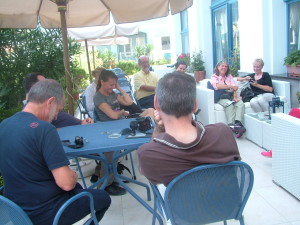 Yes, that is what happens when you let loose a group of bloggers in a relative undiscovered spot in any part of the earth and you add good food and wine: they all go picture crazy!

But the meet-up was not just about taking photos of this amazing little charming town. It was about tasting and learning how to cook the amazing food of Romagna from Nonna Violante, savouring the great wines of the gods like Sangiovese and Albana, relaxing by the beach in September, nearly deserted but still sunny, and discovering a part of Italy which many English speaking people never heard about. It was about experiencing Italy like only Italians know how to and just like they have been doing for many and many years! 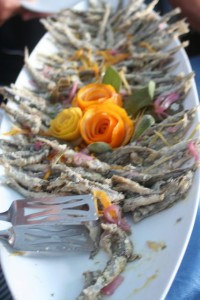 So in the next few posts I will tell you all about this wonderful event, called #lovingRomagna, organised by Hotel Eliseo *** in Bellaria Igea Marina.

But first let’s start with a bit of information.

Bellaria Igea Marina is located in the Northern corner of the province of Rimini on the Adriatic coast, and, thanks to its position, the resort climate is in between a Mediterranean climate and a temperate continental one. In practical terms it means: cold winters, pleasant springs and autumns, hot summers!

Bellaria and Igea Marina were originally two separate areas, but the two resorts have become a unique municipality from 1956, when the great flow of incoming tourist completely changed the look of the two villages. 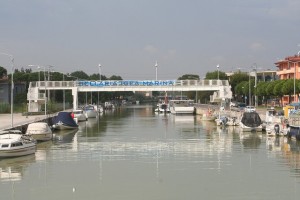 The name of Bellaria (from Bell’aria = beautiful air) appeared for the first time in a document dating 1359, referring to a fortified farm located in that area and which belonged (among its many owners) also to the Malatesta, the famous family who run most of the Romagna territory during 1295 and 1528. Igea Marina was the name which was given by Vittorio Belli to a small village at the beginning of the 1900s. Dr Belli, who was a doctor, planned a sort of a holiday village (on the style of those which we now call holiday resorts) in the middle of a pine forest (of which he had planted all the trees). T

he name he chose for the village was Igea, the daughter of Asclepio, god of medicine. All that remains today of the original planned village are the urban orthogonal area and the criss cross roads which all bear the names of Latin poets.

Bellaria Igea Marina is the youngest municipality in Italy and it has grown enormously in the last forty years. This is thanks to the fact that at the beginning, the village people used to rent their own homes during the summer to the various visitors who came to enjoy the beach and the hot weather.

They rented their all homes and used to go and sleep in their garages or sheds for the summer period. As the years went by, these very entreprenerial people started building small guest houses (pensione) to host the increasing flow of tourists coming to their location. And so now both areas are studded along the shore by small pastel colour well blended in 3 star hotels, mainly family run, mostly located right by the seafront.

The resorts offer more than 7 km of clean fine sandy beach and shallow waters, which are ideal for families with small children. Hotel Eliseo, part of Piccoli Alberghi di Qualita’, and many other hotels offer their customers special agreements with bathing establishments and therefore sunbeds and parasols, games, sports and entertainment, which are all included in the price charged by the establishment. Hotel Eliseo also supplies free beach towels to their guests (less weight to carry around on a plane!). 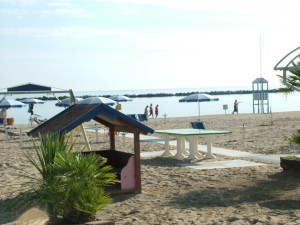 The best season for families with small children is of course June and July, with the possibility of spending the sunny hot days on the Blue Flag sandy white beach, with the shallow clean water and the lifeguard towers on hand every few hundred meters. Not only, all bathing establishments organise children entertainment on the beach for the little ones and there are plenty of little kiosks and bars dotting the shore, all offering the typical “piadina” (flat bread stuffed with cheese and cold cuts).
But in my own personal opinion the best periods for all other travellers, the times of year when to get the most out of this little genuine location, are May and September. During these two months you can really appreciate the Adriatic sea at its best: the weather is still pleasant and not too hot, people are not overcrowding the shores and you can really relish in the relaxing atmosphere which permeates this particular area of Romagna. Gone are the discos and clubs, the noisy crowds of young people and the hoards of tourists: there is pure and absolute stillness to be savoured here (as well as the food and wine of course!).

But peace does not mean that the place is dead! On the contrary, with a short walk to the historic centre of Bellaria (or by taking a trip on the little Choo Choo train which runs hourly around the resort) you will find yourself in the middle of cafs, ice-cream parlours and artisan shops (open till late in the evening, when the locals take the typical Italian evening summer stroll)! 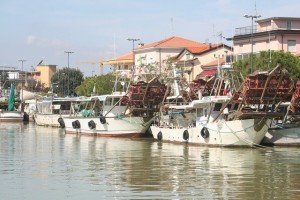 You can visit the little seaside port of Bellaria and if you go there in the morning observe the fishermen on their way back from the night catch. Or you can visit with a free guided tour the Saracen tower, built in the seventeenth century to cope with the constant invasions of Turkish pirates. Inside is housed the Shell Museum, a malacology collection full of interesting finds.
You can also take short trips on a little motorboat, taking little excursions along the coast – even at night to admire the stars from the sea!
Lovers of nature and outdoor life can take relaxing and peaceful strolls in the beautiful Parks of Gelso and Pavese – Hotel Eliseo offers also free use of Nordic Walking sticks.
Parco del Gelso impresses with its picturesque lake, offering a panorama of great beauty. Do not miss also the “Pathways of the Uso”, a nice walk along the bike path on the river bank of the river Uso up to San Mauro Pascoli. They are about six kilometres of walk where it is easy to come across different species of birds, sometimes of large size like herons or very small ones as the kingfisher that nests in this area. And both in Bellaria and Igea Marina the avenues that form the city centre are pedestrian areas lined with trees, ideal for walking and shopping or just relaxing. 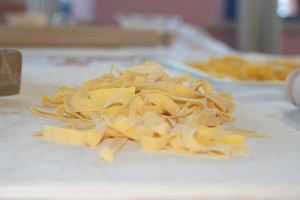 So, if I have tickled your curiosity do not miss the next post, where I will be telling you all about the food and wine of Romagna, where to sample the best and where to learn to cook it with a real Romagna lady: Nonna Violante!

The Art of Craft in Venice - Etching

Veneto off the beaten path - unusual things to do

Bacaromi: a luxury bacaro in Venice?