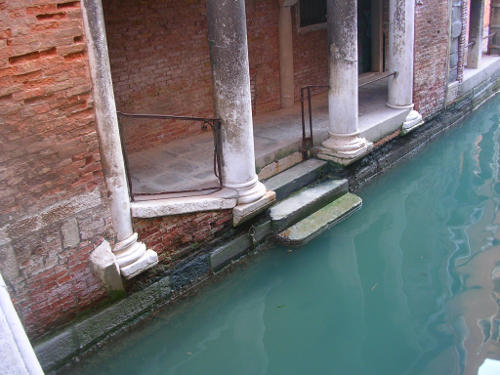 Since we have returned to live in Italy back in 2000, my British husband and I have been trying to get in contact with English speaking people living in Venice for a long time.

Veneto is not Tuscany, we don’t have all the lovely rolling hills full of sunflowers and olive trees and there aren’t all that many old countryside houses ready to be snatched by foreign people.

Veneto is a very urbanised region (apart from the mountain part), therefore people who move here generally, do that either for work or because they have married a Venetian person.

So we found it very difficult to get in touch with other fellow British or Americans (hey, even Australians would have done!).

A part for a couple of people here and there, we could not find a real group of people who would just love to meet once in a while for a meal and a chat.

Maybe we were unlucky, maybe it was not the right time. Who knows?

Anyway a couple of weeks ago we got asked on Facebook to join a group of ex-pats living in Venice, We took ” la palla al balzo”  (meaning we did not let the opportunity pass us by) and immediately joined the group.

Soon after Victoria, the creator of the group, a young British girl who lives in Venice with her Venetian boyfriend, organised the first meet-up for the group.

So, last night, finally, we got all together and it turned out we really had a great time.

We first met for a drink in Campo Santa Margherita, the buzzing square in Venice where all young people usually meet for a drink. We were in ten, from all different parts of Britain, USA and Italy.

There was Tami (my dear friend from Indiana) with her Venetian husband Davide who owns an amazing fresh cheese and cold meats shop in Venice, just 1 minute from Rialto; there was Tracey from Colorado, who just got married (only couple of weeks ago) to her lovely Venetian husband Emanuele; there was Laura, from Britain, who has lived in Venice for few years now; there was Letha, who is researching about Tintoretto and who is going to live here for a while; there was Victoria, who is an English teacher together with her Venetian boyfriend Emanuele and finally there were my husband Chris and I. 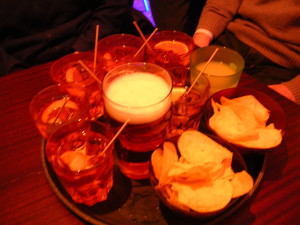 We went in a bar in Campo Santa Margherita and tried a nice spritz (nothing else would do when you are in Venice just before diner!).

The conversation flowed (despite the loud music and the crowds) and we all started to get to know each other. Lots of funny jokes about life in Italy and embarrassing experiences were discussed, but we all managed not to complain too much about living in Italy! And that felt good.

After the aperitif we decided to take the evening to a very nice restaurant near Piazzale Roma called La Rosa dei Venti (Fondamenta Minotto), a place where many local Venetians go to. 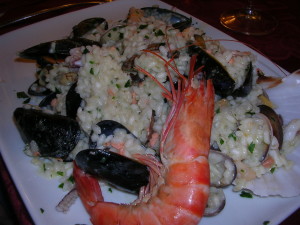 Here we had a lovely meal of fresh fish starters, fish pasta and seafood risotto, fried fish with chips and polenta and some lovely Tiramisu! The waiter made us feel very welcome and offered us also some nice Prosecco wine. 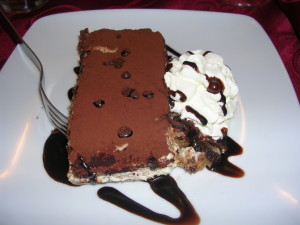 What I really loved about this evening was the chance to mix with people who are in the same situation as Chris and I are: that is a mixed culture relationship and also living in a foreign country (talking about hubby, obviously, not me).

Don’t get me wrong. I really think when you move to a new country you have to make the effort to try to accept the customs and the way of living as much as you can, but this does not mean that you cannot see or pretend not to see the other side of the medal. I mean, in any country there are good and bad things, not talking about it in my opinion is wrong.

Last night everybody was more or less in the same situation and it was nice to talk about anything and getting the feeling that everyone at the table knew exactly how you felt and what you meant, without having to spend all night explaining what you were saying or defending your point of view, only because it is different from the national point of view (this happens in any country you live in, if you are a foreigner!)

I hope everyone else got the same feeling and I sincerely hope this group will carry one meeting and more people will join us.

There is nothing better than putting people from different countries and walks of lives in front of a nice table full of food to get a lovely conversation going, where everyone at the end of the meal feels like to have gained not only a few pounds from the lovely dishes he has eaten, but also to have learned a lot from the people with whom the food and the ideas were shared. 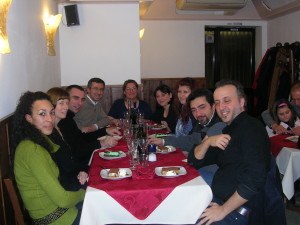 So Victoria, get a move on and organise another lovely meet-up like yesterday’s!

PS: if you are living in Venice or Veneto region and would like to join our group, feel free to do so on Facebook.

T FONDACO DEI TEDESCHI – ONE YEAR ON IN VENICE