In the month of October I attended, as brand ambassador, TuttoFood Milano, a fair dedicated to Food and Wine at Fiera di Milano in Milan.

As part of the event, Tuttofood organized for us to visit the world famous Opera House Teatro Alla Scala. 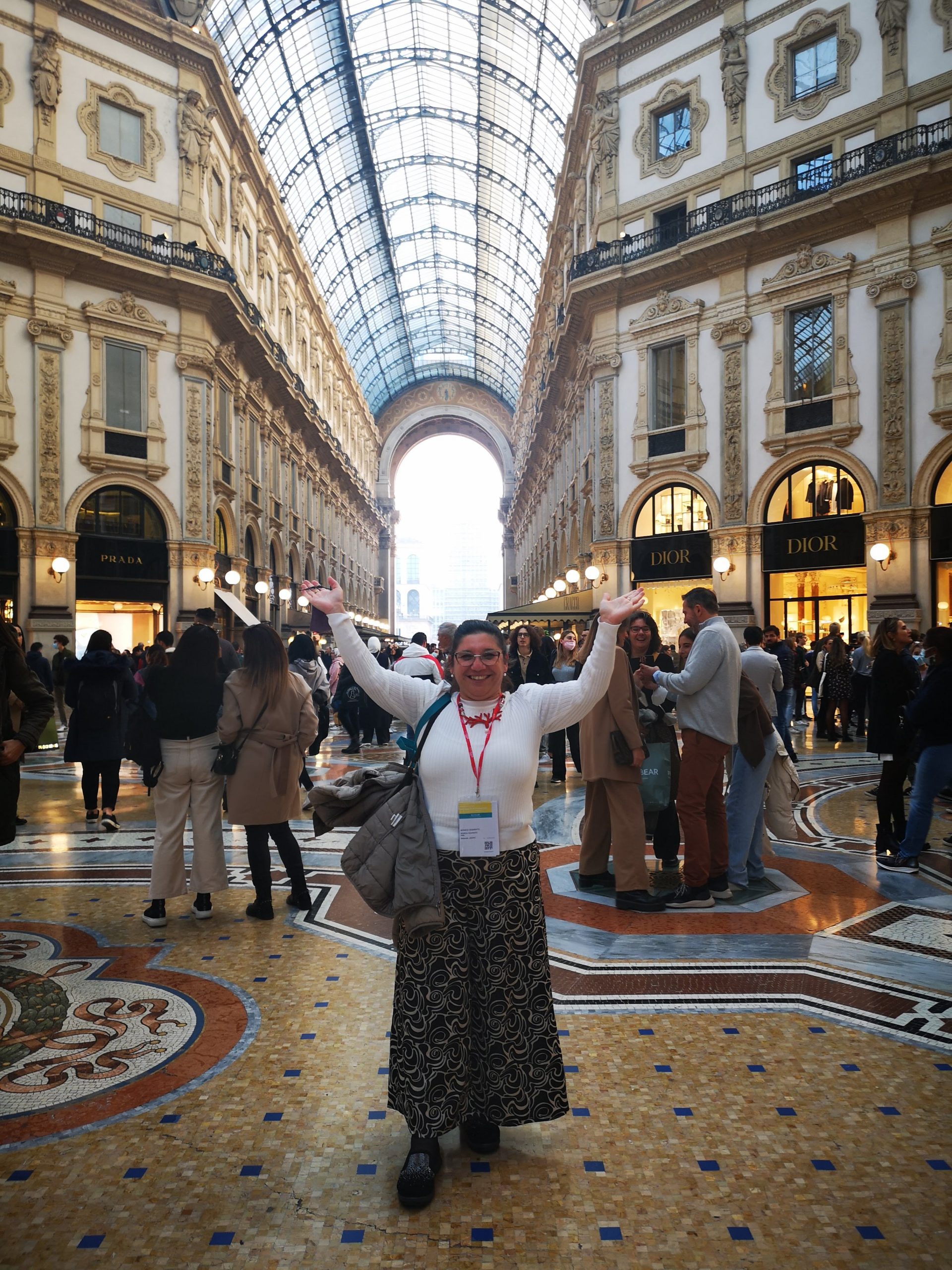 A theatre is a place of enchantment and reflection, art and sharing. A vehicle of sensitivity and culture, theatre is the form of expression that has been able to create new forms of art and bring the common citizen closer to beauty, as well as create social awareness. In Milan, the theatrical tradition is resistant and above all varied: diversity in the Milanese capital is an inexhaustible resource even, in theatre. 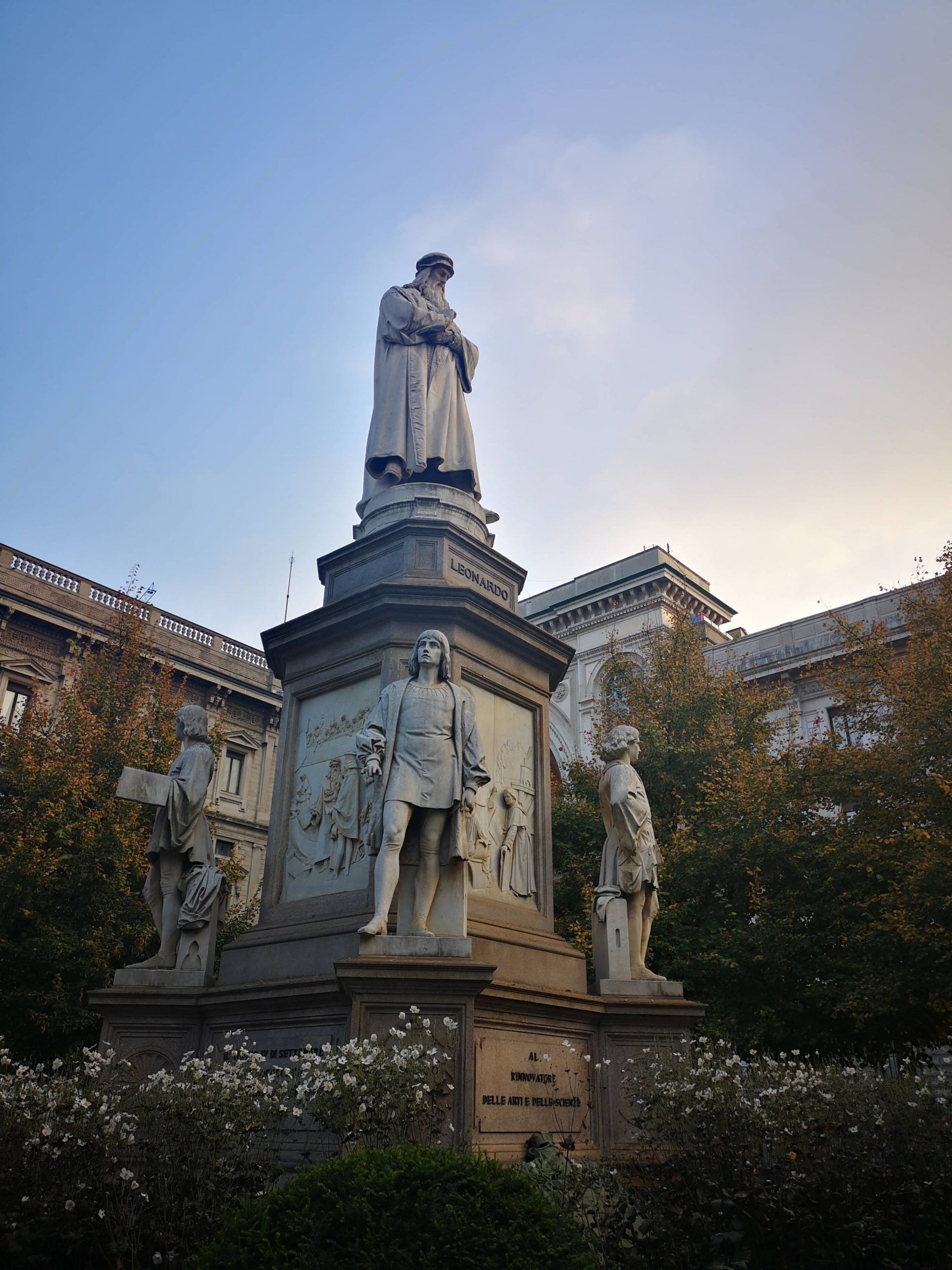 La Scala Opera House is the queen of Milanese theatres, the beating heart of opera and ballet: a place of art and elegance, a lung for cultural promotion and initiatives that attract young and old. 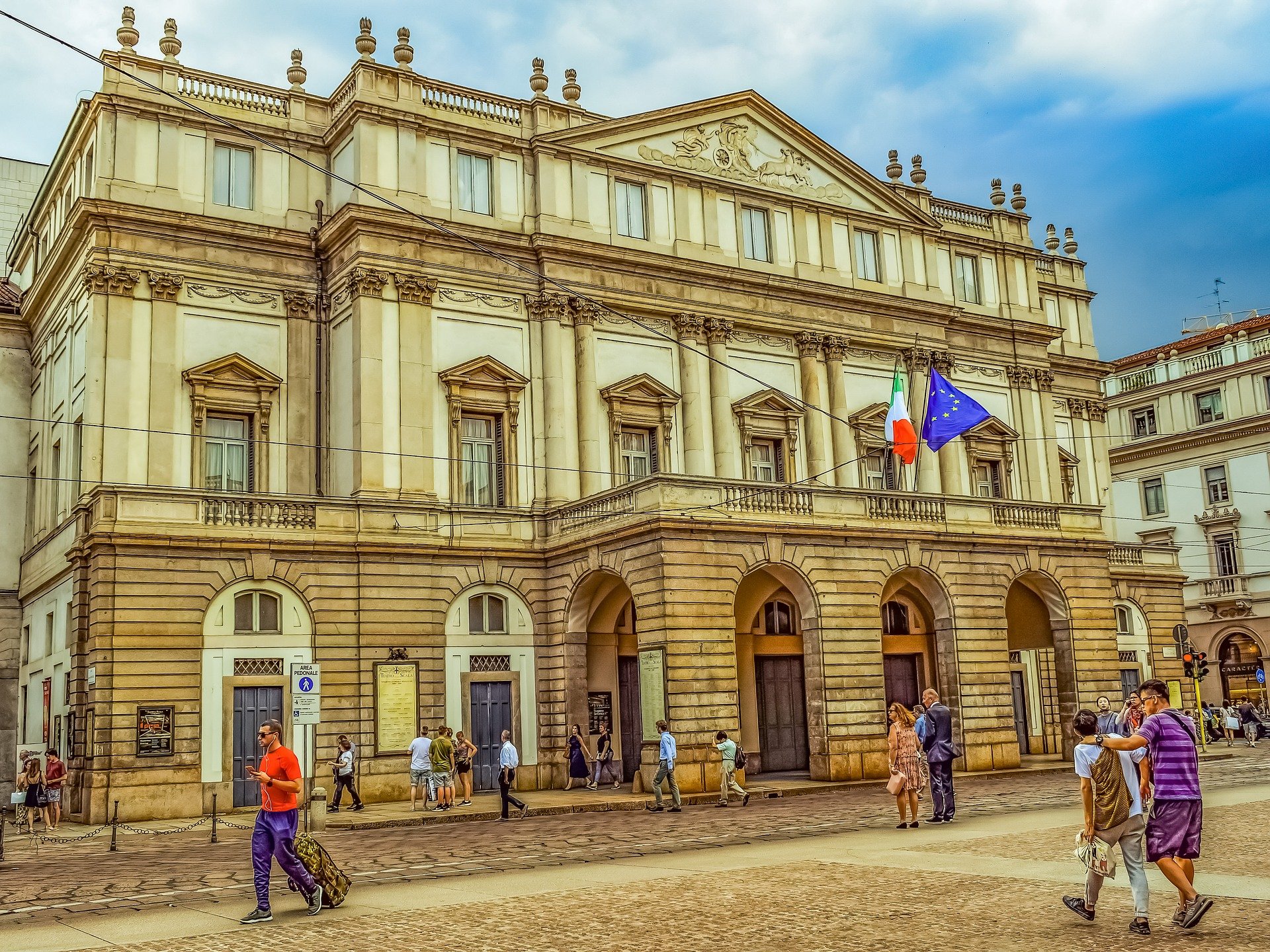 Image by Dimitris Vetsikas from Pixabay

On a still warm October afternoon, we were taken for a private tour of the theatre and the museum: a 90 minutes  guided tour with an art history professional who accompanied us to discover this historical-artistic wonder located in the heart of Milan, halfway from the crowded and touristic Piazza Duomo and the city’s luxury shopping street, Via Montenapoleone. 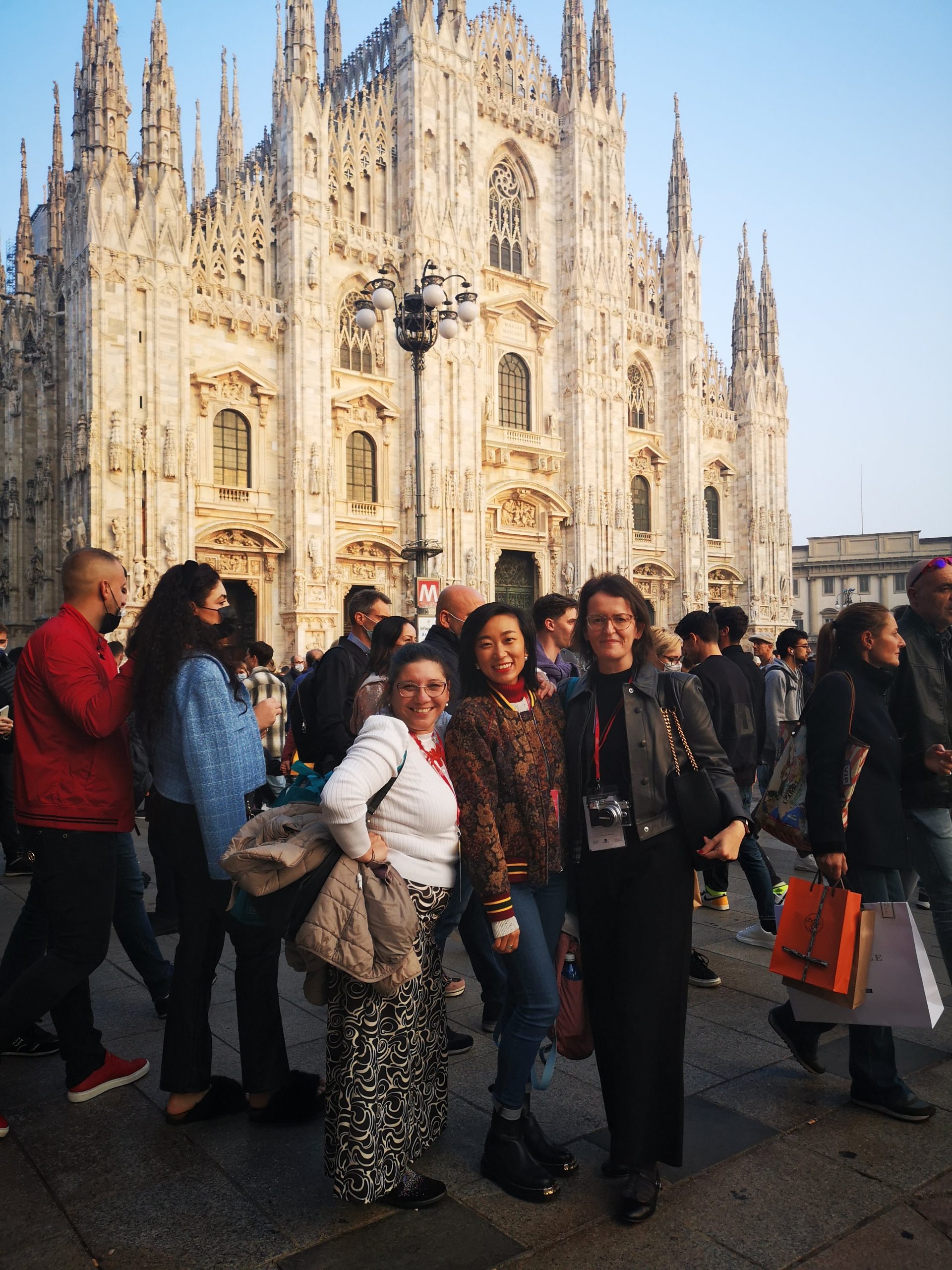 TuttoFood Brand Ambassadors : me, Cina In Tavola and Mis Macaron

As soon as I entered I found myself in front of a very large and bright living room, rich in details and full of pomp, artificial it is true, but still with an unmistakable charm. 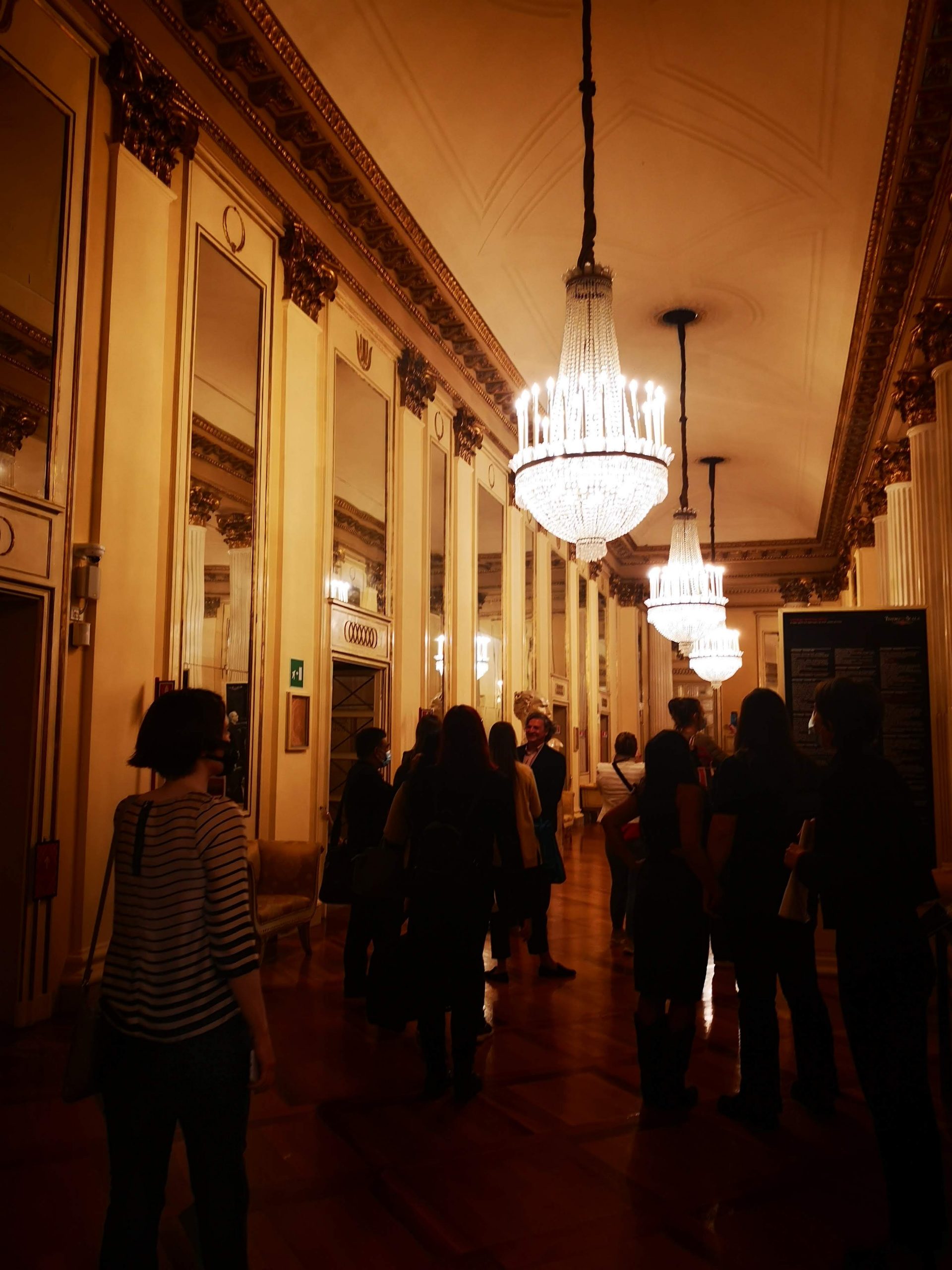 In the first decades from its birth, the function of the theatre was not only to host the shows, but above all a meeting place for the families who had commissioned its construction, who maintained its dominion through the ownership of the boxes inside. And the stages were aimed at meetings between families, eating, discussing social life, gambling. 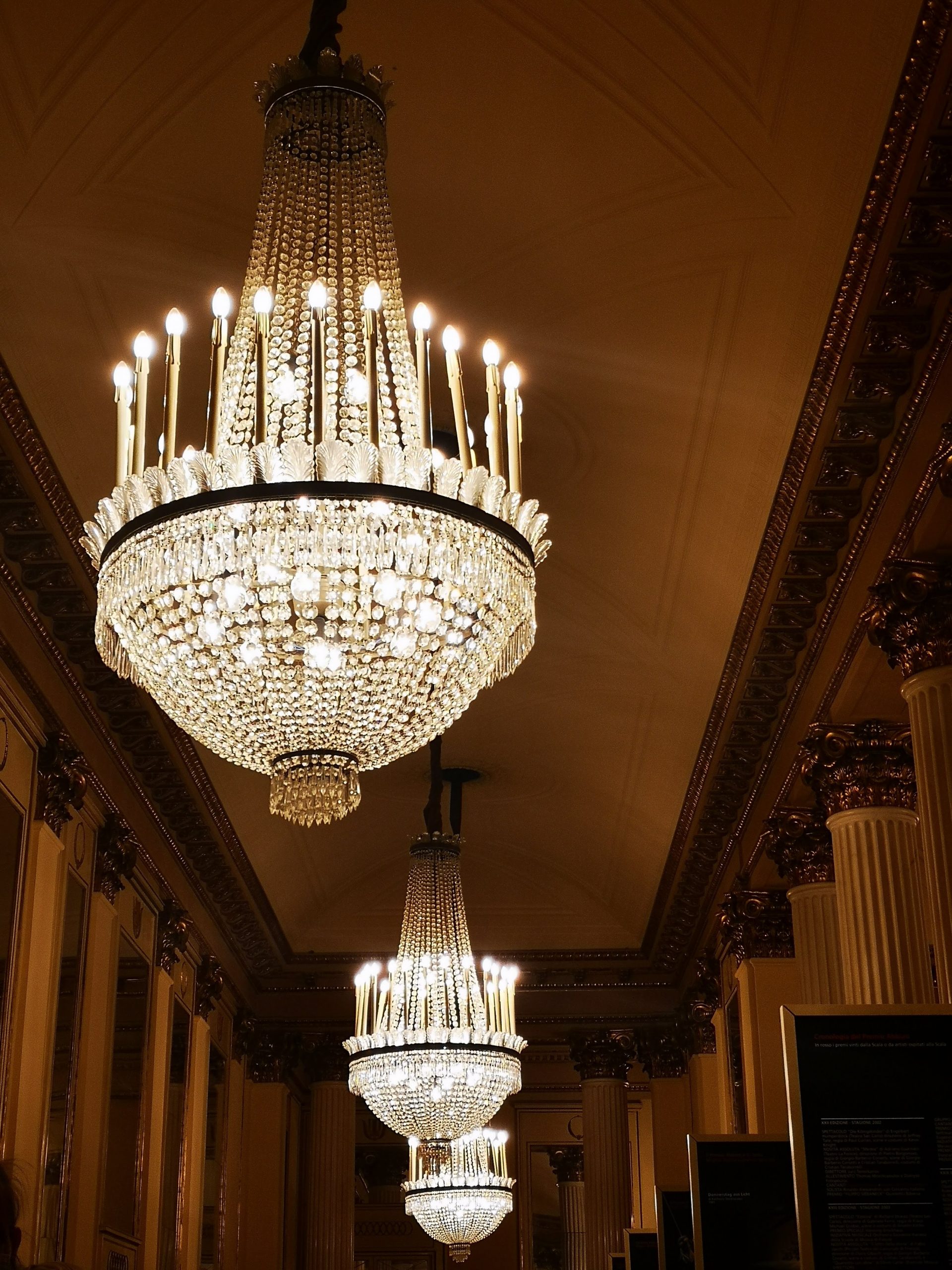 Teatro Alla Scala in Milan is one of the most famous theatres in the world and is known as the world temple of opera. 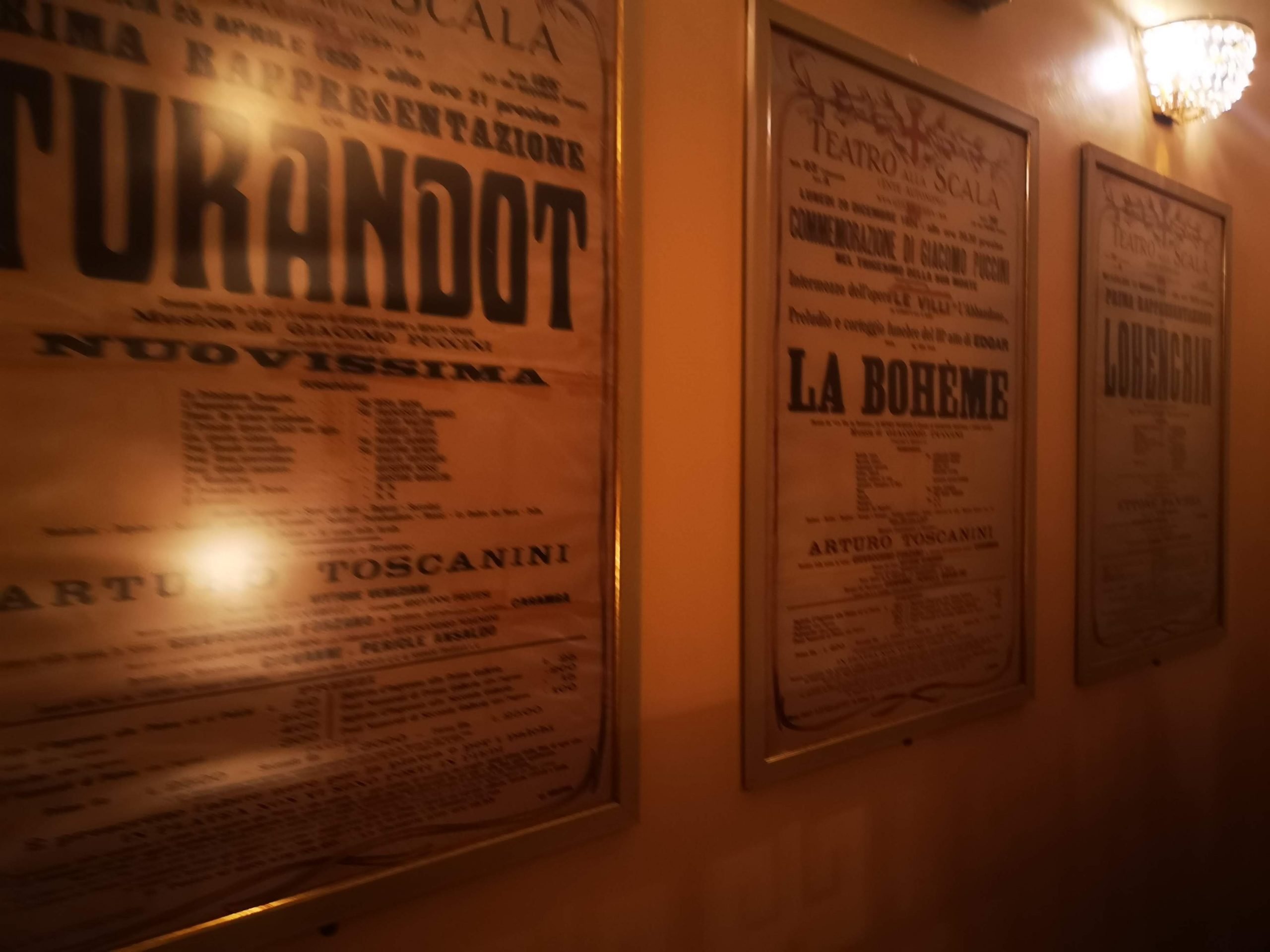 Its inauguration dates back to 3rd August 1778 and its name comes from the square where it was built, the Piazza della Scala. This, in turn, is so called due to the church of Santa Maria alla Scala that stood there from 1381. The church took the name of its patron, Beatrice Regina della Scala, descendant of the powerful Veronese dynasty, now extinct, of the “Della Scala”, a family that was also known as the “Scala family”. 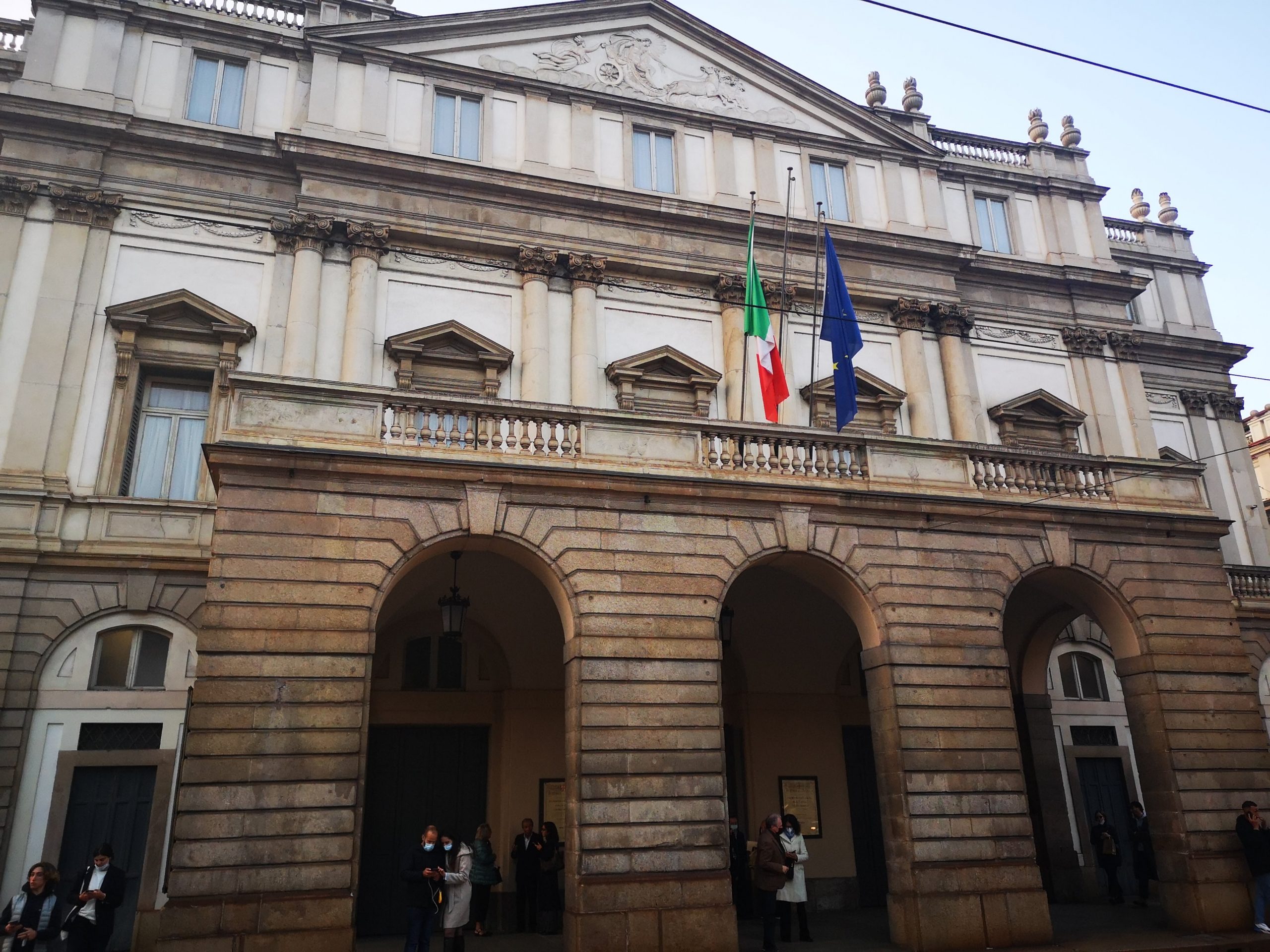 Beatrice Regina della Scala married, in 1345, at the age of 12, Bernabò Visconti, lord of Milan, and gave him fifteen children. When in 1776 Maria Theresa of Austria ordered the construction of the theatre, the pre-existing church, in Gothic style, was demolished to make way for the new temple of opera. 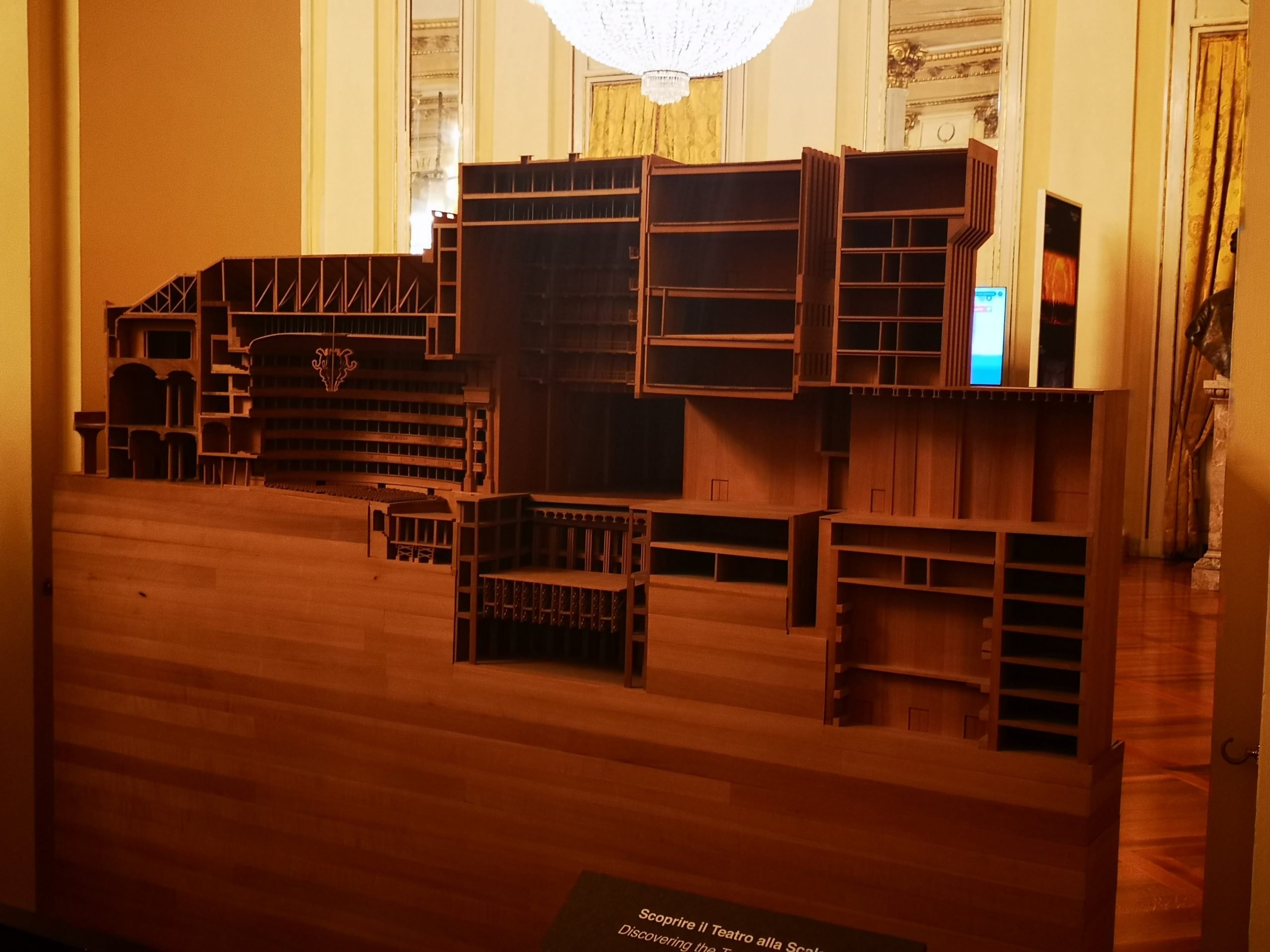 Alla Scala Opera House in Milan was built in just two years (1776-1778) on a project by the Italian architect Giuseppe Piermarini. It was meant to be the largest theatre ever built and the Vienna Opera itself was later built on its example. 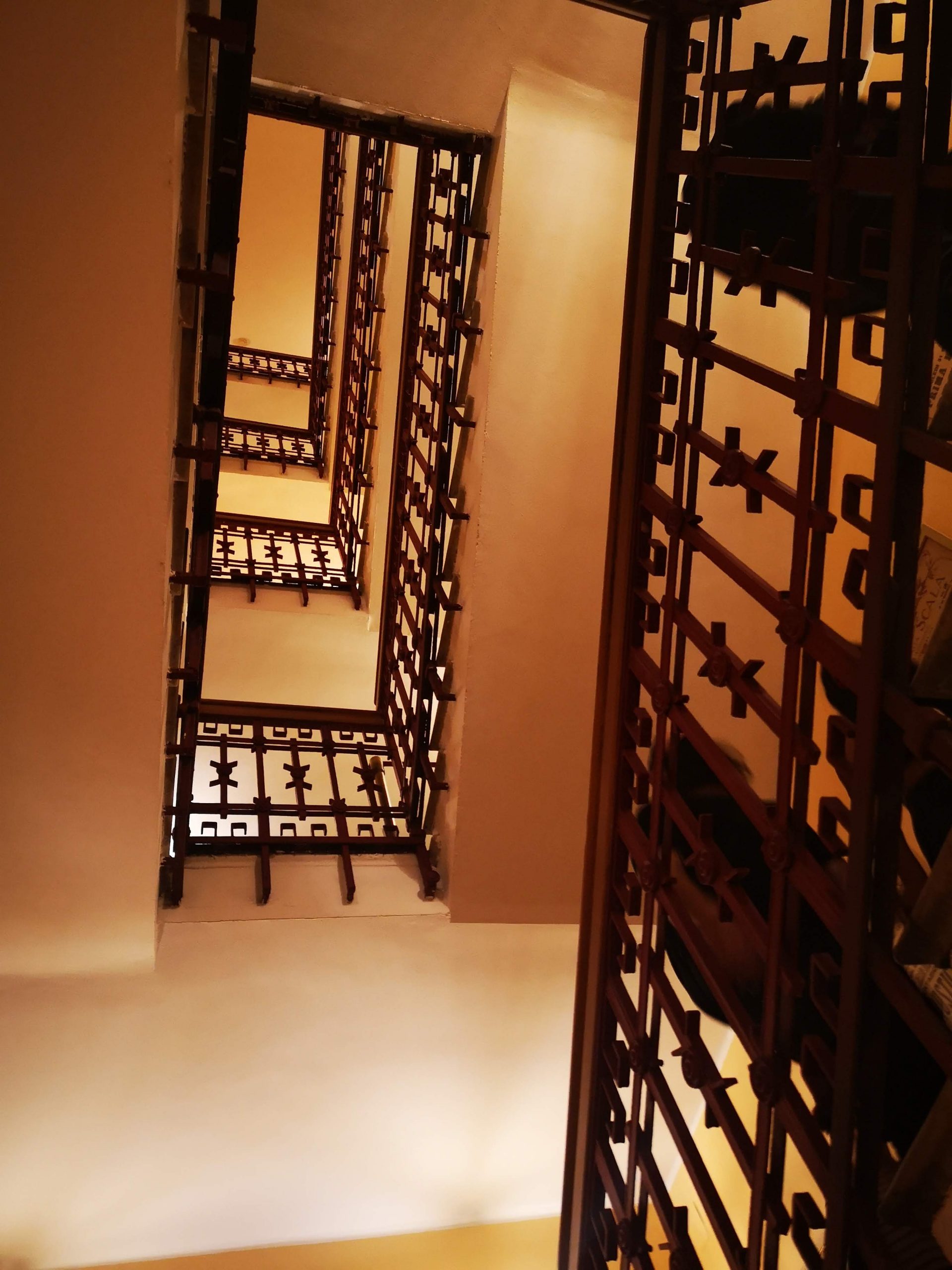 Until February 1776, the Milanese theatre was the Regio Ducale, which was located more or less where today the Royal Palace is. When it was destroyed, Empress Maria Theresa of Austria decided to have a new one built and so Teatro alla Scala was born from the ashes of the Royal Theatre of Villa Reale.

The theatre was inaugurated on 3rd August 1778 with an opera by Antonio Salieri, “Europe recognized”, in the presence of Archduke Ferdinand of Habsburg I.

The night of Boxing Day 1883, Edison, for the first time in history, lit Teatro alla Scala with electricity. 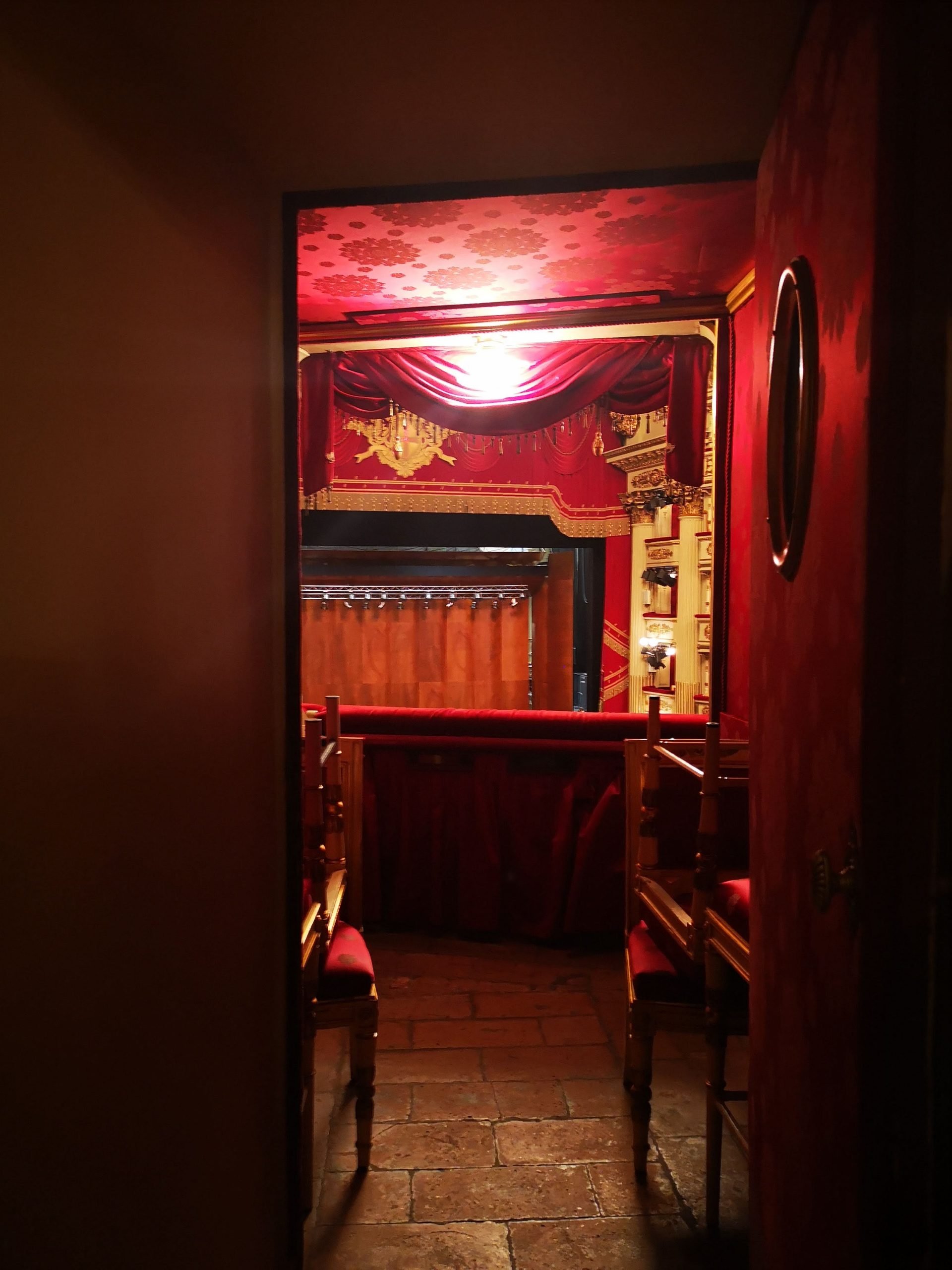 During World War II, between 15th and 16th August 1943, the Scala was subjected to heavy bombings: the theatre suffered serious damage to the ceiling and walls, caused by the fall of the roof. 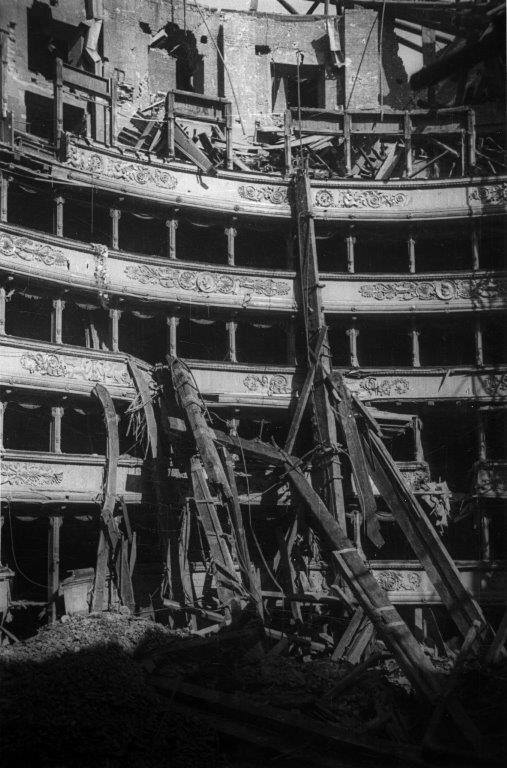 At the end of the war, on the initiative of the then Mayor Antonio Greppi, the building was quickly rebuilt as it used to be before the conflict and reopened on 11th May 1946, with a memorable concert directed by Maestro Arturo Toscanini.

After the war, La Scala experienced a magical season. The management of Superintendent Antonio Ghiringhelli was marked, among other things, by disputes between Callas and Tebaldi fans: those who went to the Galleria at that time found groups of Milanese people who were discussing, animatedly, about opera. 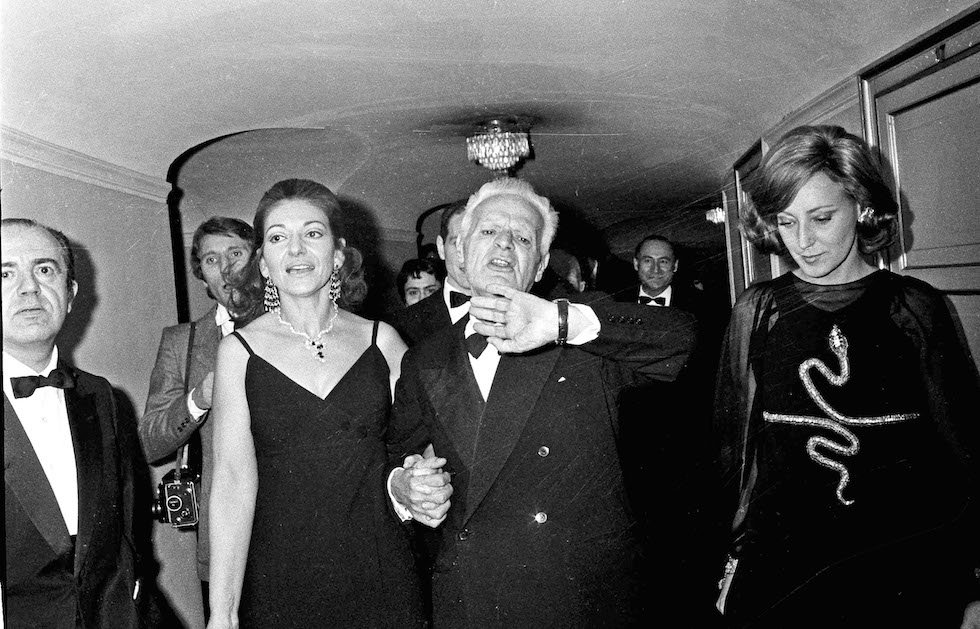 The singer Maria Callas and Antonio Ghirinighelli, Superintendent of Alla Scala, at the premiere on December 7, 1970
(AP Photo/Armando Trovati)

The management of Paolo Grassi, in the seventies of the last century, marked the period of greatest productivity for the theatre, which put on almost three hundred performances a year.

Today La Scala has returned to produce around two hundred and eighty four shows a year.

Marie-Henri Beyle Stendhal gasped standing in front of it and wrote:

«to the most beautiful theatre in the world, the one that gives the greatest musical enjoyment. It is impossible to imagine anything greater, more solemn and new».

Like the French writer, today we too are led to consider the Scala immutable over time. But things are not quite like that. The Milan theatre has changed its skin several times, like a giant of culture adapting to different eras, giving in to frivolities sometimes too. 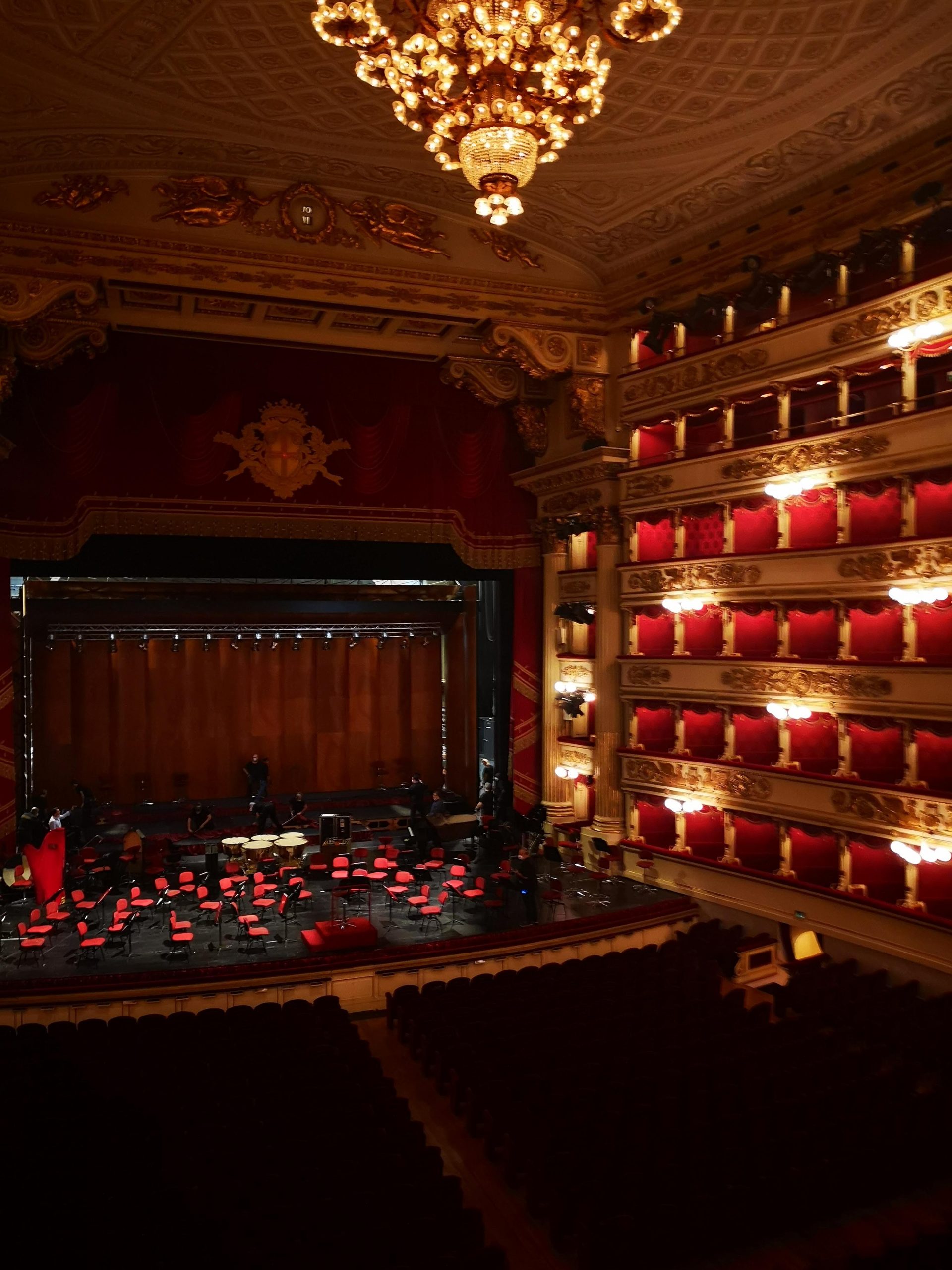 If we walked in it between 1778 and 1786, we would have even found Milanese people gambling away. Even when the shows were held, involving famous sopranos and castrated altos, people played in the boxes and in the rear parts, amidst the harsh smoke of cigars and some swearing, all favoured by good amount of alcohol.

The boxes had owners and tenants who acted as they pleased: they could choose furniture and ornaments and everyone and had to provide for their own heating and oil lighting.

There were also shops and a crowded restaurant. On stage and in the stalls, social gatherings, dances and light shows were held. Loud parties could also be held. In short, it was an open city centre, even if it was almost exclusively intended for the aristocracy and the bourgeoisie.

In the nineteenth century the nobles entered the theatre around six in the afternoon (even if the show began at midnight) and, since there were small kitchens behind the boxes, the servants prepared dinner. The carriages stopped under the portico, so as not to get the ladies’ shoes dirty or wet. The stalls were used as a ballroom and the floor was raised to have more space. Before the show began, the nobles went up to the boxes and the servants, with the soldiers, took chairs and benches from the wardrobe and placed them in the central space of the stalls.

If the show involved a naval battle, it was completely filled with water. On some occasions, the theatre also hosted knightly or equestrian tournaments, such as the one organized in 1864 and pompously titled Gran Torneo Italia e Savoia. For the nobles, the theatre was a sort of “second home”, so everyone furnished his box as he pleased and spent time there with his friends. Before the 1900s, musicians and conductor did not have a seat assigned to them, but played in front of the public, who could not enjoy the show to the fullest. 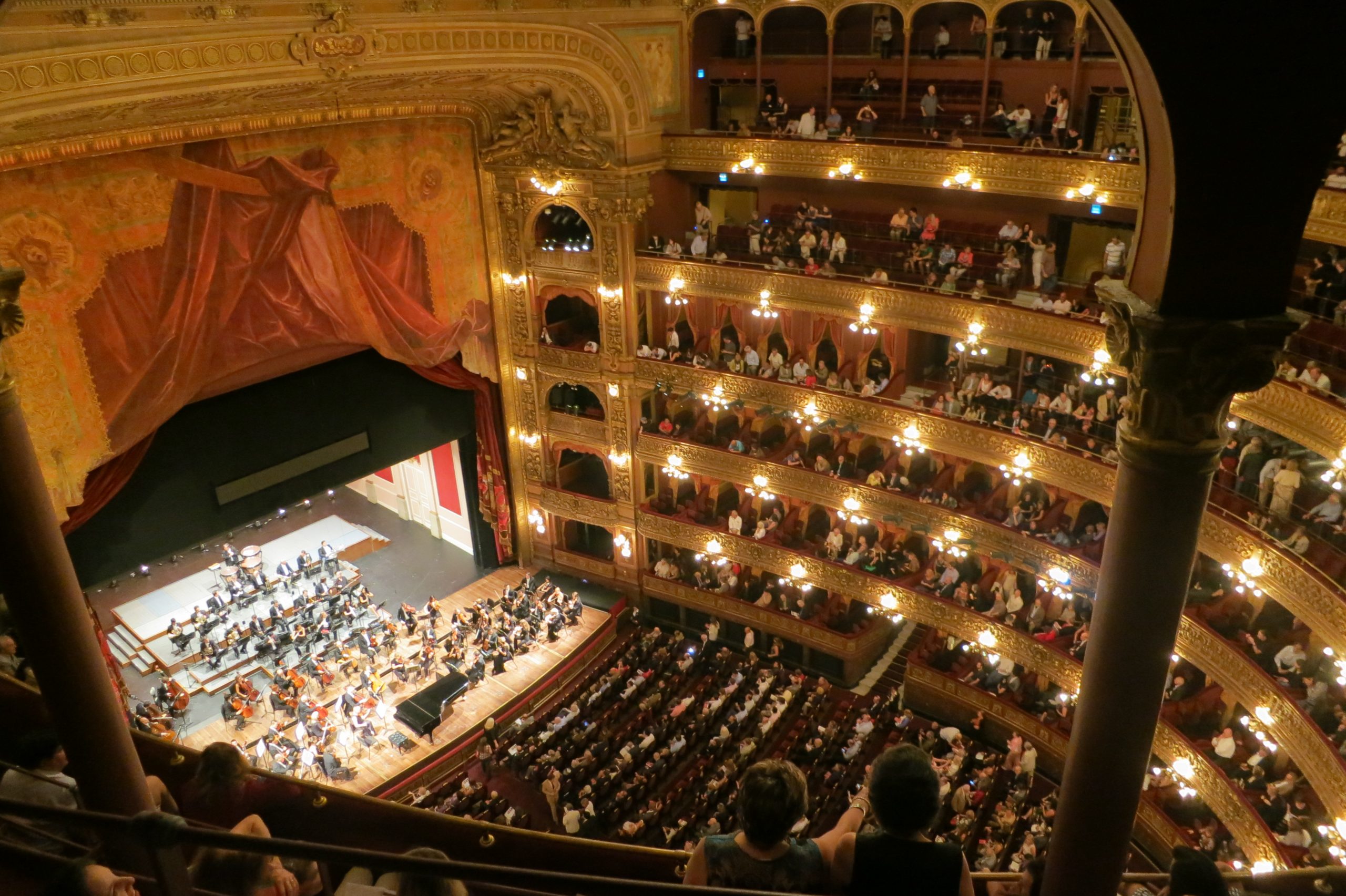 Electricity arrived in the theatre on in 1883. Until then, candles were used, placed in a central lamp positioned in the limelight. The light reflected off metal shields, which multiplied it, with an obvious high risk of fire. Subsequently, oil lamps were used, which were lit at the entrance to the spectator room. The magnificent, huge chandelier that can be admired today (equipped with 365 lamps) was made in 1860 in blown crystal by Venetian artisans, based on a design by the scenographer Alessandro Sanquirico.

Some of the world major conductors took turns on the podium, the likes of Arturo Toscanini, Herbert von Karajan, Zubin Mehta, Claudio Abbado, and Riccardo Muti. 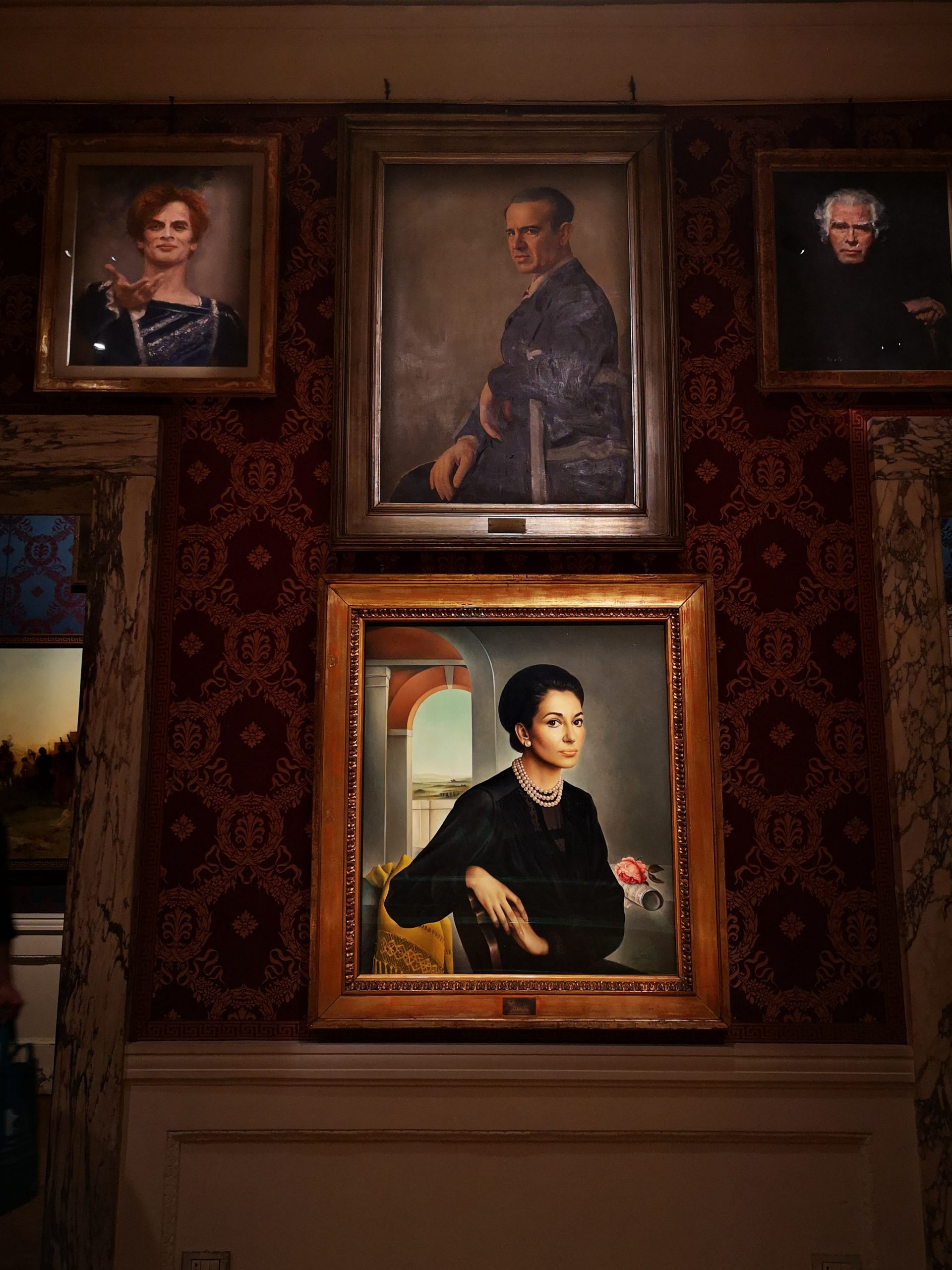 La Scala was inspired by Luigi Vanvitelli’s Royal Palace of Caserta, but immediately became a model for the Teatro all’Italiana, which inspired many other prestigious theatres, including La Fenice in Venice and the San Carlo Theatre in Naples.

Not too flashy from the outside (the facade was designed to overlook a street and not a square), its interior was originally very different from how we can admire it now: it has been the subject of various interventions, including those of the architect Luigi Canonica and the set designer and architect Alessandro Sanquirico.

Currently the appearance is in neoclassical style, with parapet of galleries and boxes in ivory and gold decorations. 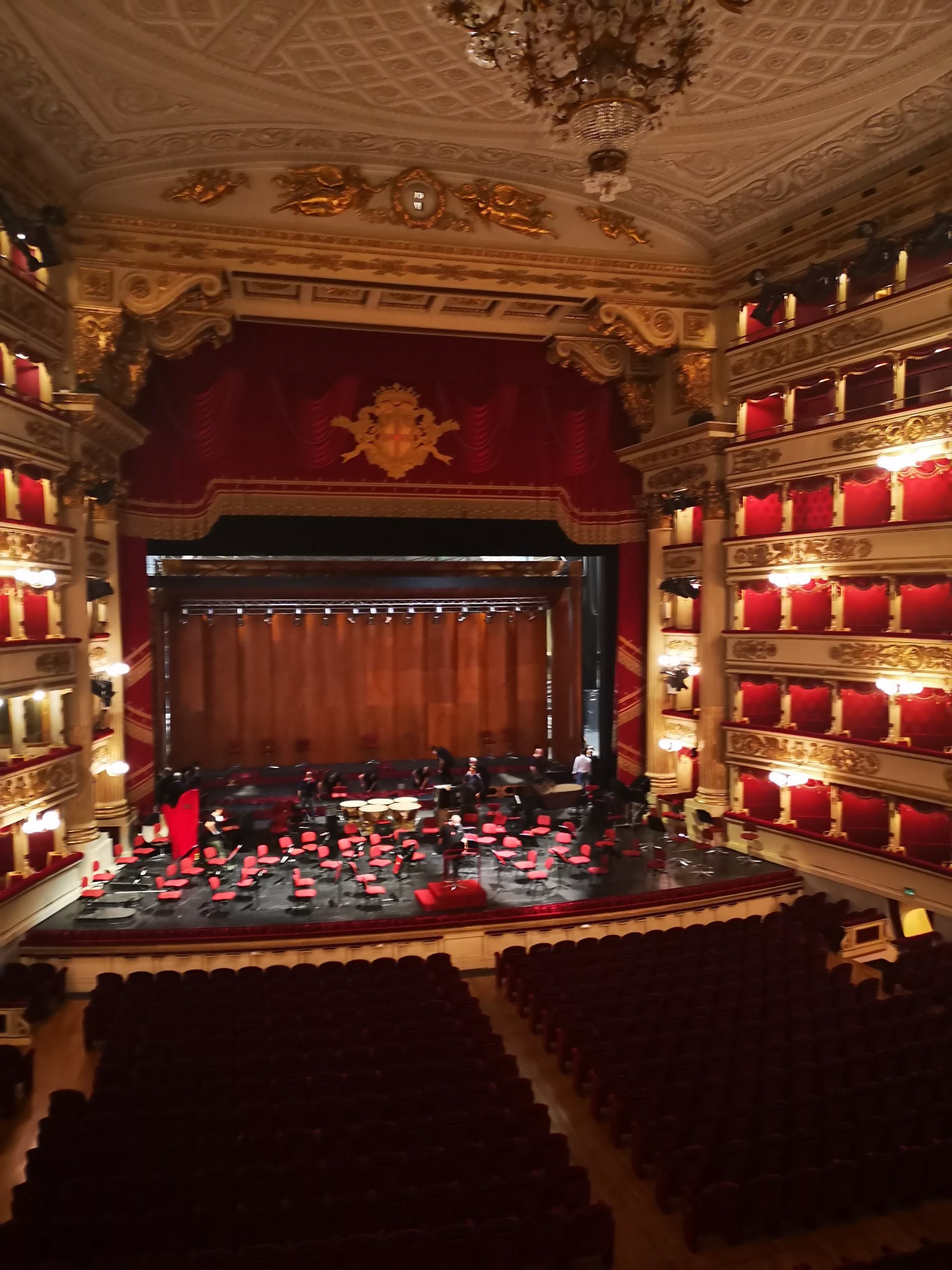 The columns that separate one stage from the other are set back, so as to improve the view. Initially, the individual boxes were decorated according to the taste of the owners: coloured upholstery, furniture, mirrors and chairs of their choice.

Now, with the exception of a stage (which survived the bombing of 1943) that is kept with original furnishings and decorations, the walls are all in red damask.

After the renovation, in order to improve the acoustics, the stalls were paved with wooden parquet, arranged in special layers. The installation of the new parquet proved to be complex and delicate: the Maestro Riccardo Muti, at the time Musical Director of La Scala, aware of the importance of this passage for the best performance of operas and concerts, oversaw the execution of the works, until he judged the final result exceptional. 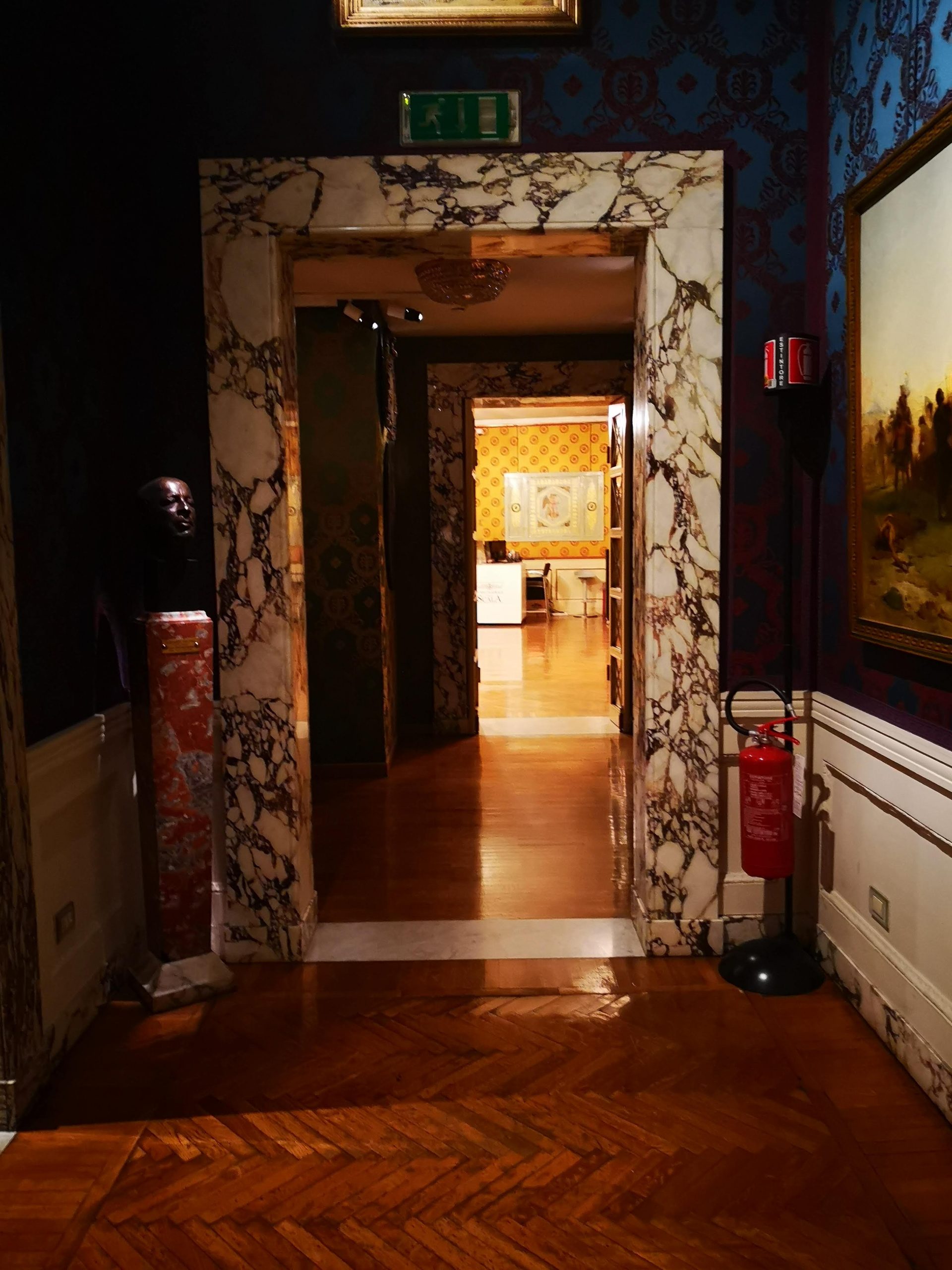 Terracotta was placed in the boxes. Before the renovation and conservative restoration of 2002-2004, the effect was of a more luxurious environment: now, in addition to the aesthetics, the acoustics are also somewhat improved.

The floor plan of the stalls is in the shape of a horseshoe; there are four tiers of boxes (one hundred and fifty-six in total), two galleries. 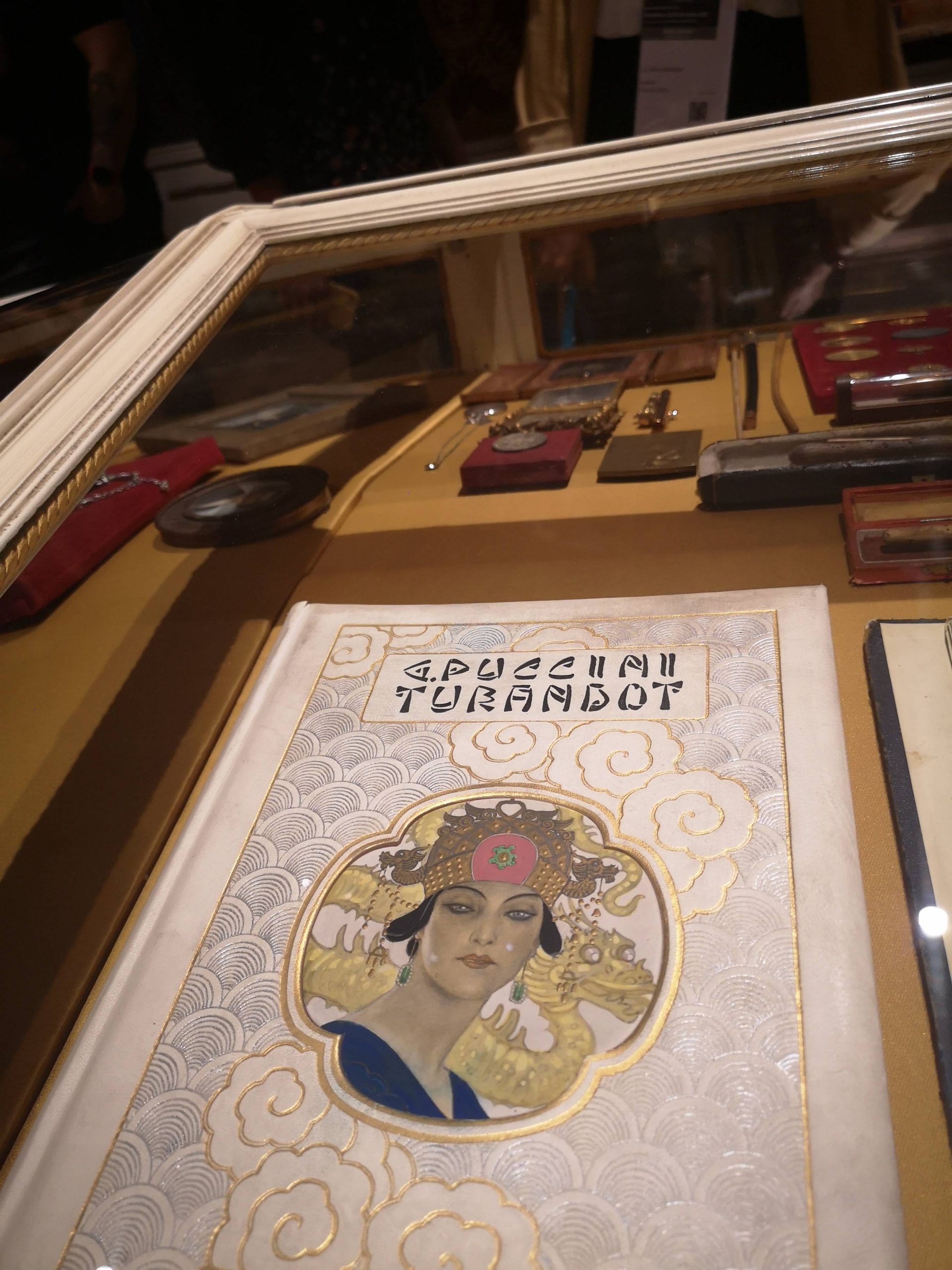 Opposite the stage is the Royal Box, once reserved for members of the Habsburg family, for the Archdukes of Milan, then for the Savoy and their guests, now reserved for the Authorities.

The Royal Box occupies, in height, the equivalent of two tiers of boxes and has hosted, even in recent years, the Presidents of the Republic Carlo Azeglio Ciampi and Giorgio Napolitano, Heads of State and Prime Ministers, Emirs, Kings and Queens. 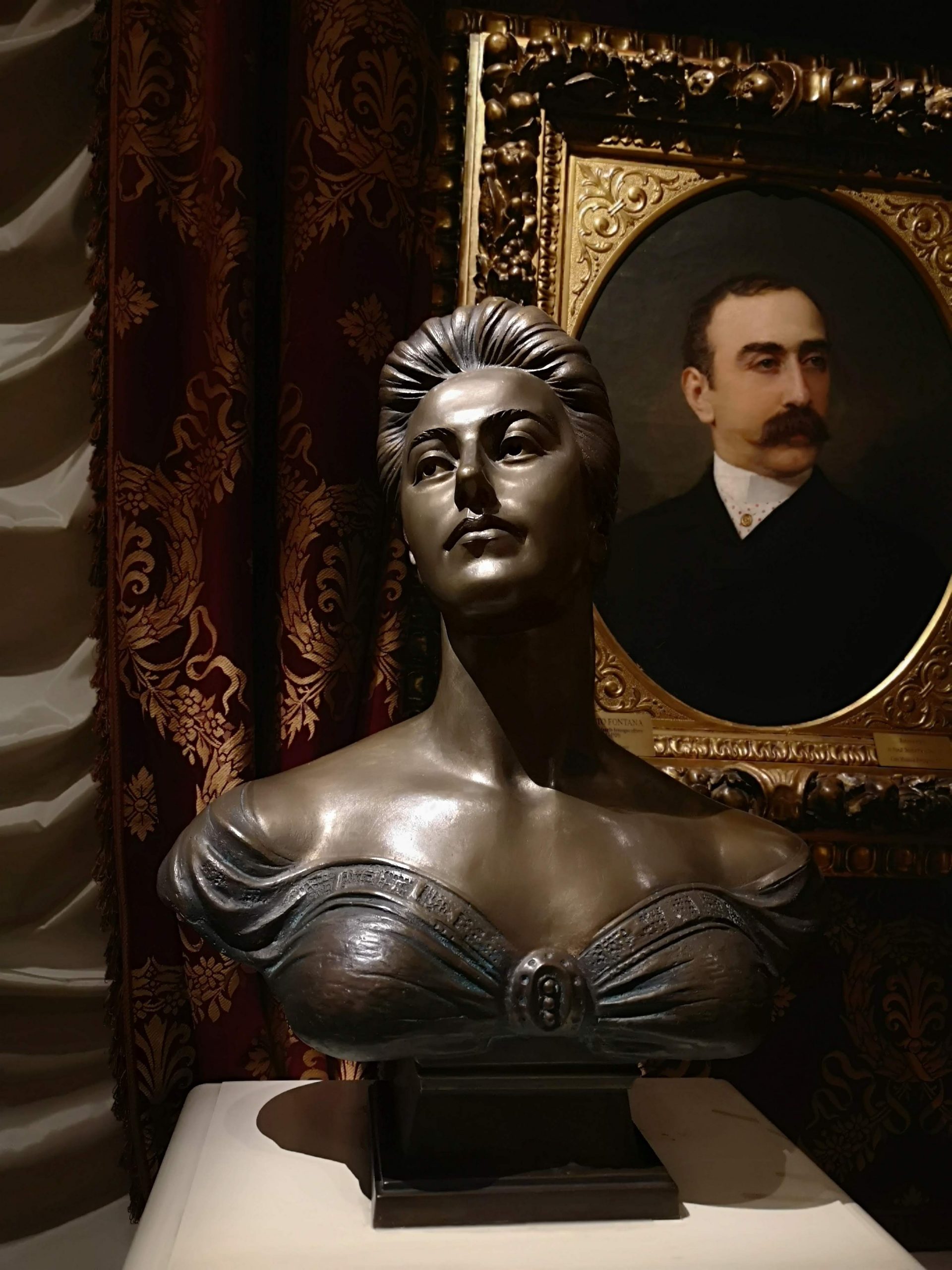 The curtain is in red velvet with an “imperial” opening, with a neoclassical style gold decoration. In the upper part of the curtain is placed the emblem of the Municipality of Milan, surmounted from a luminous clock. Between 2002 and 2004, the radical renovation of the theatre allowed the construction of an imposing scenic tower and an oval-shaped structure designed by the architect Mario Botta. 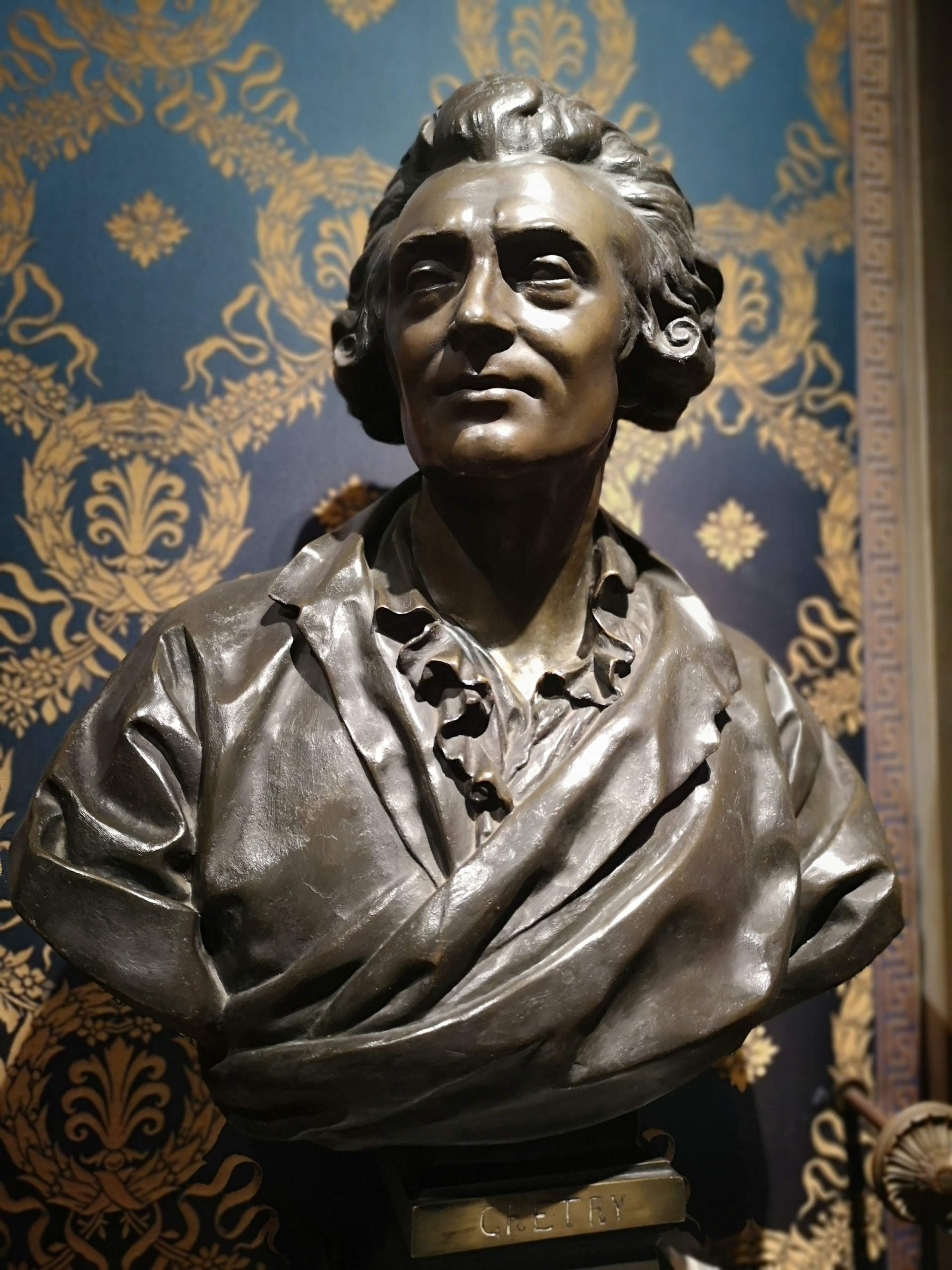 The theatre also houses a museum that summarizes its history through relics, opera and ballet posters, portraits, busts, ancient and rare musical instruments and a library which also contains volumes relating to the events of the theatre. 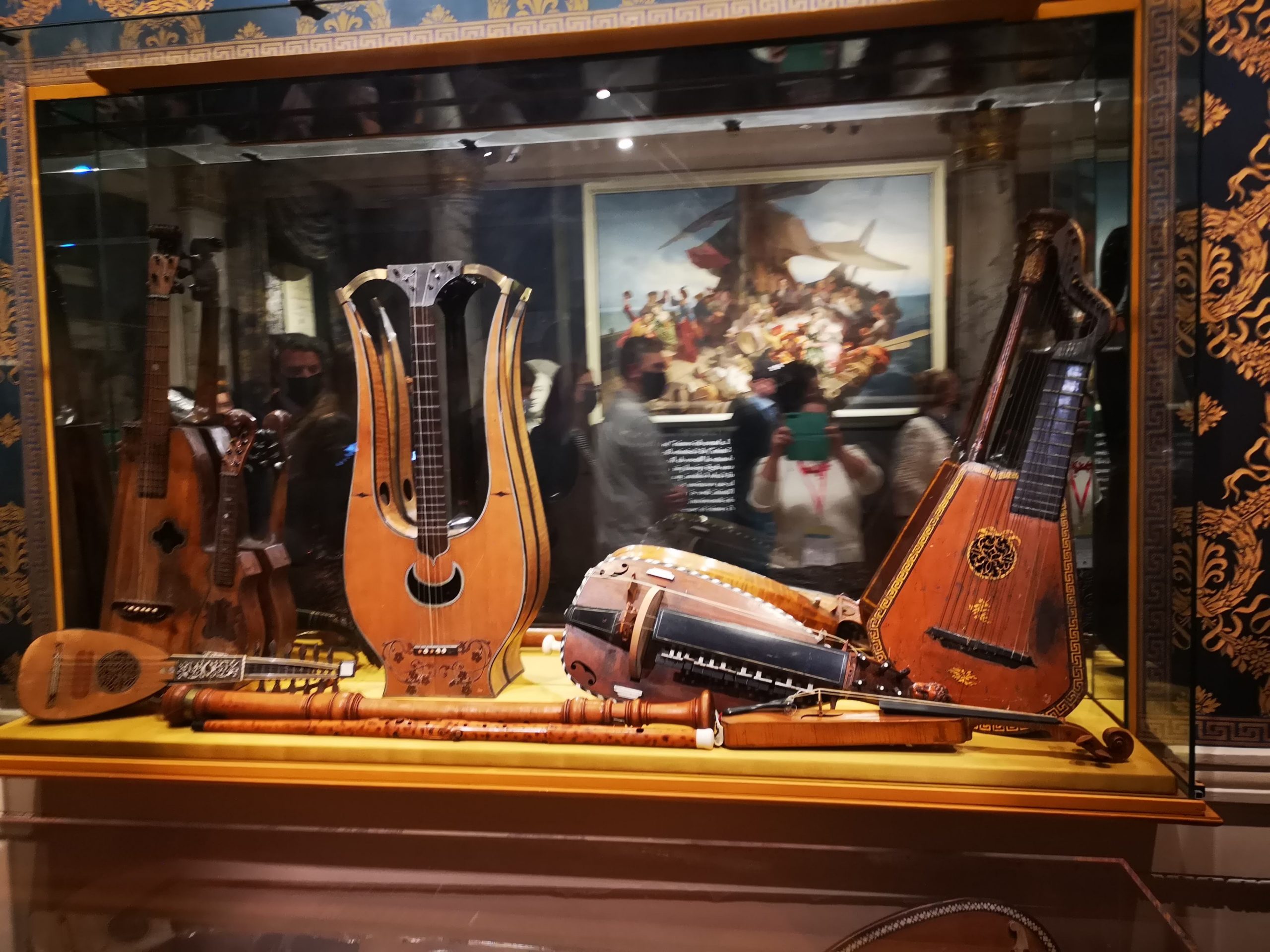 And even inside the museum the sumptuousness is not lacking: walls covered with the same cloth drapes with relief figures used for the window curtains, each room with a different colour, and the paintings hung on the walls with chromatically identical cords to those tied around the drapery of the curtains. An artificial scenographic effect but totally enveloping. 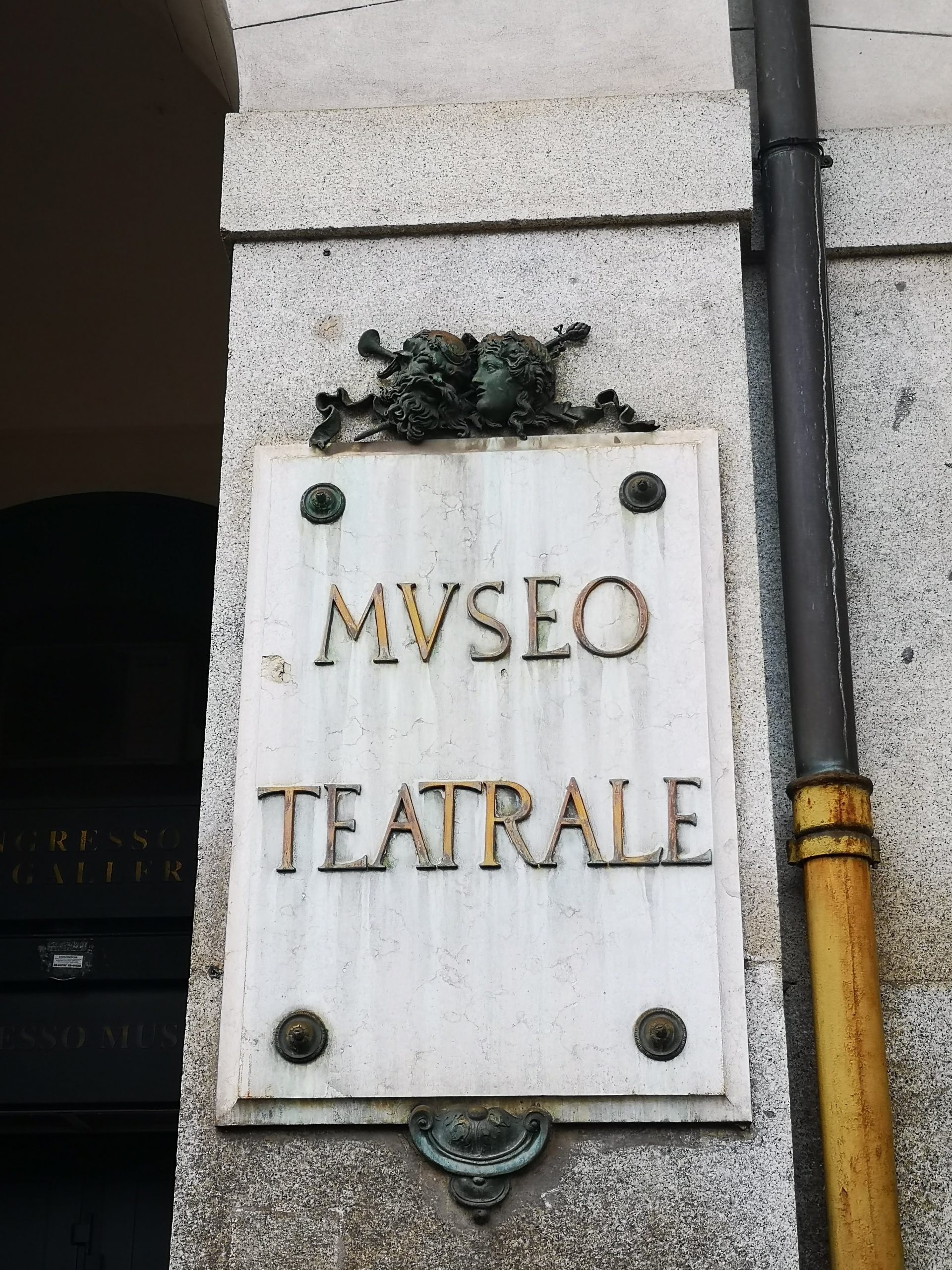 I can honestly say this has been one of the most interesting and exciting things I got to do in my entire life.

T FONDACO DEI TEDESCHI – ONE YEAR ON IN VENICE