Polenta and I: a life-long love affair!

The first memory of the taste of polenta in my mouth goes back to the age 3 or 4.

I was sitting on the back of my mum sit-up-&-beg bike (this is the nice term British people call the Graziella bikes, which used to be in fashion in Italy in the 70s – any Italian out there knows what I am talking about) and I was holding a piece of bread with Nutella in one hand and a big piece of cold polenta in the other.

I remember my mother shaking her head at this scene, which used to take place every afternoon, after we went to visit my grand-mother, coming out of nursery school.

My mother used to ride for about 2-3 km with me sitting at the back of her bike, just staring with a side look over my Nutella and my polenta.

My grand-mother used to make polenta everyday (proper polenta, not the ready-made one you can find in all supermarkets now) and believe me, nothing tasted better (and still does!).

I love bread, cannot stand the thought of it not been part of my daily intake of food, but polenta holds a dear place in my heart, I can have it with almost anything. 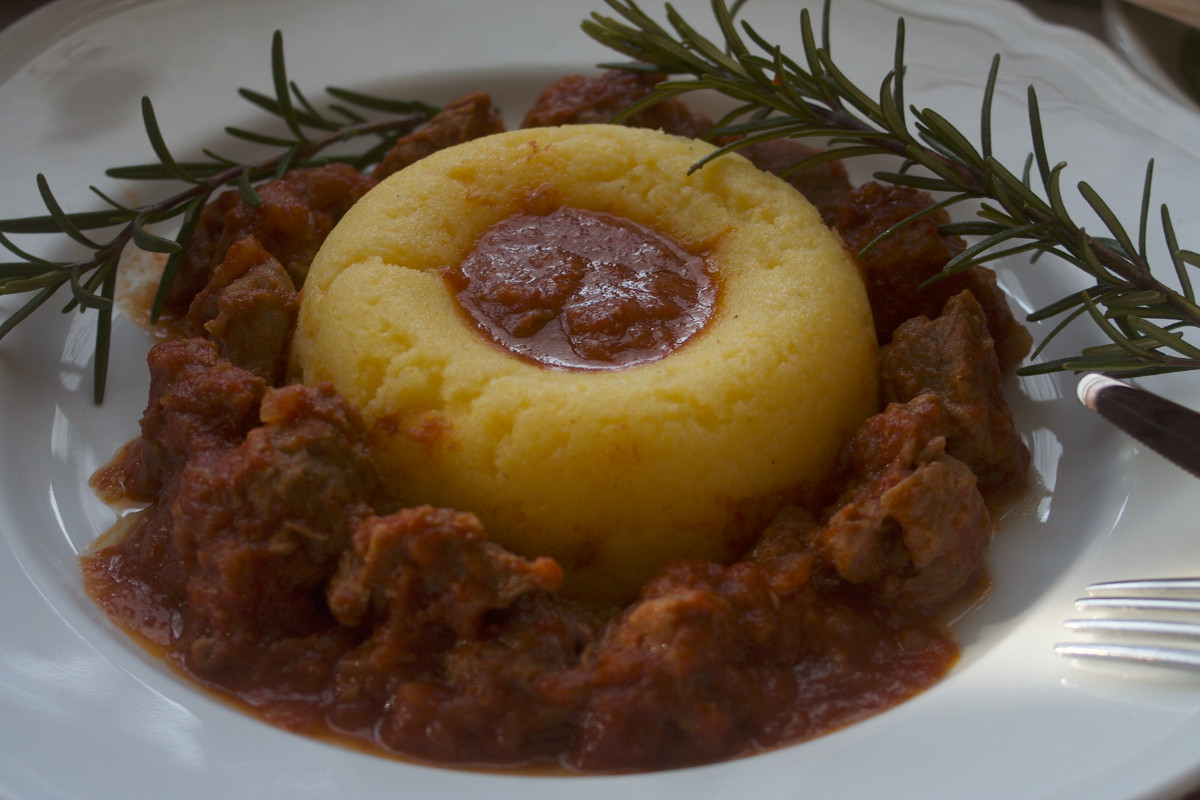 The origins of Polenta

But let’s start finding out about its origins.

Polenta comes from yellow corn flour which in Italian is called Granturco. The original name of the plant is Zea Mays, a grass plant originating from Central America.

When the first seeds reached the Mediterranean right after the discovery of America in 1492, they were called grano turco which means foreign seed, since the word Turco in Italian indicates something foreign.

Corn (in Italian is Mais) is the true name of the mother of polenta, it is a word which comes from mahiz, the element which was used by the indigenous people of the small island of Hispaniola.

This is the place where Columbus first met the indigenous of America, who used mahiz as the main element of their daily diet.

The population used all of the mahiz parts: with the ears, the leaves and the stalks of the cob, they made alcoholic drinks, sugar, animal feeds, roof tops; the cobs, when ready to be eaten, would be cooked on the fire or would be ground, to make a fine yellow flour. The green cobs, instead, would be boiled or cooked under the ashes. They used to mix mahiz with fish or cheese, with sauces hot and spicy.

This plant had its own deity, the goddess Xilotl, to whom human sacrifices were made every year. This cruel custom is explained by the fact that the plant was an essential part of the economy of those populations, since it grew in a very short period of time (80 days circa) and it grew virtually every where, therefore it held a very important place in the social life of these people.

No wonder then that it become immediately so sought after, once it was introduced in Europe.

The first European plantations of corn go back to the beginning of ‘500 in Spain, by the Moriscos, a population of Arabs which escaped the fights against the Spanish. They used the corn to feed their animals. In the beginning, in Europe, the new plant was looked upon with suspicion, slowly then, it was accepted and understood, and then finally approved with enthusiasm.

The true diffusion of the corn was in the XVII century in Spain, France, Italy, The Balkans, Ukraine.

Why here? Because it was the perfect clima where it could grow, not too hot, not too cold, dry just as needed. 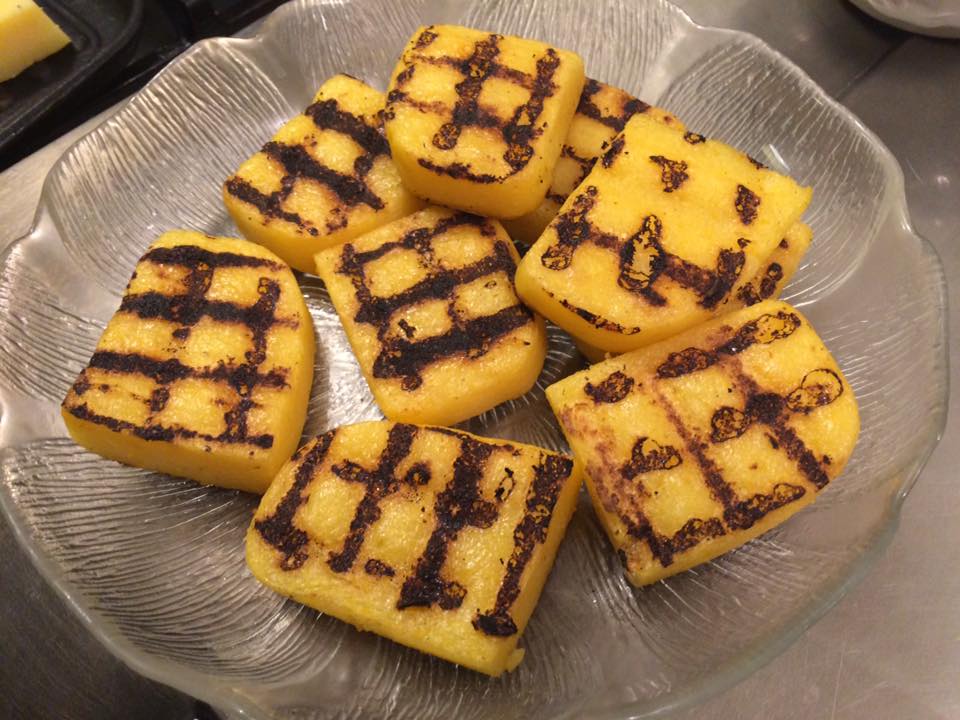 Polenta is the heart of a Venetian house, the symbol of its unique cuisine. Here in Veneto we have tried every possible gastronomical culinary combination.

In Venice people used to make cakes with yellow flour (Zaeti or Pinza) and in Friuli, people used to make polenta with grano saraceno, before the discovery of America. Because of this, it is thought that the mahiz was introduced to our area though our commercial routes with the middle east, a very long time ago, but it become widely grown after Columbus discovery.

Everywhere in Veneto and Friuli, the preparation is the same: you cook the yellow flour in water or broth and at the end you add butter or milk or cheese or sauce or meat.

The now famous recipes of polenta impastizada, of polenta infasolà, of polenta onta, etc., comes from this antique way of preparing the Roman puls, a mix of flour and water which was eaten all over the Roman empire.

Back in Roman times, the polenta was made with barley, a harder and bigger cereal than corn, which did not offer the consistency of yellow flour. It was used to be mixed with milk, cheese or lamb meat. Puls was known all over the Mediterranean and the writer Apicio speaks of the puls punica, made with flour, cheese, honey and eggs.

The yellow polenta solved immediately the alimentary problems of the poor populations of the Veneto region, till the XVIII century, when the pellagra appeared, which was caused by the continuous use of the polenta without the add on of other important food supplements (the people were so poor that they would only eat the polenta without anything else).

– It took years to find out that it was caused by a deficiency of vitamins. And people realised that the Maya and Incas did not get ill because they consumed the polenta with other food. – 

It was the Republic of Venice which introduced corn to the lagoon of Polesine and Friuli. According to Giovanni Beggio the first plantation dates back to 1554.

From then on the entire Pianura Padana ate mainly food made with corn flour. Initially the cobs used to be boiled and grilled, but later in Polesine during the same year corn was grounded for the first time and mixed with water, so to create a soft mash batter, now known as Polenta.

The importance of Polenta

The polenta represented the basis of the daily diet of farmers. The first job of the morning was to grill the polenta on the griddle polenta su la gradela.

During the summer months, the polenta was eaten both for breakfast and for lunch, with the difference that during the latter, it would be consumed with soup or meat or vegetables.

The polenta was the queen of the evening meal, when it would be put onto a large panara (chopping wooden board) and cut into slices. These slices would be cut according to whom would be eating it: small if they were children, bigger and chunky ones if they were adults, making sure to save some for the morning after.

Together with polenta the farmers would eat a lot of other vegetables such as savoy cabbage, cabbage, onions, turnips and carrots; in an old Venetian tradition, the evening meal was composed of three big slices of polenta dipped into a plate of bitter radicchio, seasoned with salt, pepper, lots of vinegar and a tear-drop of oil.

Nowadays we have forgotten about this healthy and cheap tradition, but this old meal called piato da poareti (poor people dish) holds still today a place of honour of on any gourmet menu. The only variation is that instead of using radicchio, they use new salad and the dish is served in between other dishes.

Salad and polenta on the same plate could seem a strange thing to try, but believe you me, after you tried it you can only admire the ability that the Venetian cuisine has been able to show by turning such a basic and common food into a refined gastronomic dish.

These are only some of the most delicious Venetian dishes made with Polenta:

Here instead are some of the most famous old recipes (thanks to Cookinvenice.com)

Boil the beans in salted hot water. Drain as soon as they are al dente and put them inside a copper pan where you will first have fried the pancetta and the onion with a little oil,salt and pepper. Cook the beans for about 5 minutes then add the water for the polenta and always stirring bring back to boil. Add slowly the polenta flour and keep stirring with a wooden spoon, always in the same direction. Cook for about an hour. Serve hot.

In the copper pan warm the milk with the butter then pour slowly the polenta flour and cook for 45 minutes always stirring with a wooden spoon always in the same direction. Pour the polenta onto a big wooden chopping board and let it cool. Take a lasagne pie dish and butter it. Roll the pastry onto the pie dish, place slices of polenta into it, cover with a layer of ragu, pour some grated cheese and repeat the stages until finished.

Put in the oven at 180 degrees until the top is nice and golden.

So next time you look at Polenta and think it just tastes simply plain, remember that it has very little calories and it can be eaten with anything!

Remember you can take a Cooking lesson and learn all about Polenta with me at Cook In Venice.

"It is the uncertainty that charms one. A mist mak

Bread: the food that unites the majority of the wo