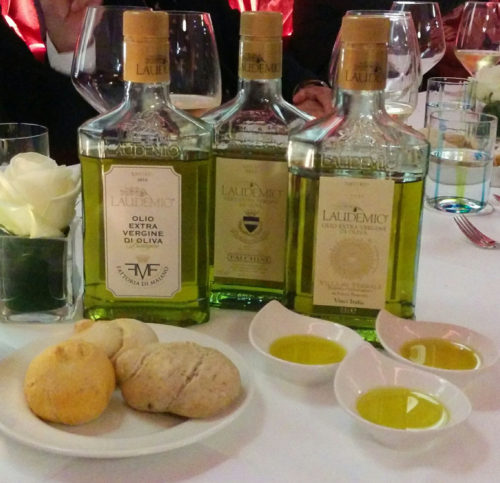 How often does it happen to you to be invited to attend a prestigious High Cuisine Competition in a stunning location on the Canal Grande in Venice and to find out, when you get there, that you will be in the technical jury of this competition?

Well, to me, not very often at all!

So, when I received the invite by the world famous Tuscan olive oil producers Laudemio and by Sina Hotels, I took me literally 3 seconds to decide if I was going to accept or not, all based on if I had something suitable to wear for the occasion or not – all girls out there will totally understand what I mean! 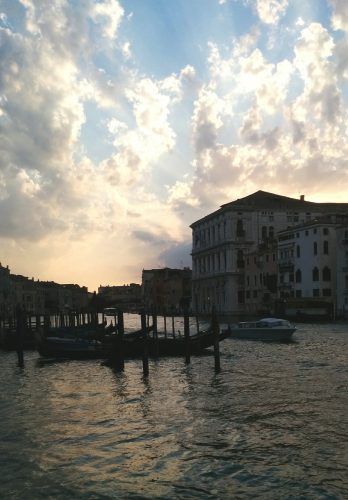 Of course, I said yes and so, on 7th June 2017, I was delighted to attend to the First Edition of Premio LAUDEMIO® 2017 at Antinoo’s Lounge & Restaurant of the Centurion Palace Hotel on the Gran Canal in Venice.

On my arrival I was welcome by the kind and smiling staff of the Centurion Palace Hotel, one of the most luxurious and enchanting location in Venice, a boutique hotel with 50 rooms, set in one of the most beautiful spots on the Canal Grande.  The hotel, as well as being very modern and stylish, offers a great view of San Marco and has a little terrace where, on request, you can have your breakfast or even dinner. 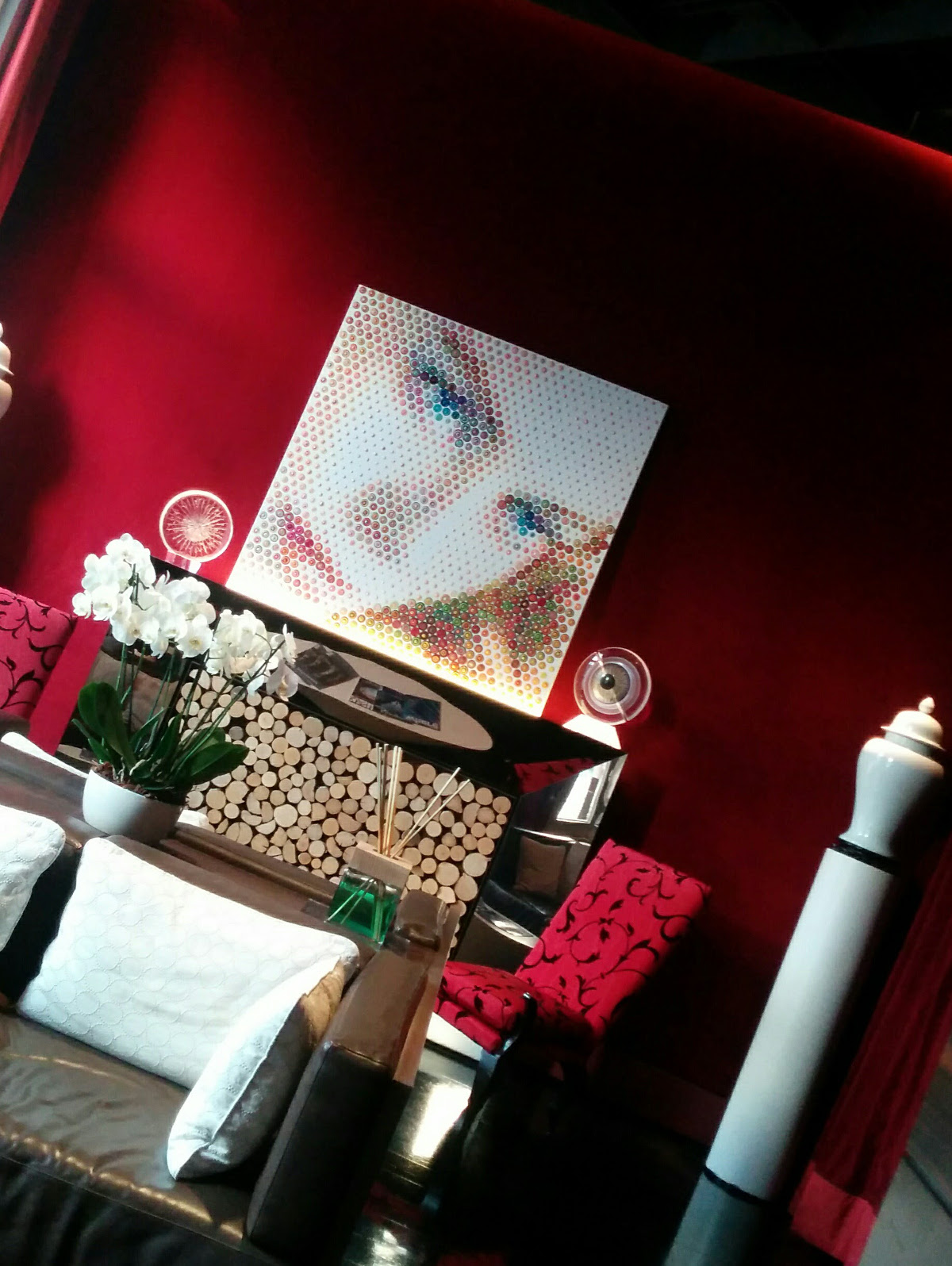 After a quick tour of the property, I was introduced to the organizers of the event: Marquise Diana Frescobaldi, from Marchesi Frescobaldi, one of the oldest wine producers in Tuscany and also President of the Consorzio del Laudemio®; Fausto Arrighi, a very famous Italian gourmet critic and Michelin Guide Director until 2012; Count Francesco Miari Fulcis of Fattoria di Maiano and Villa di Modolo; Michelangelo Benetton, chief Operating Officer of Sina Hotels. 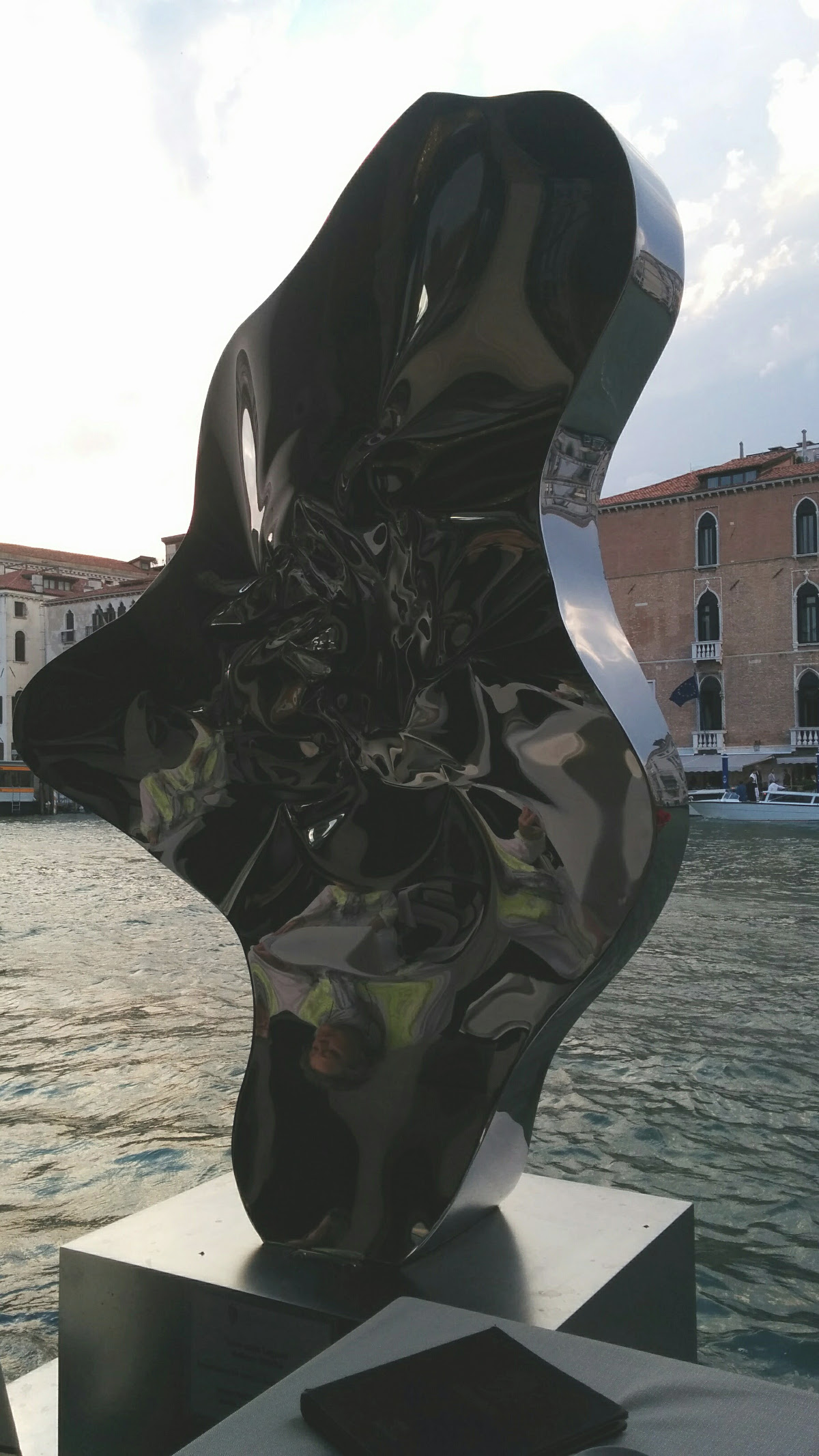 After a couple of glasses of delicious sparkling wine, we were all invited to sit and start our journey through what would be one of the most memorable food and social experiences of my life.

But let’s start, first, by explaining what the Competition Premio LAUDEMIO® 2017 is all about! 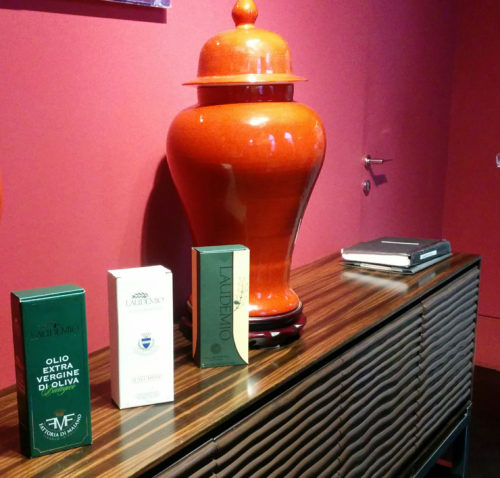 First Edition – The Quintessence of Tuscany meets The High Cuisine

The “Premio LAUDEMIO®” was created by Consorzio del Laudemio® with the intent of promoting and valorize the  LAUDEMIO® Extra Virgin Olive Oil in the kitchen of some of the most important well-known Chefs.

The LAUDEMIO® extra virgin olive oil undergoes a very careful selection, both during harvesting and the pressing phase. This guarantees an extremely high level of quality, making it an extremely suitable olive oil for seasoning and dressing.  This oil tastes amazing just dripped over a few slices of fresh bread (and trust me, we had more than a few slices!) or over some fresh season vegetables and you only need a few drops. But it is also excellent when used to enrich or complement a high cuisine dish. 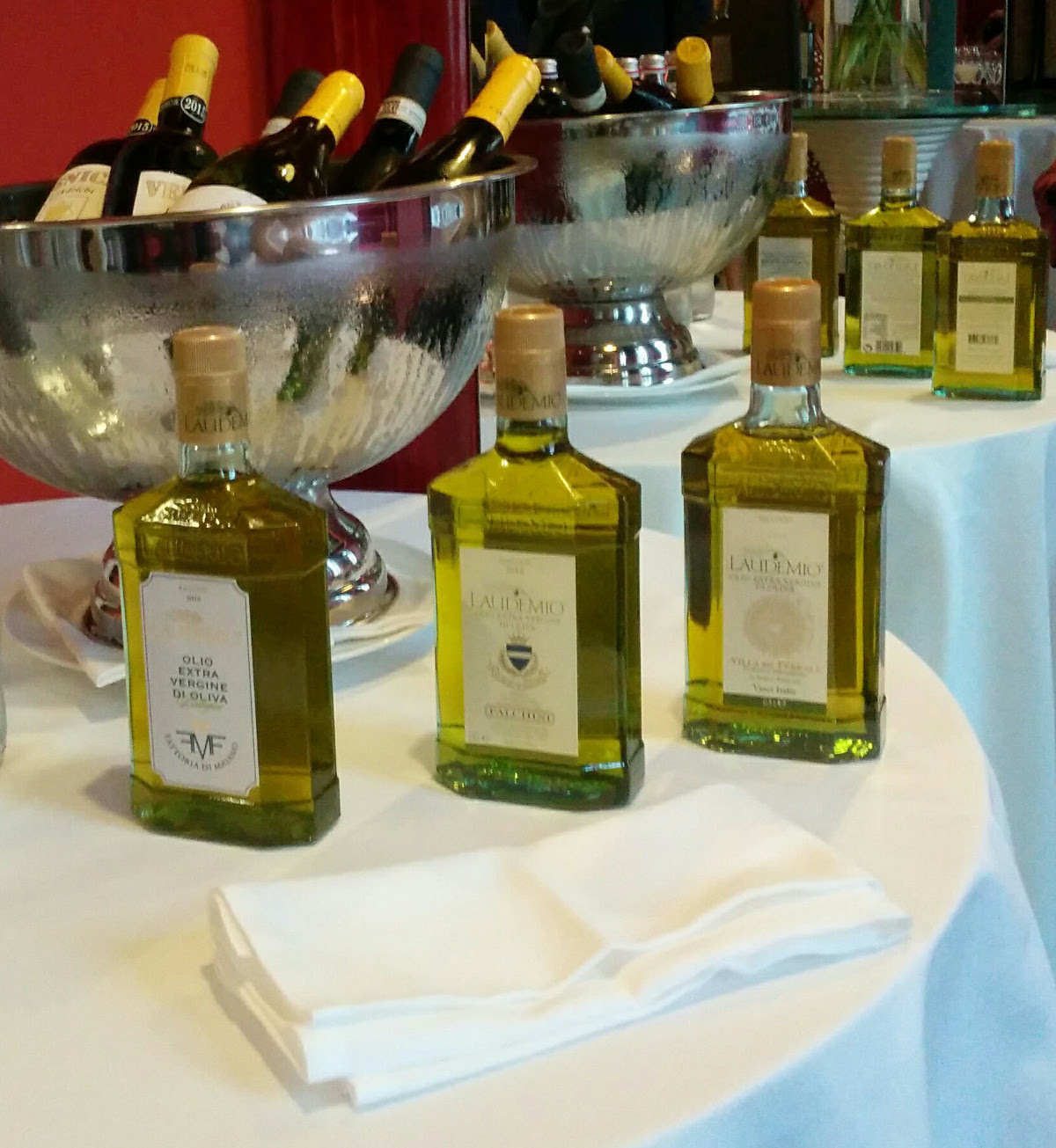 The Selection of Extra Virgin Olive Oil by Laudemio

The main characteristics of this oil are the bright color and a spicy note, which is not, though, too aggressive or peppery on the palate. It is not an overpowering type of oil.

To spread the knowledge of this unique and prestigious product, the Consorzio decided to set up a competition aimed at prestigious Chefs.

“An important project – explains Diana Frescobaldi – that is born from the desire to convey to the Chefs our values, to explain to them, not only the quality of LAUDEMIO® oil, but, above all, how we manage to achieve this quality, what are the choices that we make, from the countryside to bottling, to preservation. In creating a great dish the main ingredient is the creativity of the chef, his genius, but a great dish can not ignore the quality of the raw materials used.”

The Competition, chaired by Fausto Arrighi, a long-time gourmet critic and Michelin Guide Director for 35 years, has been held for the first time this year and has included eight dinners in the eight prestigious Italian restaurants in seven major cities.

It all started on 25th January 2017 in Rome at the Ristorante Aroma hosted by Chef Giuseppe di Iorio. The competition then moved on 15th February to Ristorante I Portici in Bologna with the creations by the Chef Agostino Iacobucci. On 1st march 2017 the dinner took place in Tuscany, at the Ristorante Ora d’Aria in Florence with Chef Marco Stabile. The jury then moved to Ristorante Magorabin with the Chef Marcello Trentini in Piemonte on 14th March 2017. The contest then took place on 28th March 2017 in Milan for the first stop on the trendy city, at Ristorante Sushi B with the Japanese Chef Nobuya Niimori.

On 11th May the competition landed in Naples at Ristorante Il Comandante with Chef Salvatore Bianco. It then moved on again to Milan on 25th May to Ristorante Vun of the Hotel Park Hyatt with Chef Andrea Aprea.

The competition finally ended here in Venice at the Antinoo’s Lounge & Restaurant of the Centurion Palace Hotel, with a dinner hosted by Chef Massimo Livan.

Each Chef was invited to interpret the LAUDEMIO® oil through a four-course menu: appetizer, first dish, dish and dessert, the latter out of competition, and, in each “stage”, a technical jury was invited to discuss and judge the dishes, presided by Diana Frescobaldi and Fausto Arrighi.

Once all dinners took place, the jury elected three finalists and the three chefs have been asked to prepare their creations at a gala dinner in Milan next fall.

I was lucky enough to be seated at the main table and smart enough to pick one of the best spots, with a great view of the Canal Grande and the passing gondolas and boats! 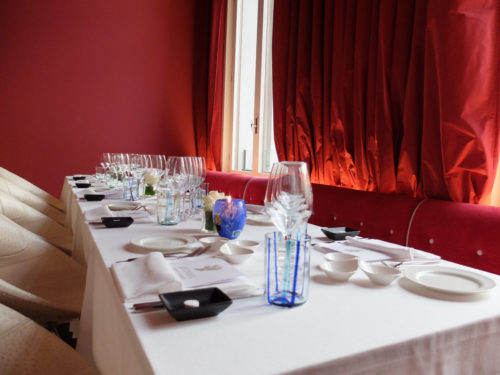 The setting of Premio Laudemio® In Venice by Maria Giovanna Romanelli

We started the dinner with a small entrée of Scampi in Saor, the typical sweet and sour dish from Venice, nicely interpreted by Chef Massimo Livan.

It was a curious combination of flavors, which I am still debating about. 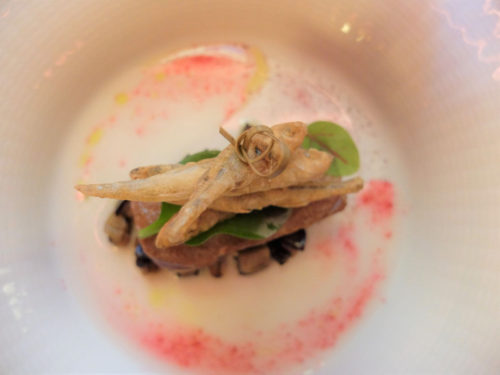 The first course was composed by Fresh Homemade Tagliolini with Lobster, a bed of crispy spinach and ginger, all aromatized by LAUDEMIO® Falchini olive oil.

Simple but well harmonized flavors, I barely tasted the ginger. 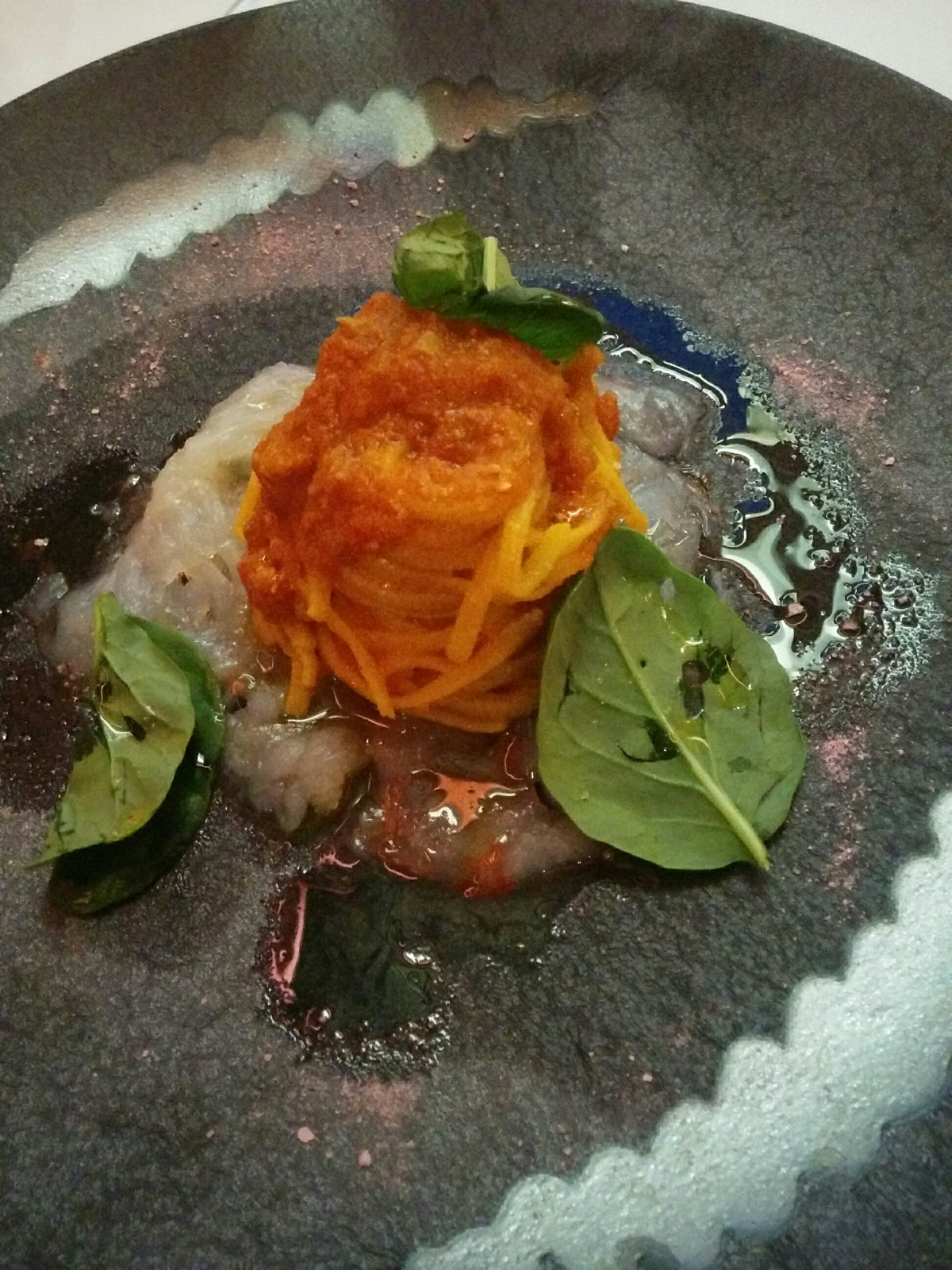 The main course turned out to be the best, Marjoram Crusted John Dory with black and white cream of potatoes and Lagoon Salicornia Seaweed, enriched by drops of LAUDEMIO® Villa del Ferrale olive oil. This was by far my favorite dish: the creaminess of the potatoes and the ink of the cuttlefish were delicious. And it screamed all the way: Venice!!! 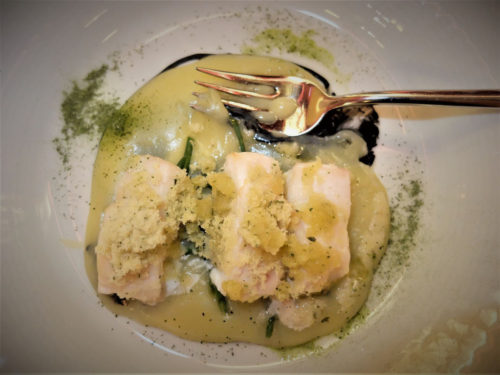 John dory with Ink and potatoes by Maria Giovanna Romanelli

The meal ended with a Lime and Butter biscuit crumble with Chantilly cream and raspberries: light, crunchy and perfect to end the meal. 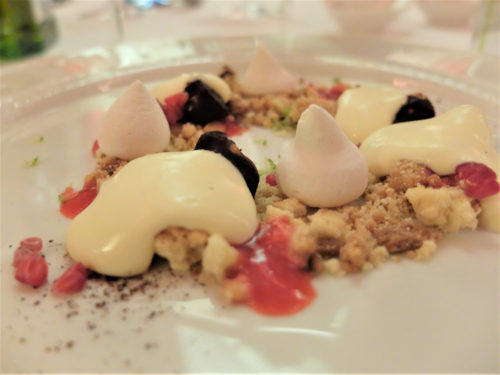 The dishes were paired with high quality wines from the Tuscany and Veneto.

We were then introduced to Chef Massimo Livan, a local Venetian chef, the creative mind behind those wonderful dishes we had the pleasure of tasting. 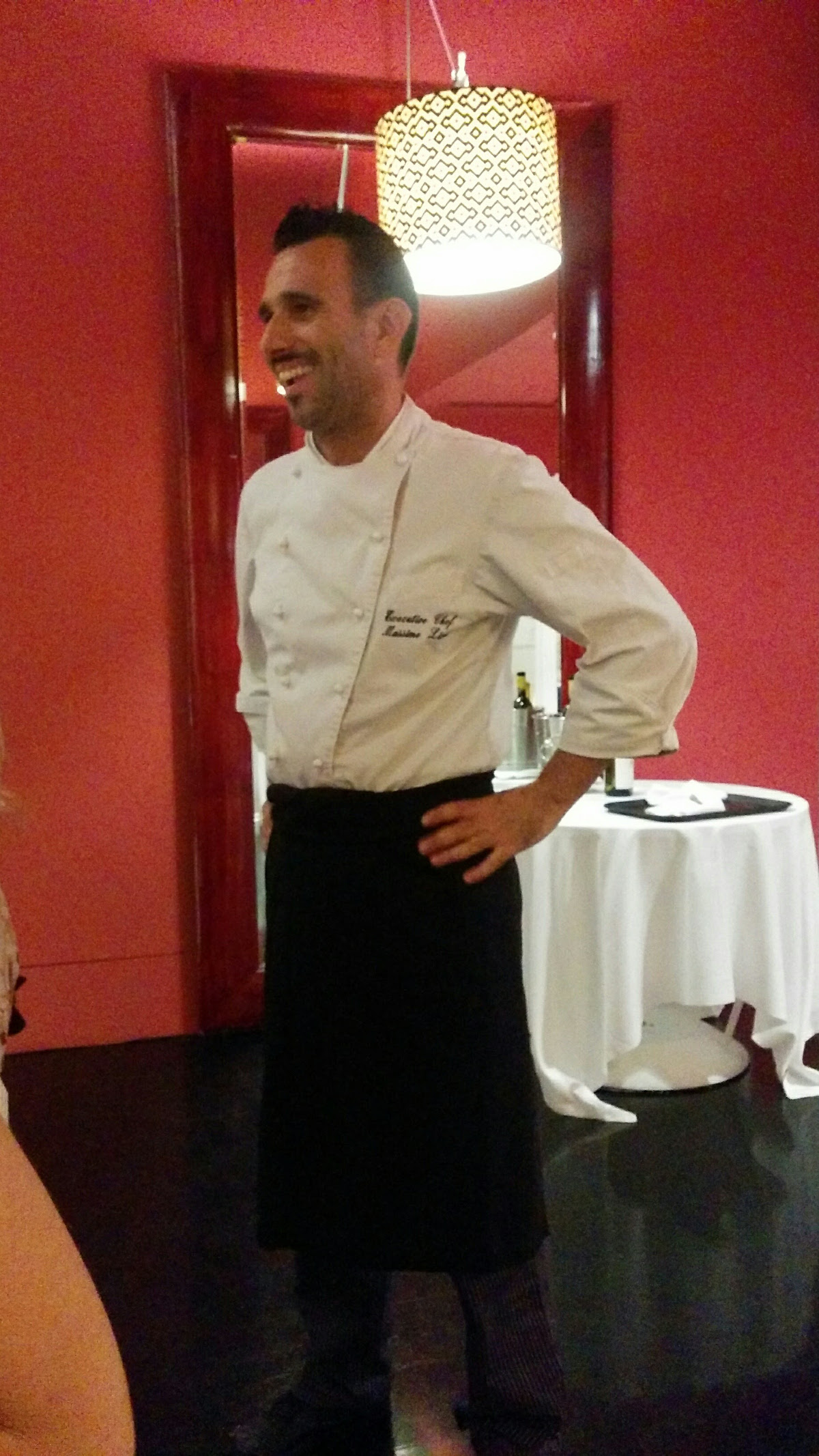 At the end of the meal Fausto Arrighi asked us to fill in a technical sheet assessing and judging each dish – our comments would be used to decide if Chef Massimo Livan will be one of the lucky three finalists who would go in the Fall to the final stage of Premio LAUDEMIO®: in Milan.

Laudemio is composed of twenty-one Tuscan farms, all historic producers of Cru Oil.

The term Laudemio, which comes from the peasant tradition of the feudal society, indicated the best part of the harvest that was reserved and destined for the lord.

In 1988, a small group of olive oil producers got together and founded the Consorzio del Laudemio®, for the protection and valorization of valuable olive growing, to provide consumers with superior quality oil.

Today, there are twenty-one associate farms, all united with the intent to produce, under a single brand and in the same territory, excellent quality oil, guaranteed by strict rules and controls.

If a company wishes to produce oil under the Laudemio® brand, it must first join the Consortium and subject themselves to a strict protocol.

The strict production standards take into account the soil and indicate precisely the most suitable cultivars, the cultivation systems and all practices related to harvesting, grinding, bottling and conservation, with the ultimate aim of preserving the excellence of a natural product in all phases of the chain, so that man does not harm what nature has created.

The rules includes severe regulation on the olive groves (how big and the location), on the harvesting of the olives (how much and precise dates etc.), the pressing which must be strictly cold, a technical commission composed by experts who test the various oils with severe technical requirements.

And the choice of the packaging is not overlooked either!

The oil is presented on octagonal section bottle, to emphasize and enhance the excellence of Laudemio®. The model, deposited by the Consortium, is inspired by the retro design of French perfume bottles: the facets and the transparent glass exalt the color and bright oil reflexes.

Once the dinner ended and our comments were duly recorded, it was time for us to go and leave this stunning location and this unforgettable event.  But we did not leave empty handed! We were lucky enough to be gifted with a beautiful bottle of Laudemio® Extra Virgin Olive Oil which I will treasure and try to combine with amazing culinary creations!

A big thank you to Maria Giovanna Romanelli of La Nuova Venezia for sharing some of her photos with me!

And as I was walking along the empty street of Venice, on a cold (yes, bloody freezing cold) June evening, I realised I lucky I am to live in such a unique city, surrounded by beauty in every corner, doing a job which I love, getting to meet amazing people and eating all the time some of the best food in the world!

Yes, life can be hard sometime! 😉

A day of Art in Venice

Made In Italy by Laura Morelli – Book Giveaway!