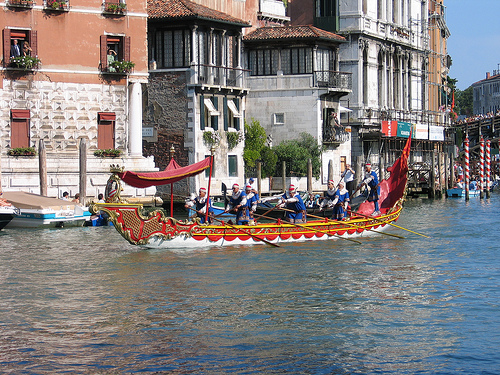 The Regata Storica is one of the most typical celebrations of Venice and it is the main event on the annual races calendar of Voga alla Veneta, a unique style of rowing practised for thousands of years on the lagoon.

The Regatta is held on the water of the spectacular Grand Canal, the longest canal of Venice. It dates back to the second half of the 13th and today it is even more spectacular by the fantastic display of historic costumes which precede the event. A parade of tens and tens of typical Venetian Renaissance boats like the Bissone and the Bucintoro carrying the Doge, his wife and all the major figures of the Venetian Renaissance Magistrate reconstructs faithfully the glorious past of the Serenissima. Back in the 13th century the first Regatta took place on 10th January 1315 under the rule of Doge Giovanni Soranzo. It was started to celebrate the magnificence of the city with a water parade when a foreign prince came to Venice or for the election of a Doge or a new Pope and also to make sure for the city to have expert oarsmen. Today, first of all, you can admire the historical procession and as soon as that is finished the real competition. The Bucintoro, the boat representing the Serenissima, is at the head of the parade. The procession commemorates the arrival of Caterina Cornaro, Queen of Cyprus, when she renounced to the throne in favour of Venice and the welcome which the Venetian reserved her. Then the competition starts. The audience is all fired up since it is mainly composed by local Venetian who support their own sestiere team. At the end of the Regatta the canals are filled with boats full of people drinking, eating and all together having a good time. Today the competition is divided in 4 separate competitions organised by age category and type of boat. 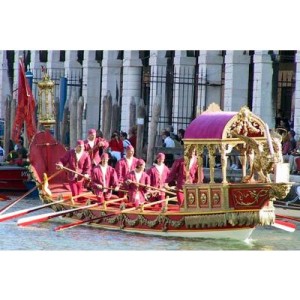 The first race is that of very youngoarmen on boats called pupparini , with 2 oars. They are very technical boats, which put to test the ability of these young oarsmens. Immediately after this, there is the women’s regatta held on mascarete (called this ways since the bow looks like the Bauta mask, the typical Venetian male mask). These are light two oars boats which used to be used in the past by the courtesans.
The third regatta is totally made up of men and it is dedicated to the heavy caorline with 6 oars. These were boats used along the rivers and they might have used a sail during their trips on the lagoon. 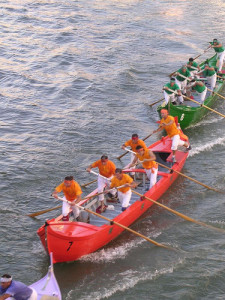 But the most famous and exciting is the Regata dei campionissimi su gondolini (the Regatta of the best Champions on gondolini)- the gondolini are light 2 oars boats shaped like a gondola The gondolini must race along the Canal Grande up to the finish line, which is placed in front of the famous “machina”, an amazing floating stage placed right in front of Ca’ Foscari, Venice University.
Winning the Canalasso, the way the Venetian call the Canal , is the biggest dream of every competing oarsman!

At 16.00
Historic parade: parade of historical boats and costumes along the Canal Grande.

GOOD LUCK TO ALL COMPETITORS!

The palaces of Canal Grande In Venice