Here in Venice every occasion is good to celebrate with either cakes, drinks or else.

This time we celebrate San Martino and we do it on 11th November.

All over the province of Venice bakeries and cakes shops sell the traditional San Martino cake, a short-crust cake covered in sweets and icing in the shape of a Knight riding his horse.

Originally people used to make this cake and the tradition says men used to give it to their loved ones. Nowadays, parents usually buy the cake for their children. This year I decided to make my own (considering the cost of each small cake is around 8-10 Euros and you have to give one for each child!). See the recipes and pictures at the end of the post.

But first of all let’s have a look at the legend of San Martino.

The Legend of San Martino


Martin was born in 316/317 A.D. in the Roman province of Pannonia, now known as Hungary. His father, who was a soldier, called him Martin in honour of the God of war Mars.

When Martin was a child, his parents moved to Pavia and he grew here. In Pavia Martin asked to become a catechumen, but because he was the son of a Roman Veteran he could only become a soldier.

At 15 he was forced to enter in the army by his father, who despised his love for Christ and his repulsion for weapons. Martin became a circitor, who is the man in charge of doing the night rounds and to inspect the guard posts.

It was during one of those nights that Martin met, right in the middle of winter, a poor man, half naked. Martin felt sorry for him and after taking his sword, cut his cape in two and gave half of it to the poor man.

When he went to bed, Martin dreamt Christ and he was smiling at him while he was wearing the cape. Martin was a soldier for over 20 years but always acted as a real Christian.

When he was about 40, he left the army and decided to become a monk. He went to visit bishop Ilario and the bishop declared him a exorcist so he could dedicate his remaining life to the study of God and Jesus.

One night Martin dreamt he had to convert his parents so he left for Hungary and managed to convert his mother, but not his father. This was an area were the Arianism was widely spread.

After roaming around Europe for few years he went back to bishop Ilario who made him a priest. Martin retired in a villa near Poitiers, in France, were he preached the word of Jesus and were he created the monastery of Ligugè, the oldest in Europe. After many years he was declared bishop of Tours and he lived there for 26 years.

He was an energetic and active bishop, great preacher. He became a missionary amongst pagans and for this he created Marmoutier, the first centre where priests were trained into the word of God. From tour to Marmoutier for many years he carried on preaching the word of Christ and converting people, fighting against evil and heresy.

He died the 8th November 397 and his funerals took place on the 11th November. His relics were moved everywhere during the years, but a fragment is held in Ligugè, his first monastery.

As in many other parts of Italy, Saint Martin is celebrated with the products of the season: new wine, chestnuts and a lot of little poems.

(This is a beautiful evening, to stay near the fireplace, surrounded by chestnuts and with a nice glass of wine, WW Saint Martin)


The most famous is

(Saint Martin went to the attic, to find his wife, his wife was not there, he fell with his bum to the floor, WW Saint Martin)


But in Venice the children used to celebrate also by going around the town banging on pots and pans and ringing bells. The also used to sing:

(what a lovely smell of pots, if we eat well we will rehearse well, if you give us good wine we will sing, We were sent by Saint martin so you can do some charity, since he did a lot of charity. Be careful, we are a lot and we are all hungry, D not give us little otherwise we will stay here for long)


If they managed to get sweets and cakes at the end of the songs, they will then sing:

(And with this we thank you of your good will, we will come back next year if you will, Viva Saint Martin)


If they did not get anything they will sing:


The Cake of San Martino 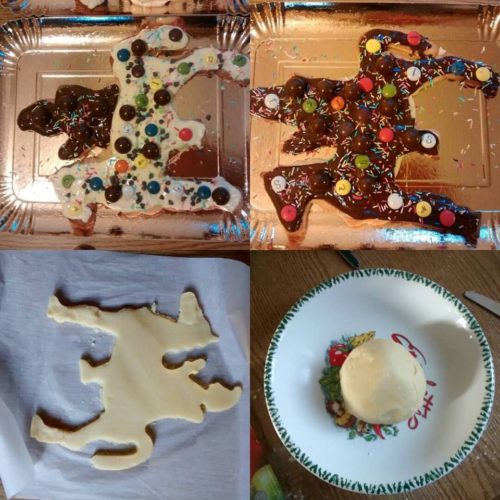 San Martino cake is made with short-crust pastry, icing and lots and lots of sweets on top. The shape is that of Saint Martin on his horse with his sword.

Make a short-crust pastry, shape as in the picture, cook for 20 minutes, cover with chocolate and sweet.

Tolfa, little pearl on the Roman Hills, perfect for an archeological camp!