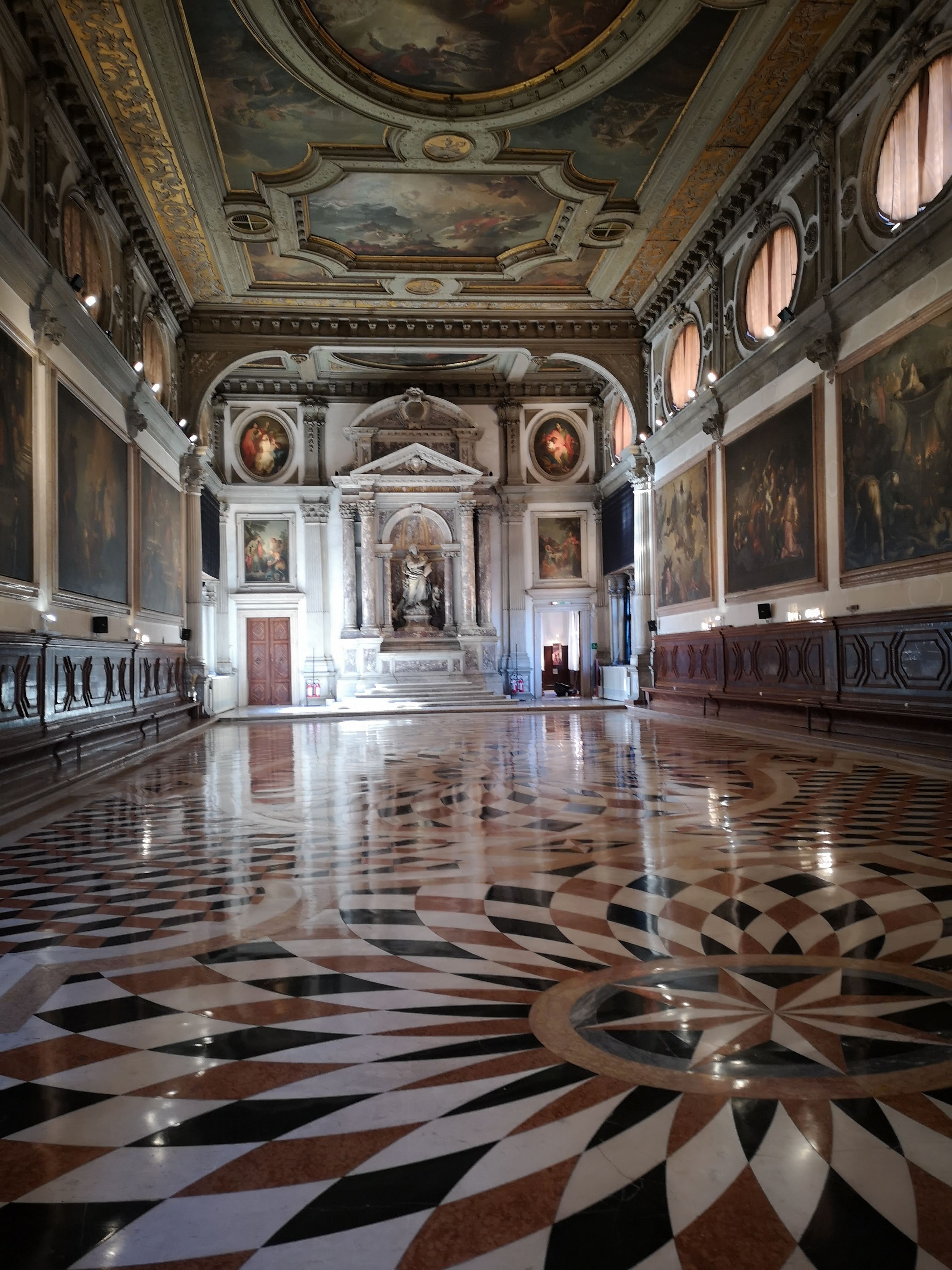 A few days ago I wrote about the wonderful experience of visiting Atelier Pietro Longhi in Venice.

On the same day, Raffaele Dessì, PR and event organizer of the Atelier, took me also to visit the stunning Scuola Grande San Giovanni Evangelista, where at the moment you can also view the beautiful exhibition Storie di Moda, an historic costume display of incredible high quality. All of the costumes were designed and created by Francesco Briggi, the mind and soul of Atelier Pietro Longhi.

Even though this is their busiest period of the year, Carnival time, Raffaele very kindly took most of the day off to show me around the Scuola and the Exhibition. 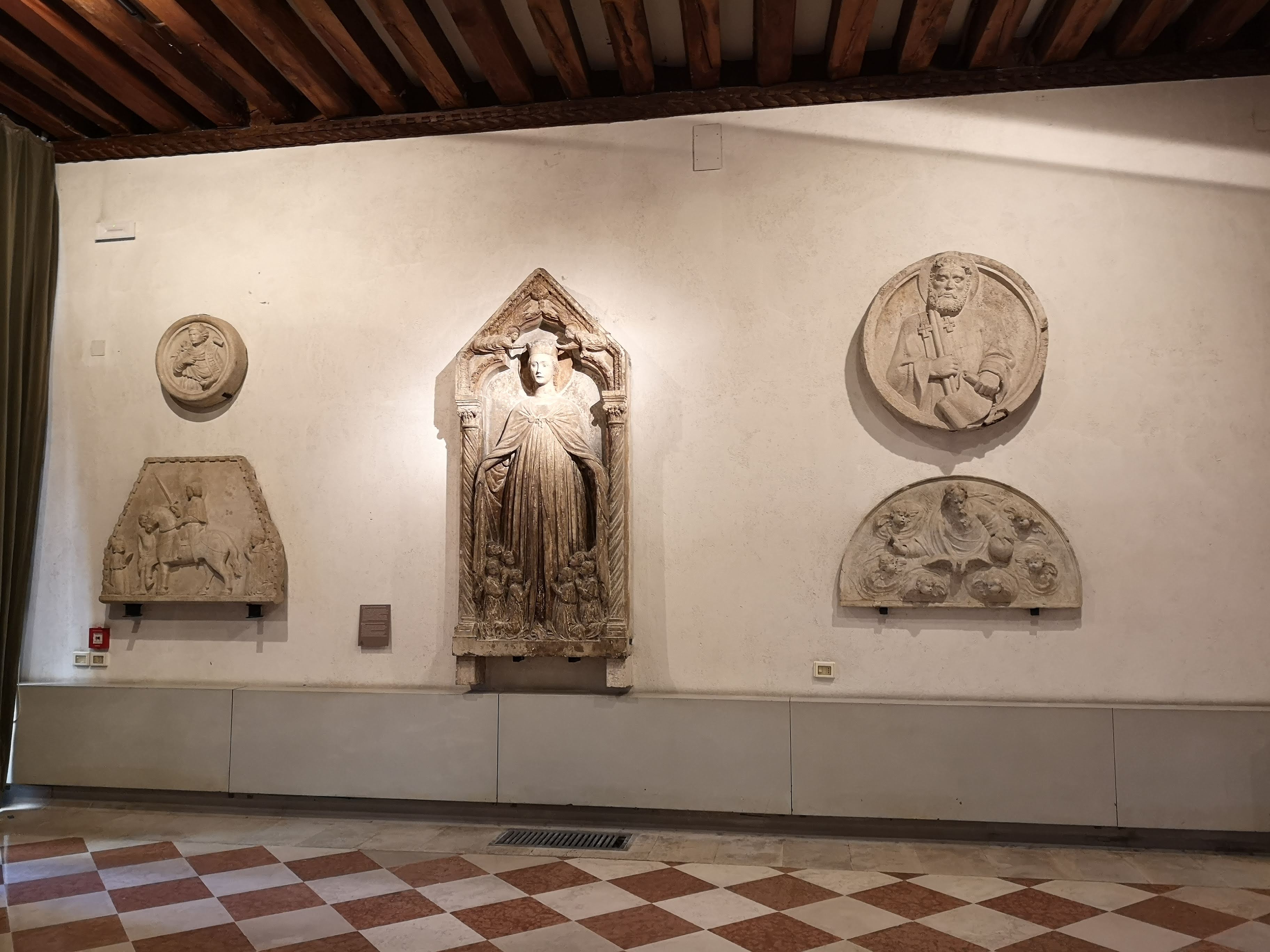 Today I am going to tell you about the Scuola, simply because there is so much to say about my experience with Raffaele, which a post is not enough!

On our arrival we were met by Jelena Ivanisevic, the architect at the Scuola Grande San Giovanni Evangelista, a delightful lady, very knowledgeable, funny and passionate about the history of the complex. It was an honour talking to her: she literally made the Scuola come alive, with all the anecdotes and stories she told us!

But let’s start from the beginning! 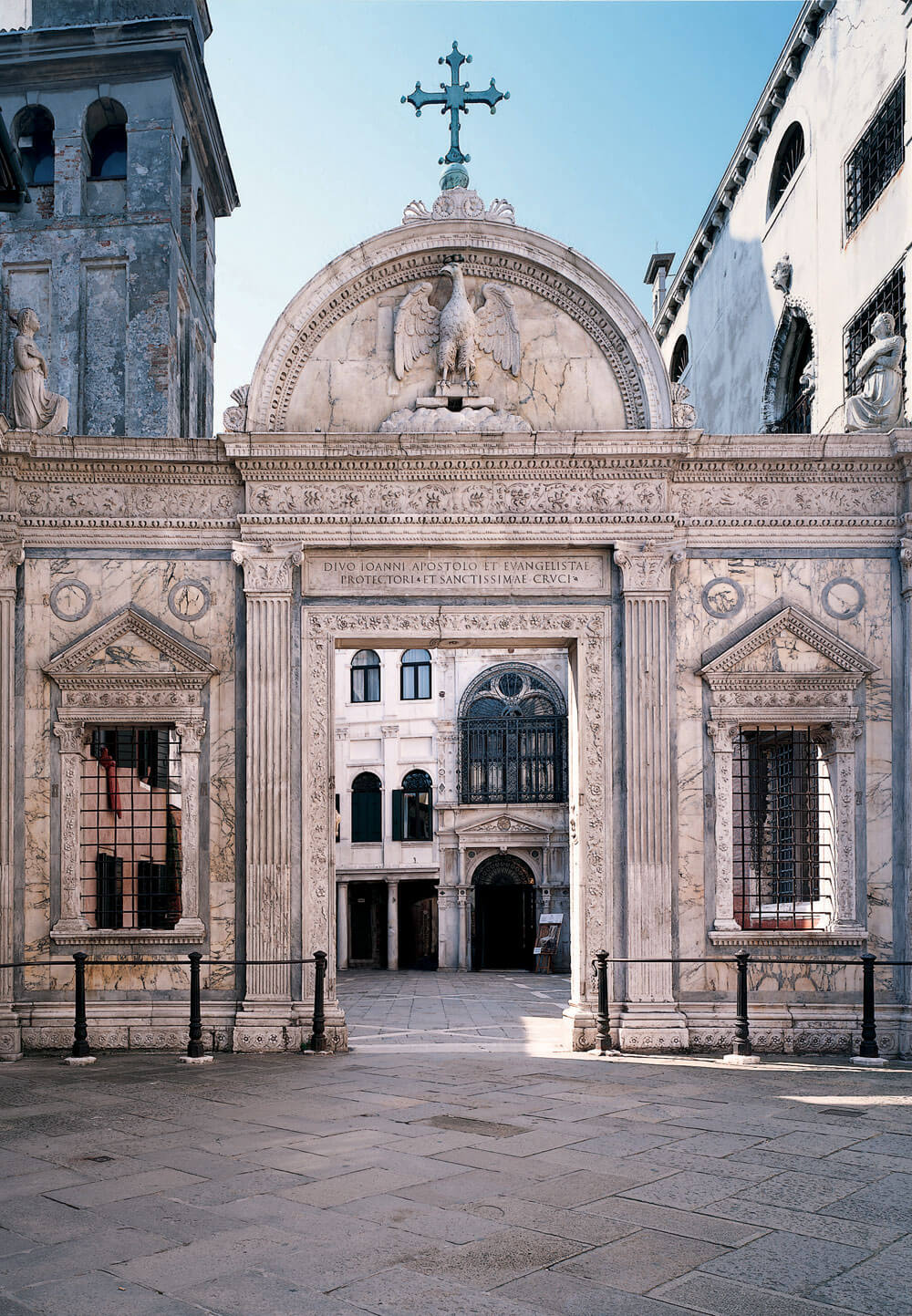 The magnificent monumental complex of the Scuola Grande San Giovanni Evangelista is located in the sestiere of San Polo, the smallest of the six sestieri of Venice, a quiet place with a very particular connotation, inside a small beautiful courtyard.

It almost seems to have been enclosed in this courtyard to be defended and protected, with its imposing portal full of beautiful Renaissance sculptural decorations, built by the Bottega dei Lombardi.

Entering the small courtyard and crossing the portal, one almost has the impression of being transported to another era, leaving behind tourists and souvenir shops, and being welcomed by architectural and decorative works of great artistic value telling the glories and the atmosphere of an aristocratic Venice.

First of all, though,  let me explain you what a Scuola Grande is! 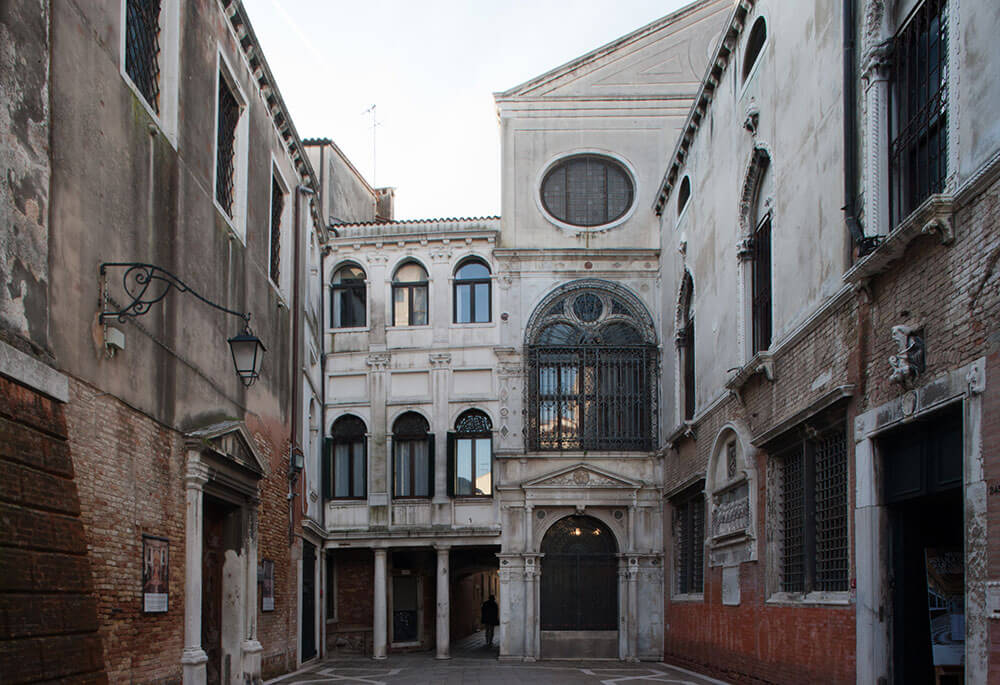 What is Scuola Grande?

Scuola Grande is the term with which, in the ancient Republic of Venice, was indicated a confraternity or association of lay citizens who, inspired by the principles of Christian charity, dedicated themselves to mutual material and spiritual assistance and religious practices related to the devotion of their patron. (Scuola Grande San Giovanni Evangelista, Guide Marsilio)

After the fall of the Republic in 1797, the schools were suppressed by Napoleonic edict in 1807, but during the nineteenth century some, including San Giovanni, were reconstituted. 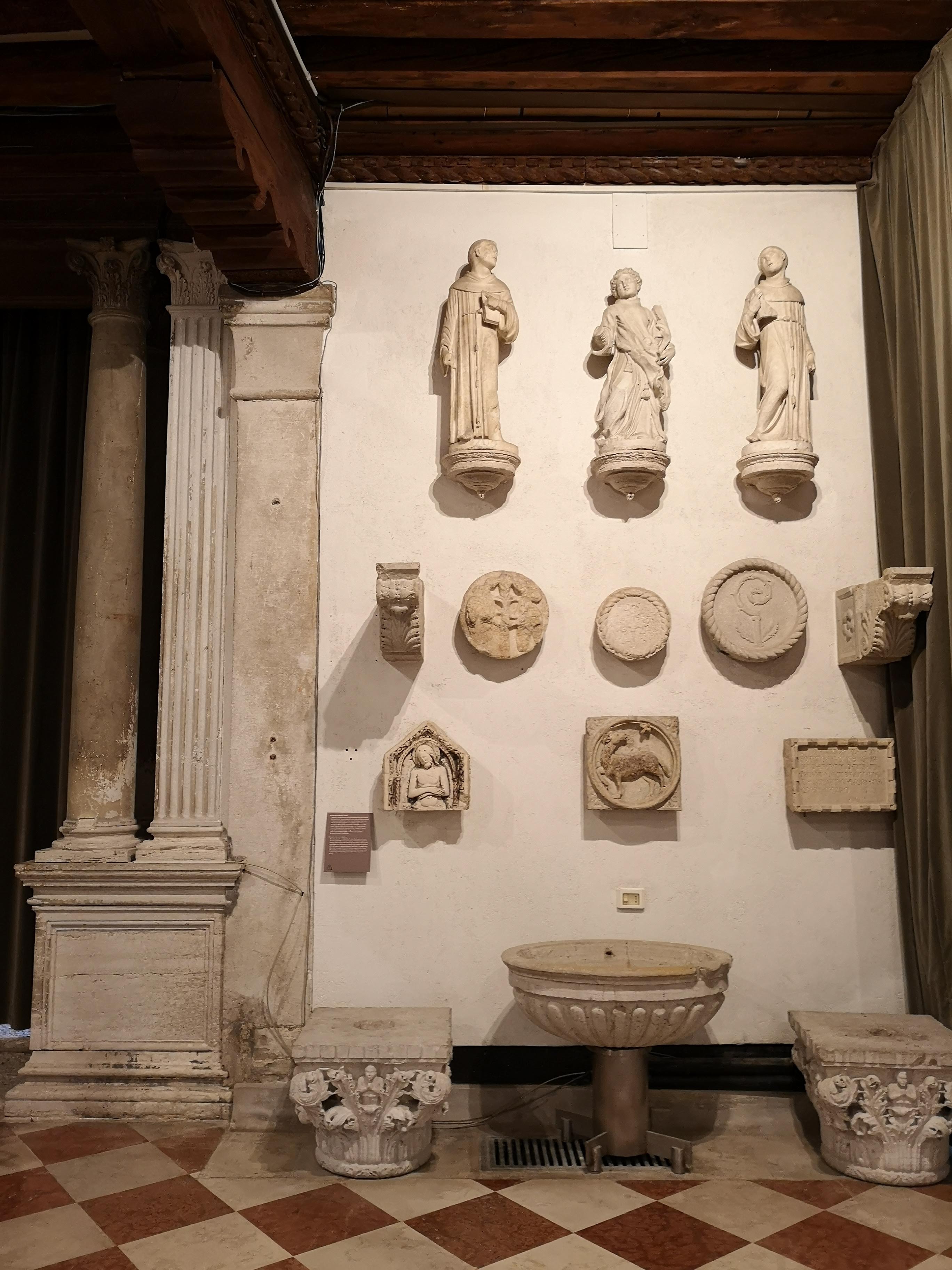 The one of S. Giovanni, constituted in 1261, is the oldest one among the School, which are still active in Venice.

Saved from destruction by Venetian citizens in 1857, it became the headquarters of the Society for the Building Arts, resuming its role as a Confraternity.

In over seven centuries, tons of history lived through these walls: artists of great talent and fame have embellished it with masterpieces of great magnificence which can all be admired by visiting the Halls of the whole complex. 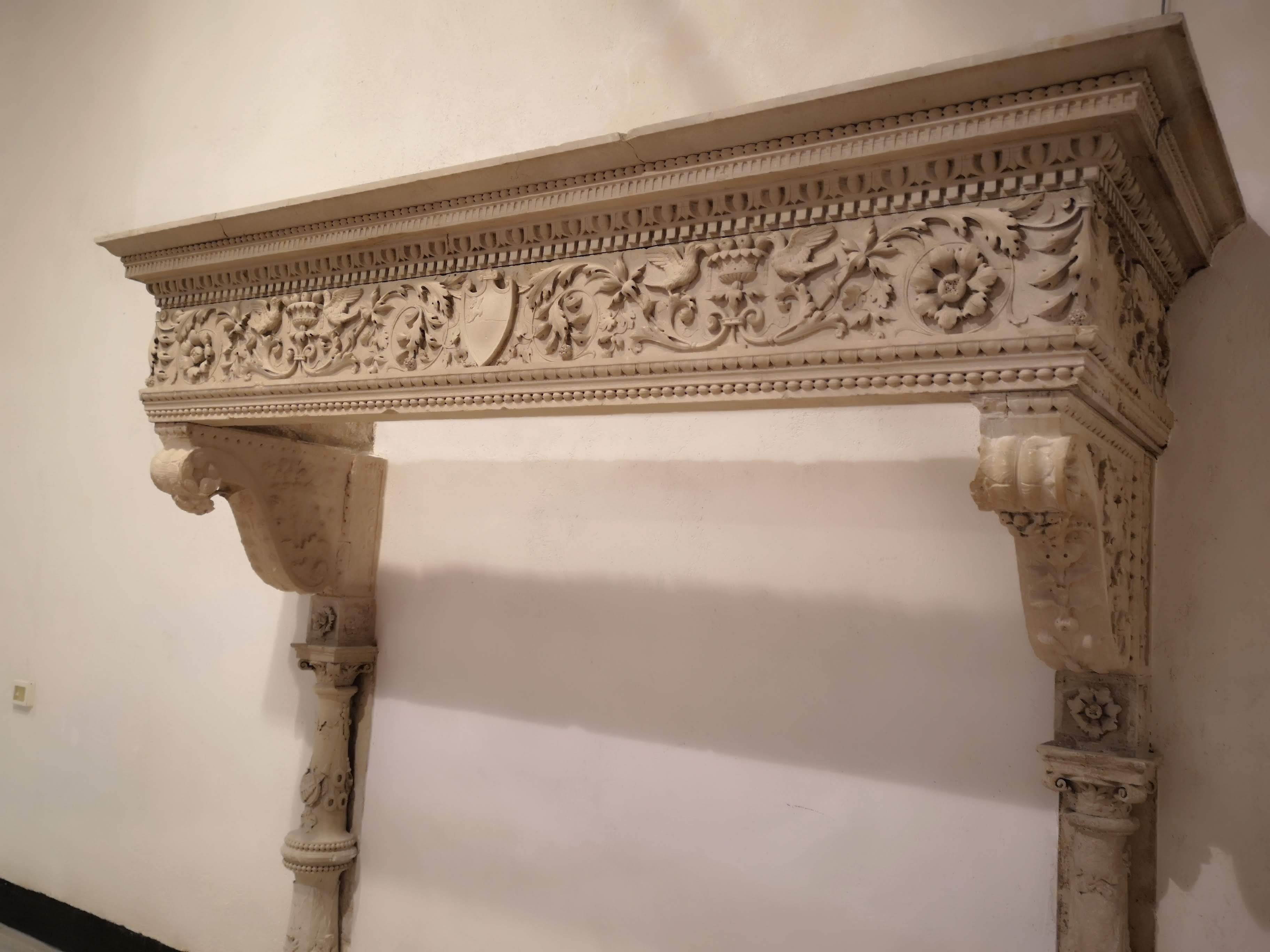 The Brotherhood of the Flagellants

The Scuola was founded by the Fraternita di Frari Battuti, the Brotherhood of Flagellants, in 1261 and it officially moved its headquarters in today’s location in 1301. From here it also took its current name, Scuola Grande San Giovanni Evangelista, from the church dedicated to St John, which now houses the confraternity.

The flagellants were a Catholic movement made up of various religious sects during the Middle Ages, which remained active from the 13th to 15th centuries, characterized by the practice of self-flagellation in public. Flagellation was a form of penance and devotion employed by numerous religious orders. When the custom fell into disuse, the word assumed the moral sense of afflicted. (Wikipedia)

The Brotherhood carried out charity work and assistance, especially by managing the hospice and attending religious rites.

The Brotherhood of the Flagellants was made up of Venetian people from all walks of life: merchants, artisans. To become a member you had to be male, Venetian born and over 20 years old. 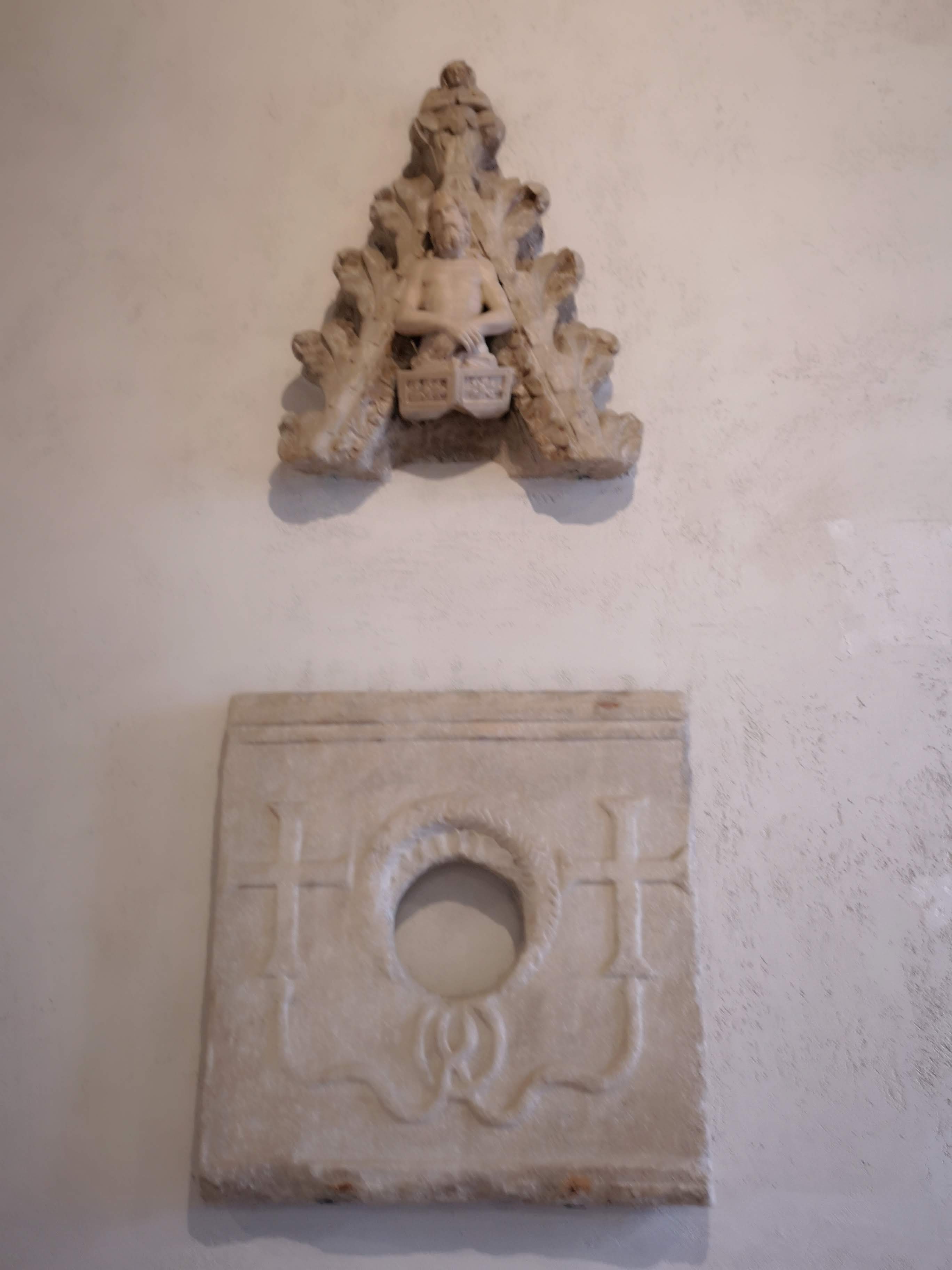 The brotherhoods of the time constituted societies of a working nature, and therefore had capital that accumulated over the years thanks to the commitment of the members. Right from the start the confraternity was placed under state control by the famous Council of Ten, one of the major governing bodies of the Republic of Venice.

…it gave tangible financial support, almost of a banking nature, to the treasury during emergency situations (public loans). The activities of the Scuola were all directed by a close circle of members, the Banca, elected by the General Chapter of brothers, which took in various institutional offices that are still partly covered by the existing Capitolo di Banca e Zonta. (San Giovanni Evangelista – Guide Marsilio) 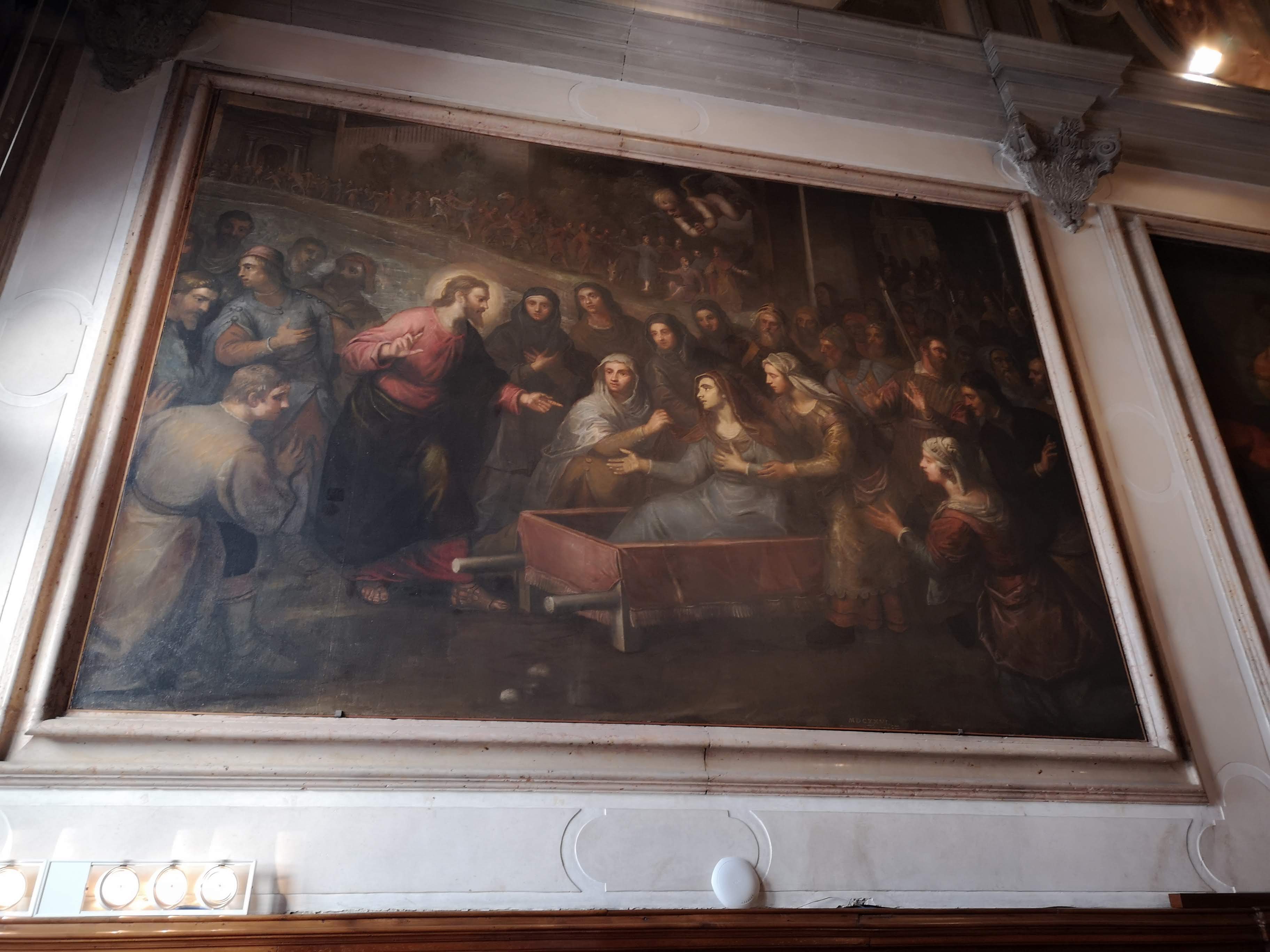 The arrival of the Holy Cross

The most important moment in the life of the Brotherhood was the moment the French Knight Philippe De Mezières, grand chancellor of the Order of Jerusalem and Cyprus, a Templar Knight, donated, in 1369, a precious fragment of the Holy Cross.

Thanks to this donation, which obviously helped to increase the religious prestige of the Scuola, and also to the increased number of brothers and financial resources, the Confraternity, in 1444, built its own monumental complex. It took over three hundred years and was built by the Bottega dei Lombardi, the famous Lombard architects. 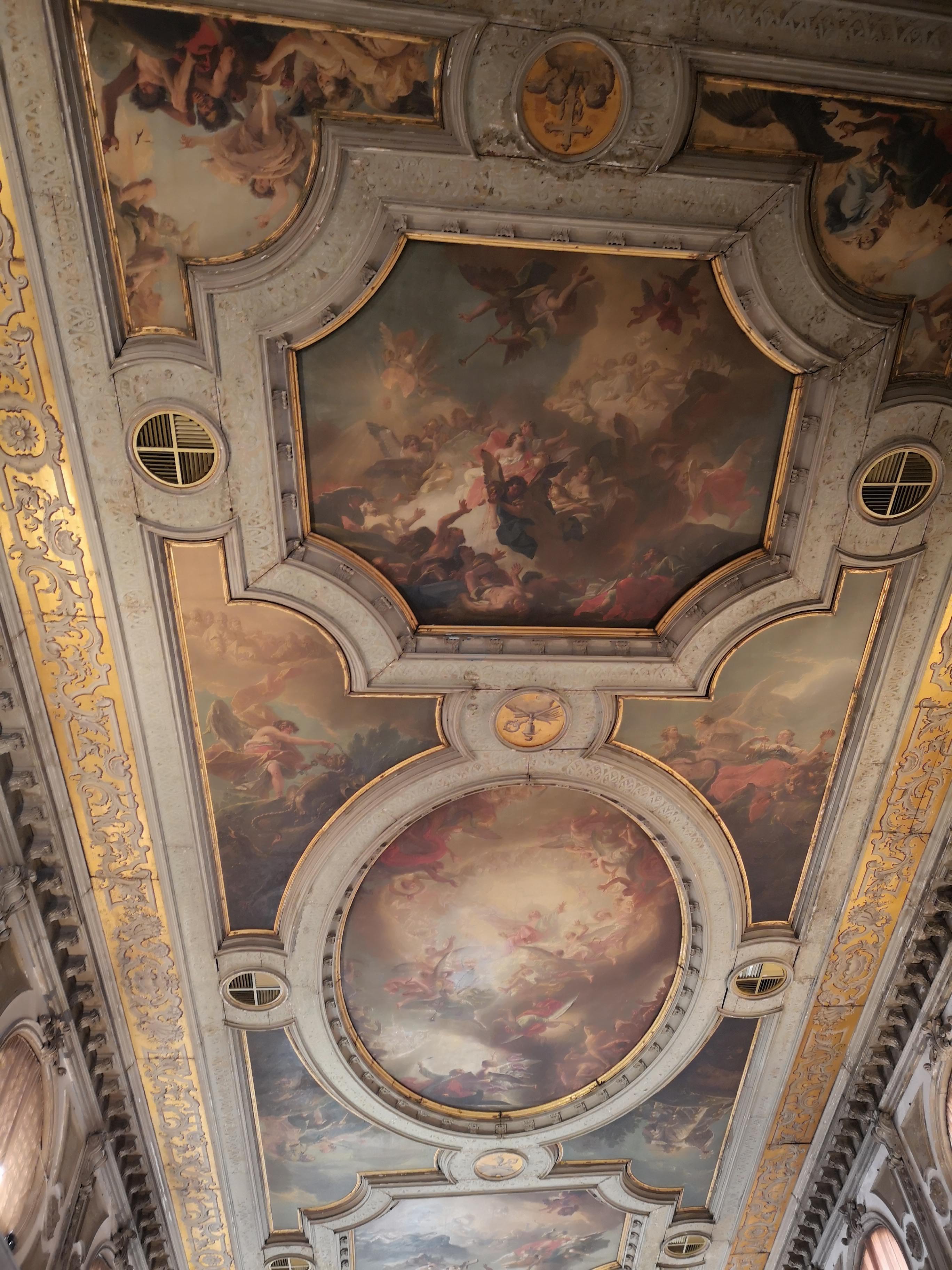 With Venice under the rules of the French, in 1807 a Napoleonic decree prohibited any kind of brotherhood or lay association, so the Scuola transferred its assets to public ownership. The Austrians took over from the French in 1844 and Venice risked the destruction of the school and the transfer to Austria of the floor of the Hall. The Complex was turned into a public warehouse for works of art.

Then in 1855 Gaspare Biondetti Crovato founded the Pia Societa per l’acquisto della Scuola Grande di San Giovanni Evangelista, constituted by 83 Venetian private business men who bought from the Austrians the Scuola for 30,000 Austrian Liras, preventing the demolition of the building.

Many years later, in 1929, the association decided to take back its original name and in 1931 Pope Pius XI gave it the honorary title of arch confraternity.

On your arrival you will first visit the Sala Delle Colonne, the Hall of the Columns. 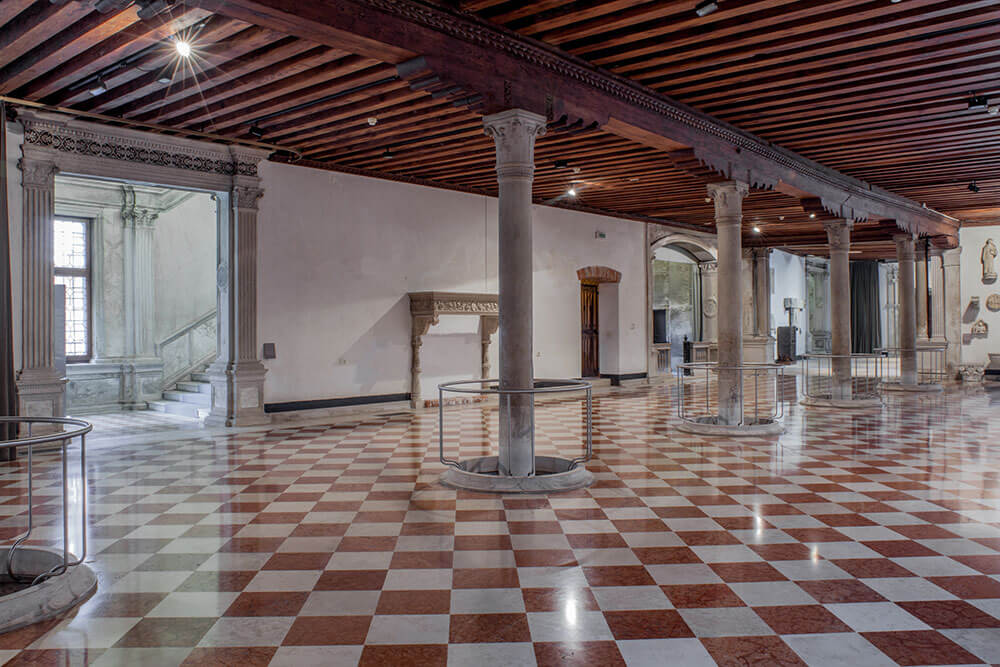 It takes its name from the five large stone columns placed along the middle of the room supporting the long gigantic wooden beam bearing the exposed ceiling beams. The vast environment was intended for the reception of brothers and pilgrims and still retains the medieval appearance of the fifteenth century. 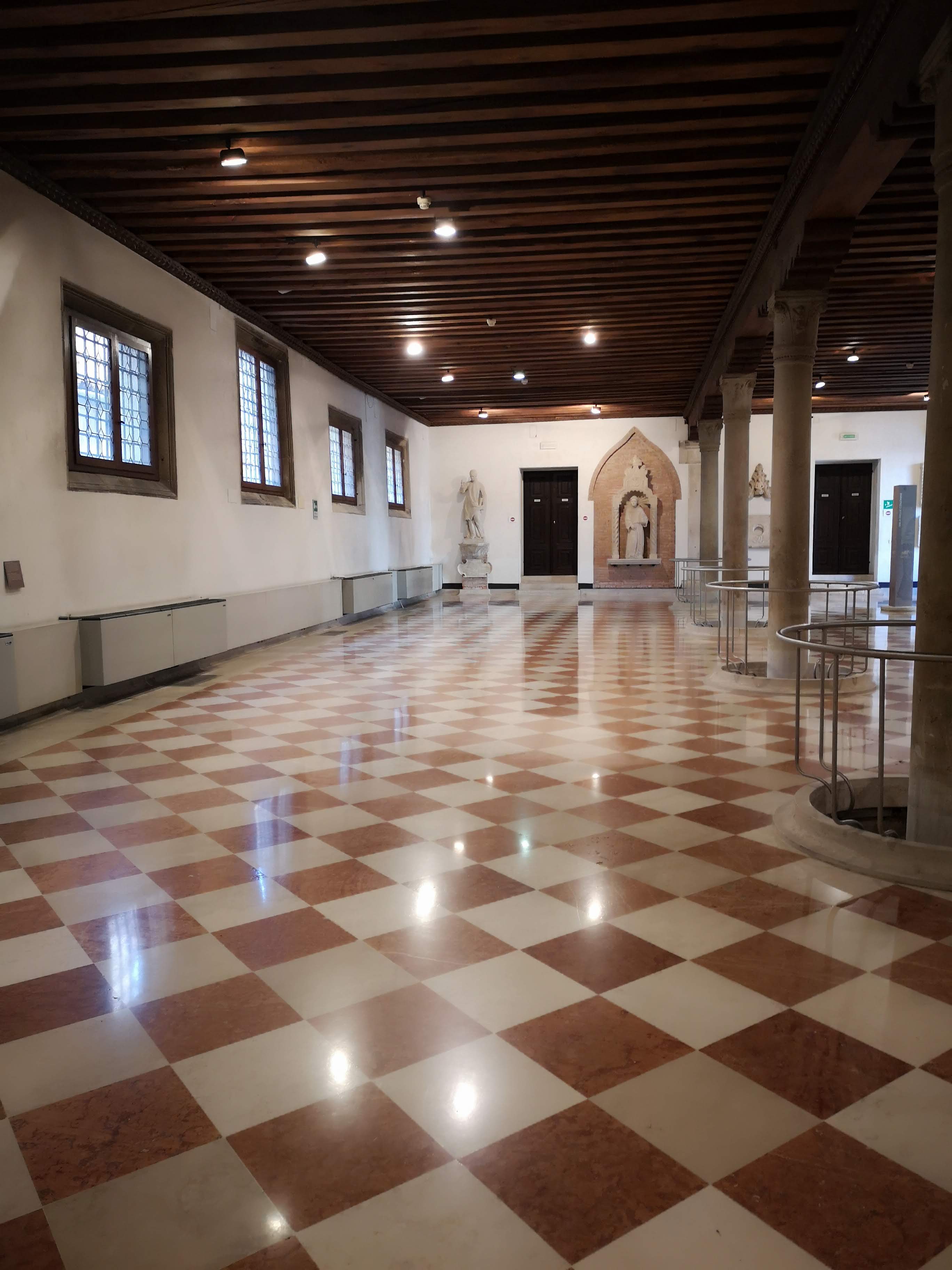 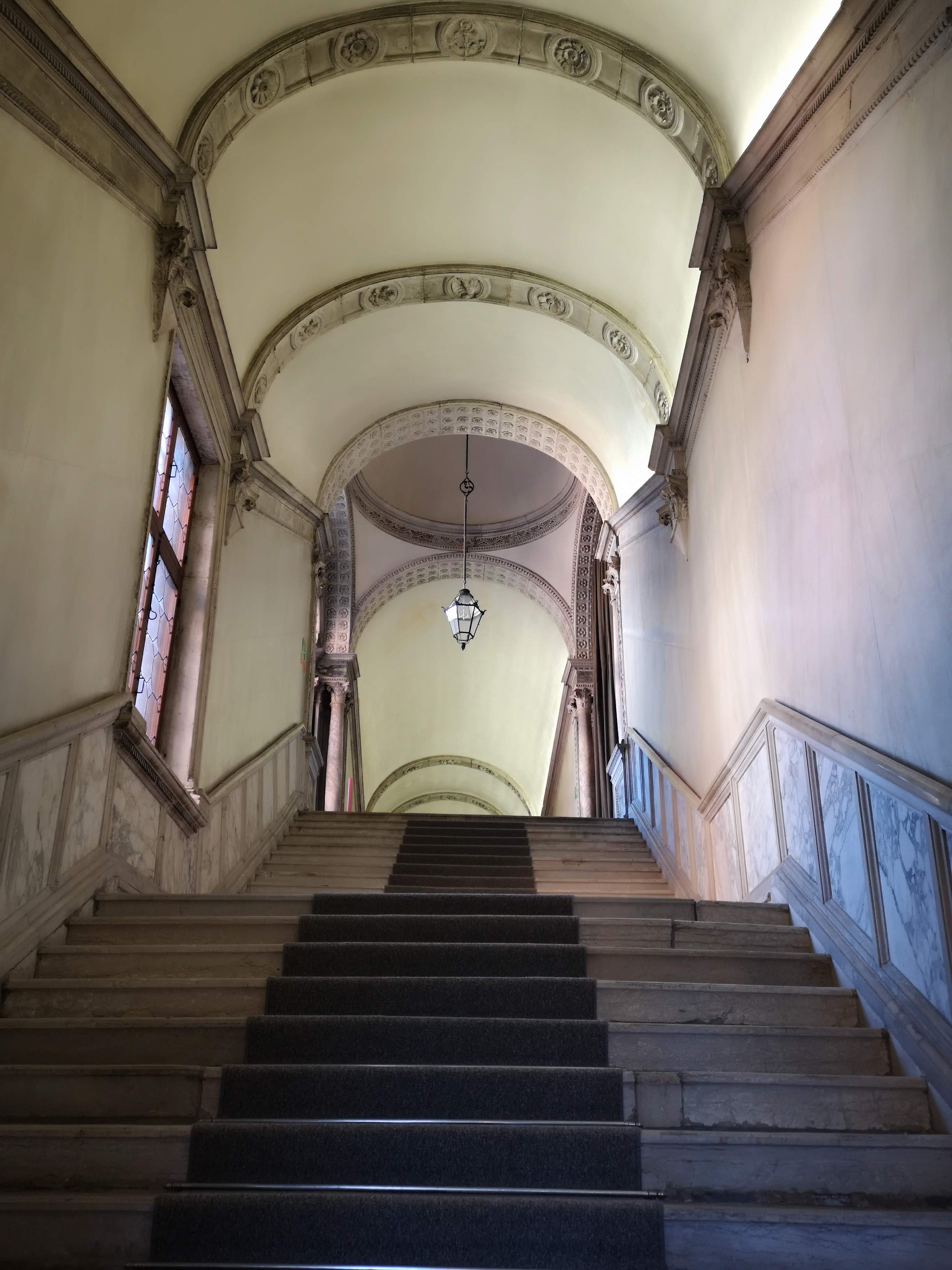 In 1498 the School decided to have a new staircase built. Mauro Codussi, from Bergamo, was called in to create a monumental staircase with two flights, which is accessed by two large Renaissance portals. He created a true masterpiece: the Scalone Monumentale. The lack of space, due to the proximity with the Rio di San Giovanni, was obviated by the ability of Codussi. The perspective lines of the ramps create the illusion of a depth greater than the real one.

Its double-ramp structure welcomes and enchants visitors by offering a unique view of perspective games as it leads to the Hall of St. John or Chapter Room 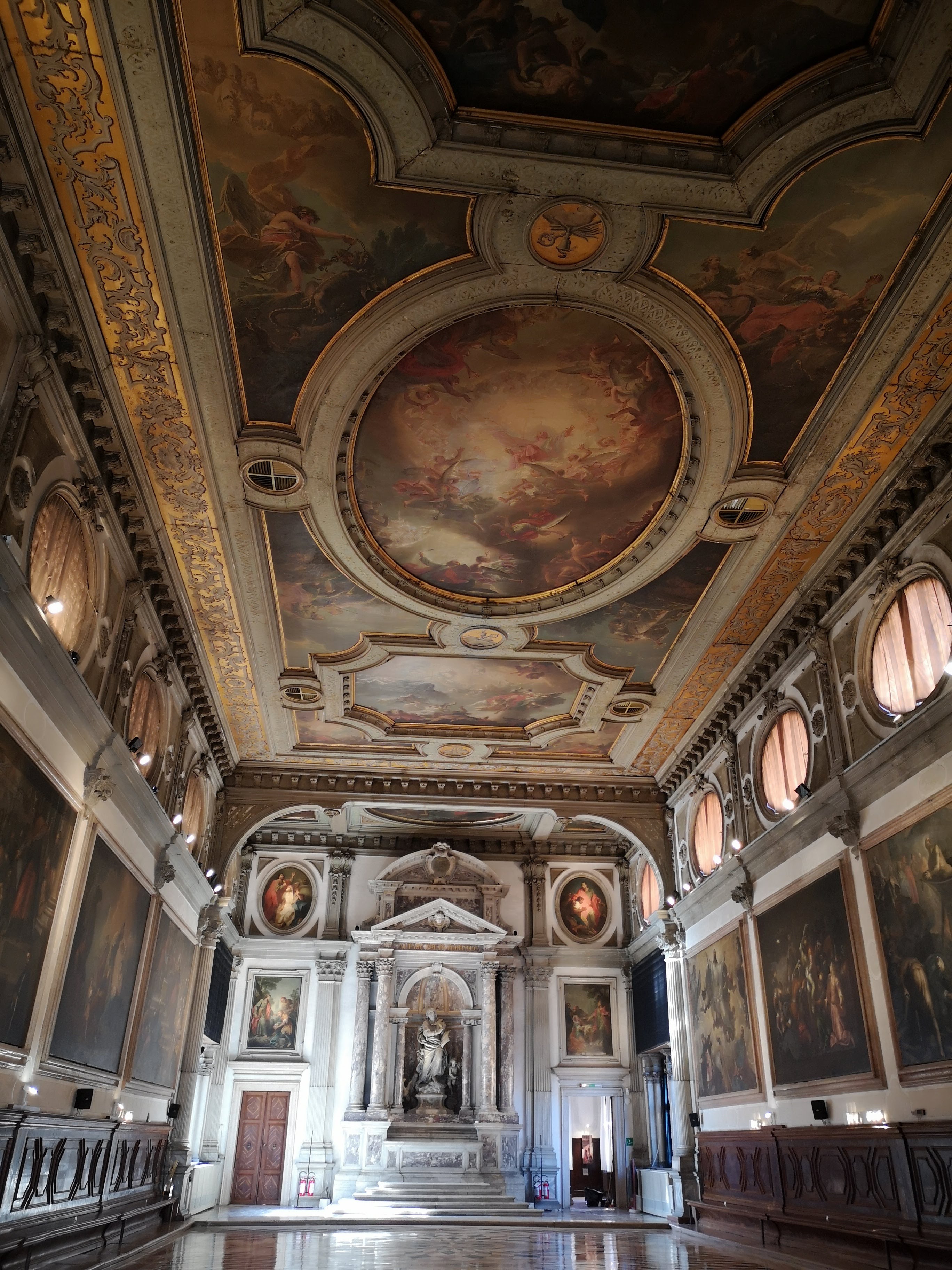 Sala Capitolare or Hall of St. John or Chapter Room

From the elegant monumental staircase you have access to the main environment of the Scuola Grande. An extraordinary and prestigious setting by Giorgio Massari who between 1727 and 1762 made important contributions to the previous fifteenth-century hall. 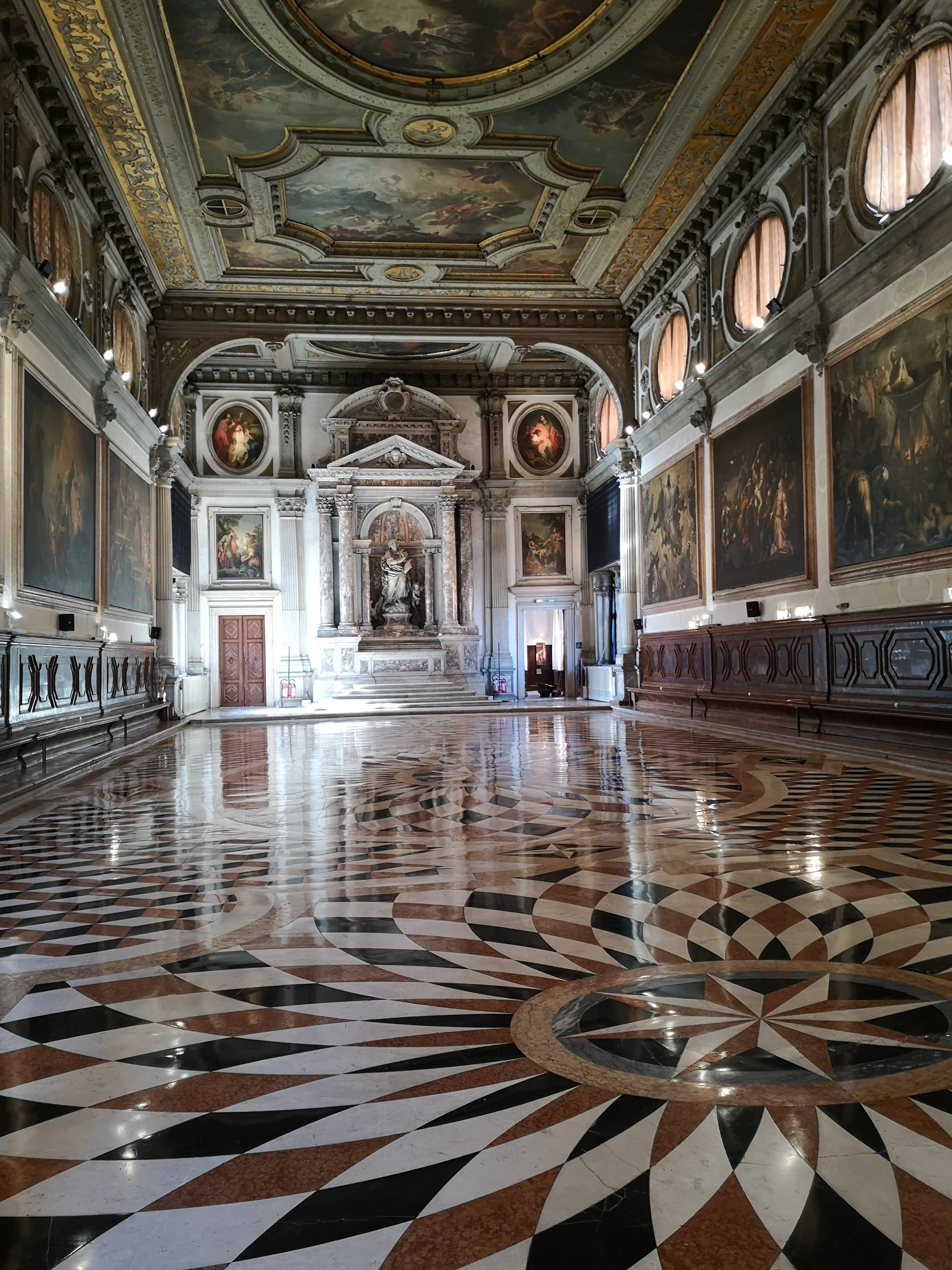 The room is lit by 12 oval windows and in addition to being of considerable size, 11 meters in height, it presents a series of paintings on the walls that tell episodes of the life of St. John the Evangelist and on the ceiling scenes of the book of the Apocalypse. The altar, on the back wall, with the statue of the Saint in the act of writing his Gospel and the extraordinary nature of the floor, the shapes and the color of the marbles, make this room an absolute masterpiece that will leave you breathless. 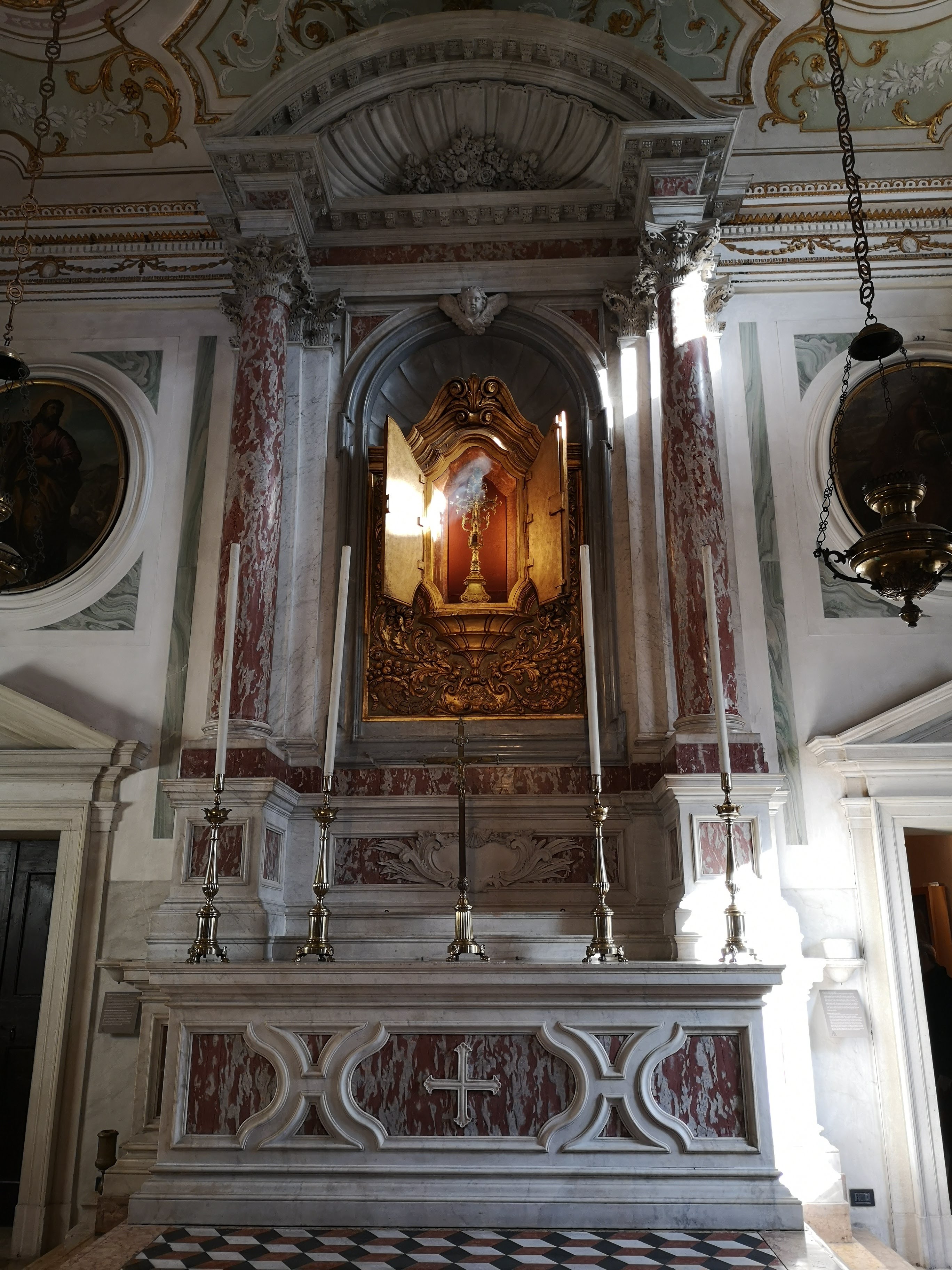 Oratory of the Cross

Here is stored on the altar the precious relic donated by the chancellor of the kingdoms of Cyprus and Jerusalem, Philippe de Mezières, to the Scuola Grande in 1369.

In the reliquary placed on the top of the relic, there are some fragments of the cross on which Jesus died. On September 14 of each year there is the Feast of the Exaltation of the Cross, a celebration with a solemnized procession, of great value for the school. 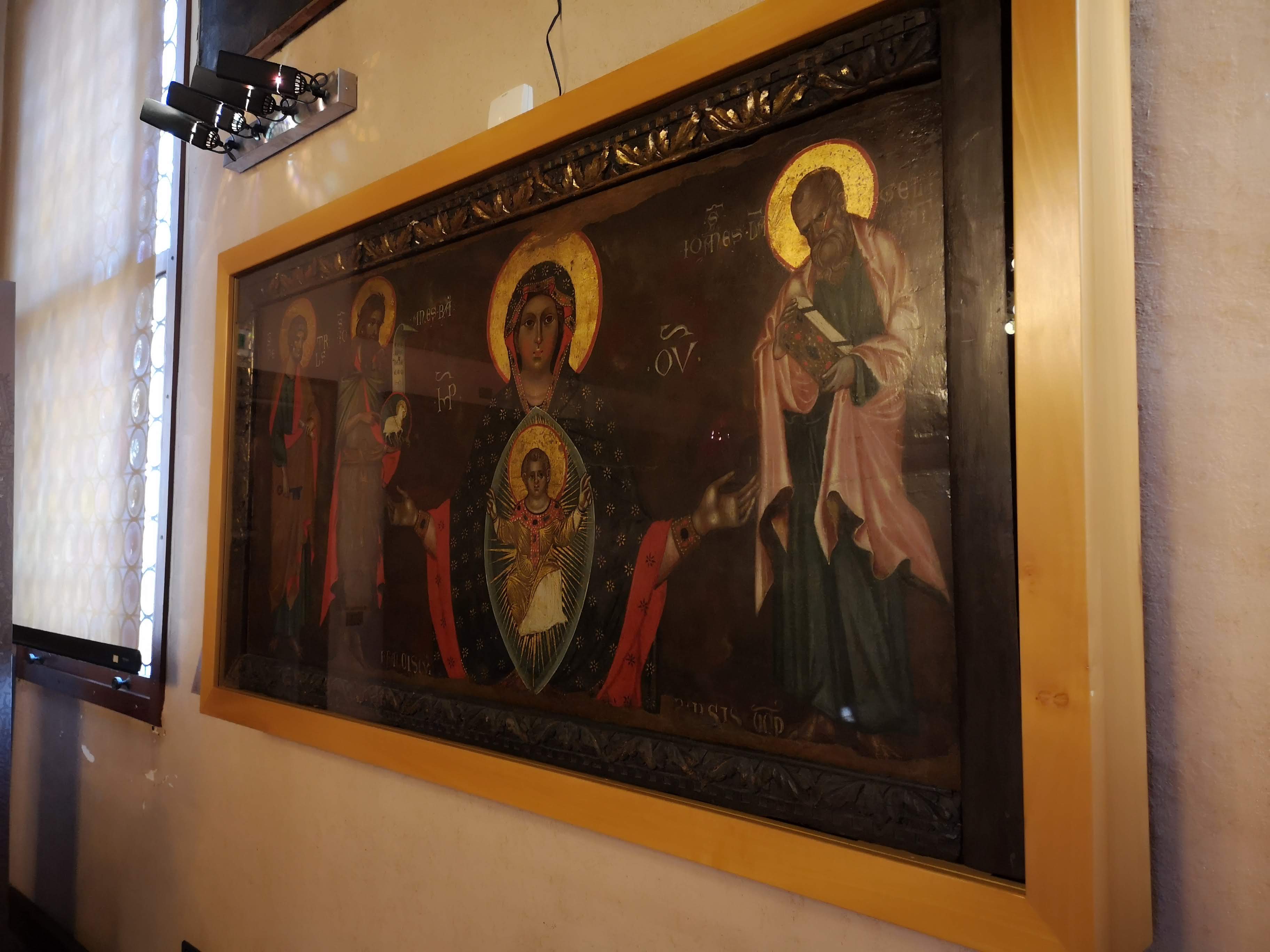 The place where the meetings of the governing bodies of the School were held. Between 1496 and 1501 some of the leading painters in Venice were called to create a series of canvases to decorate the Albergo to celebrate the Miracles of the Cross.

Gentile Bellini painted three canvases, two Giovanni Mansueti, one Vittore Carpaccio, one Lazzaro Bastiani and one Benedetto Diana; a ninth, a work by Perugino, has not been preserved. The whole cycle can now be admired at the Gallerie dell’Accademia.

In the 1500s also Titian intervened, painting the Vision of St. John the Evangelist for the ceiling of the Sala dell’Albergo, now at the National Gallery in London. 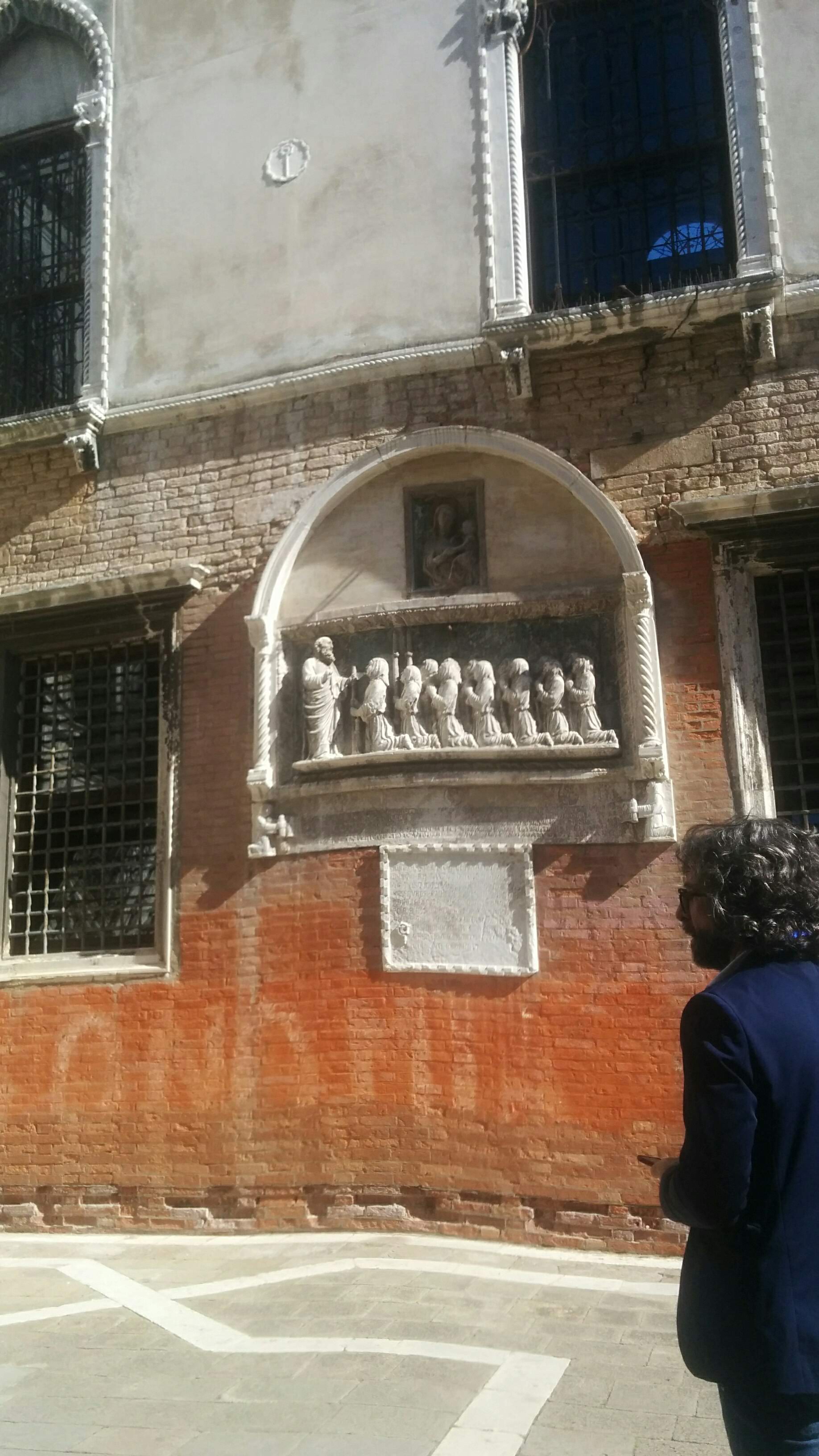 Nowadays the Scuola Grande San Giovanni Evangelista in Venice is a unique place of its kind.

Ideal to host congresses, major events but also exhibitions and gala evenings, the location can give prestige and magic to every event organized here.

Divided between small conference rooms, large halls, a church and an exhibition space, the structure is located on a space of over 2,000 square meters, spaces all characterized by frescoes or fine finishes. It also has spaces suitable for catering.

The Scuola Grande San Giovanni Evangelista Museum is open to the public on days when the usual congress activities are not carried out.

To check on the opening times, simply go and visit their website-  you can book a guided tour too.

Thank you again Raffaele and Jelena for the wonderful and instructive visit…I will be back for sure!

A romantic dip in the past in Venice

A small jewel of medieval art: the Abbey of Pomposa