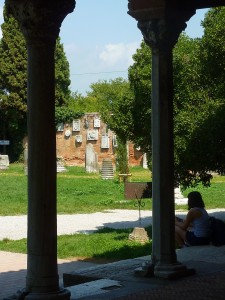 The island of Torcello

Torcello: a place of worship and highly spiritual, the Basilica of Santa Maria Assunta is located on the fascinating Torcello Island, one of the oldest settlements in the Venice lagoon and the cradle of Venice itself.

The origins of this ancient church date back to the distant 7th century, built on behalf of the Ravenna Exarch following the transferral of the episcopal seat of Altino to Torcello, to escape the Lombard invasions on the mainland.

Dedicated to Mary, Mother of Jesus, the atmosphere of cathedral is poised between art and spirituality  a multifaceted place where every detail is an artistic masterpiece in itself, from the way the light illuminates the inside to the splendid marble columns and the floor adorned with multi-coloured segments artistically etched to create intricate designs and stunning intersections. Not forgetting the mosaics, with their strong Byzantine influence, considered one of the best mosaics in Northern Italy.

After being expanded for the first time in 826 A.D. and rebuilt in 1008, when it was finally consecrated to Santa Maria Assunta, the Torcello Basilica anticipates some of the characteristics that were fully developed at a later stage inside the best known building in Venice – St Marks Cathedral.

Parallel to the development of the episcopal seat, the island enjoyed a period of splendour becoming one of the major centres in the lagoon until the arrival of the plague and expanding swamps forced its inhabitants to flee to the city of Venice. Despite the state of neglect affecting Torcello starting from the 14th century, Santa Maria Assunta retained its function as a cathedral until 1818, when it was downgraded to a parish church under the Venice Patriarch.

The basilica is part of a vast religious area including also the Church of Santa Fosca, the baptistery dedicated to St John (whose foundations are the only remains) and the soaring bell tower that can be seen from a great distance across the lagoon, lying in untouched nature and a tranquil atmosphere looking almost surreal! 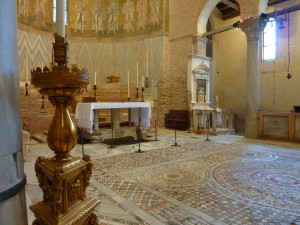 Interior of the Basilica

The Basilica of Santa Maria Assunta represents a significant example of Venetian byzantine style – a building with a basilica design divided by Greek marble columns  – with beautifully decorated capitals  in three naves: a very high central one and two smaller lateral ones.

The church houses some true masterpieces, including mosaics, architectural elements and sacred decorations.

Before attempting to describe in words the enchanting mosaics, we would like to highlight a few elements that deserve a short description: the iconostasis dividing the nave from the baptistery, decorated with stunning paintings on a gold backdrop depicting the Madonna and the Disciples; the four balustrades encircling the presbytery, with complicated representations in balance between traditional Christian symbology and alchemical meanings; the major altar, containing the remains of St Eliodoro, the first bishop of Altino; and finally a stone inscription, located to the left of the altar, considered the first documentation of the history of Venice.

The main subject of the decorations of the Torcello Cathedral is the Virgin Mary, who welcomes visitors from the top on entering the cathedral, in an extraordinary mosaic on a golden background located in the bowl of the main apse. The Virgin Mary is wrapped in precious garments and is holding Jesus in her arms, whilst on a lower level are the Apostles, depicted in front position and identified by inscriptions.

The most important mosaic of the Cathedral of Santa Maria Assunta is the Last Judgement, an impressive representation built between the 12th and 13th centuries and occupying the entire counter façade of the church. 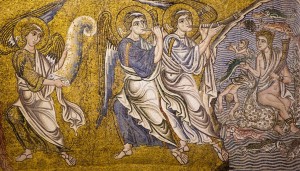 This mosaic can be compared to a page from the Apocalypses: from the crucifixion between the Virgin Mary and St John to the ascent of the Limbo, where Christ frees and judges the souls of humans sitting amongst the Virgin Mary, St John and the Saints. On the lower levels is a depiction of the separation of the blessed from the damned: the latter are inflicted the punishments of the law of retaliation due to their capital vices. There are stunning analogies with the Divine Comedy, had it not been the case that Dante wrote his oeuvre around a century after the completion of this sumptuous masterpiece.

To fully appreciate the many facets of this incredible church, Veneto Inside offers the fascinating tour The Torcello Basilica and its Secret Itineraries, which includes a visit to two areas which were previously inaccessible: the crypt and sacristy.

The crypt is a passage underneath the altar from where it is possible to admire the ancient brickwork of the mediaeval basilica, whilst the sacristy enshrines the ancient porch of Santa Maria Assunta, which was closed off at later stage to create a fourth nave. In the sacristy it is possible to admire several stone elements dating back to the 9th century and a mysterious Roman sarcophagus, hidden behind a secret passageway which the legend claims it housed, for some time, the body of Mark the Evangelist.

Let the magic of this ancient Basilica enchant you! A tranquil place immersed in nature to be enjoyed and to let oneself be permeated by the peace and mystery of the Island of Torcello.

Veneto Inside: all the information to discover Veneto and Venice as an insider and book online tours, taxis, transfers, hotels and Skip the Line at St.Mark’s Basilica

Hot to get to Torcello: Torcello is easily accessible from Burano. There are several links by ACTV vaporetto during the day by vaporetto (line T). From the point of embarkation of Buranot here are fixed departures every thirty minutes, crossing the channel of the Burgundians, arriving in Torcello in minutes.