Venice Carnival and the Theatre

Venice Carnival and the Theatre: You cannot mention the Carnival of Venice without talking about all the shows and the theatres.

The theatre season in Venice was the richest in Europe, thanks to the many theatres in town, often owned by noble families.

Venice was one of the few cities in Europe to own a substantial number of the theatres: S. Salvador (now known as Goldoni Theatre), S. Cassiano, S. Angelo, S. Moses.

To these we have to add three other privately owned theatres: S. John Chrysostom (today Malibran Theatre), San Samuel and finally the S. Benedict, who after being destroyed by a fire and after some legal wrangling was reborn under a new form, the Teatro La Fenice.

In Venice, in the seventeenth century, was introduced for the first time the opera music in public theatres, allowing for a wide audience to enjoy what until then had been a privilege for the few. The season opened on October 1st, coinciding with the authorization to wear masks.

In the plays of Carlo Goldoni, Carnival is mentioned so often, so much so that his plays have become an important source of documentation. His works were shown during the carnival season. The Carnival is in fact mentioned in some of his most famous comedies, like La vedova scaltra “The Shrewd Widow”,I morbinosi, I rusteghi. Goldoni did not certainly have a benevolent attitude to the luxury and ostentation of the Carnival, and suggested, with his plays, a type of simple and fun park. 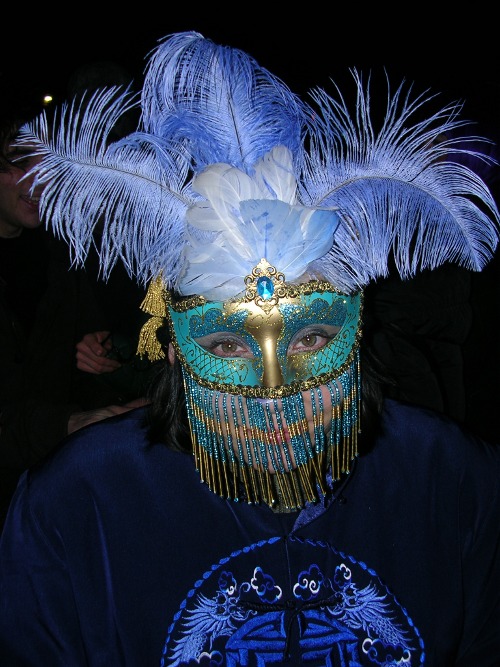 The Carnival had a time of stagnation after the collapse of the Republic of Venice because the city disliked the temporary occupation of Austria and France. The tradition was preserved in the islands, Burano, Murano, where they continued to celebrate. Only at the end of the seventies of the twentieth century, some citizens and civic associations pledged to resurrect the carnival which was inaugurated in 1979. The city of Venice, the Teatro La Fenice and the Biennale prepared a program of 11 days but leaving too much room for improvisation and spontaneity not to mention logistical support, without restaurants and accommodations at affordable prices.
There wasn’t, in the first edition, a detailed strategy. But it was the first time that the magic of Venice opened to spontaneous celebration, a good-natured sort of collective madness. Only a few guidelines, one above all: the “Carnival of the Theatre“, invented by the Biennale, directed by Maurizio Scaparro, which he built in the Basin of San Marco, in front of the Punta della Dogana, the wonderful World Theatre of Aldo Rossi.
It was a success, with six thousand visitors attending in only a few days, dancing in the streets in the name of madness but also of joy.
And a year later this was replicated with a special reception and a title even more paradoxical, yet designed by the Biennale Theatre: “Carnival of Reason”, with 300 shows, almost all shown for the very first time.

1982 brings a new feature of the Carnival in Venice: the twinning with the city of Naples where Pulcinella meets Harlequin. The invasion in those days of men dressed all in white with a black mask was massive and it also involved the mainland.
In the following year some other themes with a strong international and cultural influence were created, including Venice and foreigners “(1984),” Paris in Venice “(1985),” Masks of Europe and the Orient “(1988).

In the late ’80s other themes were developed: hey range from the Carnival of Fantasy (1989) and East and Chinoiserie (1994).

The last Venetian Carnival of the millennium, in 1999, was celebrated by walking through, step by step, the many religious and secular celebrations of the city of the Doges. 999 years of parties and Carnivals in Venice was the title of the exhibition, which returned to the collaboration of the Biennale with the Theatre..

Carnival today is the result of evolution and integration of many events and historical events over the centuries.

This year theme is the Unity of Italy and and an Homage to Women.

It will be just great!

Find the time to be friends, it is the path to hap

“What sunshine is to flowers, smiles are to huma

Cicchetti: old and new! Traditional and modern: I

Veniceland... The Land if Tiepolo Mirano A nice da

This morning I told you to believe in your dreams

Good morning - believe in your dreams, big or smal

Water in the boat is the ruin of the boat, but wat

"The bad news is time flies. The good news is you'

"It's never too late to be what you might have bee