THE FLIGHT OF THE ANGEL

Starts at 11.00 in Saint Marks Square 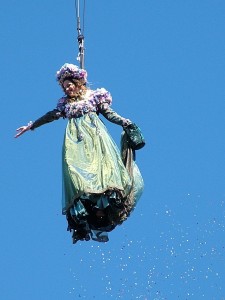 HISTORY OF THE EVENT THE FLIGHT OF THE ANGEL:The Carnival 2001 marked a return to the tradition of eighteenth-century carnivals re-staging, after centuries, the Angel’s Flight, as it used to be at the times of the Republic of the Serenissima.

From that year, the event symbol of Carnival, the flight from the bell tower of San Marco to the Palace of the Doges, has returned to be performed by an “angel” in the flesh, replacing the more recent Columbine “puppet”. Up to 2001, for many years, the flight had been transformed into that of a puppet dressed as an angel or a columbine. 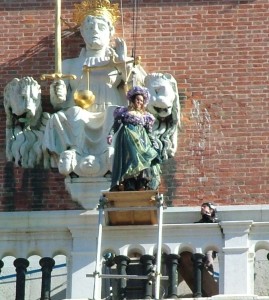 In 2001 the first Carnival of the millennium, the famous Flight of the Dove from the bell tower of San Marco was brought back back, as a real show, to the origins of the celebration of Fat Thursday with a new angel coming down from the bell tower of San Marco down to the loggia of the Palazzo Ducale, enacting the ancient rite of homaging the doge with a sceptre that proclaims the start of the Carnival in a riot of confetti and balloons.

Since Carnival has come back into vogue, the flight of the Dove or better of the Angel no longer takes place on Shrove Tuesday but the previous weekend and marks the beginning of the carnival festivities in the city together with the Festa delle Marie the day before.

Called the Flight of the Turk for a period

Popular tradition has it that the first foreigner who had the honour to give to this event if not his name at least that of his nationality, seems to have been a Turkish man (hence the initial name The Flight of the Turk).

In an edition of the Carnival in mid-1500, between the various events and shows in the city, an extraordinary event took place which caused a major sensation: a young Turkish acrobat succeeded, only using a balancer, to get to the belfry of the Campanile of San Marco walking on a long rope, in the din of the crowd who was in a frenzy below, from a boat docked on the pier of the Piazzetta.

On the descent, however, he reached the balcony of the Palazzo Ducale, handing gifts to the Doge. Years later  a winged man … … he was tied to certain rings and strung on a rope … he did ascend and fall with great speed and ease as if he used his wings …” and this became the Flight of the Angel. 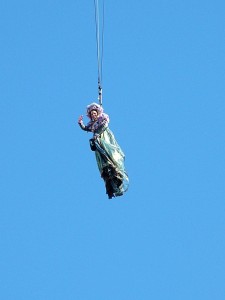 The Venetian Chronicles collected many examples of daring exploits of these acrobats – typically Venetian artisans – who competed in this test of courage at times risking their lives. Famous among these is Santo di Ca Lezze that, in 1680, as Ivanovich tells in his Minerva at the table (Venice 1681) he did a marvellous climb on a live horse, thanks to some ropes from the channel to the tower and entering into the Campanile with the horse or in 1681 attracted the curiosity bringing in a fisoliera by ropes from the canal to the Campanile, with his oar in hand with the motion of a continuous fashion. ” In 1759, at some point the show ended in tragedy, the acrobat crashed into the horrified crowd. Probably because of this serious incident, the event, held in this way,was prohibited.

Since then the program took place replacing the acrobat with a large wooden dove that on its way, always starting from the bell tower, threw flowers and confetti on the crowd. From the first of these editions, the name of Angel Flight changed to Flight of the Dove. This event, like most of other Carnival events and shows,was interrupted for an extended period, with the end of the thousand-year history of the Serenissima.

This year for Carnival of 2011,the Flight of the Angel returns to the origins, proposing an Angel in flesh and blood, which, coming down from the bell tower of San Marco to the loggia of the Palazzo Ducale, will stage the ancient rite paying homage to the doge with a sceptre that will proclaim the beginning of Carnival. The show, during which a girl dressed as an angel falls from the tower, offers the exciting flight of a secret guest of the city of Venice, usually a glamorous star of the international scene wearing a beautiful costume with a Carnival theme.

So if you are going to be her during the Carnival, make sure you not to miss it

Traditional Food in Venice: Tale of a Venetian Frittelle Marathon!