THE QUEENS OF BEADS: THE IMPIRARESSE OF VENICE 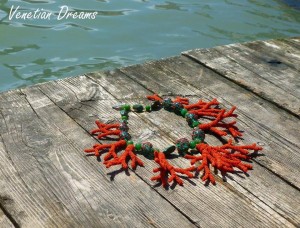 All over the world the glass which is produced in Murano is renowned for its quality and design, and this goes also for the Murano glass beads which are used as applications to embellish elaborate dresses and clothing creations from the best fashion designers.

But have you ever wondered how these tiny Venice Murano Glass seed beads were actually sold all over the world?

A few weeks ago I went to find out in Marisa Convento‘s lovely little shop, Venetian Dreams, in Calle della Mandola, 10 minutes walk from Saint Mark’s Square. We had been friends for a while on Facebook, but even though we live only a few km apart, we had never actually met before!
So it was a real pleasure for me to finally meet for real a person whom I have come to admire, both for her hard work and her love for Venice.

And it was also a real surprise (and pleasure) for me when Marisa took some time off her very (believe me, very) busy schedule (preparing her creations and also dealing with the endless stream of clients walking into her beautiful shop) to tell me the story of some of the women from Venice, which has shaped the history of the city and which I knew very little about.

Since 2013 Marisa has been the vice-president of the Comitato per la Tutela Storica e Culturale delle Perle di Vetro Veneziane (CPVV), that is the Committee for the Protection of Historical and Cultural Venetian Glass Beads, that has as its purpose the preservation of the knowledge on how to make beads as on the List of Intangible Heritage of Humanity in accordance with the UNESCO Convention (Paris, 2003).

This is the tale of the Impiraresse, a story which I found really fascinating:

The impiraresse, the ladies who inserted the tiny little Venetian beads into threads which were then sold worldwide, worked from home for the conterie, the glass bead factories of Murano.

A job that consisted in inserting small glass beads on special cotton, to be used in clothing (embroidery and necklaces), or on metal wires, to create decorative objects.

A job that required patience and skill and who was also one of the least paid activities, with an exploitation of cheap labour beginning at the age of eight and continuing until late in life. – Le Impiraresse, Luisa Ronchini 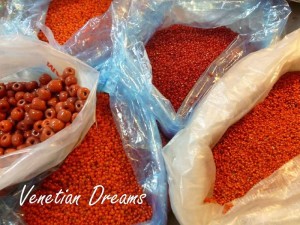 The word comes from the verb “impirar”, which means “to thread” in Venetian dialect. In fact, these women threaded the glass beads produced in the furnaces of Murano all day long, sitting in small groups in front of their homes especially in the summer.

The impiraresse worked scattered throughout the city, but it was easier to see them in the popular district of Castello, one of the six areas into which the city of Venice is divided into.

The Venice Murano Glass factories needed the impiraresse to thread the beads so it would be much easier and more effective for them to send the beads all over the world (a weighing scale was not needed to measure the exact quantities of beads and the beads were stored easily, limiting the amount which could be lost).

From the 15th century or possibly earlier, until the first half of the twentieth century, this activity gave work to thousands of women in Venice.

Positioned just outside their homes, to make the most of the sunlight (there was no electricity around in those days and it was an impossible job to be carried out at candlelight), each impiraressa would be sitting on a low chair to allow her knees to stand at the right angle.

Then she would hold on her knees a wooden tray full of beads in which she would sank in, quickly and with a regular rhythm, a range of long needles consisting of 40 to 60 of them, from which branched long linen threads.

She would fill the full length of the needle, which is called agada, and string the beads on the needle in a continuous piling movement. Some of the most talented and experienced impiraresse will use 80 needles at one time, opening them in their hands like a fan, which they called in Venetian la sventola. Once the full length of the needle was full, the impiraressa will pull it down on a thread and carry on with a continuous movement. 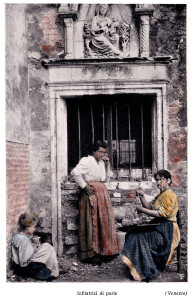 The tray had to be always full, to allow the impiraresse to work fast. The more they strung the more they earned.

They had to check their work all the time because it is very easy to put one bead in two threads. The women worked under the rules and coordination of the Mistra, the head of the impiraresse, which was also the intermediary between the workers and the company selling the beads.

The company will give up to 100 kilos of beads to the Mistra, who then distributed them to a trusty group of impiraperle; the work performed by each, and commissioned in wireless fixed length, joined at the head, was carefully weighed before and after by the mistra.

It was a job which required passion but paid next to nothing; it was a woman job which allowed Venetian women to bring home some money but at the same time to take care of the family and the house. One of the first women working unions born in Italy was the one belonging to the impiraresse.

At the end of the 19th century Venice was already fighting the competition from other countries with regards to the production and sale of beads and pearls. In particular against France which was producing much cheaper seed beads and thus creating a big competition with Venice.

So much so that during the Victorian times the famous black bead maccà was sold at a much lower price than its actual cost, causing the poor impiraresse to be paid virtually nothing.

This is a song which would be sung by all the impiraresse.

Marisa herself is an “Impiraressa”. She is specialized in the processing of flowers and “coral branches” which she creates with original Murano glass beads. 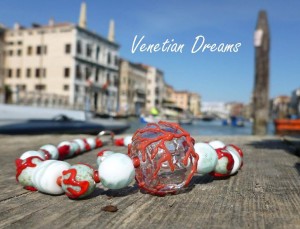 Marisa says:  I love the glass and my city: Venice. Creating jewellery with the most beautiful Venetian glass beads of Murano glass is the way I respect the culture and history of my city, those who choose Venetian Dreams choose to support our craft traditions and the most authentic Venetian culture!

You can visit Marisa Convento in her amazing shop Venetian Dreams and see some of her fantastic skilled work  and I am pretty sure she will also take some time to tell your the amazing story of the Queens of Beads!

Or you can watch the interview she gave me:

WATER TAXI RIDE IN VENICE - JUST LIKE A V.I.P.