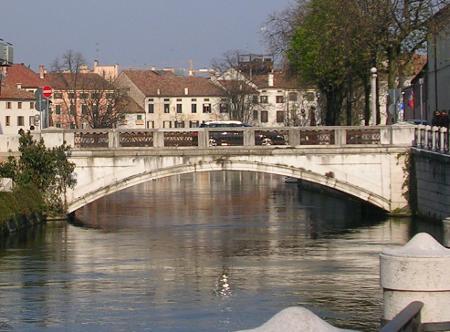 Last Sunday I decided to take some friends of ours, who were here for a short weekend break, to visit other parts of Veneto Region, aside from Venice.

Veneto is not only Venice and I am always very proud to show friends areas where tourists are scarce and where you can see how Italians really live.

I decided to go to Treviso (since their plane was leaving from the adjacent airport).

Treviso is the chief town of the province of Treviso, one of the seven provinces of Veneto Region and it counts around 82.000 inhabitants.

Treviso is surrounded by waterways and it lingers in a tranquil atmosphere miles apart from the chaotic tourist streets of its neighbour Venice. But even though it is not as famous, Treviso is a pleasant town with several attractions worthy of a day trip. 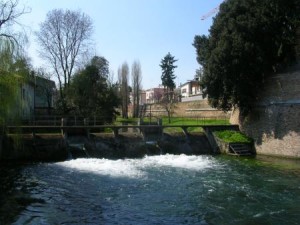 The river Sile in Treviso, Italy

It is located at the meeting point between the Botteniga river with the Sile river, 30 km north of Venice. The city is situated some 15 km south-west of the right bank of the Piave River, on the plain between the Gulf of Venice and the Alps.

The legend says that the city takes its name from the ancient city of Tarvisium, which in turn took its name from a settlement of the Celtic tribe of the Taurusci.

Tarvisium, a city populated by the Veneti, became part of the Roman empire in 89 BC after the Romans conquered the Cisalpine Gaul.

The city is situated near the Via Postumia, which connected Opitergium to Aquileia, two major cities of Roman Venetia during Ancient and Early Medieval times.

During the Roman Period, Christianity soon spread to Treviso and already in 396 Ad the city had its own resident bishop, whose name was. John the Pius . 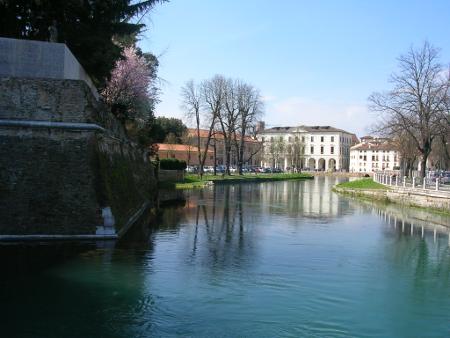 During the middle ages, Treviso found itself in the path of barbarians invading Italy however, it was spared by Attila the Hun remained an important centre during the 6th century.

Legends say that Treviso was the birthplace of Totila, the leader of Ostrogoths during the Gothic Wars.

Immediately after the Gothic Wars, Treviso fell under the Byzantine Exarchate of Ravenna until 568 AD when it was taken by the Lombard. People from the city also played a role in the founding of Venice.

As Wikipedia reports: ” Charlemagne made it the capital of a border March, i.e., the Marca Trevigiana, which lasted for several centuries (the name is still used today to indicated the province of Treviso)

Treviso joined the Lombard League, and gained independence after the Peace of Constance (1183). This lasted until the times when seignories started to impose in northern Italy: among the various families who ruled over Treviso, the Da Romano reigned from 1237 to 1260.

Struggles between Guelph and Ghibelline factions followed, with the first triumphant in 1283 with Gherardo III da Camino, date after which Treviso lived a significant economical reprise which lasted until 1312. Treviso and her satellite cities, including Castelfranco Veneto, founded by the Trevigiani in opposition to Padua, had become appetible for the neighbouring powers, including the da Carrara and Scaligeri.

After the fall of the last Caminesi lord, Rizzardo IV, the Marca was the site of continuous struggles and ravages (13291388). 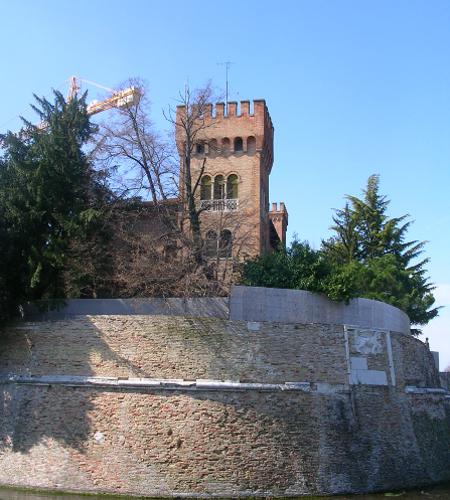 After a Scaliger domination the city gave itself to the Republic of Venice, becoming the first notable mainland possession of the Serenissima. From 1318 it was also, for a short time, the seat of a university. Venetian rule brought innumerable benefits, however, Treviso necessarily became involved in the wars of Venice.

From 1381-1384, the city was captured and ruled by the duke of Austria, and then by the Carraresi until 1388. Having returned to Venice, the city was fortified and given a massive line of (still existent) walls and ramparts: these were renewed in the following century under the direction of Fra Giocondo, two of the gates being built by the Lombardi. The many waterways were exploited with several waterwheels which mainly powered mills for milling grain produced locally. 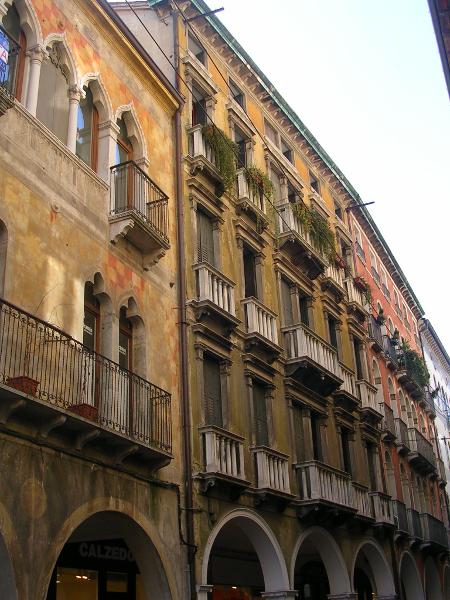 The waterways were all navigable and “barconi” would arrive from Venice at the Port of Treviso (Porto de Fiera) pay duty and offload their merchandise and passengers along Riviera Santa Margherita. Fishermen were able to bring fresh catch every day to the Treviso fish market, which is held still today on an island connected to the rest of the city by two small bridges at either end.

In 1797, like Venice, Napoleon took the city over and placed one of his general, Mortier, as duke of the city. After the defeat of the French, Treviso passed to the Austro-Hungarian Empire.

But the Trevisan citizens, still deeply loyal to the fallen Venetian Republic, could not stand the Austrian rule and in March 1848, the fought and drove out the Austrian garrison. Unfortunately the town was bombarded and it capitulated in the following June. The Austrians continued to rule until Treviso was annexed to the Kingdom of Italy in 1866. 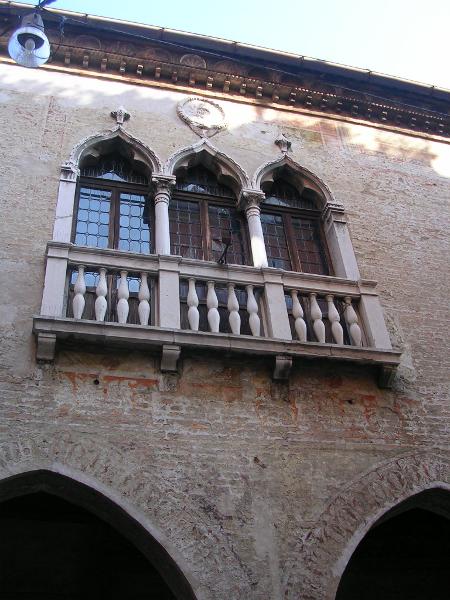 During the Second World War, an Italian concentration camp was located in the outskirts of the city and it was mainly used to imprison members of the Yugoslav resistance movement. The camp was destroyed in 1943. At the end of the Second World War, Treviso suffered an Allied bombing on 7th April 1944. Over 7,000 dies and many parts of the city were destroyed, including a part of Palazzo dei Trecento.

We arrived in the early part of the afternoon and after parking our car in the south-east part of the city, we walked up to the city walls. We immediately saw the beautiful rivers which surround the city and decided to take a walk inside the walls.

It was a perfect Spring day and at first there was no one walking around, apart us. But as we ventured along the narrow medieval streets, we started to see more and more residents coming out.

The river Sile runs to the south of the centre, and many canals carry water around the town, all around there are medieval style houses or grassy banks, weeping willows, waterwheels and little parks. The town’s defensive walls, moat and imposing gateways are still impressive sights. 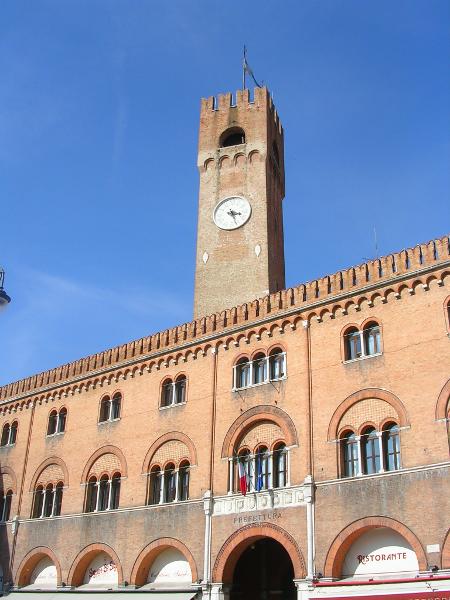 Very strangely for the North East of Italy, the shops were all open even though it was a Sunday and the city started to buzz with local residents just coming out to enjoy the sun, taking a nice passeggiata and eating a little ice-cream or drinking a quiet drink.

We made our way to the Piazza dei Signori ( Lords’ Square), a pleasant square with a street running along one side and cafés with outdoor tables along the other. The dominant building here is the historic town hall, the Palazzo dei Trecento.

We strolled under the porticoes full of all kind of shops, for the exception of souvenir shops. Treviso’s smartest shopping street, Via Calmaggiore, stretches from Piazza dei Signori towards the Duomo, between the lengthy rows of arches which characterise Treviso’s arcaded streets.

We then headed to the The Duomo (Cathedral), which is dedicated to St. Peter. This used to be a a small church built in the Late Roman era. After the numerous later restorations, only the gate remains of the original Roman edifice.

The interior houses works by Il Pordenone and Titian among others. We sat down just opposite the Duomo for a nice coffee in a lovely and not at all expensive coffee bar. We just sat there leisurely enjoying the lovely Spring weather, checking out the local people passing by. 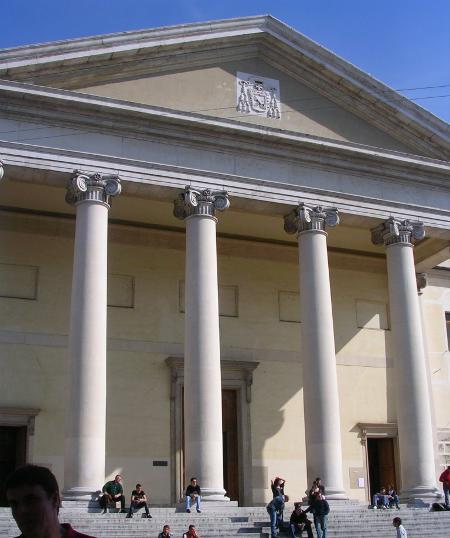 Then we decided to head to another part of the city and we walked to the The Loggia dei Cavalieri, an example of Treviso’s Romanesque influenced by Byzantine forms. This was built under the Andrea da Perugia (1276) as a place for meetings, talks and games. Looking up, you’ll see many fragments of painted frescoes which once decorated Treviso’s houses. 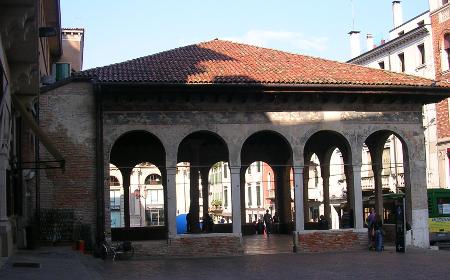 The centre of Treviso is only 5-10 minutes on foot from the railway station. Leaving the station, follow the signs to the centro and this will take you to the heart of the city.

Other important sites which are worth seeing (even though we did not have the time to do it) are:

Museo di Santa Caterina, a former church and convent which has recently been restructured to house the Civic Museum, the town’s art gallery and archaeological collection. The museum is in Piazzetta Botter. It’s open from Tuesday to Sunday 9am-12:30 and 2:30-6pm.

Chiesa di San Francesco is a cool high brick structure with a massive ship’s keel roof. In a chapel off the transept to the left of the main altar is a fresco by Tomaso da Modena of an enthroned Madonna with attendant saints – some of the colour has been lost but his faces retain their sweetness. 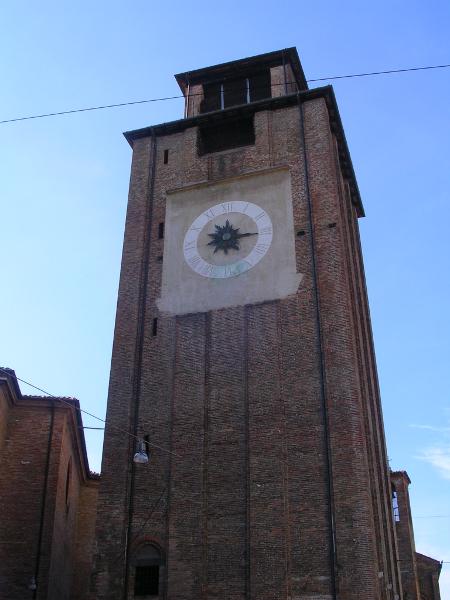 Chiesa di San Nicolò, a fine example of Italian Gothic architecture which looks as though it has been stretched upwards to the heavens. Tomaso da Modena left his mark here too, contributing a San Gerolamo to the prettily-decorated columns inside the church.

For a quick lunch, just step in any of the various coffee bars and order yourself a Tostone (that is a big ham and cheese toasted bread sandwich) and a nice glass of Prosecco wine (the typical wine of this area), a quick and cheap alternative. Or just take a walk on the city ramparts, dotted with benches and have a lovely pick nick.

In Treviso there is a small international airport Aeroporto A.Canova, which is served mainly by Ryanair with budget flights from all of Europe. A bus run by local firm ACTT (number 6) stops just outside the airport and runs to Treviso railway station. 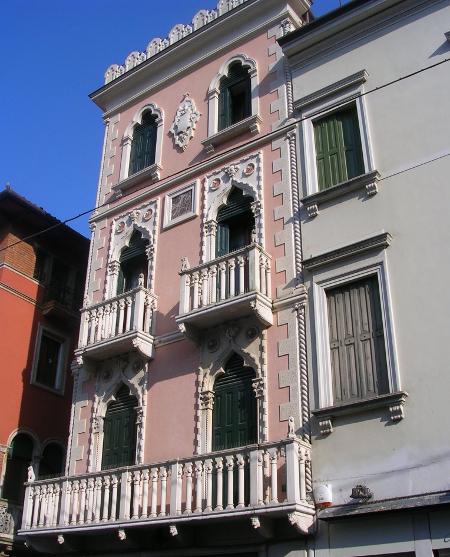 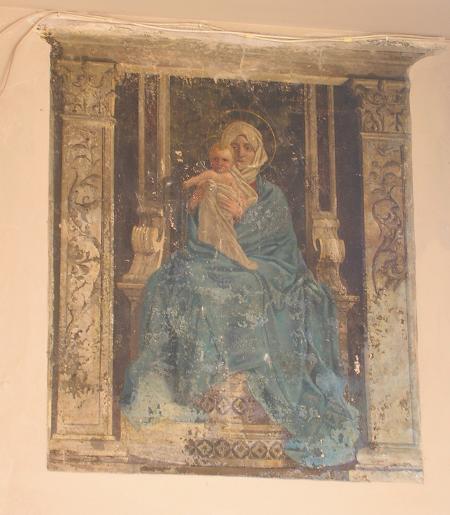 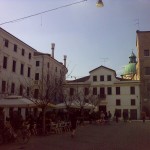 Treviso has frequent rail and coach connections from Venice. The train is faster, taking half an hour from Venice’s Santa Lucia station. Bus services between Venice and Treviso are run by ATVO and are connected to the flight schedule. The journey can take up to an hour (depending on traffic)and the bus will drop you off in Mestre Train Station or Venice Piazzale Roma.

The wind is blowing in another Best memory of Venice (#4)

Venice in The Fog in December