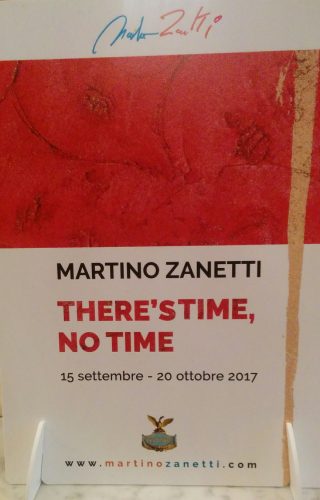 A few days ago I was invited to attend to a very particular Aperitif Event at the Teatro la Fenice in Venice: Upstairs – Tasting & Colours in Venice.

As the press release quoted:

A sensory experience that intends to give emotions through different and complementary perceptual channels: great brands like Hausbrandt, Theresianer and Tenuta Col Sandago – Case Bianche dialogue with the incredible shades of colors and works of the exhibition “There’s time, no time” by Martino Zanetti.

Upstairs – Tasting & Colours in Venice was born as a gustatory route that aims to stimulate the present, thanks to an explorative journey through the senses, in an extraordinary location, such as the Apollonian Rooms of the La Fenice Theater in Venice – a symbol city and historically crossroads of cultures, trends, religions, artistic and political passions -. A unique and magical city, which is also the home of the Zanetti Family.

In the Dante room, the aromas of a special Hausbrandt coffee, featured in the sparkling nuances of its 100% Arabica Gourmet Mix, delighted the guests. 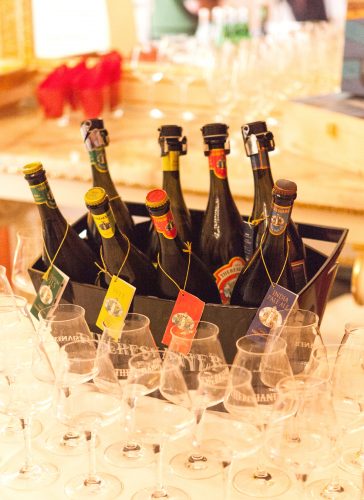 The unmistakable delight of non filtered Theresianer Beers like the Premium Pils, Wit, India Pale Ale and Bock wrapped the guests in the Verdi Hall to continue the journey to the Sinopoli Hall where the elegant personality of Conegliano Valdobbiadene Tenuta Col Sandago was presented in three different expressions: balanced and structured Vogna del Cuc, cosmopolitan and unique Extra Dry and the elegant Undici. 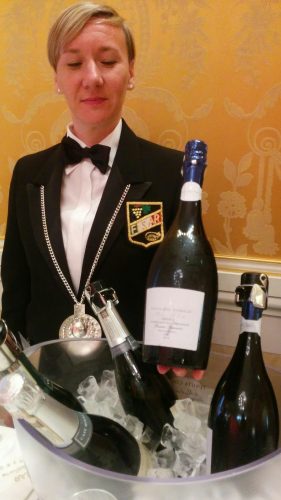 In the Ammanati room, attention was focused on the intense spirit of Wildbacher in the traditional version, Brut Rosè and Classic Method. 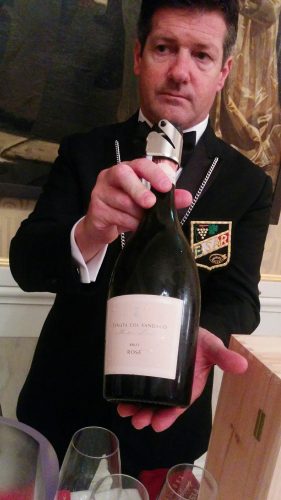 Upstairs is a multisensory journey and an exciting exploration that stimulates and inspires through the exquisite taste of Hausbrandt, Theresianer and Tenuta Col Sandago – Case Bianche, here combined with the chromatic facets of the canvases of Martino Zanetti.

So there I was, together with a small group of journalists, writers and bloggers, wandering around the amazing rooms of the Fenice, tasting some good finger food and sampling some amazing wine and beers. 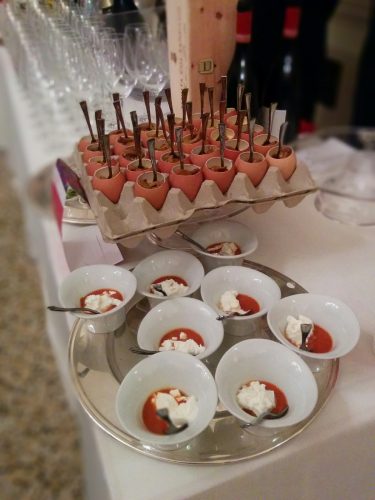 My favourite wine was for sure the Wildbacher in the Brut Rosè version and as far as for the beer I totally fell in love with the Wit, with its flavourful refreshing fruity aroma. 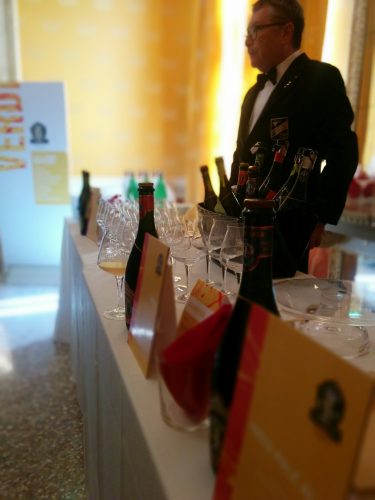 But the highlight of the event was to be able to meet and have a quick chat and interview with Mr Martino Zanetti, the artist of “There’s time, no time”, the exhibition which will be on display in the wonderful spaces of the Theatre from now till 20th October 2017. 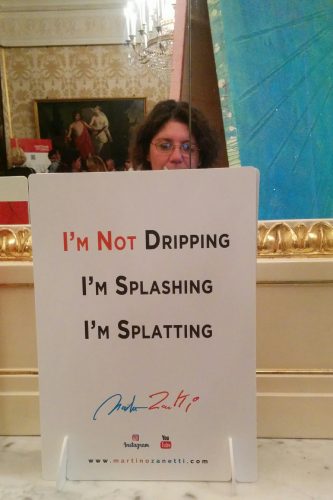 Who is Martino Zanetti? 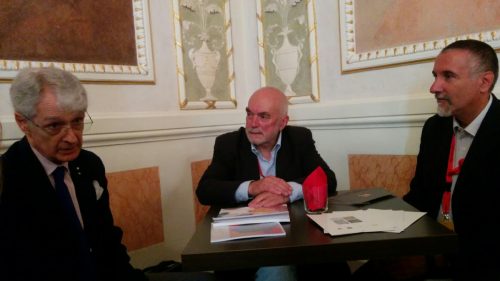 Martino Zanetti is the owner of the coffee roasting company Hausbrandt Trieste 1892 S.p.A. but he is also a well-established artist.

Born on 4 February 1944, the birth of Martino Zanetti was pretty particular, as he told us himself over a coffee in the beautiful Dante Room in the Fenice Theatre:

Mine was a memorable birth due to it taking place during a raid by the allied forces, in the office of my grandfather, a lawyer in the centre of the city of Turin.

From my mother and father I inherited the physical and intellectual legacy of Venetian merchants and artists, numerous on both sides of the family, plus a fighting spirit.

My artistic expression tends toward gigantism because of my innermost feelings. 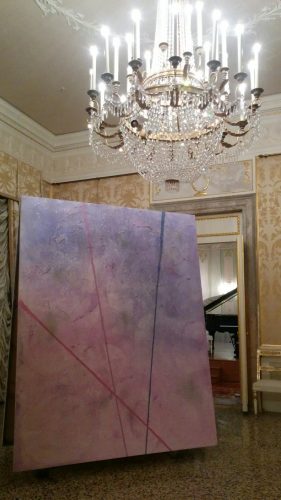 Space is uncontainable, and the iconic spatial-intellectual portrayal typical of the Western tradition, which focuses on classifying, organizing and imprisoning the image and the idea in an extreme way, fortunately and instinctively no longer influences me.

I have observed something similar to my sentiments in the Japanese Gutai movement, in which the use of materials and the artist’s movement overcame spatial impermanence to reach the spectator in a profoundly immediate and empathetic way – on a physical level too. 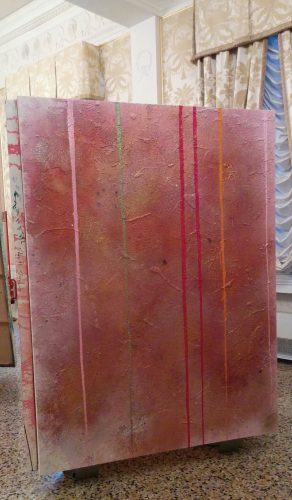 My work is often defined as action painting, but in reality this type of painting is contained in formulas that tap into Aristotelian philosophy, in which the Western man can find himself in the abstract image through underlying rationality.

Personally, I forget about masters and their theorems. Far from everyone and from schools, I simply interpret my happiness, my colours and sounds.

As I proceed with my painting, I can no longer imagine a picture enclosed in a frame: it is instead a fresco that starts from a base anchored to the ground, a continuum that also becomes sculpture and freedom…

I have noted the peacefulness I experience in executing my artistic expressions when I observe the simple spectator who grasps the joy of the creative moment.

The simplicity and smile of a child are worth more than a thousand intellectualisms.

But Martino Zanetti, is not also a very famous entrepreneur and amazing artist, is also a philanthropist, who donated the largest Italian collection of documents and letters from Gabriele d’Annunzio to the Vittoriale. The Vittoriale degli italiani is a hillside estate in the town of Gardone Riviera overlooking the Garda lake and it is where the Italian writer Gabriele d’Annunzio lived from 1922 until his death in 1938.

A passionate scholar of theater, painting, architecture, music and various artistic experiences, Martino Zanetti has been fond of the works of D’Annunzio since his youth and became the greatest collector; both of original edited works, of critical historical texts on the character and finally of autograph texts. Over three thousand sheets including the most important letters of education and maturity and “La vita di Cola di Rienzo” in the first script autographs.

It was real honour for me to get to meet such an eclectic man: a true inspiration! Someone who can be a very successful business man while maintaining his artistic talent and also a great collector of art is not very common in our world!

If you are in Venice, make sure to pay a visit to the Fenice Theater and to view the wonderful works of art of Martino Zanetti, you will not regret it!

CAFFÈ FLORIAN: WHERE DRINKING A COFFEE IN VENICE IS A RITUAL