When is the Venice Carnival on?

The Carnival of Venice is one of the most famous annual events around the world. The Carnival of Venice, if not the most impressive, is certainly the best known for its appeal and mystery that it continues to hold, even now, after 900 years from the first document that refers to this famous festival.

It is an event with a broad international appeal. Every year, thousands of people, pouring in from all over the world, take part in this event, driven by the desire to socialise, dressed up in costume, taking over the small alleys and squares of the city, in a fantastic dimension that only Venice can offer.

In Venice, the Carnival takes over the entire city, and it is from this and from its history, that several initiatives are born, offering fun and entertainment to everyone: shows, games, gran balls and parties – a unique opportunity of meeting new people and have a great time.

Among the narrow streets of the beautiful city, for about 18 days, there is a continuous representation of theatrical joy and playfulness. All in masks to celebrate the charm of a world of dancing, jokes, and exclusive gala romantic encounters.

Living the Venice Carnival means participating in the “Festival” and its rituals: from the oldest, such as the famous Flight of the Angel and the Marie parade to some new ones, like the various costume balls. In Piazza San Marco there will be plenty of opportunities to celebrate Carnival with dances and parades of masks.

The Beginning of the Venice Carnival 2017

On Saturday 11th Feb from 6pm till 8 pm the waters of the Cannaregio Canal will come alive with a water parade of lights, music and special effects marking the official opening of the Venice Carnival 2017.

On Sunday 12th Feb, all the local Venetian Rowing associations will parade in costume along the Gran Canal bringing the Carnival to full swing!

Festa delle Marie – The Parade of the Marie

The “Festa delle Marie” recalls the annual tribute which was offered by the Doge to a group of beautiful and humble Venetian maidens: the dowry for their wedding.

The “Festa delle Marie” is a unique opportunity to admire the costumes of the Venetian tradition. It is the first part of a beauty contest which is organised for the duration of the Carnival (12 girls are selected in the preceding weeks) and culminates with the proclamation of Maria of the Carnival, in the afternoon of Mardi Gras.

The prize: the Maria of the Carnival will be the Angel coming down from the bell tower of St. Mark in next year’s Carnival.

The arrival of Marie on the stage of St. Mark takes place around 16:00 and it is the final part in a parade that starts from Castello at 14:30.

Il volo Dell’Angelo – The Flight of the Angel

The Flight of the Angel is the most spectacular event of the Venice Carnival and most probably the most photographed, admired and filmed by all international television stations.

An incredible show: everyone holds the breath and looks up at the beautiful angel coming down from St Mark’s Campanile slowly making her flight to the doge in Saint Mark’s Square.

The Flight of the Angel, wind permitting, starts at noon, after the last beat of the Campanile.

Before and after the square is animated by jugglers, historical re-enactments, and of course a great deal of beautiful masks parading on stage.

Every day the stage of St. Mark’s Square is home to the big parade of masks with participants from around the world: an extraordinary show that combines lots of creativity with parades of individuals and groups, dotted with theatrical performances and little shows of masked entertainers.

The Flight of the Eagle

Since 2012, the last Sunday of the Venice Carnival 2017 coincides with the “Flight of the Eagle” from the Campanile of San Marco. The event, which follows the format of the Flight of the Angel, is among the most interesting shows in the square. Coming down from the bell tower this time will be a famous star belonging to the world of sports, music or entertainment.

The proclamation of the Maria and the Flight of the Lion

Fat Tuesday, the last day of Carnival, the last day of celebration before the rigors of Lent. The Maria del Carnevale, winner of the competition of the same name, elected the previous evening is proclaimed and crowned by the Doge, on the stage of Piazza San Marco. It ‘s the most important title to which a Venetian girl can aspire because it is awarded not only to her beauty, but also her ability to impersonate and interpret the spirit of Carnival and the essence of Venice.

With the “svolo del Leon” the flag with the symbol of Venice and of San Marco goes back up to the Campanile, ending the Carnival.

One of the most sensational and amazing experiences of the Venice Carnival is to take part in a Masked Ball. Dress up in a typical Venetian Costume and for one evening feel like you have been transported back in time, enjoying the Venice of the old days.

The most enchanting and regal dance is the Ballo del Doge. The Doge was the regent of Venice, the most important authorities of the Republic. Il Ballo Del Doge is an elegant and worldly event, with guests from every country, some of them quite famous, who, for one night, hide under a mask and a traditional Venetian costumes. The dance, hosted at the Palazzo Pisani Moretta, is produced by Antonia Sautter. This year’s ball marks the 24th edition.

Another Grand Ball will take place at Palazzo Benzon on the Canal Grande, Venice in Love Grand Ball, organized by Atelier Sogno Veneziano.

At the Hotel Splendid you will be able to take part to various dancing costume events, including a Dancing Chocolate event.

The Hotel Danieli will host a Minuet Dance with a Dancing Master.

The Hotel Monaco & Gran Canal will also organize a series of masked dinners and balls throughout the Carnival.

The Gallery of Wonders is a dinner and ball which will take places during the Carnival at the Venice Casino. 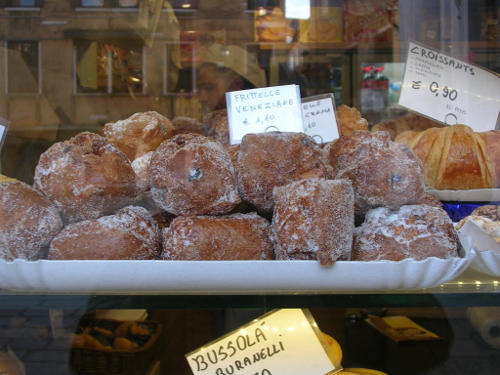 But you do not need to take part in a Gran Ball to enjoy the Venice Carnival 2017. You can just put a simple hand made mask on and wonder along the streets of Venice, joining the crowds, smelling the amazing aromas of freshly made frittelle and galani (and preferebly tasting them too), sipping on a hot thick chocolate in one of the many bars and cafes of the city.

Only one thing, as locals, we ask: respect our city! (see my list of things not to do in Venice, at any time!) If you respect us, we will respect you!

Reposted from @liveinveniceweek One week of live s

🇬🇧 / 🇮🇹 👇 The life of the optimist

"For every minute we keep our eyes closed, we lose

Reposted from @liveinveniceweek Wondering what Liv

Reposted from @liveinveniceweek What is the part o

So pleased to be able to start talking to you abou

"The best thing one can do when it's raining is to

“The rain is falling all around / It falls on fi