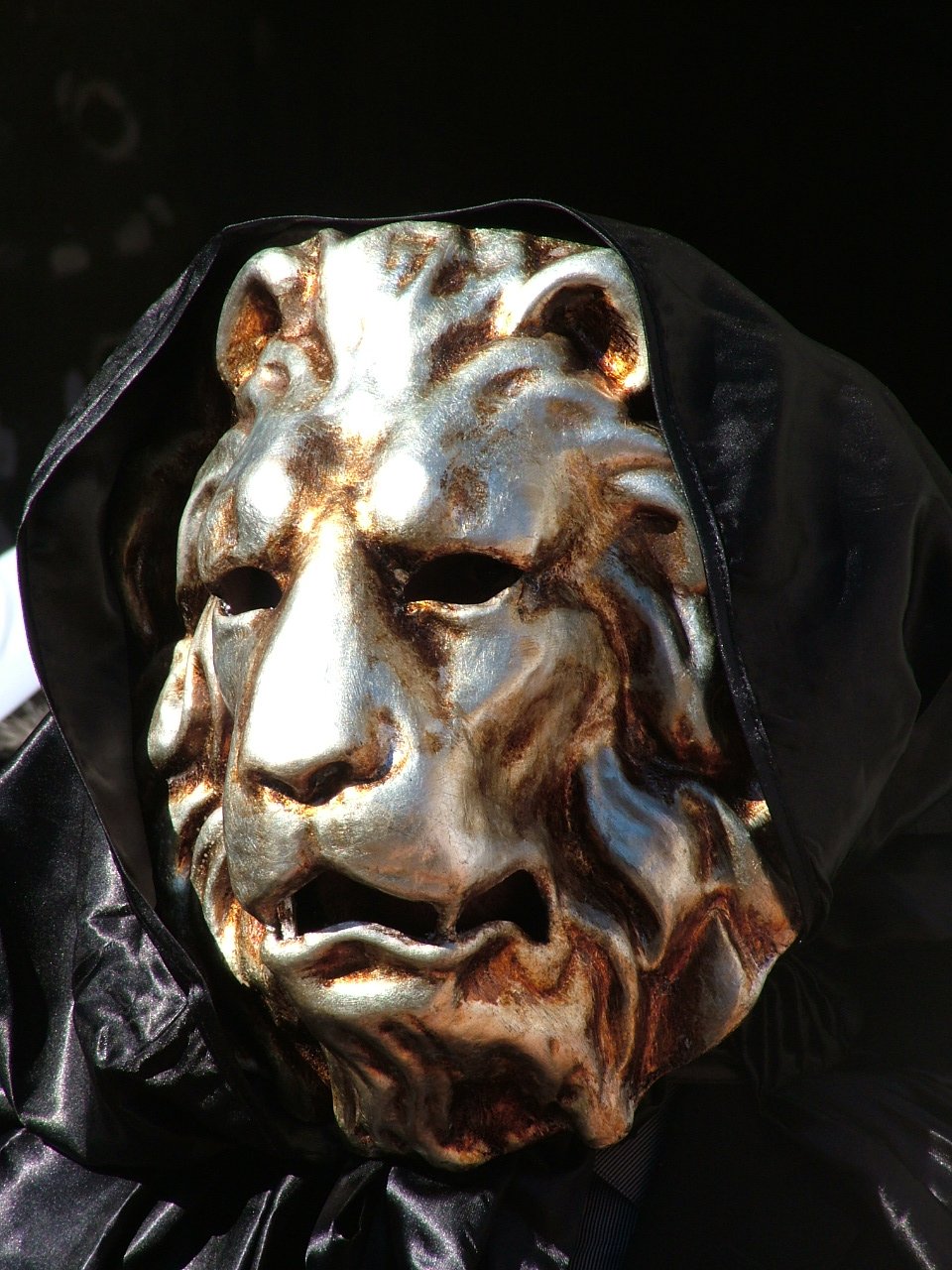 This post was written in 2010….9 years ago …..but still so true unfortunately! But I will get dressed up this year…watch out for me!!!!

Ah, here it is again, like every winter, the eternal question: shall I dress up or not for the Venice Carnival?

Today a collegue and twitter friend @casinadirosa ( www.casinadirosa.it ) asked me if I had anything written down on the Venice Carnival.  As I said no, that  I didn’t and that I had to get something prepared,  I started thinking of the days when I was young and free and pretty much into dressing up for the Venice Carnival. 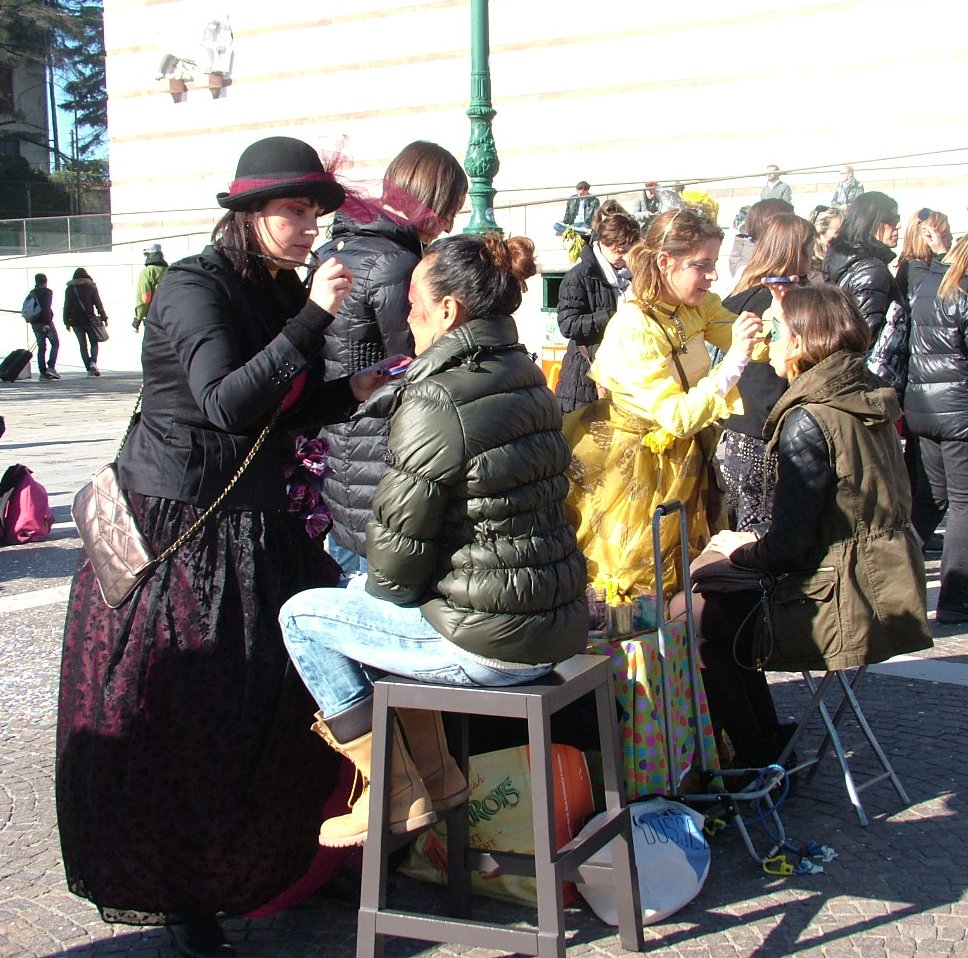 We are talking 80’s (so you can see I am pretty old), booming years here in Italy.

In those days the Carnevale di Venezia, as we locals call it, was the event of the year together with the Redentore and the Capodanno (New year’s eve).

The Carnival meant hours spent on preparing the right costume, frittelle ( o fritoe as they are called in Venetian – small fried dumplings) and galani (fried sweet thin pastry layers)  in buckets and an endless spin of parties to attend to. 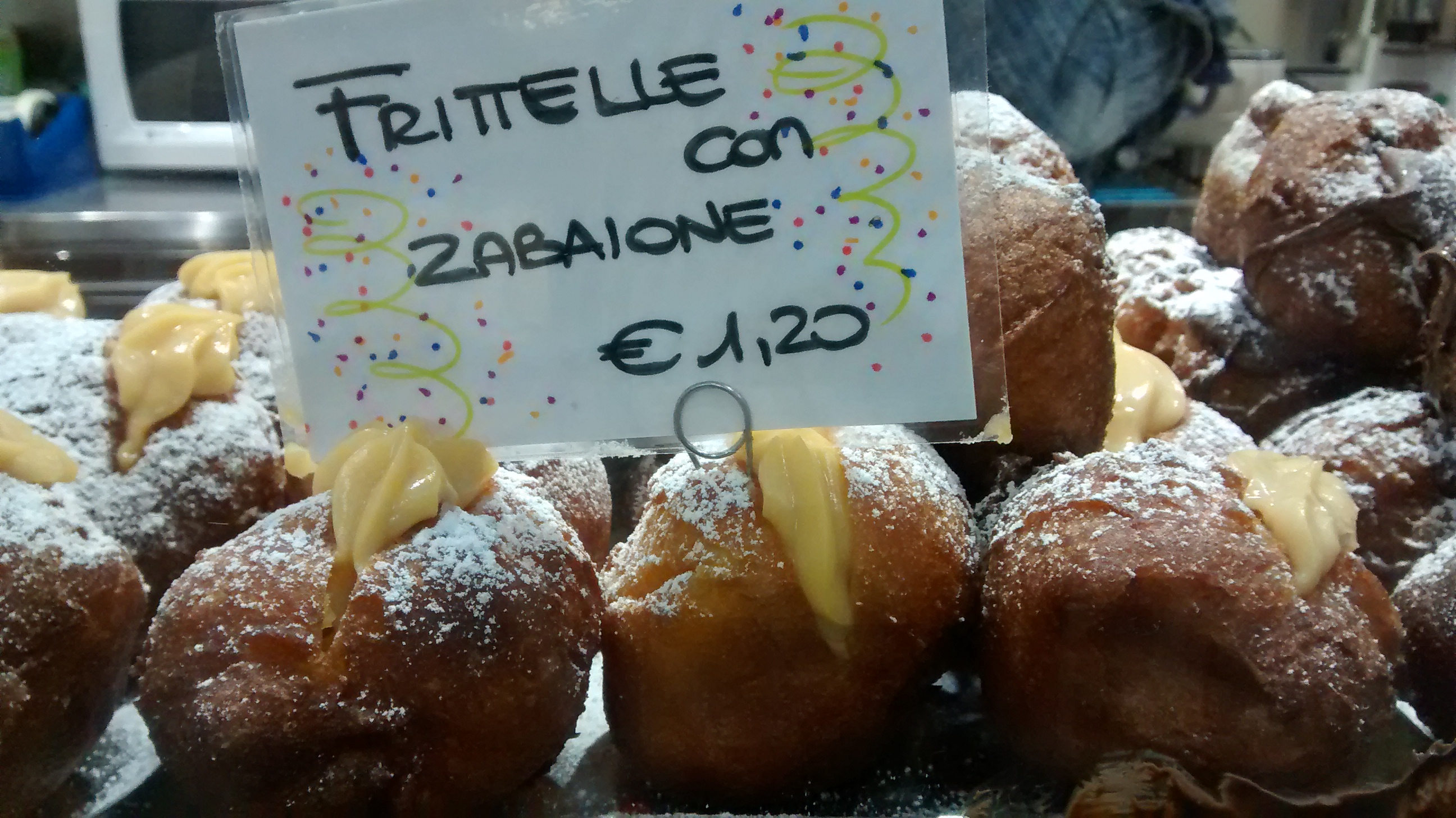 I come from the Venetian countryside and to take part in the Venice Carnival meant lots of fun, lots of cold, lots of food (not necessarily in that order). We had our local Carnival celebration too in all of our countryside towns, but the main event was in Venice.

The first memories of attending the Carnival go back to the beginning of the 70’s (I must have been around 6-7 years old). It was the period when in Italy cars had to travel on alternate number plates due to the world oil crisis.

My dad had the great idea of dressing me up as an Arab Sheikh (turban and all), to colour my skin dark, to draw a beard on my little angel face (yes, I was pretty as a child) and to give me a little car to drag around : it was his way of being ironic and participating into the Carnival spirit (by the way, I have never seen my dad dressing up, even though he loved to prepare my costumes). 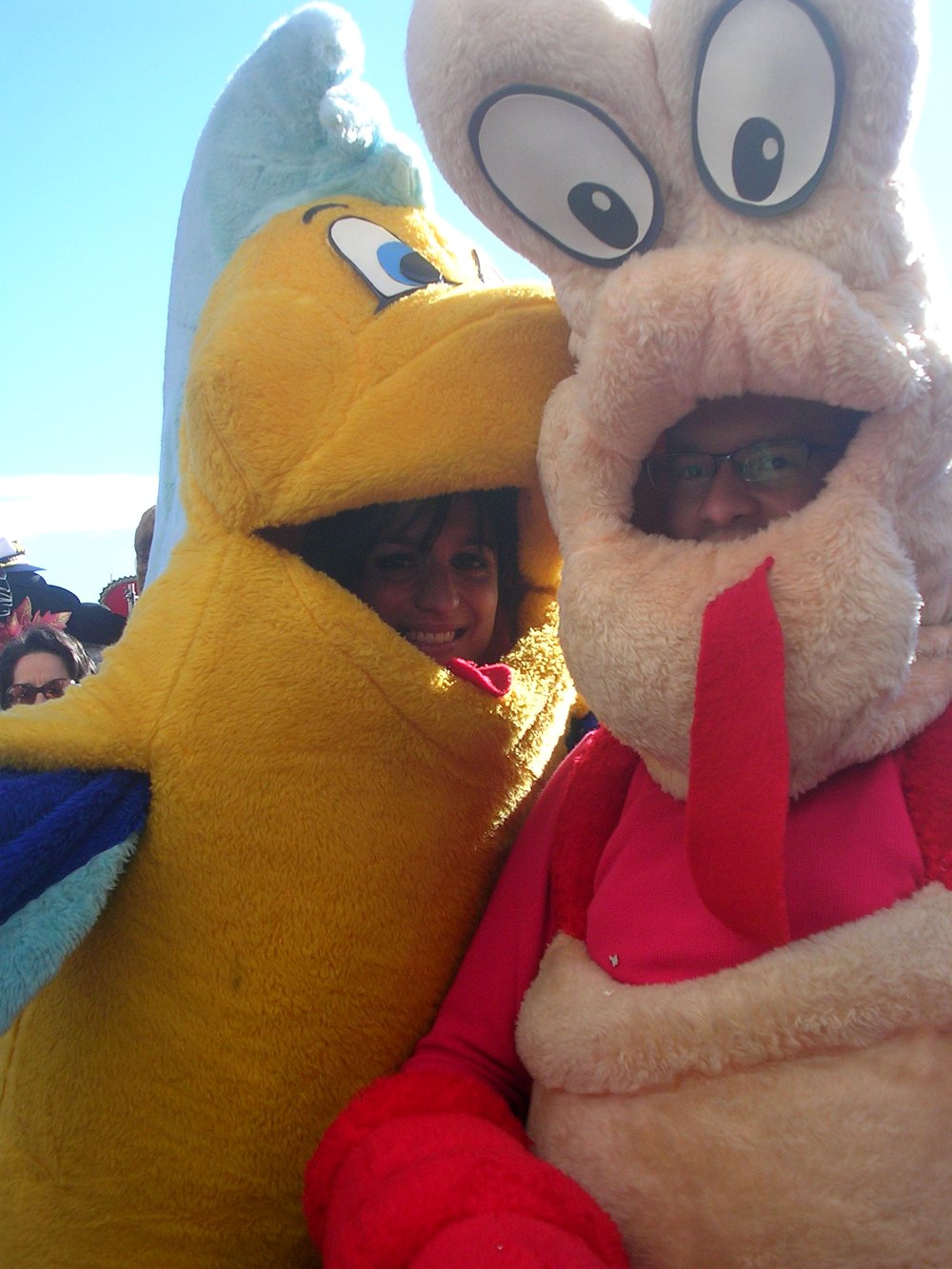 As we walked around the calli (the little venetian streets) people kept turning around and making funny comments: How is it going, Sheikh, run out of petrol, have we?

My dad loved it: that was the point of it all – to draw attention, to have the most unusual custom or mask. In the old days you would not even dream of taking part to the Carnival without a custom.

That was the spirit: DRESSING UP.

It did not matter how expensive or cheap your custom was, it had to be strange, unusual, funny, ironic, original.

There used to be those fancy and beautiful Venetian customs you still see today, but that was only in San Marco Square and usually they used to be prepared by people living in Venice. 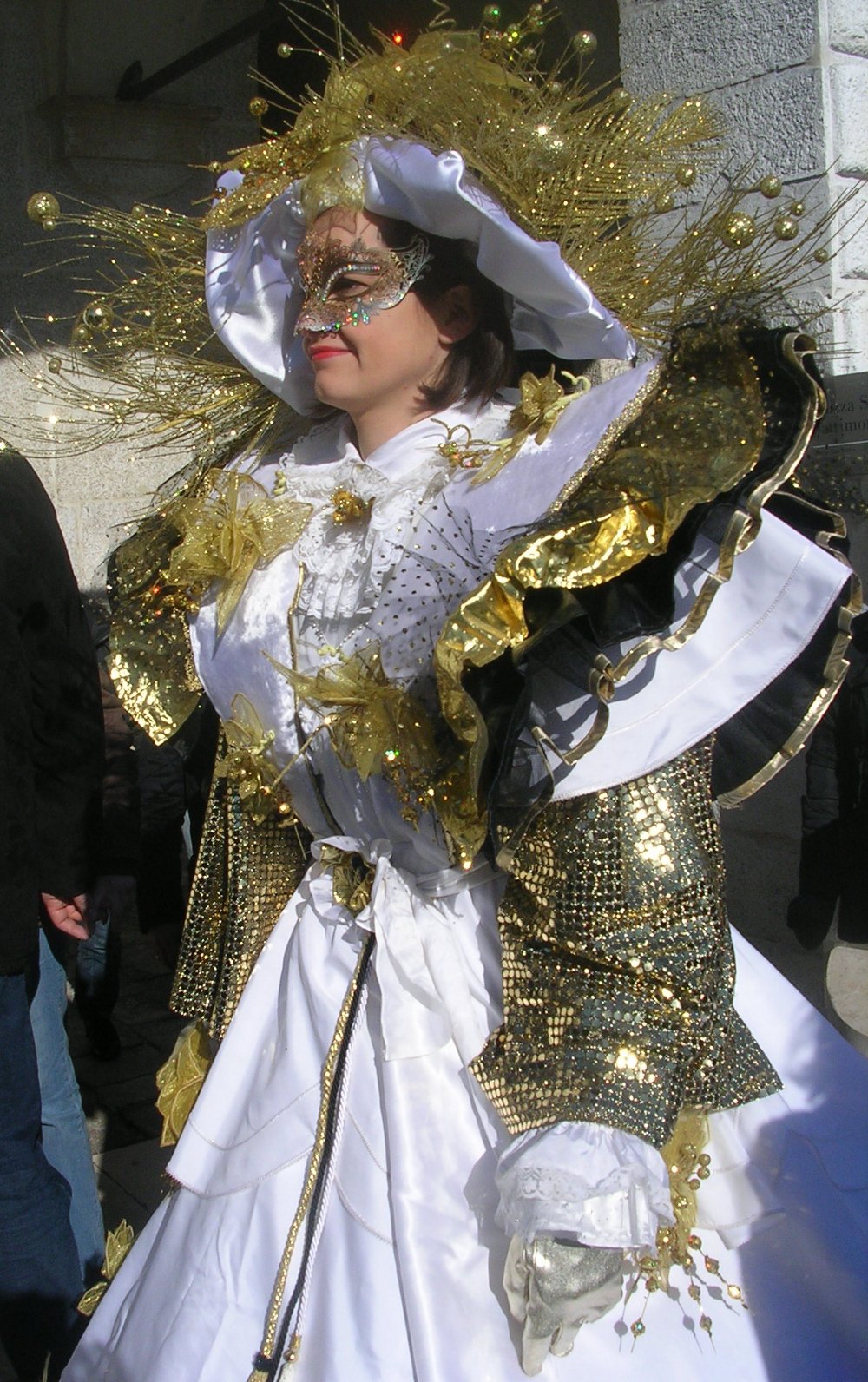 The Carnival was everywhere in Venice, every Campo or Calle was full of people drinking, eating, dancing, singing, just having a good time. It was not a Carnival for the tourist, it was the locals’ Carnival.

People used to organise themselves in groups and  prepare customs with a theme: you would see hordes of tribespeople (dressed in black top and black tights with a little straw skirt and a bone in their hair), doctors and nurses, Egyptians, Romans etc.  Lots of men used to wear women clothes and viceversa.  The old and the young, the grand-ma and the grandchild, everyone used to dress up.

In the 80’s all schools in Venice on shrove Thursday and shrove Tuesday will stay closed or open  half day, so the students could dress up and go around the city all day long.

People from the music school of Venice will walk around with their instruments (violin, guitar and flute) and just put up improvised little shows in all the little Campi around the city. You talked to everyone, you danced with everyone, you sang with everyone: a bit like Woodstock!

The only downfall was that the calli were too tight and many times there used to be little traffic jams and it was very hard to go through (and a bit dangerous, stampedes are easily set off). Also the day after shrove Tuesday, the aftermath to be cleaned off was incredible. But hey! That was Carnival.

Carnival was a people’s event, it was the way people could forget for a while about the bad things happening around (let’s not forget the 70’s and the 80’s were the years of Red Brigades -the worst terrorists ever in Italy).

Then in 1988-1989 the local new major decided that the Carnival had to be an elite event, that all the dancing and singing, drinking and eating was degrading for the city (obviously it was not bringing enough money) and it decided that people were not allowed to go and sit in the middle of San Marco and sing with guitars, that people were not allowed to dance and eat all over the Campi’s.

It was a very bad image of Venice! If you wanted to party you had to do it inside the Palazzi. Therefore slowly but surely  the local countryside people stopped partecipating at the Carnival, they stopped preparing the customs and looking forward to see one of the most amazing events ever. 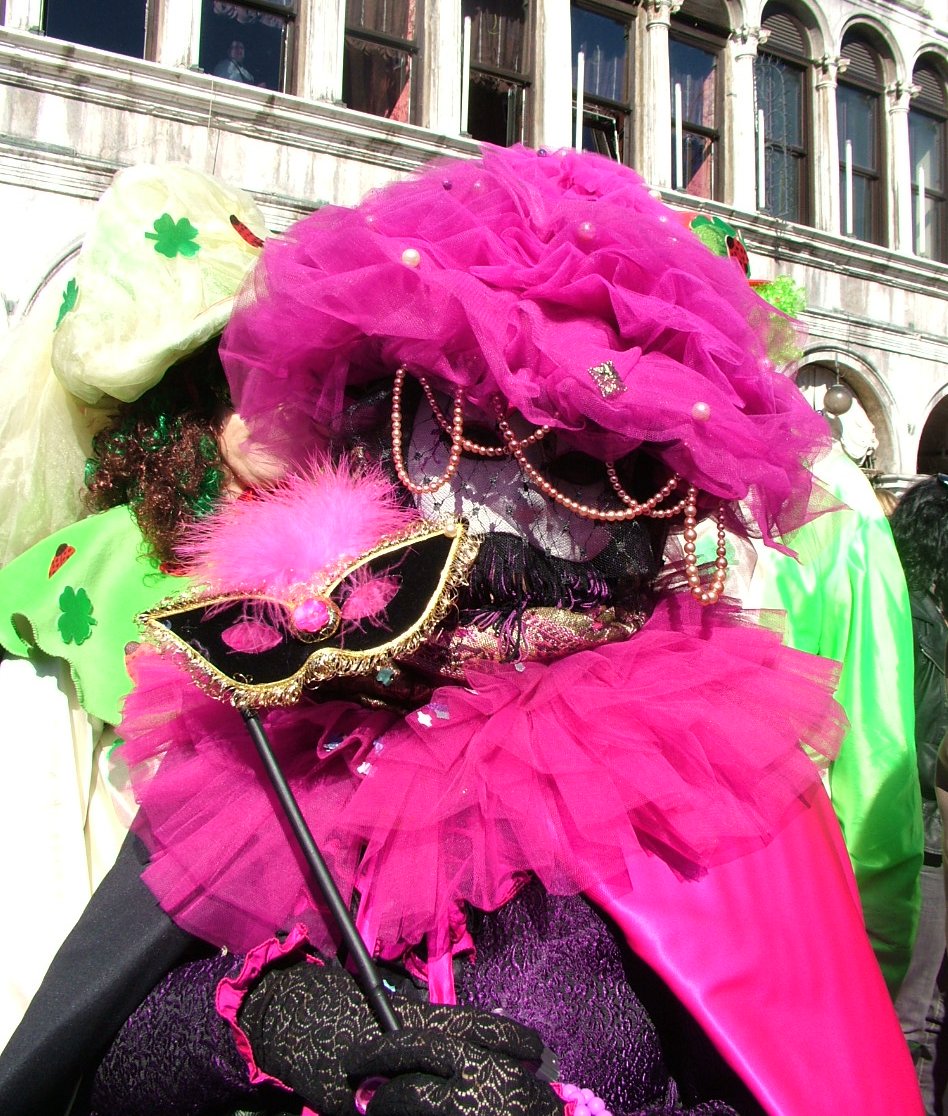 The Carnival became something that was not meant to be: an event for the rich! So here there are all the beautiful but please-do-not-touch-me customs with their elaborate designs, that take years to prepare but are in a way so superficial (by the way lately they are not even worn by Venetians, bu by tourists who rent the costums from rental agencies).

In the last few years, with the new sindaco Cacciari, it looks like the city administration is trying to bring back the spirit of the Carnival of the old days, when not only the tourists took part in this event, but all people from the surrounding towns.

It was such a shock for me in 2000 (just back from living in the UK for 12 years) when I went to the Carnival with my nice vampire homemade outfit (all family dressed the same) and find out that people were staring at us not because of the nice outfit, but because it was only us been dressed up! Even small kids did not wear Carnival costums and if they did they were expensive shop bought ones. What a dissapointment!

This year I have been asked by some real Venetian born friends to take part to shrove Tuesday in Venice. only one rule: you must dress up.  As they told me this my spirit lifted, a broad grin appeared on my face and somehow I was back in 1986 (the best Carnival ever for me) and the answer to the question was: YES, I SHALL DRESS UP FOR CARNIVAL THIS YEAR! 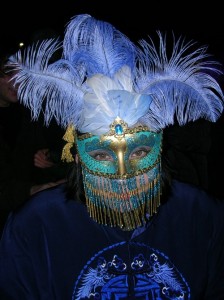 And I did get Dressed up, this is my mask!

Update: 22/02/2010    read my interview by BBC International about this post my quotes are in the chapter called  “Уличный праздник“ – it’s next to the photo of a lady in the red costume standing by the gondolas or listen to the Russian BBC Radio interview go to the 36 minutes 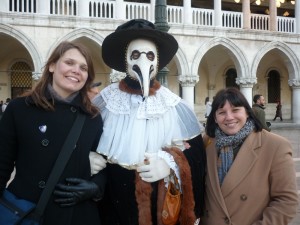 Top 10 tourist mistakes – What not to do in Venice