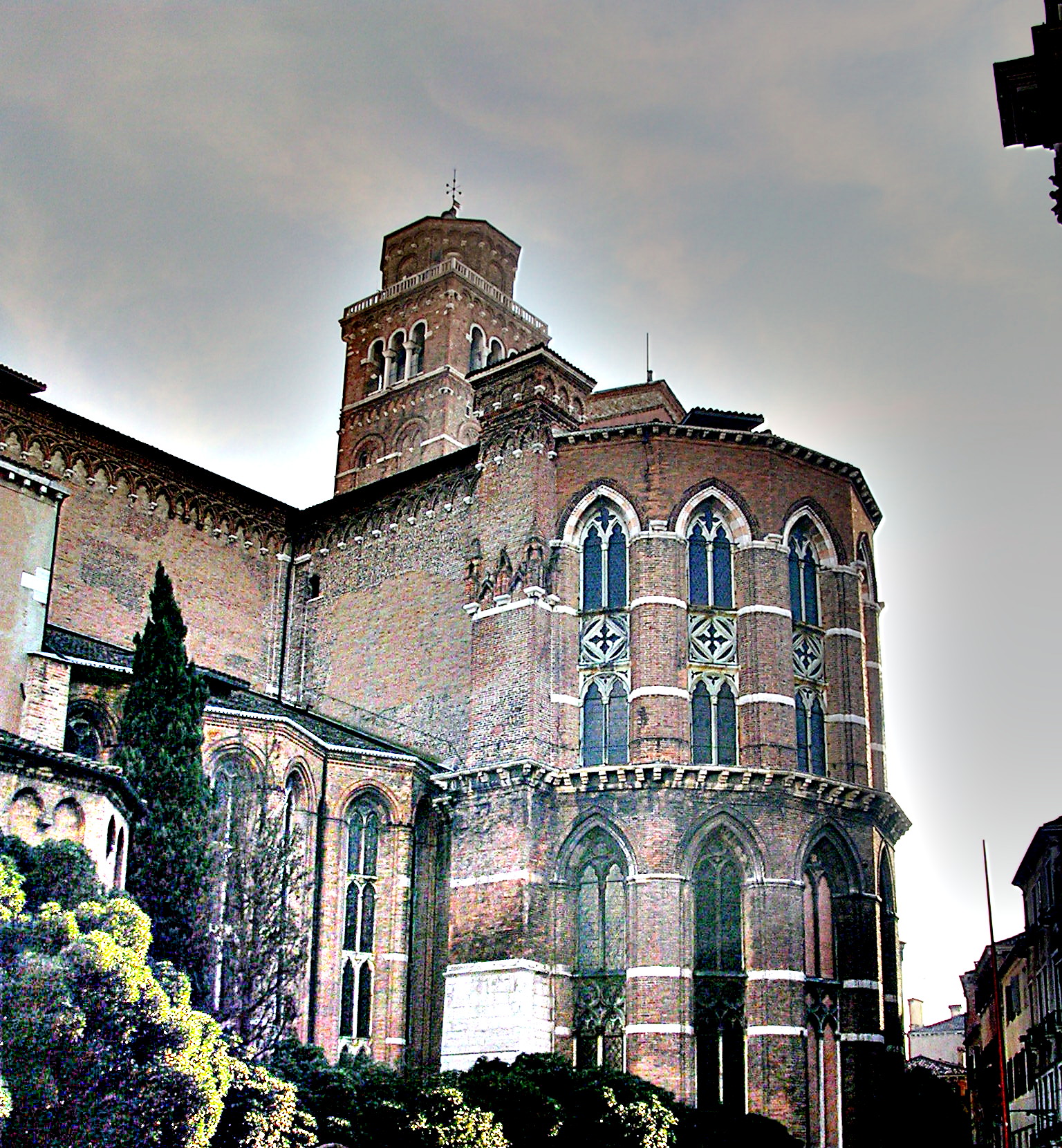 Venice Churches: Santa Maria Gloriosa dei Frari in Venice, a treasure in the middle of the Serenissima.

One of the biggest complex of buildings in Venice is composed by the church of Santa Maria Gloriosa dei Frari.

This massive building complex, commonly called Frari, dominates the area of San Polo with its essential Gothic forms and the large use of bricks.

The term Frari comes from the minor order of monk brothers of San Francesco, an order of monks who arrived in Venice around 1222 A.D. 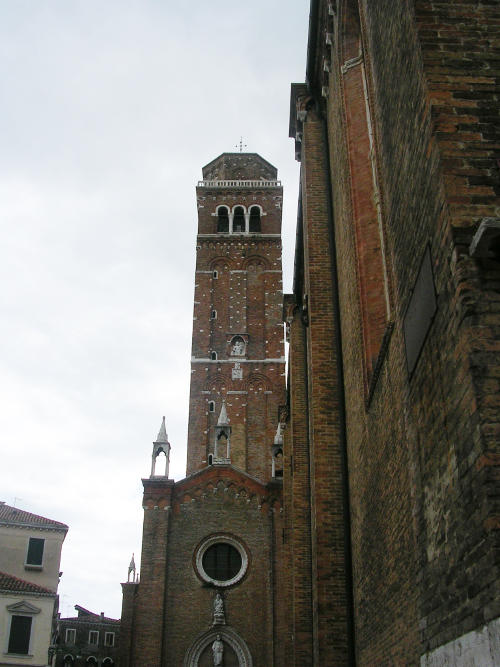 With the word Frari the Venetian refer to the church and the convent, one of the biggest building in Venice, Italy, together with that of Santi Giovanni e Paolo. The Franciscan monks gave the order to build it between 1340 and 1443, in place of a small church which used to be there.

The exterior is deliberately plain in accordance with the Franciscan emphasis on poverty and austerity.

The brick-plain Gothic façade contrasts with the more restrained façade on the Dominicans San Zanipolo, built at the same time. If you stand in the campo at its north-eastern front the one with the canal running through it  you can see the sequence of three entrances and three oculi windows with the stout campanile rising above the middle one. 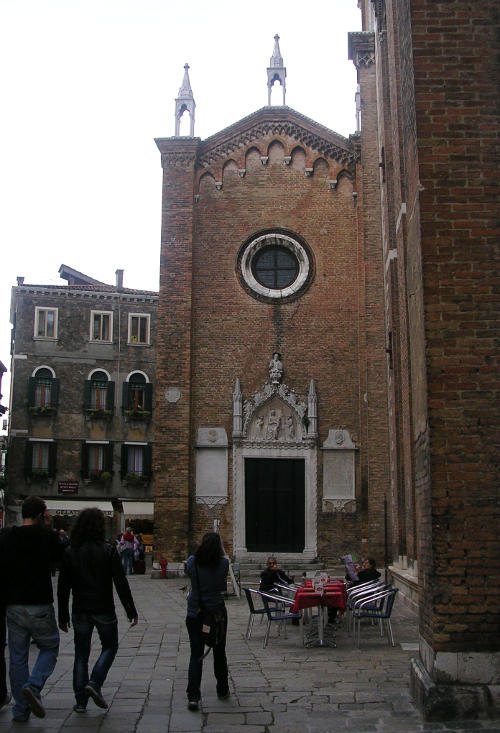 One of the most beautiful churches in Venice

The interior of this church astonishes the visitors for its magnificence and it is rich with masterpieces by Tiziano, Donatello and many more.

As you walk in, turn left and admire the monument to Canova, a marble Neo-classical pyramid created by Canova himself as a monument for Titian but never used for this scope. At the death of Canova it was used by his students in 1822 as a project for his tomb. His heart is preserved in a barely-visible porphyry urn behind that sinister open door, although the rest of him is buried in Possagno.

The twelve huge round pillars between the nave and the aisles represent the apostles, but the division of the nave and aisles is very unobtrusive, giving the impression of a single space dissected up high by tie-beams. Dominating the centre of the church is the dark wood of the monumental monks choir separated from the nave by a carved marble screen, said to be the work of Pietro Lombardo. 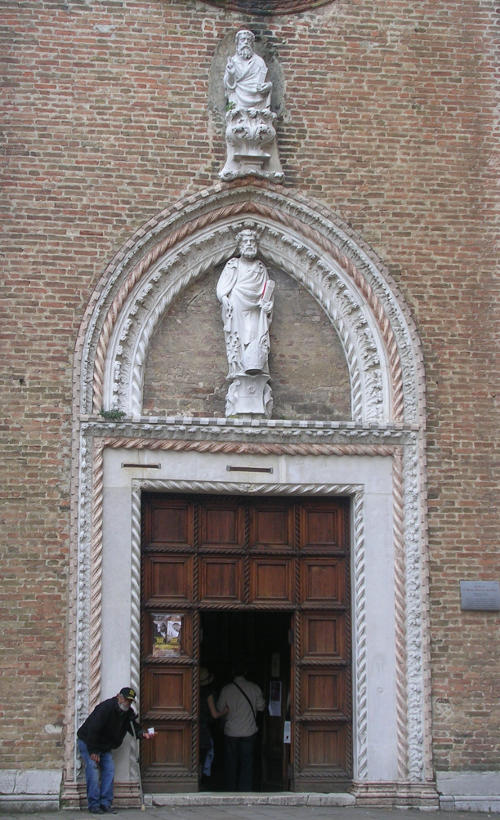 Right in front of you, you can admire the Madonna di Ca’ Pesaro by Titian, where the master painter used the light and the color in an amazing way.

At the end of the church, in Cappella Corner, you can admire a beautiful marble statue by Sansovino and on the Altare Maggiore another amazing painting by Titian stands out, the Assunta. Titians Assumption over the main altar dominates the church, and is said to be the largest altarpiece in Venice.

Ruskin said that this painting was ‘not one with the better for being either large or gaudy in color’ and complained of its excess of ‘fox color.’ The friars who commissioned it had their doubts too – telling Titian that his apostles were too big – but they stopped complaining when Charles V expressed an interest in buying it.

The belfry is the tallest one in Venice after Saint Marks’ one. Last but not least in the church the Trittico of Bellini is housed in the little sacristy. 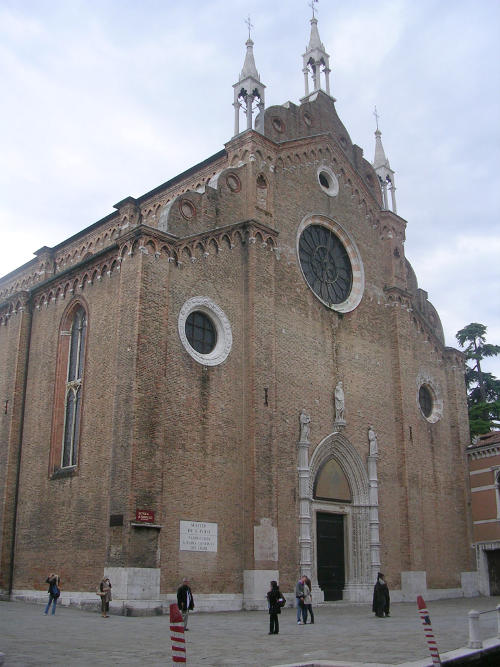 Next to the church stands the convent now turned into the Archivio di Stato, which houses millions of Venetian documents.

The church stands on a large square known as Campo dei Frari.

” Campo ” ( field ) is a Venetian toponomy to indicate that this area was originally grass covered, like the many other campi and campielli of the city. In front of the church runs the Rio dei Frari, a channel crossed by a bridge built in 1428 by the friars.

In the square, around the Basilica you can see the ancient buildings of the Schools, which were once brotherhood centres of religious and cultural life. 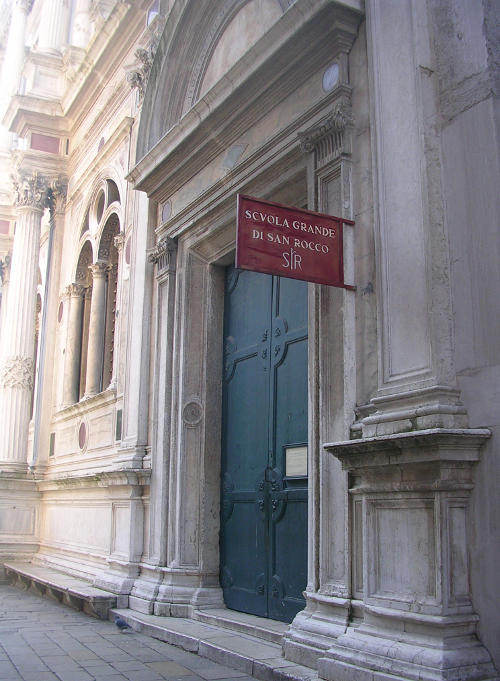 But the most amazing thing of this church is the calmness and peace which transpires when you enter and stand there. Never packed with tourists and groups, it always gives a deep sensation of peacefulness and high spirituality which pervade the visitor every time people enter the Basilica. 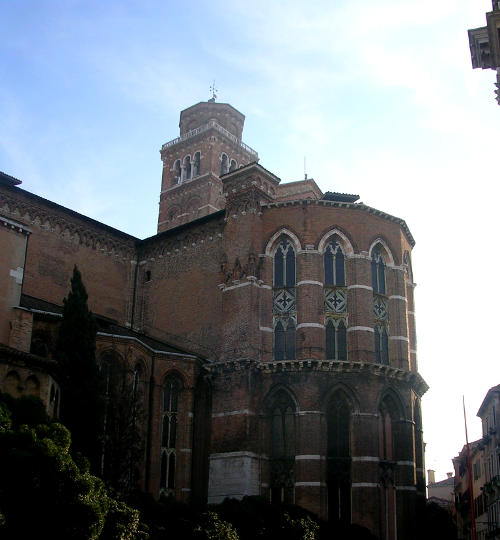 The back of Frari in Venice 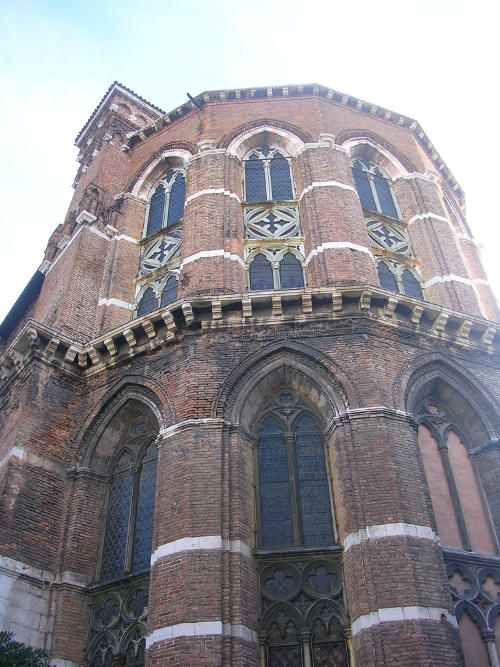 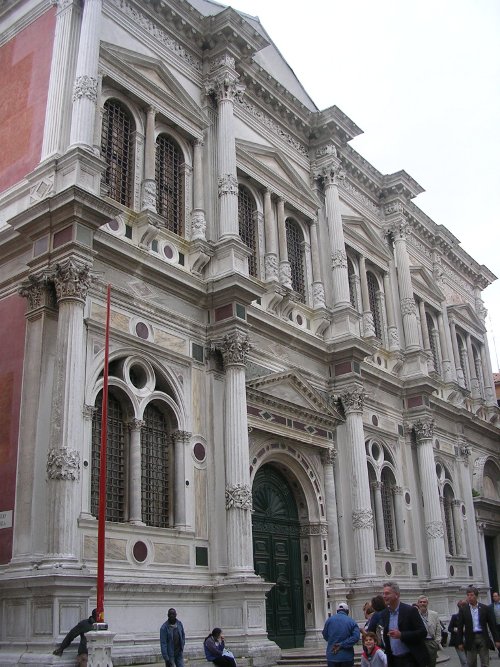