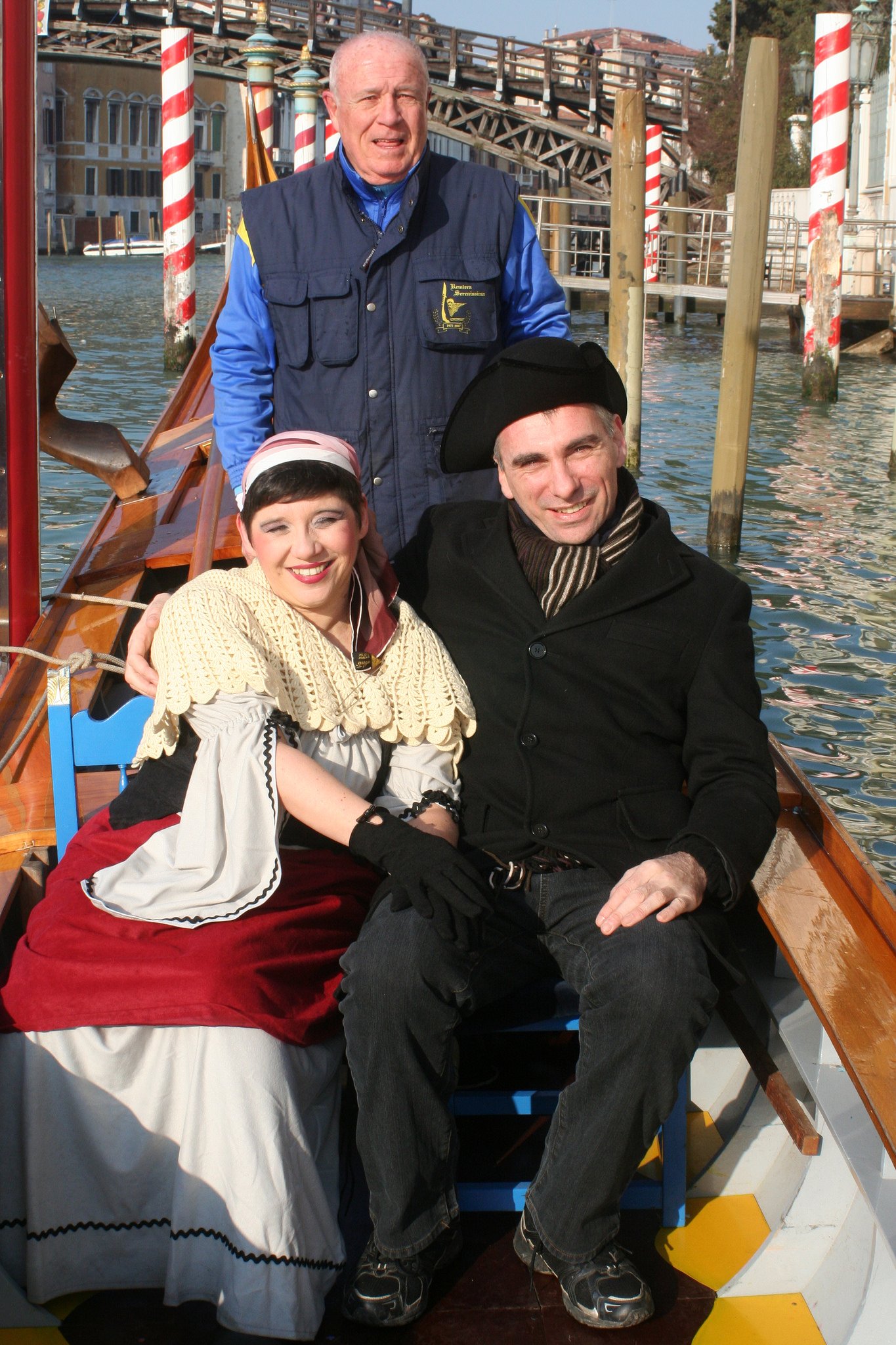 VENICE: WHEN DREAMS DO COME TRUE

On Saturday 7th February 2015 finally the Carnival of Venice managed to explode in an array of colours, sounds and smells.

With the Gran Costume Parade of the Festa Delle Marie and thanks to a drastic change to the weather (it was full blown gales and snowing on the Thursday before) the most delicious Carnival in the world was allowed to get started!

Thousands of people flocked to Piazza San Marco to admire the beautiful costume dressed girls which every year, as per tradition, present themselves to the Doge, to mark a centuries old tradition – you can see my post on the Festa Delle Marie.

I did not manage to go and see the show this year, but one of the best photographer I know, Mr Greg Vance, managed to snap some great pictures – see below – which clearly show the beauty and class of this event. 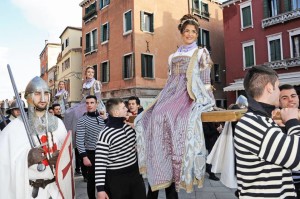 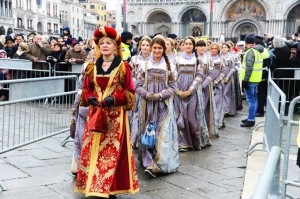 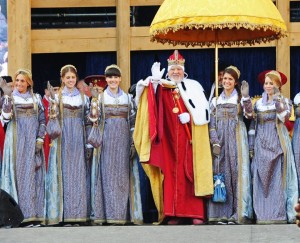 The Doge & the Marie by Greg Vance Photography

I was actually on a Food tour of Venice on Saturday and just I was walking into one of my favourite spots, Enoteca Da Roberto, the beginning of a lifetime dream finally started to come into reality. 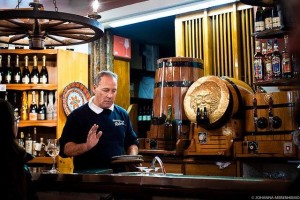 As I was talking to my guests about our Venetian Food and Wine, Roberto, the owner, asked me if I was free on Sunday and if I wanted to go with him and a friend on a gondola ride on the Gran Canal. He explained there was going to be a small Costume Regatta and they would be going as spectators and support for his Remiera. I think between the question and my answer the time lapse was probably a split second! And of course it was YES YES YES!!!!! Two seconds later I was calling my husband telling him (not asking him) we were going on a gondola ride on the Gran Canal in the morning and that he had to dress up for Carnival. To the first proposal I heard a huge “Great”, to the second only a grumble!!! But I took that for a yes!

And so the dream of a lifetime was taking shape!

Early on Sunday morning (bit to early for my husband’s liking) we set off from our house on the Riviera del Brenta, me flashing my brand new Tavern Wench costume (which I had just bought few weeks before in view of a costume party which will take place on 14th February – look our for photos), hubby only accepting to wear a black coat with a black traditional Venetian Tricorn hat; we set off for Ponte delle Guglie, the meet up spot. 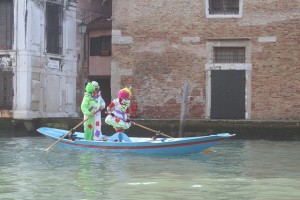 So, one bus journey and a short walk later, we were there in Fondamenta Cannaregio awaiting eagerly for our boat ride. As we were waiting for Roberto and his friend, we saw the small mascherete boats passing us by, with the men and women teams all dressed in Carnival costumes, one of the requirement of the Regatta. 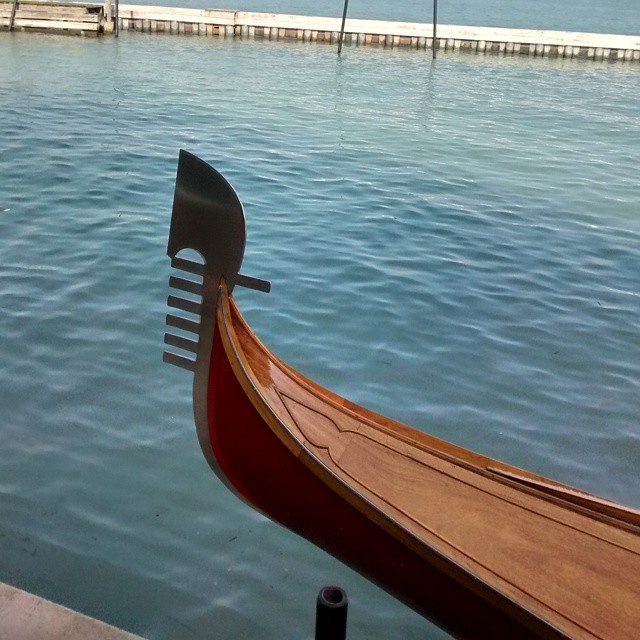 And then finally our gorgeous ride arrived!

So, after struggling a bit with my long skirts in descending into the gondola – I am afraid not in a very ladylike manner – we got to settle in our comfy seats (two pretty little blue chairs) and off we went.

Got to say the first minute or two I was a bit worried (I am a countryside girl after all) but thanks to the smooth rowing of Roberto and his rowing partner Giannantonio, the pretty calm water of the Cannaregio Canal and the sun shining, my fears pretty soon disappeared and I found myself in the middle of my DREAM!!

There we were, gliding along, like a King and Queen, tourists taking photos and looking at us with envy, as if we were some famous people – got to say, that was probably only because of my costume and hubby’s tricorn hat, but still, nonetheless, it was an amazing feeling! 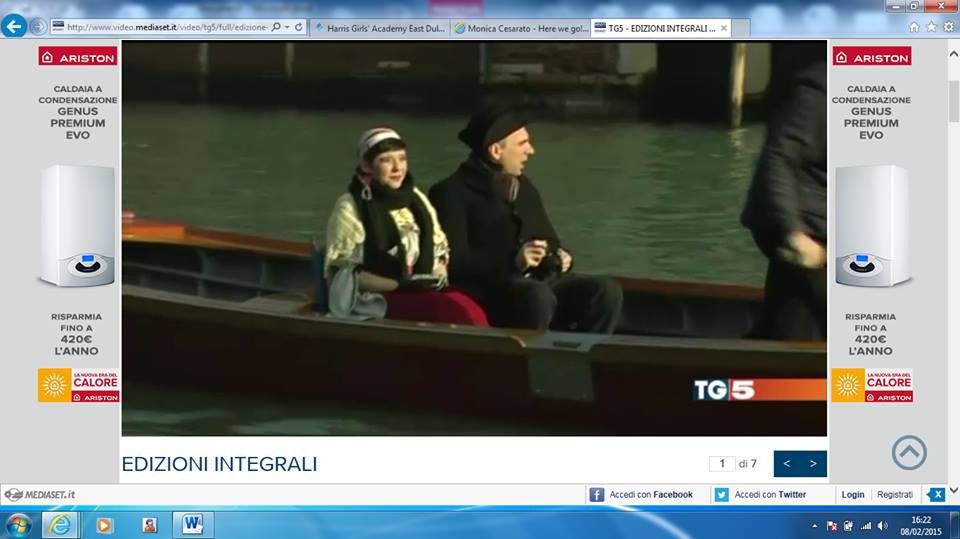 And off we went to the meeting place on the Gran Canal, San Marcuola. There we met all the mascherete who were taking part in this mini Regata de Carneval. Unfortunately due to various flues and colds, only few teams showed up, but it was still beautiful to see these small little boats racing through the water of the Canaeasso (Canalazzo in Italian), the nick name with which the Venetians refer to when talking about their beloved Canal Grande. 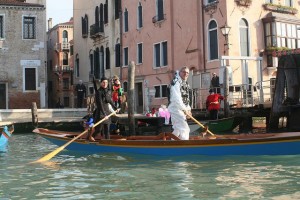 As the mascherete headed towards the starting point, Ca’ Giustinian near San Marco, Roberto and Giannantonio, who is the vice-president of the Remiera La Serenissima, rode us along the Canal Grande at a more sober pace, allowing us to soak in the beauty of Venice from the water level. Palace after palace, bricola after bricola: A SURREAL DREAM! 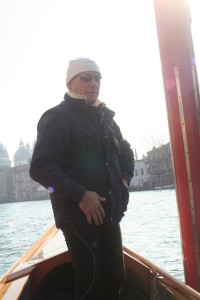 As I explained on one of my first blog posts, I am a countryside girl and I set foot on a rowing boat on the Gran Canal only in 2009 thanks to Nan McErloy and Renè Seigal of Venice Kayak, taking a ride in a sandolo, another typical Venetian boat. Therefore for me it is always so unreal to get to see Venice from a rowing boat level and no words can ever describe it – well maybe some: MAGICAL, UNIQUE, UNBELIEVABLE.

And when I thought the dream had come to its apex, well, there you are, it just got even better! A cameraman from one of the national TV Channels, the one belonging to Mr B., took some shots of us – we did not know it then it was TG5, I thought it was some small local TV. So you can imagine the shock when I started receive messages later on during the day from friends telling us they had just seen us on National TV!!!

Anyway, we eventually parked the boat on the side and watched the race take place. The little mascherete sped in front of us, the teams all tensed up, trying to stay ahead and win this friendly race! Each team had its own costume theme: angels and devils, a spider and the web, Egyptians, clowns: Bellissimo! 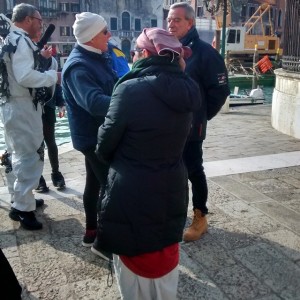 Immediately after the race passed in front of us, we decided it was time to go and do what us Italians know how to do best: eat and drink! So, we crossed the Canal Grande, parked the gondola near the Accademia and went off to have a drink to warm us up ( it does get cold sitting down!) and a frittella, the typical Venetian Carnival cake, just because!

Here we had a good chat with Giannantonio, who told us a bit about himself, the Remiera, the voga and gondoliers! Amazing what you get to find out if you talk to the right people! 😉 But all of this will be on another post 🙂

We then headed back to San Marcuola, where all the teams were celebrating with wine (of course), frittelle, pasta e fagioli (typical winter celebration dish!). We got to meet all the local teams, congratulate them and also found out the team of Remiera La Serenissima arrived 3rd. After a bite of two of yet more cakes and a glass of good local wine, Roberto asked us if we would like to see the Remiera and where the boats were stored!

I was going to say no, of course????? So, off we went, and after a beautiful slow ride through the waters of the Cannaregio Canal, we were there, in the open lagoon, the part which looks out towards Murano, the airport and Mestre. And to our delight and above all, our vogadori’s delight, the water was ” liscia come l’olio”, smooth as oil. And to everyone surprise, there was no one around: no vaporetti, no motorboats, no rowing boats!!! JUST US! Roberto said it had never happened to him before, not once in his lifetime, to have that piece of lagoon all to himself! He was as pleased as we were! So someone else’s dream came true too!

After a few laughs and jokes, some of which were pretty dirty (Venetian humour can be really harsh and rugged) – the perks of being a local is you know all the jokes and innuendo, so you can have a little banter as well – we made our way to the Associazioni Remiere Punta di San Giobbe, which is located in the North part of Venice, in the area of Sant’Alvise. 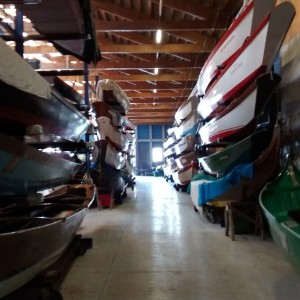 Here we got to see how the gondola is taken away from the water and placed in store – have a look at the video – we got to see all the beautiful boats of the various remiere who are located here, we got to see some very old old boats and we got to drink more wine, of course! But as I have said, I will talk in details about this in another post, all dedicated to Remiera La Serenissima.

And here the story of “a lifetime dream which actually took place” ends!

I wish to thank from the bottom of my heart Roberto Berti, the owner of Enoteca da Roberto, to be such a good friend and for allowing me to fulfill this dream making it even better than I hoped for! And Giannantonio Cedolin for all the stories, the information and the laughs – he is a countryside man like me, so I think he truly understood my excitement and awe when we sped along the Canalazzo! And thanks to my husband, who, poor thing, always gets dragged along, but always ends up having a good time! PS: he is actually going to take lessons on Voga Veneta, so look out for some more posts on this!

And thanks to VENICE, for being VENICE, no matter what!