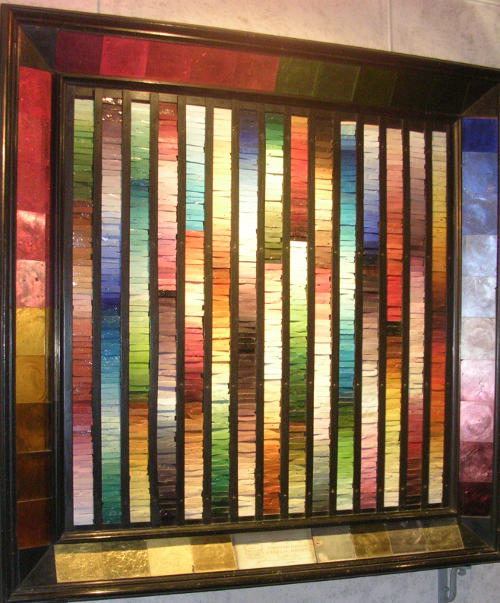 Thanks to Twitter over the last year and half I have been meeting  so many new, fascinating and interesting people which I have lost count of it.

But one person in particular I would like to thank for giving me the opportunity to visit one of the most amazing places in Venice, Orsoni Smalti Veneziani, and to meet its greatest mosaic master Lucio Orsoni.

This was possible thanks to JoAnne Locktov, author of Mosaic Art and Style, someone who I have come to appreciate both as a professional but above all as a friend. JoAnne and I have been chatting regularly over the net previous to her next trip to Italy and she was so nice as to propose to me to go and have a tour of Orsoni Mosaic Foundry when she was going to come over to Venice next.

As much as the Orsoni family is famous all over the world for their masterpieces and their mosaics, so little is known about  their workshop and work by the locals! I am a Venetian but I never heard of them till I started actually working on the net and finding interesting things about Venice.

But I am not the only one. While I was waiting to start my tour of the foundry outside Orsoni’s front door, few local people passed and someone said to a friend:- Hey, did you know this is a mosaic foundry? A certain Orsoni sells them all over the world! –  and the friend :- Ma va! (You are kidding), Non lo sapevo (I didn’t know). So, if at first I felt a bit stupid for been so ignorant about having such an important artistic family on my doorstep, I felt a bit better realising I was not alone. Then the door opened and I was introduced into the world of Orsoni.

The foundry is inside a courtyard at the back of Fondamenta di Cannaregio, in a little , let’s say, insignificant court of Venice (if any court in Venice could be called insignificant!) and it is surrounded by a high wall which hides very well the inside of the foundry (I can only imagine this was erected to preserve the secrets of the foundry, as so many other places in Venice did to guard their craft secrets!) 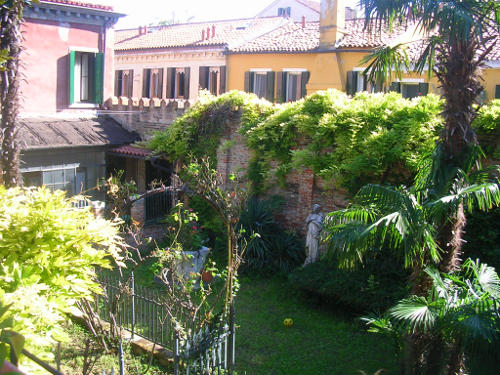 As you step through the door you are magically transported back centuries. The courtyard of this Venetian building is full of vegetation with palm trees, plants, flowers and pots with mosaic tesserae just scattered all over. As the door shuts behind you, time stops. A lovely metal staircase leads you to the lovely B&B Domus Orsoni which Lucio Orsoni himself has established, to allow the  students taking part in the mosaic classes to fully immerse themselves into the life of mosaic creation. The sun was shining, it was a splendid September morning and JoAnne was waiting for me, working on her laptop sitting on a lovely bench on the top of the B&B Terrace, overlooking the garden – or at least she said she was working, I just think she was busking in the sun 🙂 pretending to be working hard. 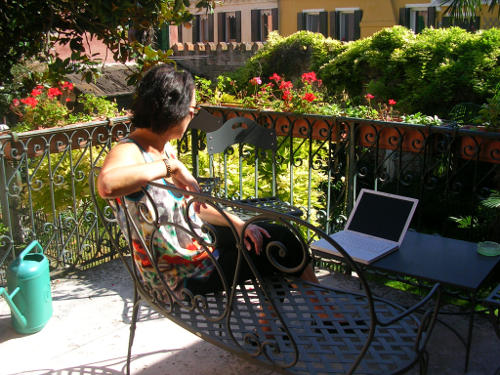 Anyway, as soon as I arrived, JoAnne was so nice as to give me a tour of the B&B and believe me, I was left speechless. Every single room (from the furnishing to the headboards to the bathrooms) of the Domus is decorated with mosaics. Everywhere your eyes turn there is a little work of art just sitting there, waiting for you to gently caress it and admire it.

I can just imagine the feeling of sleeping in a place like this and waking up surrounded by beauty! I repeat, I was left virtually speechless and considering I barely can stay more than 2 seconds with my mouth shut, that says it all! On the same floor of the B&B there is also the Mosaic Studio where the classes are held. Here the Master in Mosaic and the thematic classes in Portraiture and Micro mosaic are taught both to non-professional  and  professional mosaicists.

Orsoni offers 3 days, 5 days or 10 days courses where the students can learn the skills of mosaic work using the traditional hammer and hardie together with the unlimited palette of Orsoni enamels and gold. The maximum number of participant is very small, only 6 and this allows for a full immersion class. The intensive classes are taught by Antonella Gallenda, Lucios protégé since 1981. Unfortunately I did not have the pleasure of meeting Antonella, she was out that morning, but I know she has spent her entire professional career learning from Lucio Orsoni, creating masterful mosaic art and architectural installations such as the Peggy Guggenheim Portrait, which was inspired by a photograph of Peggy Guggenheim wearing her signature Surrealist sunglasses made for her by Edward Melcarth.

After visiting the first floor of the B&B, JoAnne took me downstairs, where the family has its offices and a beautiful large room displaying some of their most beautiful mosaic. The room is divided in two parts: one side with the modern mosaics, which have made Orsoni famous all over the world;  the other side is more like a little museum, with all the family memorabilia on display, from the first mosaics which Angelo Orsoni, the founder of the foundry, created, to some of the old machines dating back to the 19th century which were used to cut the tesserae and to press the gold leaves. 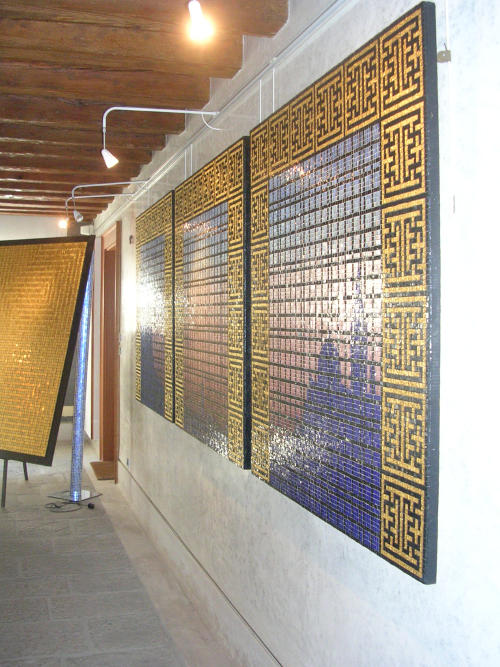 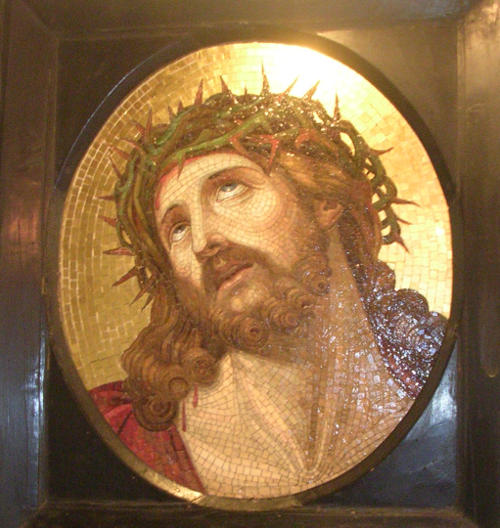 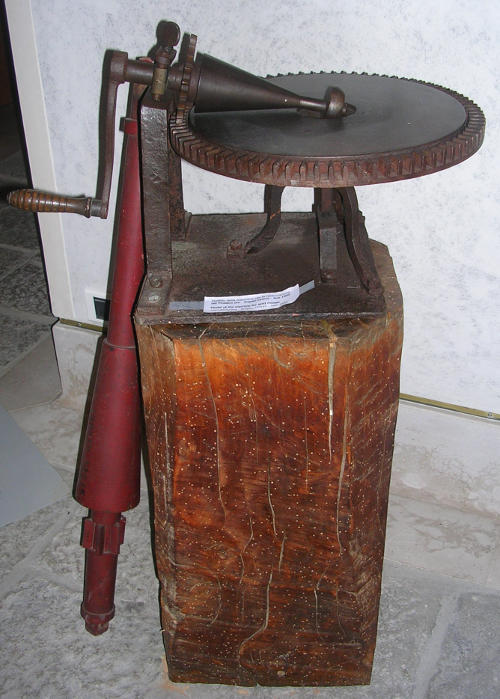 And as JoAnne was taking me through the history of the family, the man himself , the maestro Lucio Orsoni, stepped into the room. I felt so embarrassed and uncomfortable, more so since my dear friend introduced me as a writer (which I am not)!

Anyway, Lucio Orsoni is a lovely distinguished man, a man who radiates nobility from every pore, simply by his standing and his gestures. In Italian we say la classe non è acqua (Class is not water) and in his case this is definitely true. So, after Joanne had a short chat with the master himself, we finally went to visit the foundry, where the hard work takes place. The furnaces, where the smalto is melted and shaped and coloured, were incandescent. The heat was unbearable, I really have no idea how those guys can work with such a heat. This is the beginning of a long process of melting, shaping, cutting which eventually culminates with the laying of the tesserae and the creation of works of art. 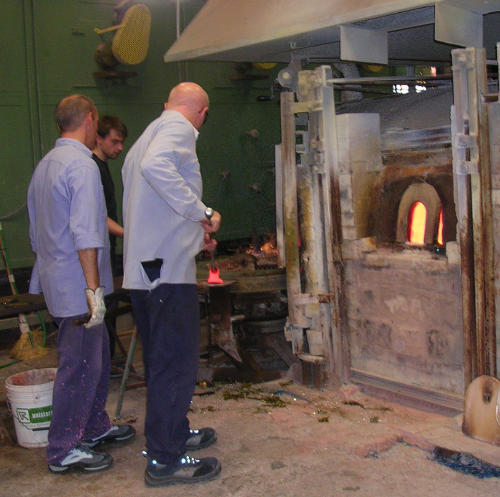 The tesserae are small square pieces of glass used to make a mosaic. In the furnace the enamel tesserae called Smalti are prepared by adding crystalline material (corpo) and coloured material (anima) to the colourless or coloured fused glass. One of the people who melts the glass very kindly showed us the materials which are used to produce all of the different colours. We also saw them preparing 24k gold-leaf tesserae. These gold leaf pieces consist of a glass support layer (usually see-through). The 24k gold metal leaf is then sandwiched between the support and a thin protective glass layer .

We actually saw them in the process of melting the gold and sandwich it together. Joanne told me I was very lucky to be able to see this, since it does not happen often and usually the process is not shown to visitors! Very exciting! Next to the furnace there is the laboratory (as I call it), the place where the glass sheets are cut into small pieces which are then used to create the mosaics. The girls who cut the tesserae are really skillfull and the can cut kilos upon kilos of those things in just few hours! After the furnace I was taken to visit the most interesting (from my point of view) place in the foundry: the library of colours! 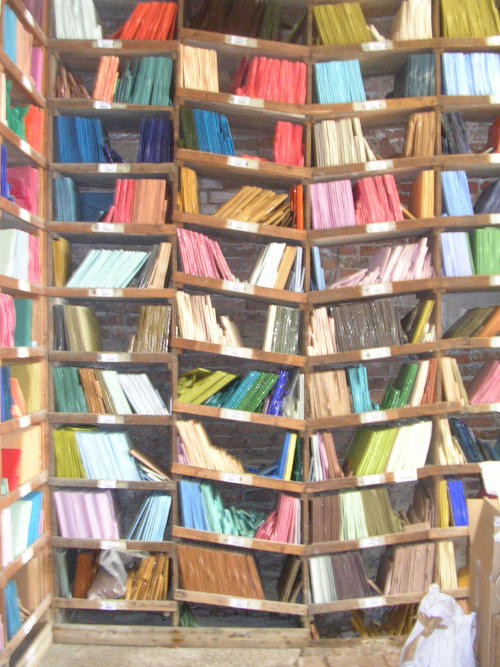 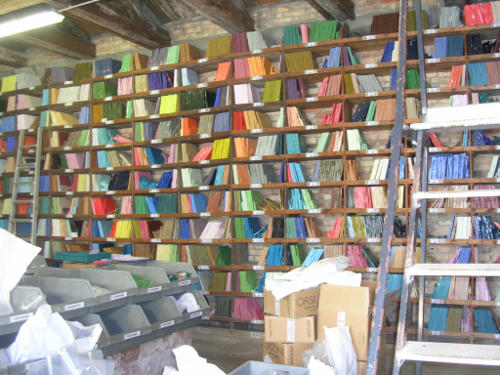 It is literally a massive area full of shelves stacked up with rows and rows and rows of sheets of coloured glass which are then cut into tesserae.  Some of the sheets have been there for decades. The range of colours is incredible: coral,lavender, aquamarine, cobalt. You name it, it is there! If it is not there, you tell them and it will shortly be! It felt like I was in an old mage alcove, surrounded by all the dazzling colours which the world can offer! I was expecting any minute an old man in an old renaissance custom to appear at the corner of a shelf! This place has been like this since 1888 and you can fell it, smell it, taste it!

This room oozes history just like a baba oozes Rhum when you bite it! This room is Orsoni! With this my tour of Orsoni Smalti Veneziani finished. Soon after JoAnne and I went for a lovely lunch in Osteria Al Timon, Fondamenta Ormesini, just next to the Jewish Ghetto, where we had some lovely cicchetti and spritz. 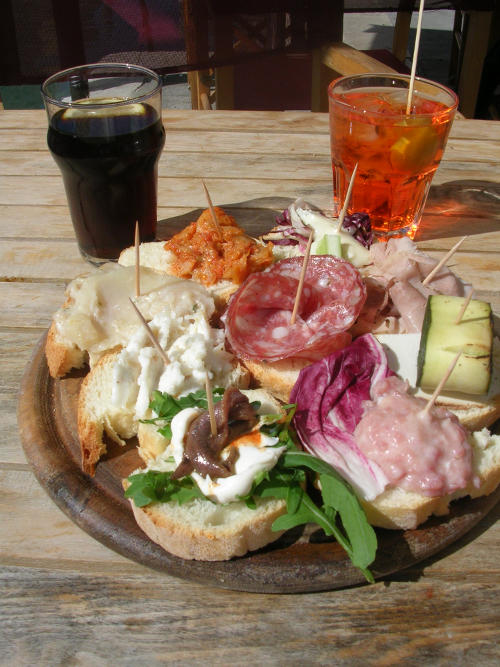 I cannot thank enough JoAnne for letting me into this fantastic world of talent, mastery and passion which characterises the people who work with Lucio Orsoni and his family. And if you are planning a visit to Venice you must include a nice mosaic class in your trip, you will not regret it!