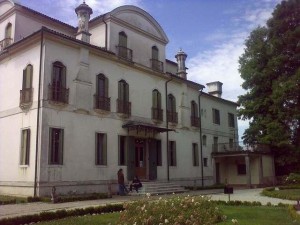 VILLA E BARCHESSA WIDMANN IN MIRA, JUST OUTSIDE VENICE: I find myself always talking about Venice, but today I decided it was time to talk about the Terraferma (the inland) and about what it can offer to Venice’s visitors.

During the Middle Ages Venice looked at the water and the sea as a mean to expand and gain power, but when other powerful neighbours started to push on Her, menacing her territories and economy, the Republic of Venice had to start looking after the inland territories.

It gave life, in this way, to a land State , capable to guarantee political and military security as well as providing an easy supply of food.  It was the beginning of the 15th Century  and since then the history of Veneto and the Riviera del Brenta undertook a deep change.

During this period the rich merchant Venetian families started to buy plots of land in the area which is now known as the Riviera del Brenta, which is along the Brenta River. This was the ideal place for the rich merchant to invest their money, since it was the direct water link between the city of Venice and the city of Padova.

Along the river the rich Venetian families bought large areas of land which they turned into intensive agriculture and where, by the water, they built their countryside villas and where they used to spend the hot summer month, away from the stifling heat of Venice. During the 1600 the area become a fashion summer resort, where the rich merchants competed to build the most beautiful villas.

From Malcontenta to Strà, famous architects like Palladio, Longhena, Scamozzi and  famous painters as Zelotti, Tiepolo and Zuccarelli were called to design and decorate those works of art.
The most famous villa is definitely Villa Pisani in Strà, along with Villa Foscari La Malcontenta in Malcontenta and Parco di Villa Belvedere in Mirano.
But today I want to talk to you about Villa and Barchessa Widmann in Mira. 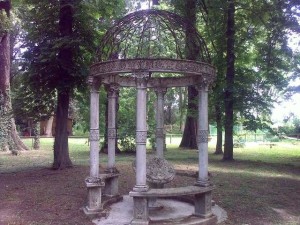 The 18th century visitor who, during the traditional Grand Tour of Italy (Casanova did this as well) sitting aboard  a private burchio (the typical local barge) would float on the Brenta from Venice to Padova, would for sure admire one of the pearls of late Venetian Baroque: Villa Widmann Rezzonico Foscari and its estate on the Brenta River.
The villa stands on the calm banks of the River Brenta, that as a mirror reflects the weeping willows and the limes.
The house was first commissioned in the early 18th century, but it was 50 years later with the Widmann family that the house assumed its present aspect. In this new guise the main part of the villa became the perfect setting for parties and reception for those rich merchant, during the Apex of Venetian History.

Two famous painters of the period were commissioned to decorate the villa: Giuseppe Angeli (1712-1798) and Gerolamo Mengozzi Colonna.
After changing many owners during the last two centuries, the villa now belongs to the Province of Venice.
As you enter the villa you can admire some beautiful frescoes by Giuseppe Angeli representing the Glorification of the Widmann family, using mythological figures like Mars, Mercury, Athena and Hercules.
At the north of the villa, stands the flourishing park. 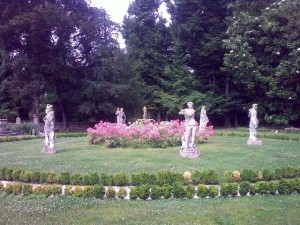 Entering the park you can notice many statues of the 18th century, in soft stone: they are water-lilies and cupids. 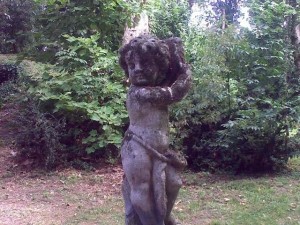 At the bottom of the park stand a romantic little lake created in the late 19th century on which many  bald cypresses stand up. 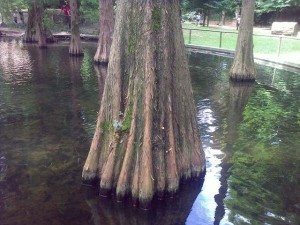 The cypress in the lake

Not far from the little lake, stand a stone gazebo, which has been for century the meeting point for lovers.

On the right to the building complex, at the end of the arcaded grange, stands the noble family’s oratory with some adjoining rooms for liturgical services.

In villa Widmanns you will also find the Tourist Information Point, where you will be able to gather all the information for staying or visiting Venice.

Opening times: November to March: 10am-5pm only on weekends and on public holidays.
April to October: 10am-5pm Tuesday-Sunday (closed on Mondays)
Entry tickets as of March 2010: euro 6

Hot to get there: Villa Widmann is located along the banks of Riviera del Brenta, 10 km from Venice.. It is served by bus 53 (Venice-Padova line, in  Piazzale Roma bus stop C4)
Nearest motorway exit: A4: Dolo-Mira?